Accessibility links
Interview: Chris Hardwick, Host Of 'The Talking Dead' Chris Hardwick might be the best example of how the nerds triumphed over pop culture in 2013. A standup comic and actor, Hardwick created the Nerdist podcast and hosts Talking Dead (a talk show that discusses The Walking Dead); now, his social media-centered comedy game show @midnight has been picked up by Comedy Central. 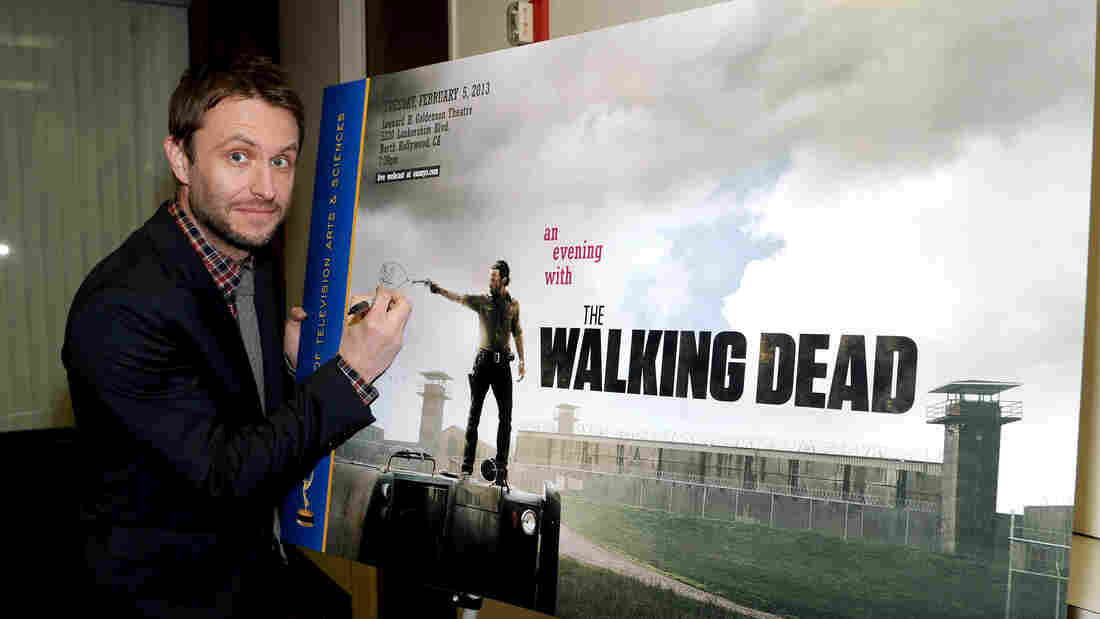 Chris Hardwick, the host of Talking Dead, autographs a poster for the show his show discusses: The Walking Dead. Frank Micelotta/Invision/AP hide caption 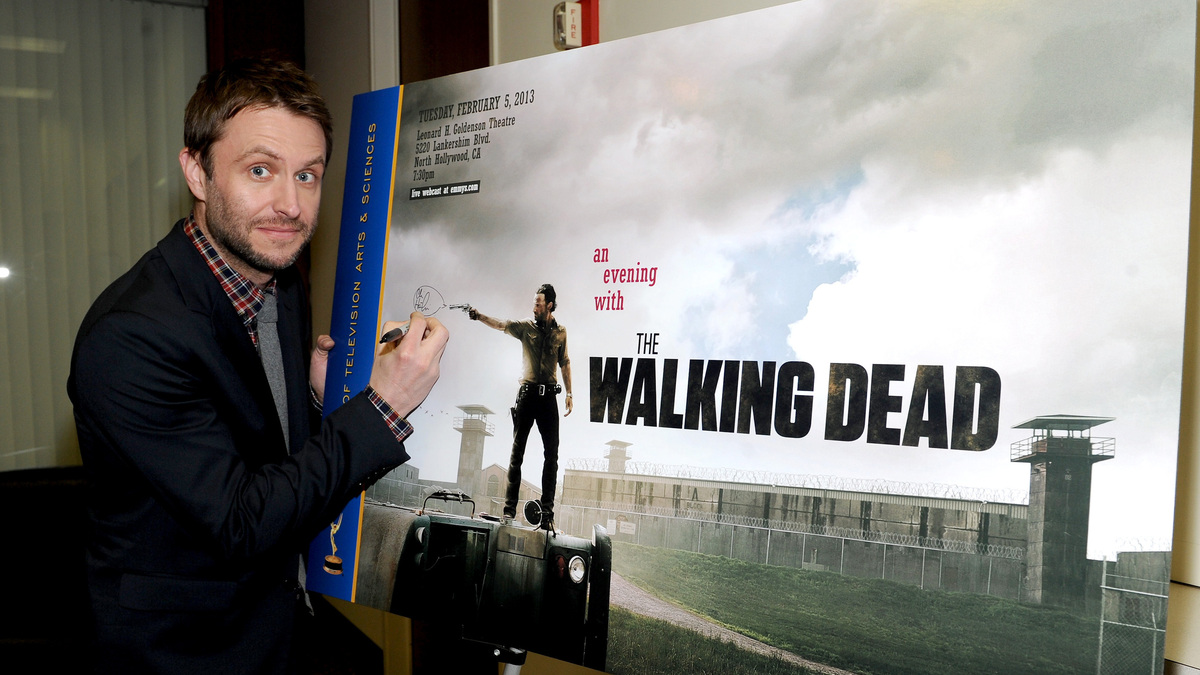 Chris Hardwick, the host of Talking Dead, autographs a poster for the show his show discusses: The Walking Dead.

Chris Hardwick could be the nerd king of television. Crown or no crown, no one is a better guide for TV-obsessed fans.

Hardwick's biggest gig is hosting Talking Dead, a show where he and his guests dissect the gore and heartbreak in each episode of AMC's zombie drama The Walking Dead.

"I'm just lucky that people need therapy after a show like The Walking Dead. That's what we provide," Hardwick explains. "We provide a comedown so you can get into bed and your brain stops buzzing."

Hardwick also hosted Talking Bad, helping fans of Breaking Bad process the final season of the most brutal show on TV. And his nerdy obsession with the Internet and pop culture led to @midnight, a game show on Comedy Central featuring comics riffing on social media. 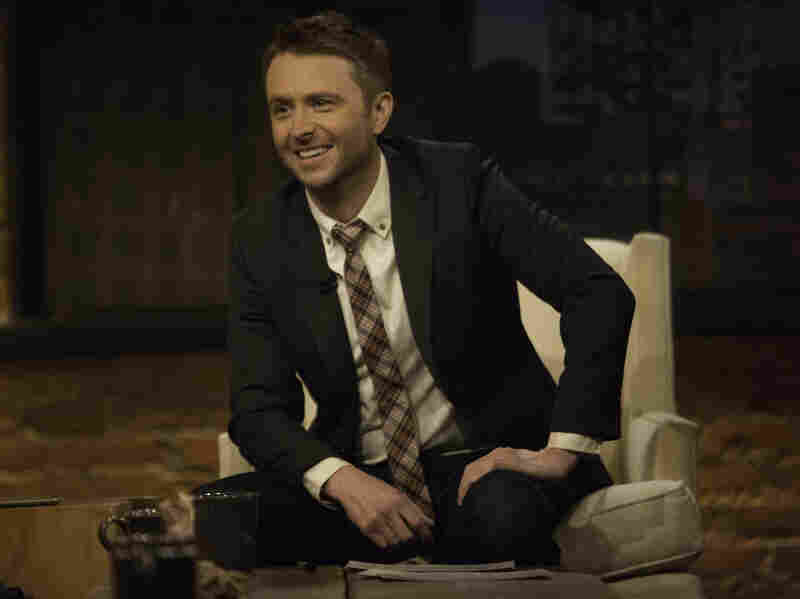 Chris Hardwick was unhappy as the host of a dating show before he embraced his geeky interests and started the Nerdist empire. Now he hosts Talking Dead, shown here, and the new Comedy Central show @midnight. Jordin Althaus/AMC hide caption 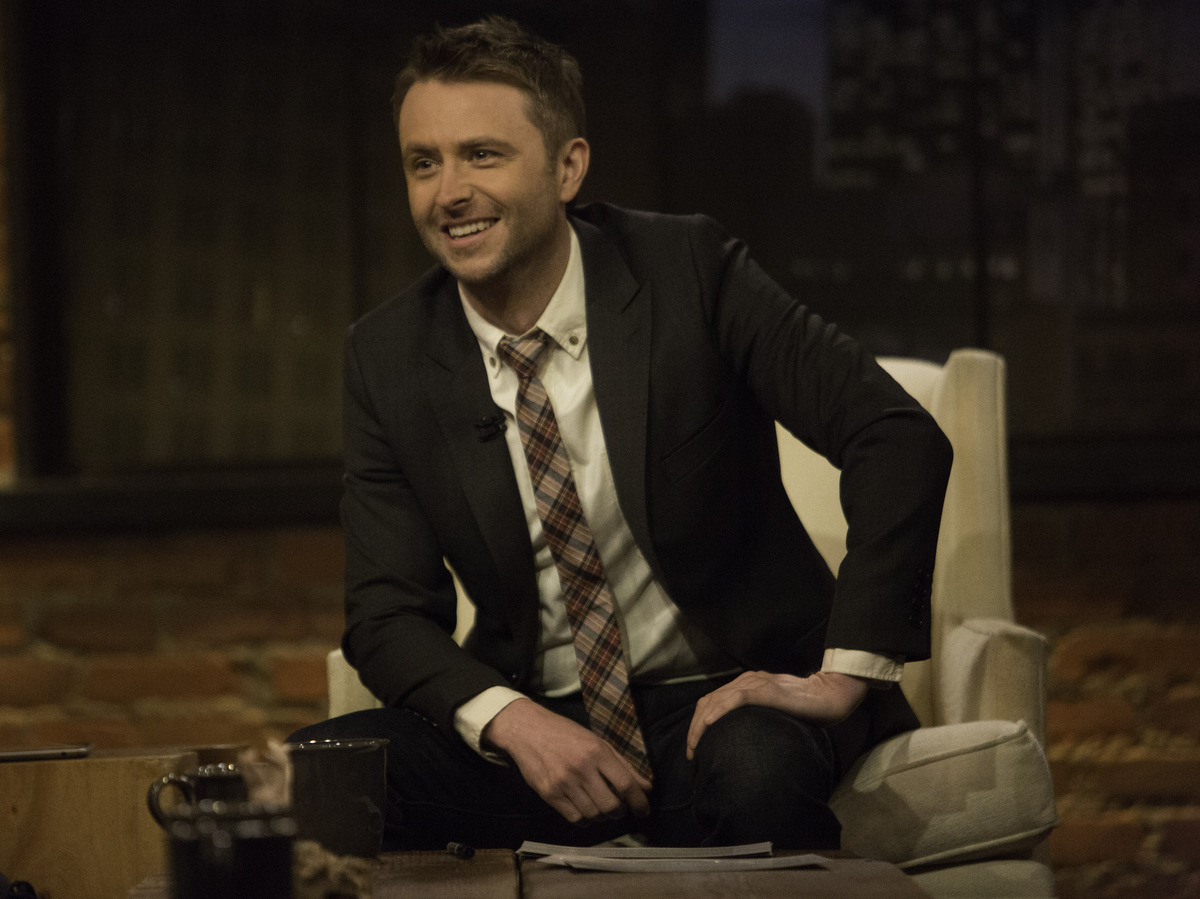 Chris Hardwick was unhappy as the host of a dating show before he embraced his geeky interests and started the Nerdist empire. Now he hosts Talking Dead, shown here, and the new Comedy Central show @midnight.

Born Christopher Ryan Hardwick, he's a chess club nerd from Memphis and son of the late pro bowler Billy Hardwick. But he's also become the wisecracking face of geeky pop culture obsession. And since entertainment these days is dominated by nerd-friendly stuff like science fiction, fantasy and comic books, this is the perfect pop culture moment for a witty goofball like Hardwick.

He already has a perfectly named media empire: Nerdist. It's a geek-centered website and podcast that has grown into a self-help book for nerds, a YouTube channel, a collective of nerdy media creative types and much more.

In an entertainment world where fans rule, Hardwick is their enthusiastic TV guru.

More On The Walking Dead

"Chris has kinda put a face to it," says James Frazier, a Walking Dead fan who now co-hosts the popular Walker Stalker podcast and convention series. He says Hardwick's charm helps non-fans understand the nerds who obsess over the show.

"He's not this geek that you imagine living in somebody's basement," Frazier says. "He's a normal guy with a great sense of humor and I think a lot of people can identify with that."

But Hardwick wasn't always so comfortable on TV. He came to Los Angeles in the late '80s and found work as a radio DJ, standup comic and host of a dating show, Singled Out.

Hardwick wrote in his book, The Nerdist Way, about feeling depressed and drinking heavily back then. He was stuck working on a show filled with mindless 20-somethings trying to hook up.

"The first half of my career, the first two-thirds of my career, weren't really spent on pursuing things that I was passionate about," he says. "It was more just surviving and getting jobs. And then at a certain point I was like, 'Oh, wait — maybe I should just work on things that make me happy.' "

'Parks And Recreation': Good For Nerds, Good For America

There are Hardwick haters. They say that he gushes too much about shows he is paid to help promote. Or they consider him the Ryan Seacrest of nerd TV; seen everywhere, but a bit shallow.

The problem? Some of Hardwick's critics are the very nerds he champions.

"The nerd-on-nerd violence has to stop," Hardwick says. "There is a very dark side to nerd culture, too, which is almost kind of like an abused dog that you rescue that's, like, it's been abused and so it doesn't mean to be but it will bite because it's been hurt."

Hardwick won't apologize for focusing on positivity or saying yes to dream jobs.

And his life will only get dreamier: @midnight will film 40 weeks of shows this year. The Talking Dead returns in February. Hardwick will do more standup comedy and Nerdist will keep pumping out nerd-focused media projects that make stuff like bowling and puppets look cool.

"I wanted to, in my adult life, to just let people know that it's okay to like the things that you like," Hardwick says. "Because it wasn't okay when I was growing up; I was kind of ashamed and just, I always felt outcast and I didn't want people to feel that. So I'm very much [like], 'Hey, let's celebrate the things that we like and it's okay to like these things.' "

Finding stardom by embracing his inner nerd: it just might be Hardwick's biggest success of all.