Accessibility links
It's Not Magic On The Mountain, It's A Rain-Making Machine The snowpack in the Mountain West is at just a small fraction of its normal level, and it was the driest year ever recorded in many parts of California. Cloud seeders are trying to squeeze raindrops out of Mother Nature by spraying tiny silver iodide particles into incoming clouds. 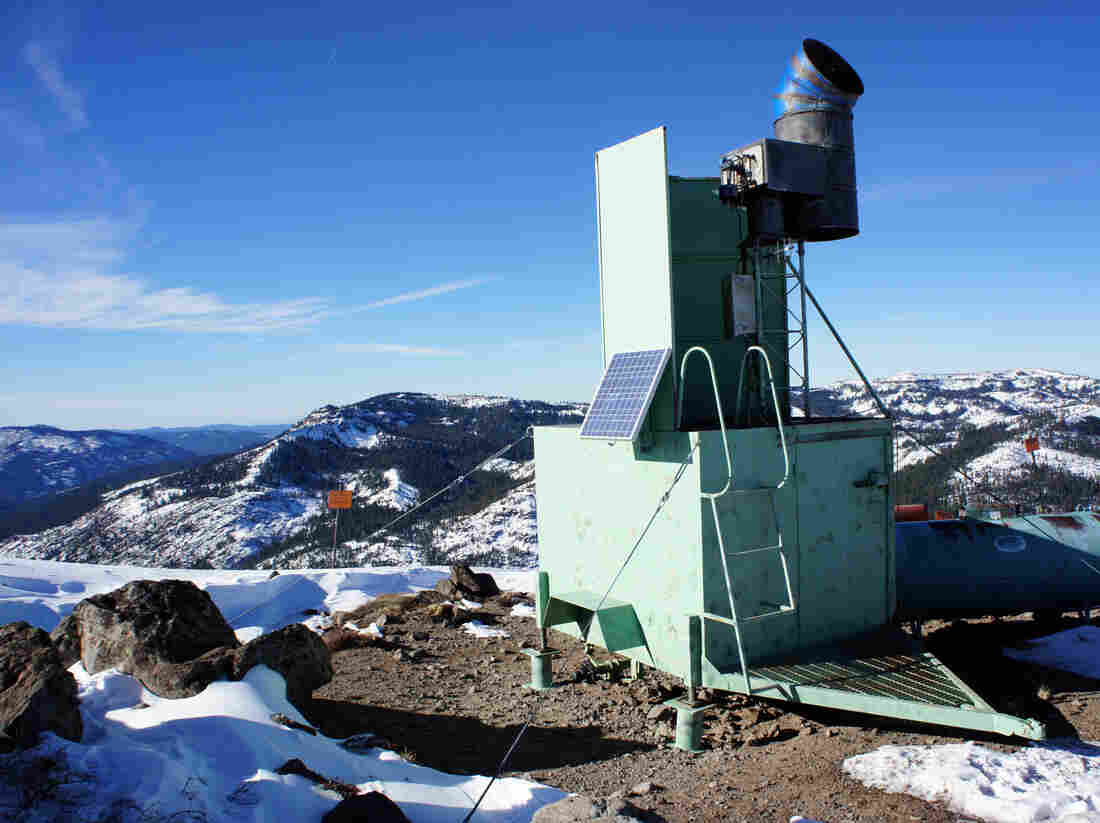 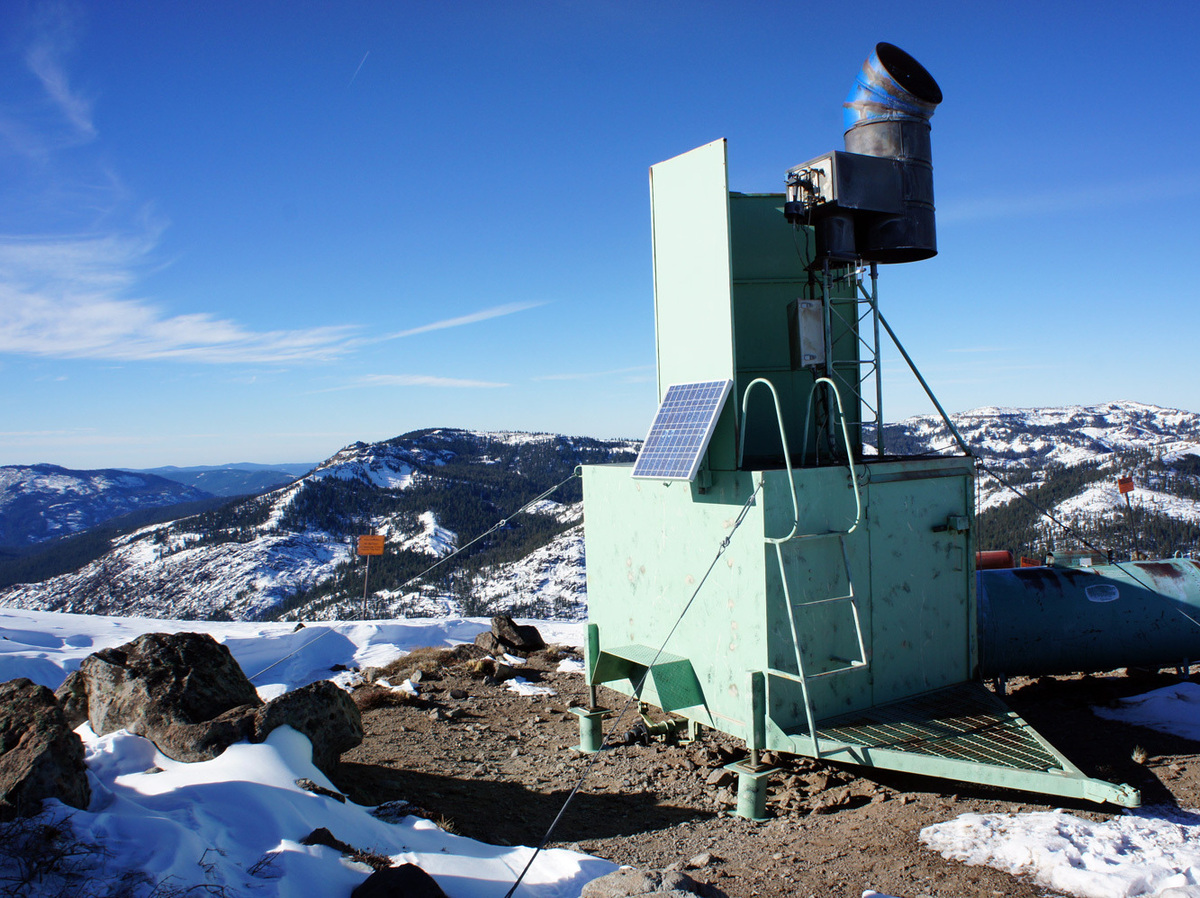 A ground-based cloud-seeding tower at Alpine Meadows ski area near California's Lake Tahoe. It spits out silver iodide particles that are the right size and shape to help precipitation form.

The snowpack in the Mountain West this year is at just a small fraction of its normal level. In fact, 2013 was the driest year ever recorded in many parts of California, and there's little relief in sight. But water managers are trying to squeeze every last raindrop out of Mother Nature with a technology developed in the state more than 50 years ago: cloud seeding.

Droughts tend to produce a lot of wishful thinking, and researcher Jeff Tilley says it definitely comes his direction.

"There's only so much we can do. If we could make the clouds appear out of the thin air, we would, but we can't do that yet," he says.

Tilley runs the cloud-seeding program at the Desert Research Institute in Reno, Nev. Weather modification, as it's called, is about making rain, not making clouds.

It happens at the summit of the Alpine Meadows ski area in California, on the northwest side of Lake Tahoe — right where the chairlift drops off.

Most skiers don't notice the green metal bunker with a chimney on top. This isn't a snow-making machine like the ones ski resorts are relying on this winter. It's designed to improve the water supply in the area by releasing tiny particles of silver iodide. These are the seeds in cloud seeding, rising thousands of feet up into the air.

Clouds are made of millions of tiny water droplets, but those drops don't automatically fall as rain or snow. They need something to stick to, like tiny dust particles. If a cloud doesn't have enough dust, Tilley says, "you have these very static, dead clouds that don't precipitate, don't produce any water and just keep on moving right through."

That's where the silver iodide comes in. Tilley says it's the right size and shape to help snowflakes form.

Cloud seeding only works in certain conditions — you have to have clouds already, and it has to be colder than 20 degrees — but over a season, it can make a difference.

"What we find is a range of anywhere between 8 and 15 percent increase in water," Tilley says.

The silver iodide ends up in the local environment, and some worry it's a contaminant. Tilley says tests show only trace amounts.

When cloud seeding began, it was seen as "magical thinking," an idea Tilley says has stuck around. "We get voodoo, we get Dr. Frankenstein, we get all sorts of things. But we've been able to refine the technology."

Peter Gleick, president of the Pacific Institute, a water policy think tank, says it's hard to verify exactly how much water cloud seeding produces — and if it's worth the money. A 2003 review by the National Academy of Sciences found that more research needs to be done to prove its effectiveness.

"For a long time, there's been hope that we could somehow figure out a way to squeeze more water out of nature," Gleick says. "We get a certain number of clouds with moisture in them. If we can wring a little more out of those clouds, that's sort of the idea behind cloud seeding.

"But we're not going to wring a lot more out of those clouds. So it's not a silver bullet. There is no silver bullet for California's water problems," he adds.

Across the state, water agencies spend $3 million to $5 million each year on seeding, which is estimated to boost runoff by about 4 percent. That might not sound like much, but as water resources get tighter, Tilley says, cloud seeding is getting a second wind.

Nine other Western states also use seeding, including Colorado, Texas and Utah, where it's commonly done with airplanes.

"I think, for the entire Intermountain West, it's becoming more important," Tilley says. "It's not going to be the whole answer but it can be one tool in the tool kit, and it's a cost-effective one."

Tilley says cloud seeders are looking to cut costs further by using drones instead of planes. The demand is on the rise, he says, as the Western states rely more than ever on every last raindrop.