Accessibility links
This Expensive Rubber Mat Could Be The Synth Of The Future Fit with rubbery keys and advanced electronics, the newly minted keyboard is designed to realistically mimic other instruments, thus allowing one player to sound like many. Christopher Werth speaks with the instrument's inventor, Roland Lamb, to understand just how it works. 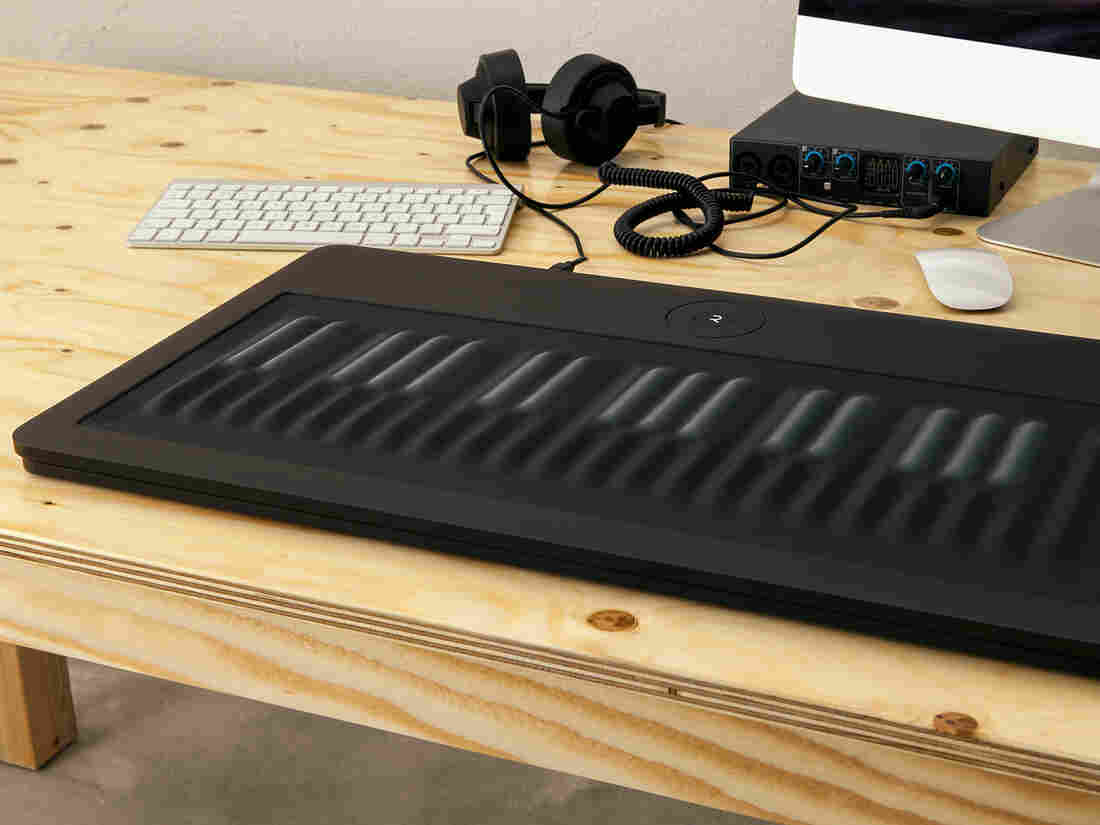 Fitted with rubbery keys and advanced electronics, the Seaboard was designed to realistically mimic other instruments by letting players pull off subtle bends and slides between notes. Roli hide caption 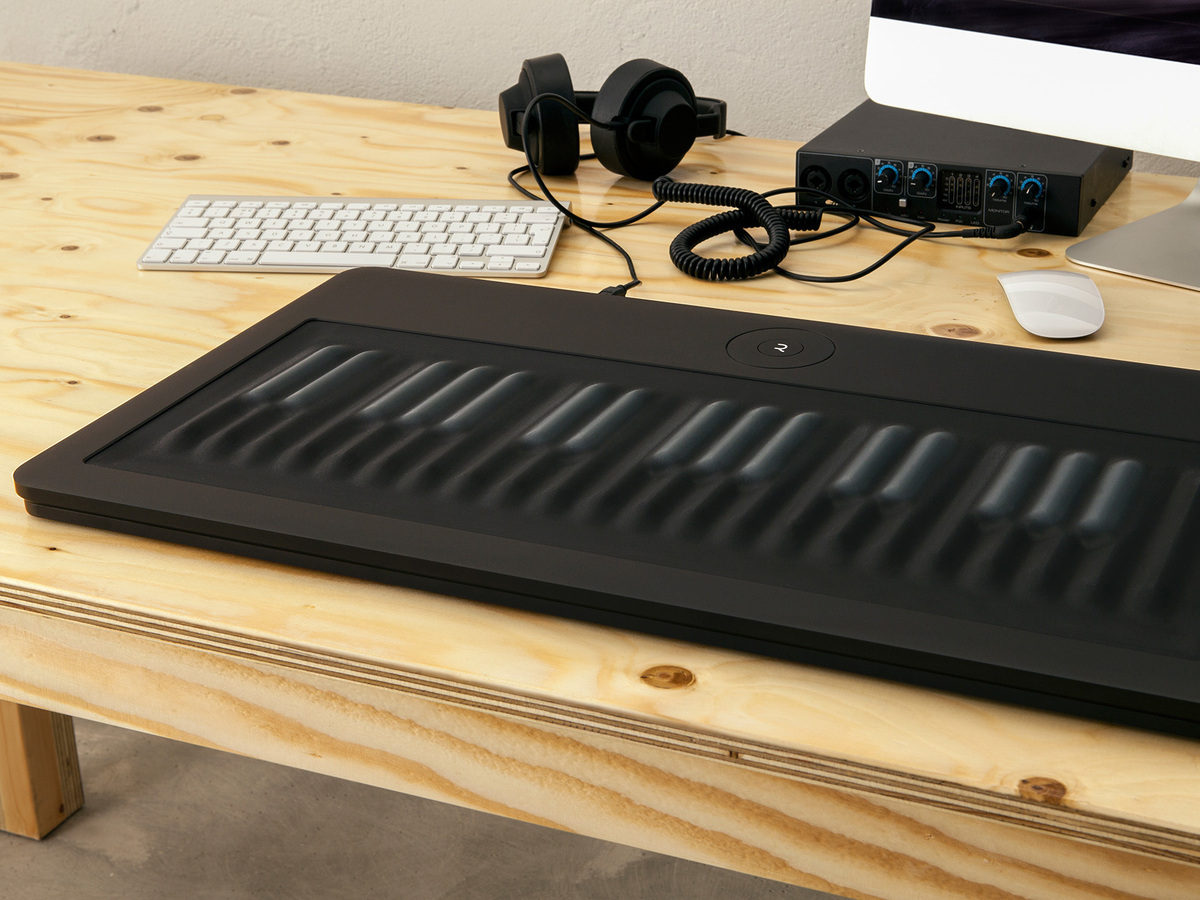 Fitted with rubbery keys and advanced electronics, the Seaboard was designed to realistically mimic other instruments by letting players pull off subtle bends and slides between notes.

Consider the piano: Invented sometime in the late 17th century, the instrument has been through several iterations in its centuries-old life. For example, the type of piano on which Bach or Mozart wrote looked and sounded very different from the piano we know today.

Now, an American inventor named Roland Lamb is trying to take the instrument another step further, having developed a fondness for the piano at an early age.

"I grew up in rural New Hampshire," Lamb says. "I was home-schooled. So the only interesting things in the house were books and the piano."

Lamb says that experience left him with a nagging desire to get more out of the instrument.

"I remember reading about Thelonious Monk, of whom it was said he was searching for the space between the black and white keys," Lamb says. "So he'd always play these little chromatic clusters. And it was like he was pushing the instrument to its limit. And I thought, you know, maybe this is a question for design? Maybe we could reinvent the piano and actually make it capable of playing those notes between the keys."

Lamb, 35, founded a tech startup in Britain called Roli (after his own nickname), based in a studio and workshop in East London, to create an instrument that could do just that.

Lamb describes the Seaboard as "a futuristic version of the piano." Actually, it kind of looks like a cross between a keyboard and Apple's iPod: It's clean, sleekly designed and just a few inches thick. But instead of individual keys, there are two rows of rounded bumps that look like hot dogs sliced in half and made of grey silicone. Lamb says musicians can literally dig their fingers into these molds to create different sounds.

"It's a soft material," Lamb says. "At first, it feels strange and alien and different — especially for piano players, because they're so used to the cool, smooth touch of piano keys."

However, he says, once musicians get a feel for it, this squishy keyboard allows them to do things they can't do with typical synthesizer keyboards.

Singer-songwriter Jamie Cullum gets a demo of the Seaboard from creator Roland Lamb.

To demonstrate, Roli employee Heen-Wah Wai gave me a side-by-side demonstration. He says a bass line played on a standard keyboard sounds stiff, like it's pretending to be another instrument. On the Seaboard, however, Wai says he can bend and slide notes as though he were actually playing a double bass, which he does by rotating his fingers across the silicone bumps and sliding them along the edge of the keyboard.

Wai says the Seaboard's rubbery surface also allows him to control the intensity of each individual note by digging his fingers deeper into its soft material.

"You can press harder or softer to control the volume, to simulate the volume swell of a stringed instrument," Wai says.

As a result, a single player is able to sound like a full ensemble of musicians.

"If you close your eyes, you can imagine each key has a kind of bow in it and has that kind of orchestral feel," Lamb says. "And each key can be controlled separately, so it gives the effect of five or six people with cellos playing different notes at different volumes."

Conceptually, Lamb says, these innovations have been possible for a long time. But it's only lately that computer-processing speeds have advanced enough to turn the idea into a reality.

"To create this, we have to read data very, very rapidly," Lamb says. "And five or 10 years ago, even the kind of benchmarks within the industry wouldn't really have been enough to achieve what we're achieving today."

That being said, what about the playability of the instrument? Rob Gentry, a Roli employee who demonstrates the Seaboard to potential buyers and investors, says the instrument feels natural and intuitive — but not necessarily effortless.

"You need to be a little more precise when it comes to playing," says Gentry, who's also a musician in London. "You can play a little out of tune, for example, if you're not careful. But that's like anything. It's just practice. Whilst it's really heavily based around a keyboard, it's its own instrument."

One other caveat: Buying a Seaboard will set you back anywhere from $3,000 to $4,500, depending which size you get.