Accessibility links
Interview: Leonardo DiCaprio On 'The Wolf Of Wall Street' Actor Leonardo DiCaprio, who stars as a high-living stock swindler in The Wolf of Wall Street, tells NPR's David Greene that it was "incredibly freeing" to play a character with no moral high ground. 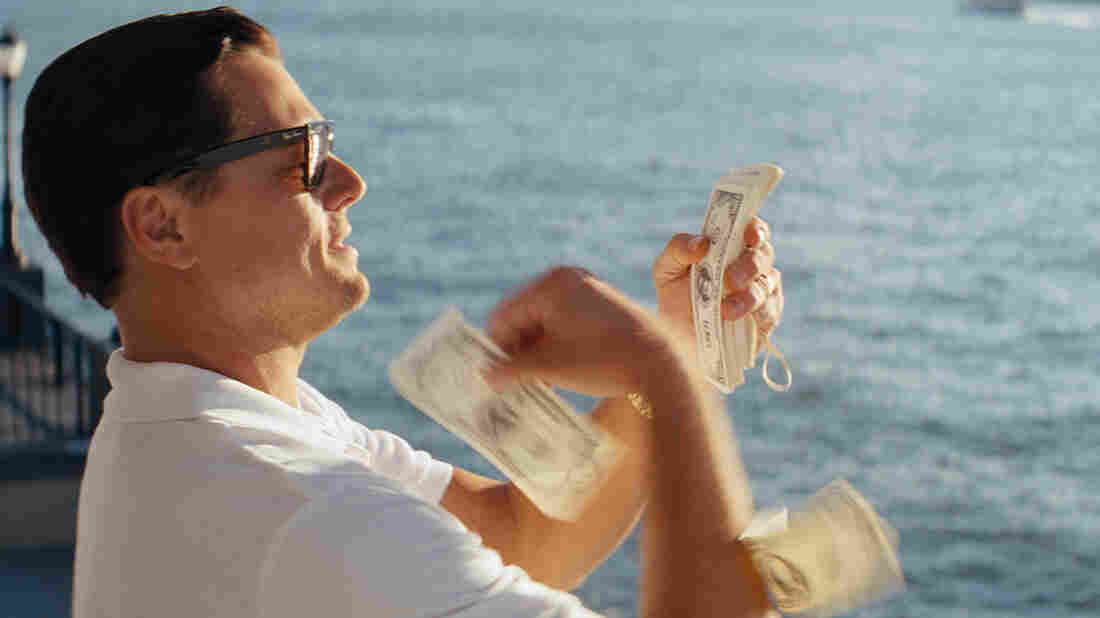 Leonardo DiCaprio was born in Los Angeles, an only child whose father worked in comics and named him after artist Leonardo da Vinci. DiCaprio began his career as a child actor, appearing in TV commercials and shows before transitioning to films.

Today, he's a renowned performer best known for his role in the 1997 film Titanic, in which the then 23-year-old played Jack Dawson opposite British actress Kate Winslet. Since Titantic, DiCaprio has earned critical and popular acclaim for a body of work that includes Inception, The Departed and Catch Me If You Can. He's been nominated for nine Golden Globe awards and has collaborated with such famed directors as Steven Spielberg and Martin Scorsese.

A Wall Street Predator With An Appetite For Excess

DiCaprio's latest film, The Wolf of Wall Street, is the fifth time the actor has worked with Scorsese, and it's earned him another Golden Globe nomination — for Best Actor. The film is based on the book of the same title by Jordan Belfort, and tells the story of the stockbroker in what DiCaprio calls an "exploration of greed." The film just barely escaped NC-17 rating, but DiCaprio doesn't mind dabbling in some controversy.

DiCaprio tells Morning Edition's David Greene that he enjoyed the liberty and creativity that came with playing Belfort: "It's incredibly freeing, performance-wise, to have no moral high ground and nobody really in the film that I had to answer to."

It's the exploration of greed in a lot of ways. And, to me, [greed is] the most destructive force in our modern era, and it's going to continue to be so.

It's incredibly entertaining. The entire film is insane; it's hedonism at its finest. I mean, it's — I really came into this film with the attitude of doing "Roman emperor right before the fall of the empire." I mean, I looked at these people as people that had no real sensibility for anything around them except their own indulgences.

To us, the intoxication of this world is far more fascinating. I think everyone knows the ramifications of this sort of attitude, where people find the loopholes in our financial systems and take advantage of others. We've heard those stories. To us, it was much more important to explore the attitude of these people, and how you can get so lost in the world where you're like the ship driving forward and you don't even pay attention to the wake of your destruction. The victims are irrelevant. And at the end of the film, you know, there's a great irony that I don't want to give away — but [in] the world that we live in, these people don't suffer or really pay the price. You know, the show goes on, so to speak.

I think that a little bit of controversy is amazing, 'cause it shakes things up. I'm incredibly proud that this film is taking chances, and I think that as the rest of history unfolds, we'll be looking at this film as something that was somewhat groundbreaking in a lot of ways.

On time he spent with Belfort — and whether he got conned

What I got to experience in speaking with Jordan on a personal level was how incredibly forthright he was about how lost he was during this time, and how completely consumed by all these deadly sins. And when you have somebody that you can interact with on a personal level that divulges that much personal information, it can only improve your performance, and it can only make you more connected to the material. So I worked with him quite diligently for months, you know. I even had him rolling around [on the floor] showing me what the Quaaludes were like.

The endorsement from me was a simple one. I see that he's done everything he possibly can to repay his victims, and since then, he's been trying to influence others to make the right decisions.

I don't believe I've been conned by him at all. To me, this is not about Jordan Belfort. To me, he's a microcosm of a much bigger story. We wanted people to have a closer understanding of what this ride would be like. Why is this so enticing to them? Why is screwing people over, and giving in to your own indulgences and ultimately doing just what's right for you, so seductive? And that's the movie that we wanted to do.

On how DiCaprio got his name

My father tells me that they were on their honeymoon at the Uffizi Gallery in Florence, I believe. They were looking at a da Vinci painting, and allegedly I started kicking furiously while my mother was pregnant. And my father took that as a sign, and I suppose DiCaprio wasn't that far from da Vinci. And so, my dad, being the artist that he is, said, "That's our boy's name."

On his parents' reaction to The Wolf of Wall Street

I am almost 40 years old now, so I'd hope that I wouldn't have to answer to them, even though I think that the perception of me is still the child actor, [so] that, you know, people would wonder what my parents thought. But to tell you the truth, it didn't faze them whatsoever. I mean, I was reading underground comics in the back of my dad's station wagon that were much more gratuitous than this at 10 years old, so nothing really affected them on that level.