Accessibility links
Marijuana 'Hash Oil' Explodes In Popularity, And Kitchens A potent, syrupy extract of marijuana has become a popular way to ingest pot among young people, particularly in places where pot use has been liberalized. That has public safety officials worried, in part because making the substance can have explosive side effects.

If you think the recent liberalization of marijuana laws around the country is only about smoking leaves and buds, think again. For users younger than 25, "hash oil" is where it's really at. This concentrated resin of marijuana is creating new public safety headaches — even in places where it's legal.

There have always been forms of the substance, but the resins available today are much stronger than in years past. That's due in part to the expertise developed by medical marijuana producers, who have learned how to make more potent versions of the oil.

Near Seattle, medical marijuana entrepreneur Jeremy Kelsey shows off a sample of a resin that he markets as extreme pain medication for cancer patients. It looks like dark green Karo syrup. Kelsey calls it "pure THC."

"There's pounds literally that went into this dish," Kelsey says, dabbing at the sticky substance that coats the bottom of a square Pyrex pan.

His product is especially potent because he makes it only from marijuana buds, not, as others do, from leafy matter and stalks. He calls the resin medication, but recreational users have other names for it: "butane honey oil," "wax," "shatter" or simply "dabs" — because a little dab will do you. 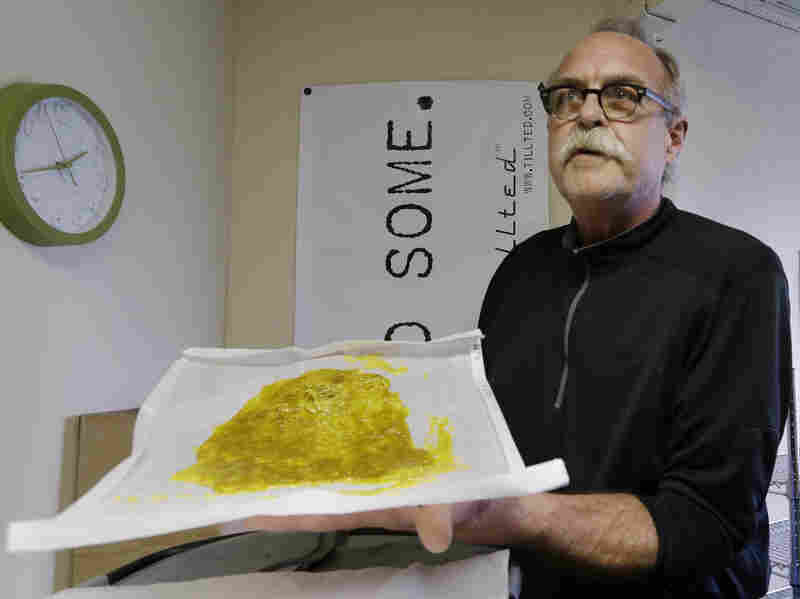 Jim Andersen displays butane hash oil at a marijuana growing facility in Seattle in April 2013. The state's licensed producers will be required to use professional-grade equipment when making the extracts. Elaine Thompson/AP hide caption 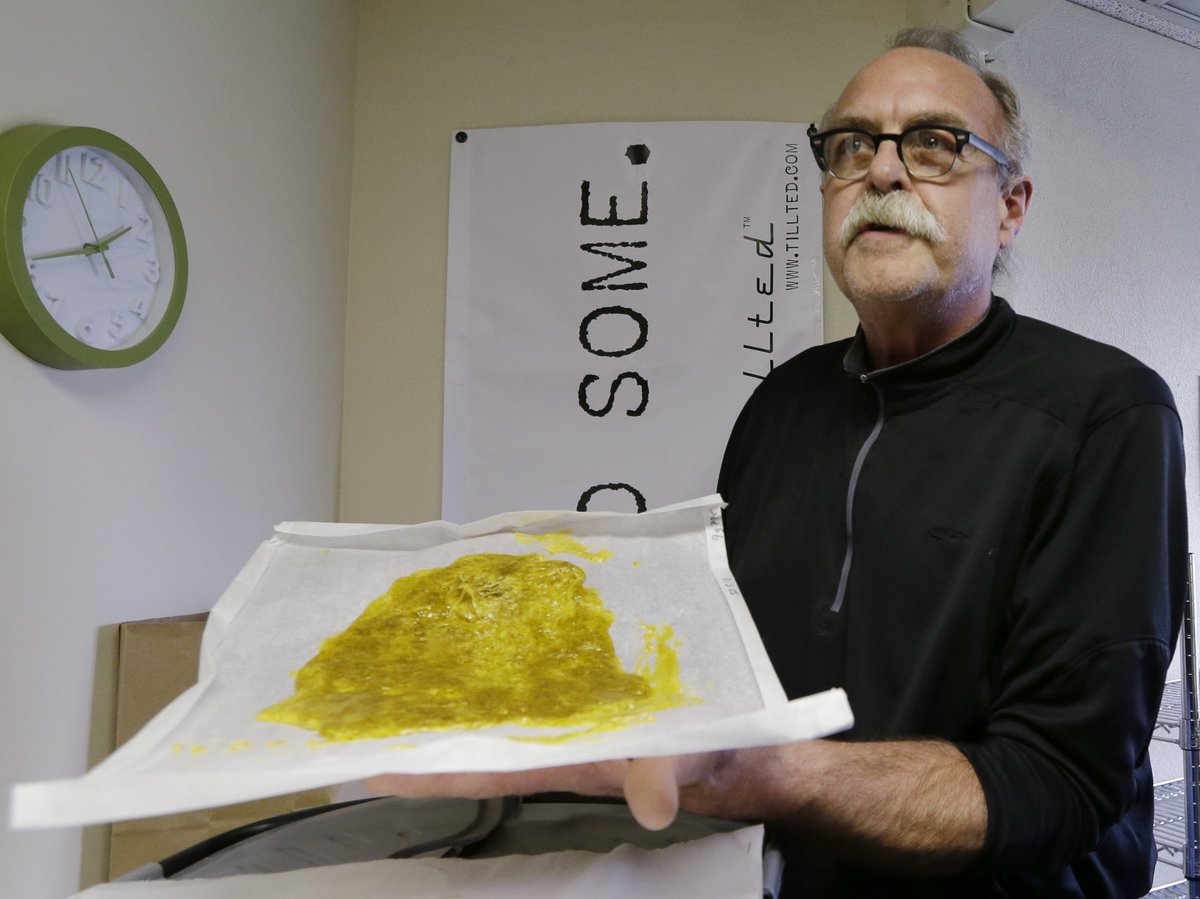 Jim Andersen displays butane hash oil at a marijuana growing facility in Seattle in April 2013. The state's licensed producers will be required to use professional-grade equipment when making the extracts.

Users smoke it, vaporize it and sometimes even eat it — those people sometimes refer to themselves as "tar babies." High Times magazine jokingly implies that honey oil is best for people who already smoke regular pot every day. The stuff is so strong, it can cause less experienced users to throw up.

Some people make the resin at home. You just soak the pot in some kind of chemical solvent, which extracts the resin from the marijuana. Do-it-yourselfers like using butane, which can be purchased at most hardware stores.

The trouble is, solvents can catch fire — and even explode. Last year, the U.S. Fire Administration, a department of the Federal Emergency Management Agency, issued a bulletin warning of an increase in fires involving the production of hash oil.

In Washington state, which legalized marijuana for recreational use in 2012, authorities have noted an uptick in similar incidents. There was an explosion in a building in Seattle on Tuesday, and Verner O'Quinn, a sergeant with the Seattle Police Department's bomb squad, blames solvents used in the production of hash oil.

There were no victims in the explosion, but it created a big bang. "It blew out the windows, blew the walls 6 inches from the foundation in an area. Cracked the siding," O'Quinn says.

He says fires in the Seattle area often come with a particular twist: They start with exploding refrigerators. Apparently, some people put their marijuana-butane marinade in the freezer. "Maybe the process works better when it's colder," O'Quinn says.

Most freezers have a fan, which then circulates the volatile butane fumes into the rest of the refrigerator, "down to where the compressor is," he explains. "A small spark will set it off, and it generally blows the door off."

Starting Today, You Can Legally Sell Marijuana In Colorado Jan. 1, 2014

A 'Practical Decision' To Legalize

Washington state allows adults to possess up to 1 ounce of pot, so turning it into hash oil isn't illegal, per se. Still, if you're using explosive solvents, you might be looking at a zoning violation or even criminal charges of reckless endangerment.

The state is now getting ready to license commercial marijuana processors, who will be required to use purer solvents and professional-grade equipment when making the extracts.

State officials did waver over whether hash oil should be legal at all. Initially, the Washington State Liquor Control Board, which is writing the regulations for the legalization process, decided the voter-approved legalization did not apply to concentrates. It later reversed course.

Randy Simmons, who runs the legalization implementation process, calls that a practical decision.

"We're trying to move as many people out of the illicit marketplace as possible," Simmons says. "And in order to do that, if we would have excluded these oils, we would have left a whole lot of the marketplace in the black market."

In other words, hash oil is too popular not to legalize. But there's no guarantee that will always be true. Simmons points out that after Prohibition ended, liquor laws were constantly fine-tuned with experience. He expects the same thing may happen with marijuana and its more potent derivatives.