Accessibility links
Interview: Cate Blanchett on 'Blue Jasmine' After devoting the past several years to theater acting, Cate Blanchett starred this past summer in Woody Allen's Blue Jasmine, for which she's been nominated for a Golden Globe. She spoke with NPR's Robert Siegel about the similarities between theater and film — and the need for lightness in even the darkest drama. 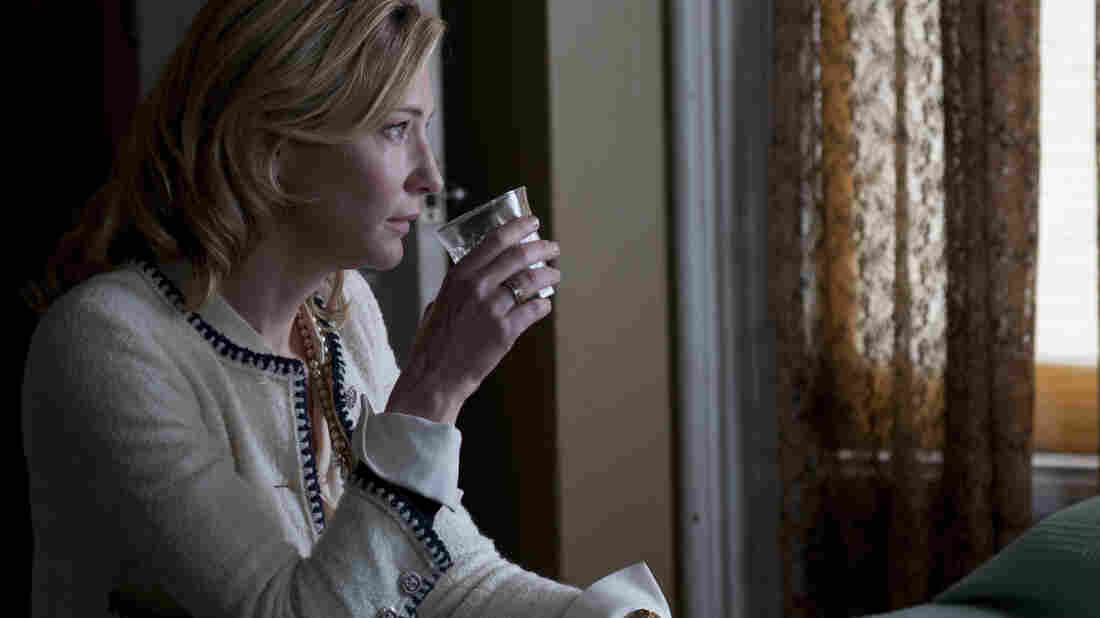 The actress Cate Blanchett is in the States this week; it's summer vacation time for her kids in Australia, where she and her husband are artistic directors of the Sydney Theatre Company.

It's also awards season, and Blanchett makes a compelling claim for one: She plays the title role in Woody Allen's Blue Jasmine, for which she's earned near-unanimous acclaim.

Jasmine French is a latter-day Blanche DuBois. Or a Ruth Madoff. She's the financially broke, mentally disintegrating widow of a Wall Street con man, who descends on her sister's modest household and family.

Blanchett tells All Things Considered's Robert Siegel that a careful mixture of humor and drama is crucial to Blue Jasmine. In fact when she read the script, she initially took it for a comedy.

On the necessity of "buoyancy" in drama 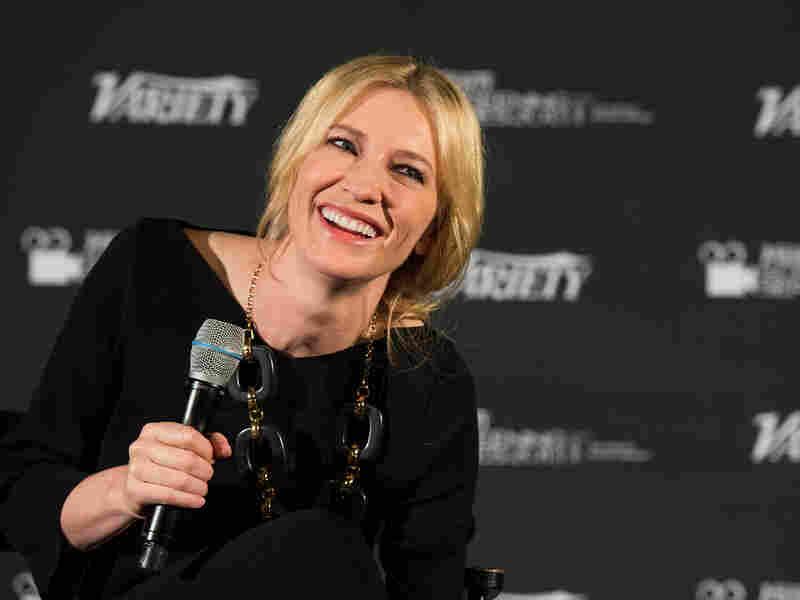 Laugh Riot: Blanchett, pictured here at a Hollywood screening of Blue Jasmine on Jan. 9, tells NPR's Robert Siegel that she read the film as a black comedy. It wasn't until three weeks into filming that director Woody Allen told her it was meant to be a serious drama. Valerie Macon/Getty Images hide caption 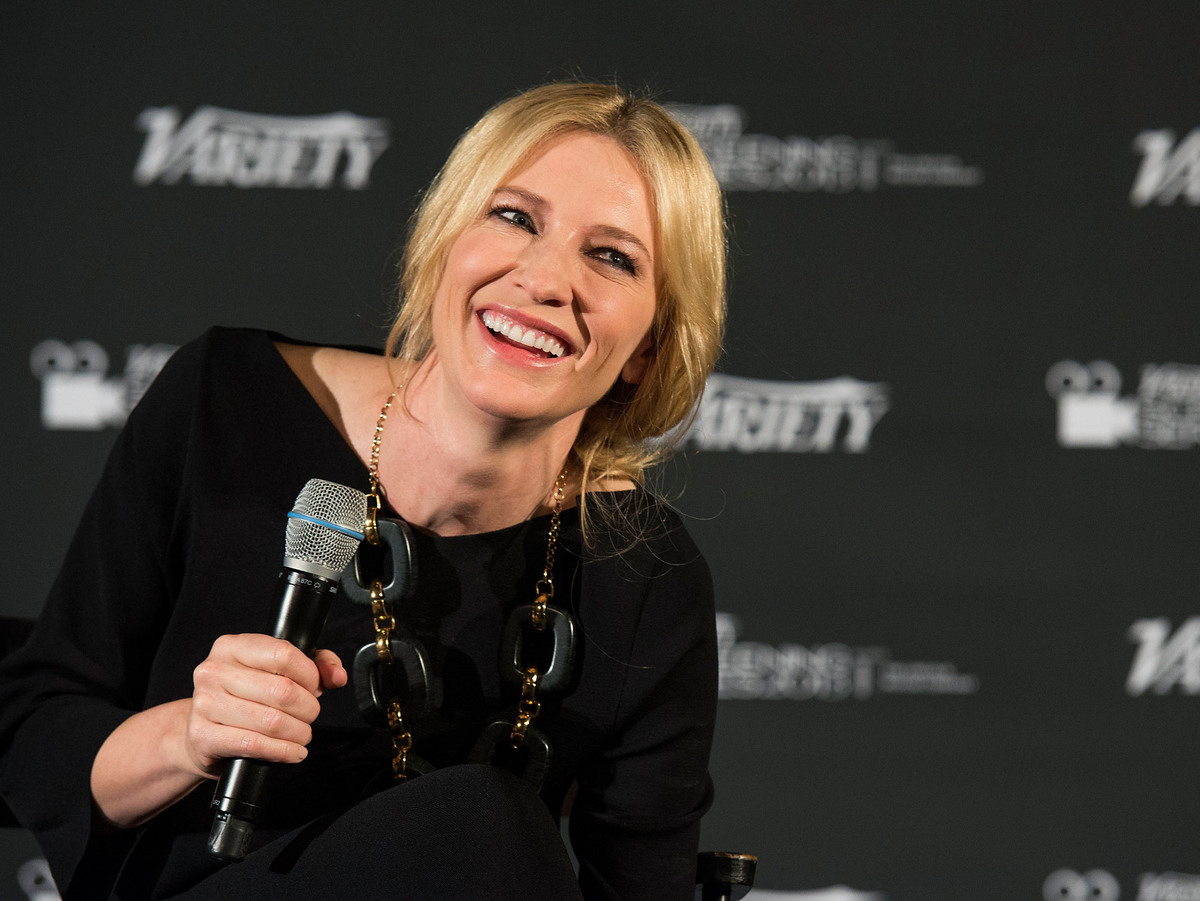 Laugh Riot: Blanchett, pictured here at a Hollywood screening of Blue Jasmine on Jan. 9, tells NPR's Robert Siegel that she read the film as a black comedy. It wasn't until three weeks into filming that director Woody Allen told her it was meant to be a serious drama.

I remember thinking, when I was playing Hedda Gabler, that several sequences of the play were utterly absurd. So maybe when I say "funny," I mean absurd.

And I think that's where the hallmark of Woody Allen's work is. He understands the painful absurdity of life, and it's in those juxtapositions [that there] lies, often, a very black sense of humor.

But tone is everything, really, I think, when you're working with Woody, because he's made films of such diverse tone, from Bananas to Interiors. And having never worked with him before, you're not quite sure where the playing of it is going to lie, and I thought you could take it in either direction. Hopefully, I think, the final product of Blue Jasmine — you have a buoyancy to the pain that makes it truly sort of pathetic.

On giving a story depth without weighing it down

I think he wanted to make sure there was a depth to it. And when I say "depth," I don't mean weight. I think those two things are quite different. It's like when you're playing Hedda Gabler, or Blanche DuBois or Richard II or any of those great roles, you have to find the buoyancy to the depth so it doesn't become heavy. Because I think often when people are in crisis, they're not sinking into it. They're trying to find those moments of lightness, and it's the pull in those two different directions, I think, that allows [the film] to reach the audience, and for it not to become a dirge.

On her character in Blue Jasmine

I think, I hope, what I brought out in Woody's screenplay is that she's utterly constructed. I mean, the references that are made to her teen years, you know — she's changed her name. She's estranged from her biological beginnings, you know — to avoid thinking of what? The chasm, I think, that has always existed, [which] she's filled with her husband, her social network, her clothes that she buys. And I think a lot of people said, "Well, why should we feel anything for her?" But I tried to find a connection to that universal problem that so many of us feel — who am I, without all the trappings of our lives?

Strangely, the part [itself] is the last point of connection. [For me] it's who is going to be in it, and who's directing it, and what's the story? And I was compelled and utterly gripped by the story, the tale. [I've] been running the Sydney Theatre Company with my partner for the last six years, producing theater and performing onstage. ... I've been reading play texts. And it had the depth and complexity and the level of craftsmanship that a lot of theater texts have. I thought, "This is a part to swing a cat in, and how do I?" So you just have to throw yourself at it.

On working in both theater and film

I've been very grateful I've been able to move between the two forms, because they're not diametrically opposed; I think they feed each other. You know, you do have a self-awareness as an actor. That's what you bring from the theater, is that you're very aware that you have to hit that light, whilst also talking about the fact that you've lost your children and you know that someone is answering their mobile phone in Row G, and that someone else is opening a lolly wrapper in the back of the stalls.

And so you have all of these awarenesses, and it makes you fearless, in a way. Because you can tell whether something is living or dying when you're on the stage, and you can do something about it.

I think sometimes when you're working consistently in film, and maybe this is just me, but you do feel quite dislocated from your audience. I was acutely aware of the audience in the cinema when I was doing Jasmine. I don't know whether that was the pace itself or whether that was just my recent experience.