Accessibility links
Four Years After Earthquake, Many In Haiti Remain Displaced Four years ago, an earthquake heavily damaged Port-au-Prince and killed more than 200,000 people. Many areas of the Haitian capital now look much like they did before the 7.0-magnitude quake. But nearly 150,000 are still living in temporary structures. 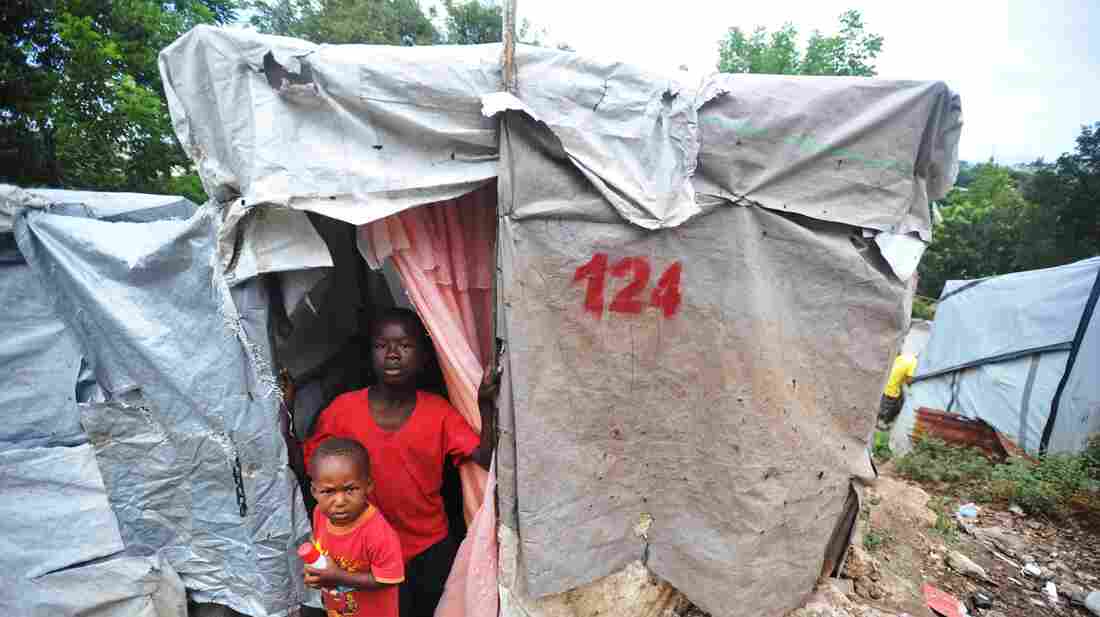 Boys at a camp for earthquake victims look out from their shelter in Petion-ville, Haiti, outside of Port-au-Prince in November. AFP/Getty Images hide caption

Four years ago Sunday, a 7.0-magnitude earthquake hit Haiti, destroying its capital of Port-au-Prince and killing more than 200,000 people.

Today, much of Port-au-Prince looks like it did before the quake. Most of the tent camps in the city itself are gone, and streets are loaded with overcrowded buses and women selling vegetables.

Most of those whose lives were upended by the quake are back in some kind of home. Most of the rubble has been cleared from the streets. The severely damaged presidential palace has finally been razed. And the government is rebuilding its ministries downtown.

But for nearly 150,000 people, life hasn't moved on. They still live in the temporary plastic and plywood structures erected after the disaster.

What Keeps Them There

"It's the worst place to be in Haiti," says Gregoire Goodstein, mission chief for the International Organization for Migration. "We're talking about the higher-hanging fruit; people who are unable to get out of the tent camp system because they really don't have any other solutions for themselves."

Goodstein says it's possible the final resettling efforts could wrap up next year, but that depends on major factors, like hurricane season. Haiti is also planning parliamentary elections, and there's fear electoral violence could overtake the city, slowing down all government functions.

The government says there's one major obstacle to resettling the final 150,000 people: money.

"It will take $800 per person to get them out of the camps," says Harry Adam, who heads the Haitian government agency that's spearheading the reconstruction. "It's quite a big amount of money."

Some of that $800 goes to residents as rent subsidies — cash to help them get into a safe home.

No Water, No Electricity

Meanwhile, 271 official tent camps dot the region. The Haitian government recognizes these sites, and each tenant has been registered by NGOs. They're perched on dangerously steep mountainsides and pack busy street corners. There's a cluster of tents in view of a Porsche dealership.

Activists Sue U.N. Over Cholera That Killed Thousands In Haiti

Rosemary Durvessaint lives with her two children in a three-room hodgepodge of corrugated tin, cardboard and tarps that reads, "USAID. From the American People."

Since May she's lived in Titanyen, a cluster of tents and ramshackle houses growing up north of Port-au-Prince. Titanyen is one of the unsanctioned camps on land the government declared free to the public, and thousands have taken advantage — creating new homes along the dusty, dry mountainsides.

As the wind rips through and the structure struggles to hang on, it's hard to see this as safer than before the quake, but Durvessaint says the government has done nothing for the people out here.

A New City With Old Problems

Peter de Clercq is the new humanitarian coordinator for the United Nations. He says international donors have moved on to other crises, and Haiti needs to transition away from relying on outsiders.

It needs to demonstrate "clearly and visibly to the international community that it's capable of taking care of these basic services," he says.

Water and sanitation aren't even guaranteed in Port-au-Prince, let alone Titanyen, yet residents say they're likely to stay permanently.

That's OK for Adam, Haiti's reconstruction chief. He says Titanyen and the new villages will one day be the northern reaches of Port-au-Prince. He's pledging $6 million in aid for water and sanitation projects in the area.