Accessibility links
Kitchen Window: Maple Syrup Goes To Dinner — And Drinks The breakfast staple makes a move to the grown-ups' table, punching up a pork roast and veggies, pecan pie and a cocktail. 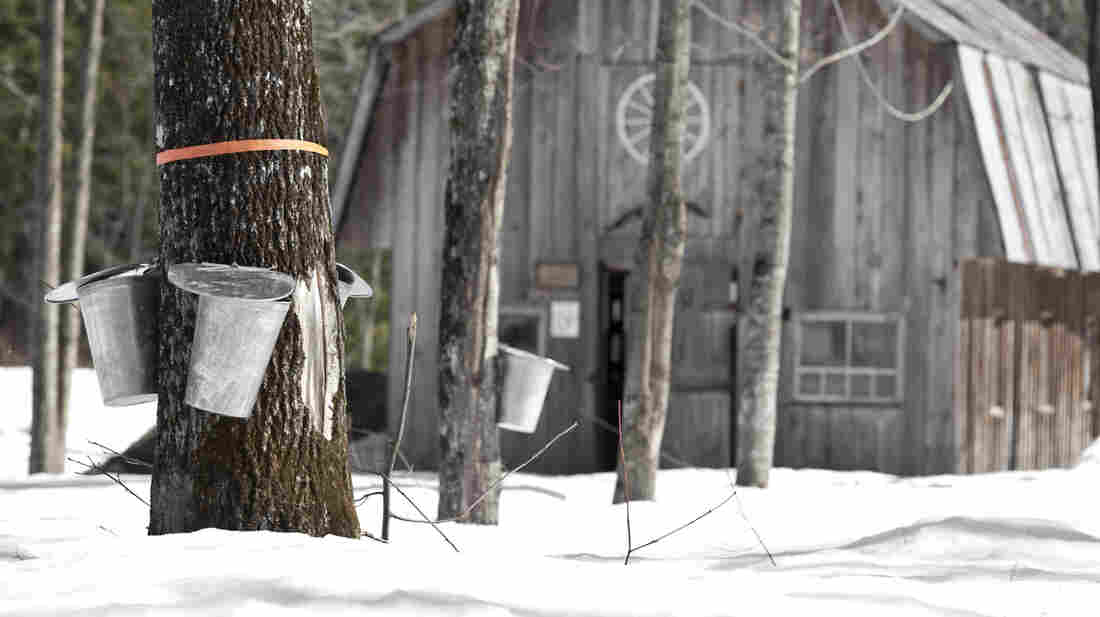 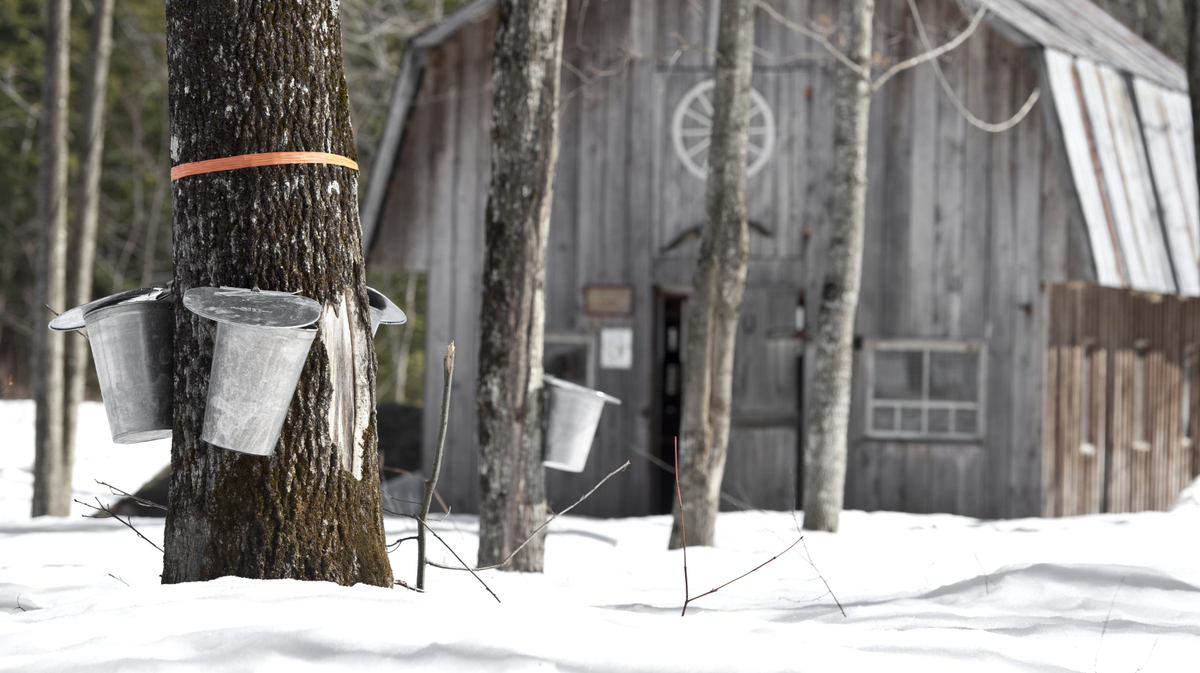 When I was growing up and my mom would make pancakes and bacon, I'd layer bacon pieces in between pancakes, then drown the stack with maple syrup to create a towering, sticky mess. The rest of my family would daintily eat their bacon from one plate and their pancakes from another, preventing the joyous union of salty and sweet.

Clearly, I was a trailblazer. In recent years, the merging of salt and sugar has proved to be big business. One of the best-selling breakfast items at McDonald's is a sandwich called "The McGriddle" — breakfast meat, egg and cheese nestled between two maple syrup-infused pancake buns.

Maple syrup is also on the tables of celebrated gourmet restaurants. 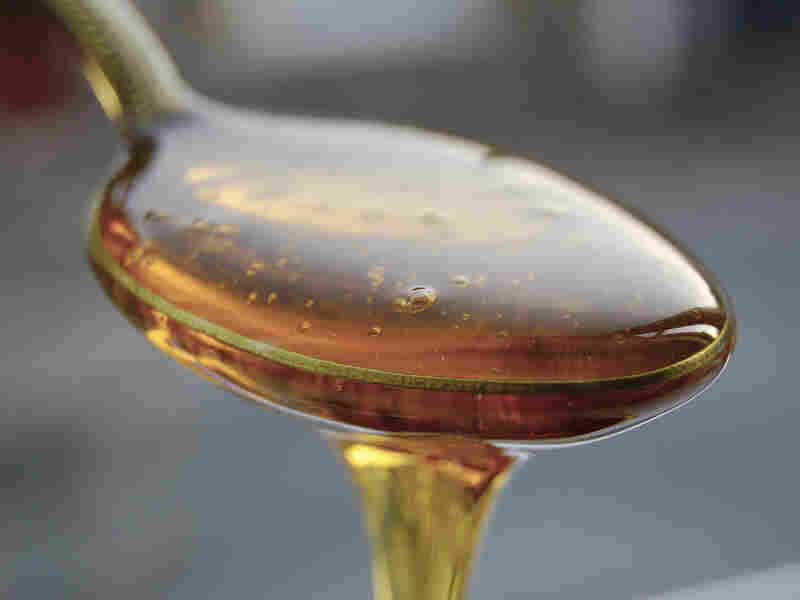 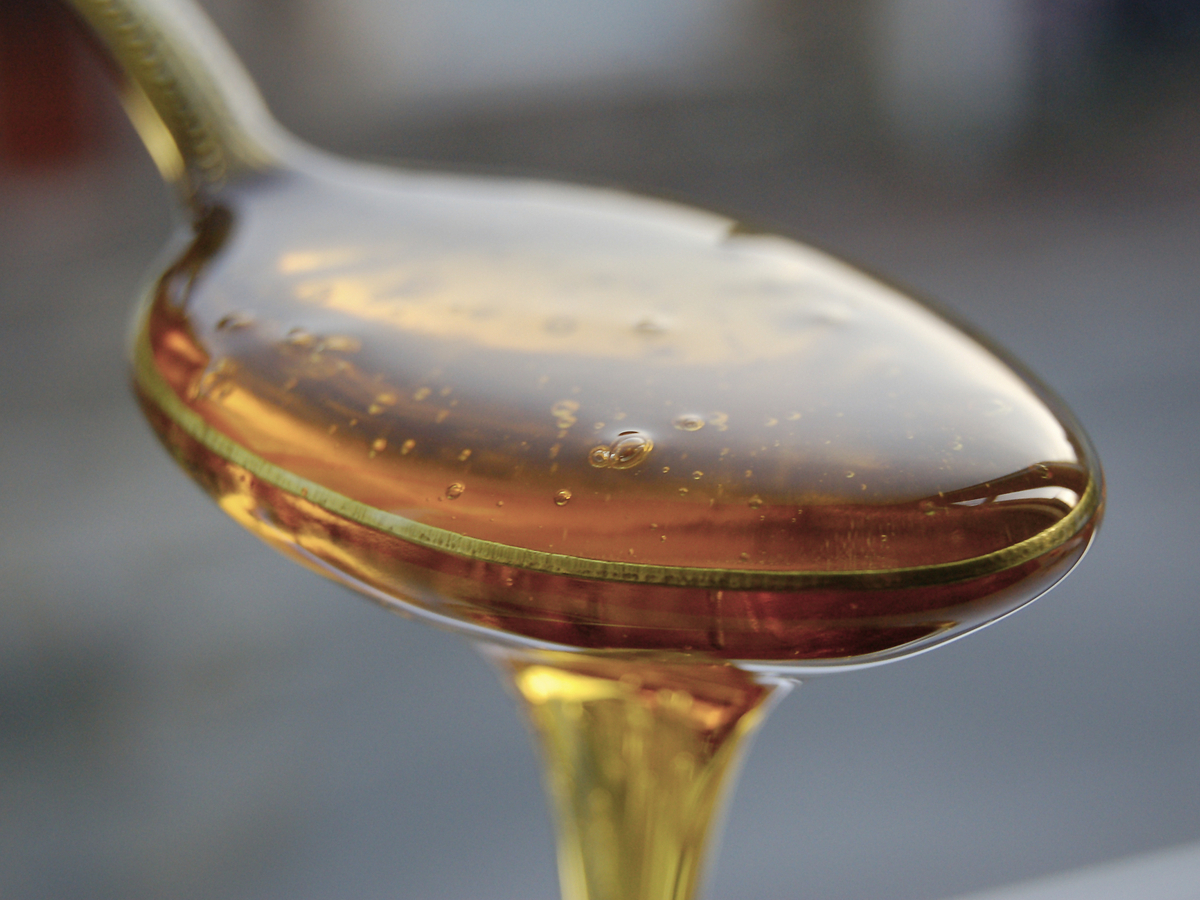 Cabanes à sucre, or sugar shacks, dot the countryside outside Quebec and Montreal. At these rustic outposts, the sap of the sugar maple tree is turned into syrup. The sugar shacks also serve hearty foods that will help keep you warm in the cold climate, often involving the maple syrup produced onsite.

This product, common on American breakfast tables, is not easy to make. It's an involved process that requires not only skill but also patience.

Peter Ogburn is a radio and television producer who loves food and cooking for his family. Originally from South Carolina, he has a soft spot for a good biscuit, pork products and his mama. He will go to great lengths to find out why we eat the things we eat. He also enjoys daring his two young sons to eat things they might otherwise find gross. He lives in suburban Maryland with his wife, boys and giant dog.

"During the winter, the sugar maple must protect itself against freezing to avoid irreparable damage," Picard writes in his 2012 cookbook Au Pied to Cochon Sugar Shack. "To do this, the tree rids itself of most of its water content in the fall and, fortunately for us, produces sucrose, which it stores in its twigs and branches. The sucrose stored in the tree during the winter is only freed the following spring when the tree begins to absorb the water from the thawing ground. It is at that point that it can be harvested."

And that's the easy part. What comes next is the transformation of that clear maple water, or sap, into syrup. This sap is not very sweet when it comes from the tree. It is slowly boiled down until the water evaporates and what is left behind is pure maple syrup. The sap is only about 2 percent sugar, while the syrup has a 66 percent sugar content. It takes 40 liters of sap to make 1 liter of maple syrup.

The result of all that dedication is a complex taste that both grownups and children can sit down and enjoy at the same table. Like roasted Brussels sprouts? Add a little maple syrup before they hit the hot oven. You'll taste the vegetable in a totally new and exciting way. If you like roast pork, a maple glaze will surprise you with how well it complements the other white meat. Today, if you give me a plate with pancakes, bacon and eggs, I'll still flood the whole thing with maple syrup. But I'll also add it to my grown-up dinner dishes.

This is a show-stopper of a dish. A hulking roast slow-cooking in the oven for several hours will perfume your house with an unbelievable porky aroma. The addition of sweet maple syrup elevates this dish to something special. If you can handle the heat, red pepper flakes add a bite to the maple glaze. The dish requires marinating time. 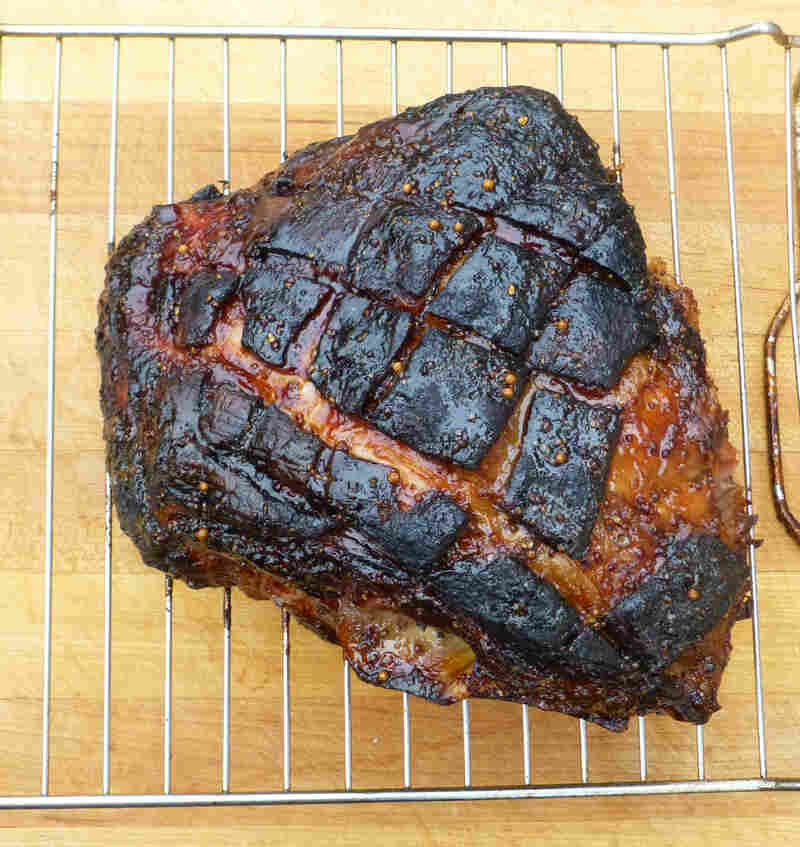 Mix together salt and sugar and coat the pork. Place the pork in a large roasting pan and allow to cure in the refrigerator for 8 hours or, preferably, overnight.

When ready to cook, preheat oven to 450 degrees.

Meanwhile, put a large pot over medium heat and add syrup, mustard, vinegar and, if using, pepper flakes. Cook on the stovetop until it has reduced by about 1/4. Then take off the heat and set aside until ready to glaze the pork.

When the oven is hot, put the pork roast in the oven on a large roasting pan and let it cook for 45 minutes to an hour. You're looking for some color on the roast, but not burned. Drop the heat down to 350 and let it slowly roast for about 5 hours. The meat will be extremely tender.

When the pork is cooked, take the maple-mustard mixture and liberally spoon over the roast. Keep the pork in the oven for another 20 minutes while the glaze caramelizes over the pork. Remove from the oven and let it rest about 15 minutes. Use a fork and shred the pork onto a platter and serve.

(Or do what I did, and toss the formalities. Put the whole roast on the table and encourage diners to pull hunks of meat straight from the roast like a bunch of barbarians. Just seems more fun that way.)

People in your life claim to "hate" Brussels sprouts? This is a good way to change their minds. Be careful not to overcook these sprouts. This simple recipe can become complicated if the sugars in the syrup go past caramelization and burn. 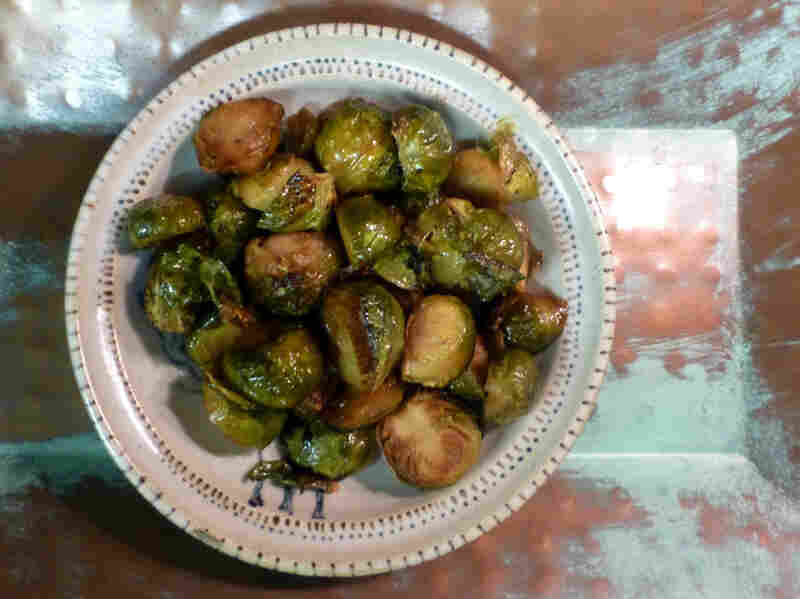 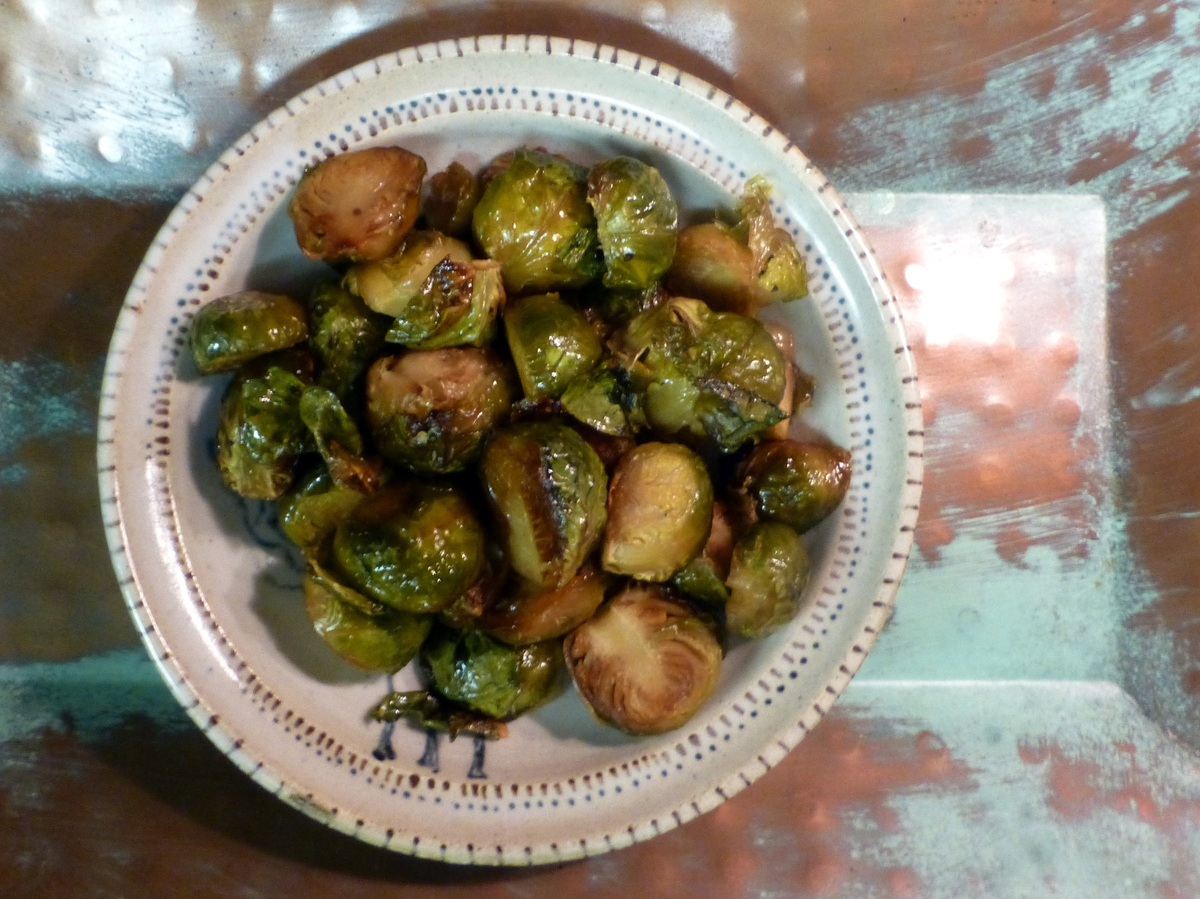 Plenty of salt and pepper

Preheat oven to 400 degrees. In a large bowl, combine all the ingredients. Spread in an even layer in a roasting pan. Roast for about 20 minutes.

While pecan pie is my favorite pie, I can respect the opinion that it's too sweet for some people. This recipe doesn't use the corn syrup that's typical in most recipes. The natural sweetness of the maple syrup can be a little less cloying. 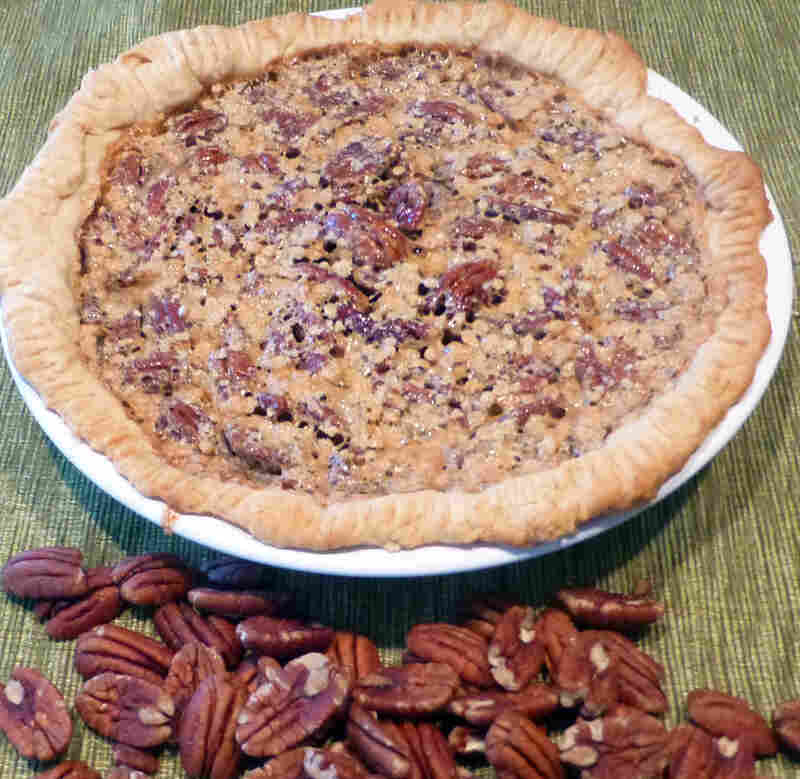 2 cups pecans, toasted (I prefer whole pecans in my pie, but if you'd like to chop them fine, that's perfectly acceptable)

Put a medium-sized pot of water over medium-low and bring to a low simmer. In a large, heatproof bowl, melt butter over the pot of water. This is a double boiler. When butter is melted, remove from the heat source and whisk in sugar and salt until the butter absorbs them.

Slowly add eggs, one at a time, while continuously whisking. Whisk in maple syrup and vanilla until a smooth batter forms.

Return bowl to the hot water and stir until the mixture begins to shine and registers 130 degrees on a candy thermometer. Remove from the heat and stir in pecans.

Pour the mixture into the warm pre-baked crust.

Bake until the filling sets, which should take about an hour. It will have a custardlike consistency. Let cool on a wire rack and serve at room temperature. Some whipped cream definitely couldn't hurt.

Life lesson: The cocktails that taste unassuming can sometimes pack the most punch. This is one of those cocktails. This very simple drink showcases the versatility of maple syrup. The sweetness doesn't overpower, but definitely shines bright in this citrusy cocktail. 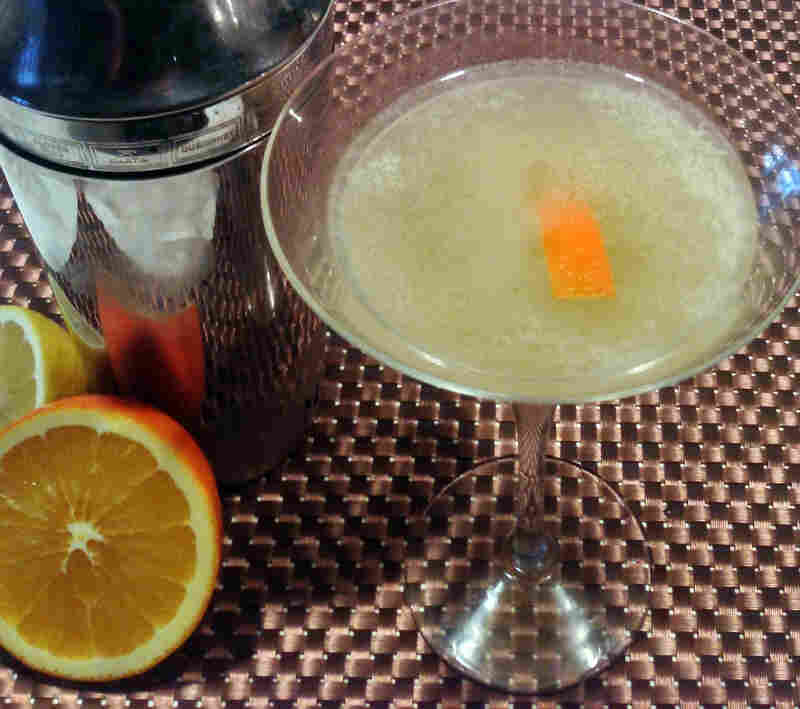 2 to 3 dashes of orange bitters

Combine all of the ingredients in a cocktail shaker with plenty of ice. Vigorously shake the drink until combined, then strain into a chilled martini glass. Garnish with sliced orange peel.