Accessibility links
'Pretty Good' Budget Deal Looks Good Enough To Avoid Shutdown The so-called "omnibus" package of all 12 annual spending bills has more money in it than what Congressional Republicans wanted, but less than what President Obama had asked for. There is some disappointment with the measure on both sides of the aisle, but this time nobody is talking about forcing another government shutdown. 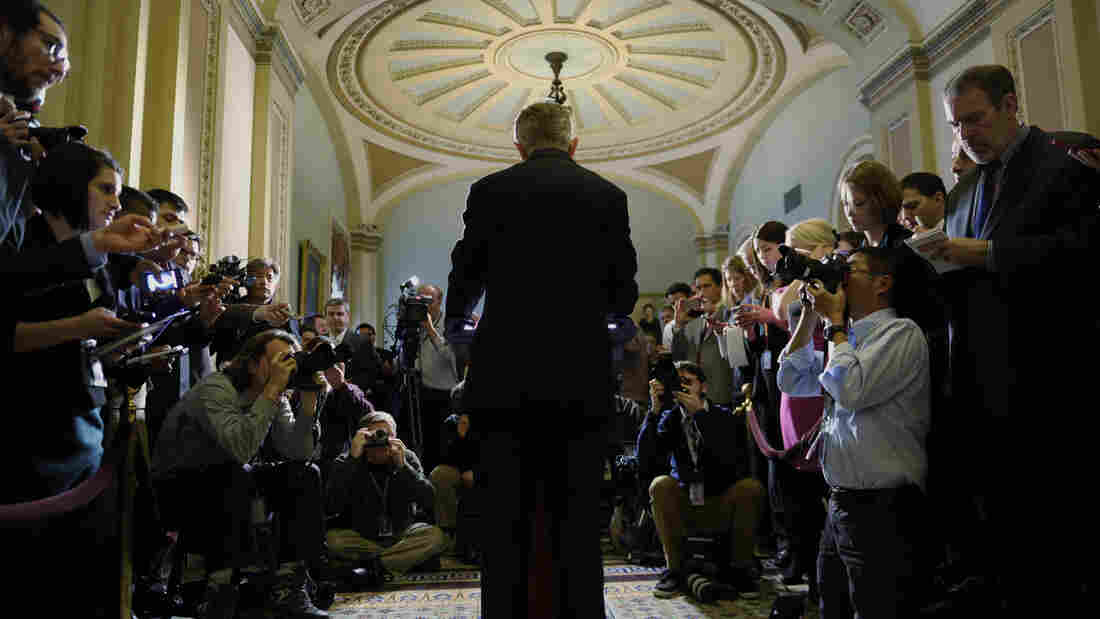 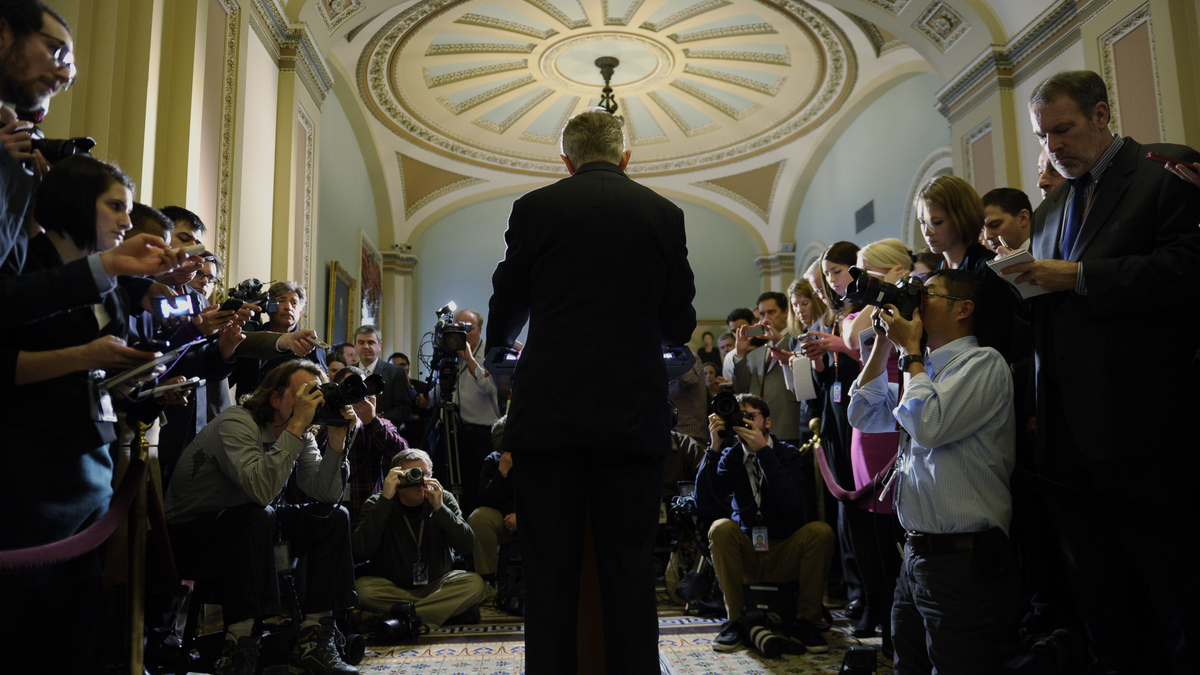 Senate Majority Leader Harry Reid, D-Nev., speaks on Capitol Hill on Tuesday. A massive $1.1 trillion spending bill, aimed at funding the government until October, is getting generally positive reviews, including from House Republicans eager to avoid another shutdown crisis with elections looming.

For the first time in years, the House of Representatives is expected to approve a massive new spending bill Wednesday that keeps federal agencies operating until a new fiscal year starts in October.

The so-called "omnibus" package of all 12 annual spending bills is a compromise; it has more money in it than what Congressional Republicans wanted, but less than what President Obama had asked for. There is some disappointment with the measure on both sides of the aisle, but this time nobody is talking about forcing another government shutdown.

The bill itself is more than 1,500 pages of mind-numbing numbers and instructions, and it's only been available to lawmakers since Monday night. House Speaker John Boehner acknowledges that voting just two days later on an omnibus spending bill the size of a phone book is less than ideal.

"Frankly, if we had time, I would allow, I would like to have more time," Boehner said. "We're in a situation where the government is in fact going to run out of money."

Indeed, funding for the federal government that was due to expire Wednesday is being extended a few more days to move the omnibus through both the House and Senate. As he convened a Cabinet meeting Tuesday at the White House, Obama said he was very pleased with the bipartisan measure the two chambers put forward.

"I would urge that Congress pass that funding measure as quickly as possible so that all these agencies have some certainty around their budgets," Obama added.

Unlike last fall, this time it's been a near certainty that Congress would not let the government shut down over disagreements on funding levels. Kentucky's Hal Rogers, chairman of the House Appropriations Committee, says his fellow Republicans have learned a lesson.

"The shutdown educated ... particularly our younger members ... about how futile that kind of practice is," Rogers said.

A measure banning the Environmental Protection Agency from enforcing carbon emission rules was left out, as were proposed cost-of-living cuts in military pensions for disabled veterans younger than 65. The bill also withholds funds for enforcing a scaling back of incandescent light bulbs and lifts a ban on U.S. agencies financing the construction of coal-fired power plants abroad.

Some of the more conservative measures may have swayed some Tea Party-aligned lawmakers who blocked other spending bills and now support the omnibus.

"I think a lot of our members will be supporting it," said Rep. Steve Scalise of Louisiana, who chairs the 170-member House Republican Study Committee.

Others, however, plan to vote against the package because it continues to fund the Affordable Care Act. Georgia Republican Rep. Phil Gingrey is one of them.

"In fact, I've made a pledge that I will be part of the repeal and replace Obamacare, or I'll go home," Gingrey said.

Conservative groups including FreedomWorks, Heritage Action and the Club for Growth are all urging lawmakers to oppose the omnibus because it spends $42 billion more than the budget passed last year by House Republicans. But there's also opposition to the measure from liberals; they say it does too little to restore deep cuts in social services mandated by the 2011 Budget Control Act.

"I just think that by us continuing as Democrats to affirm that the budget control act is a sane, and fiscally sane, and humanely sane piece of legislation is a mistake," said Rep. Raul Grijalva, a House Democrat from Arizona.

But another Democrat, Maine's Chellie Pingree, says while everything in the omnibus may not be perfect, welcome to Washington.

"Most things that we have done have been so drastically imperfect that a pretty good solution is better than where we've been," Pingree said.

Pingree expects she'll be voting for the bill Wednesday, and it appears that majorities from both parties will be doing so as well.