Accessibility links
To Save Threatened Owl, Another Species Is Shot The rare northern spotted owl species faces habitat loss and, now, intruding barred owls. A biologist, and the federal government, have made a difficult decision — killing one owl to ward off the extinction of another. 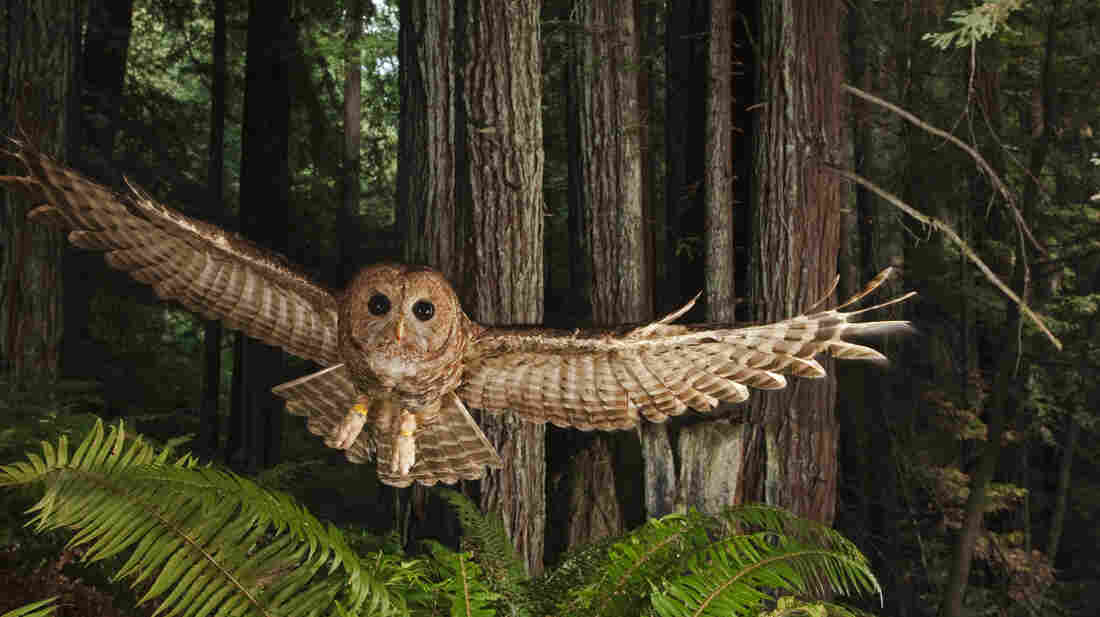 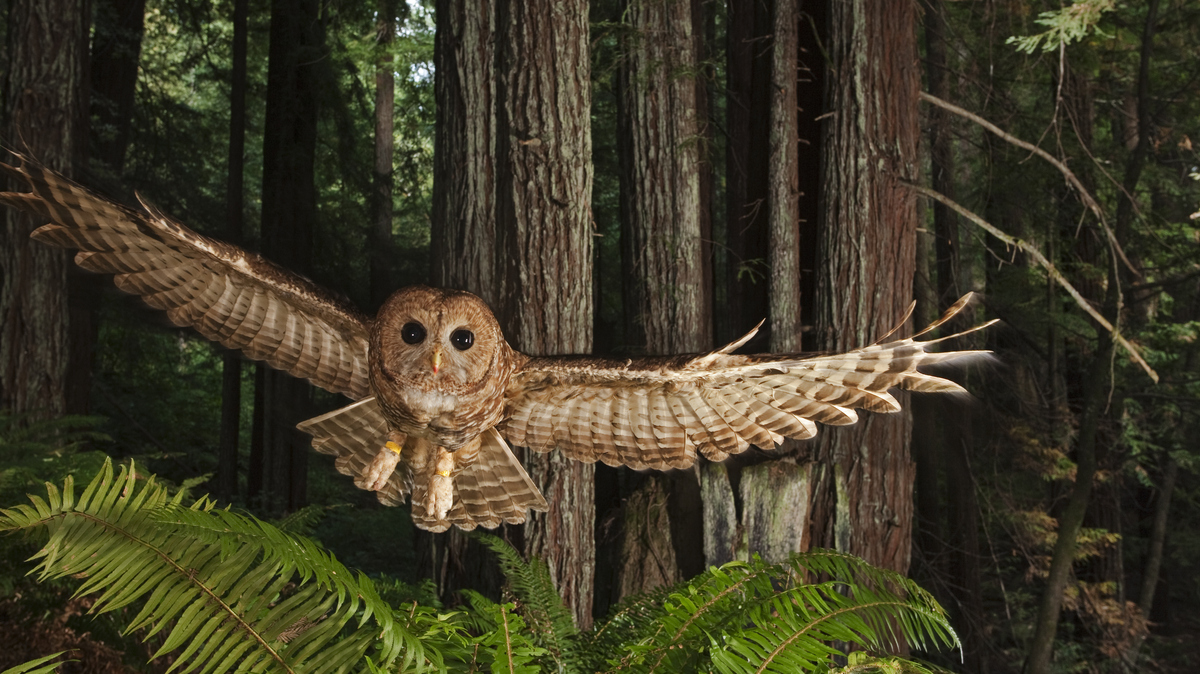 A northern spotted owl in a Redwood forest.

In desperation to save the rare northern spotted owl, biologists are doing something that goes against their core — shooting another owl that's rapidly taking over spotted owl territory across the northwest.

"If we don't do it, what we're essentially doing, in my view, is dooming the spotted owl to extinction," says Lowell Diller, senior biologist for Green Diamond, a timber company.

The decision to shoot the more aggressive barred owls has been wrenching for biologists and the federal government. But one of the biologists says the consequence of not stepping in would be so dire that it justifies what he calls this Sophie's Choice. 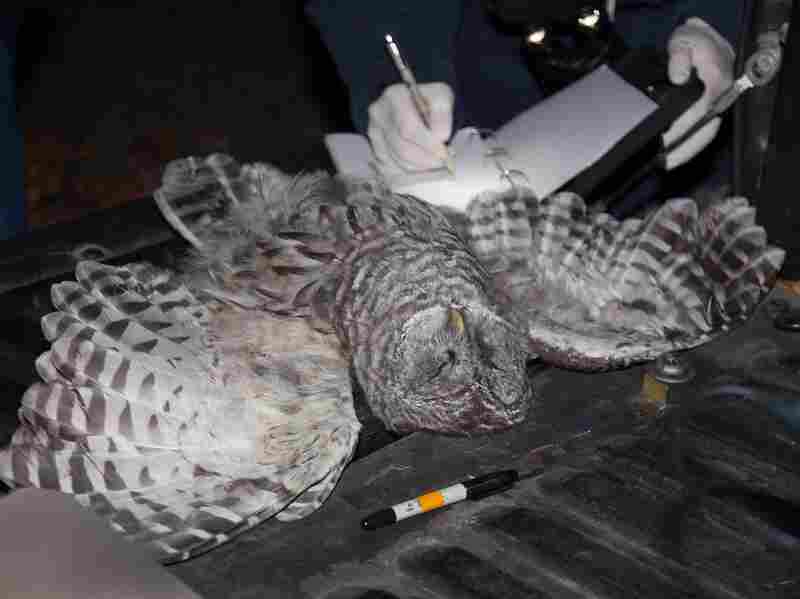 This barred owl was removed in October from California's Hoopa Valley reservation. The barred owl is a species that threatens spotted owl recovery. Courtesy of Lowell V. Diller hide caption 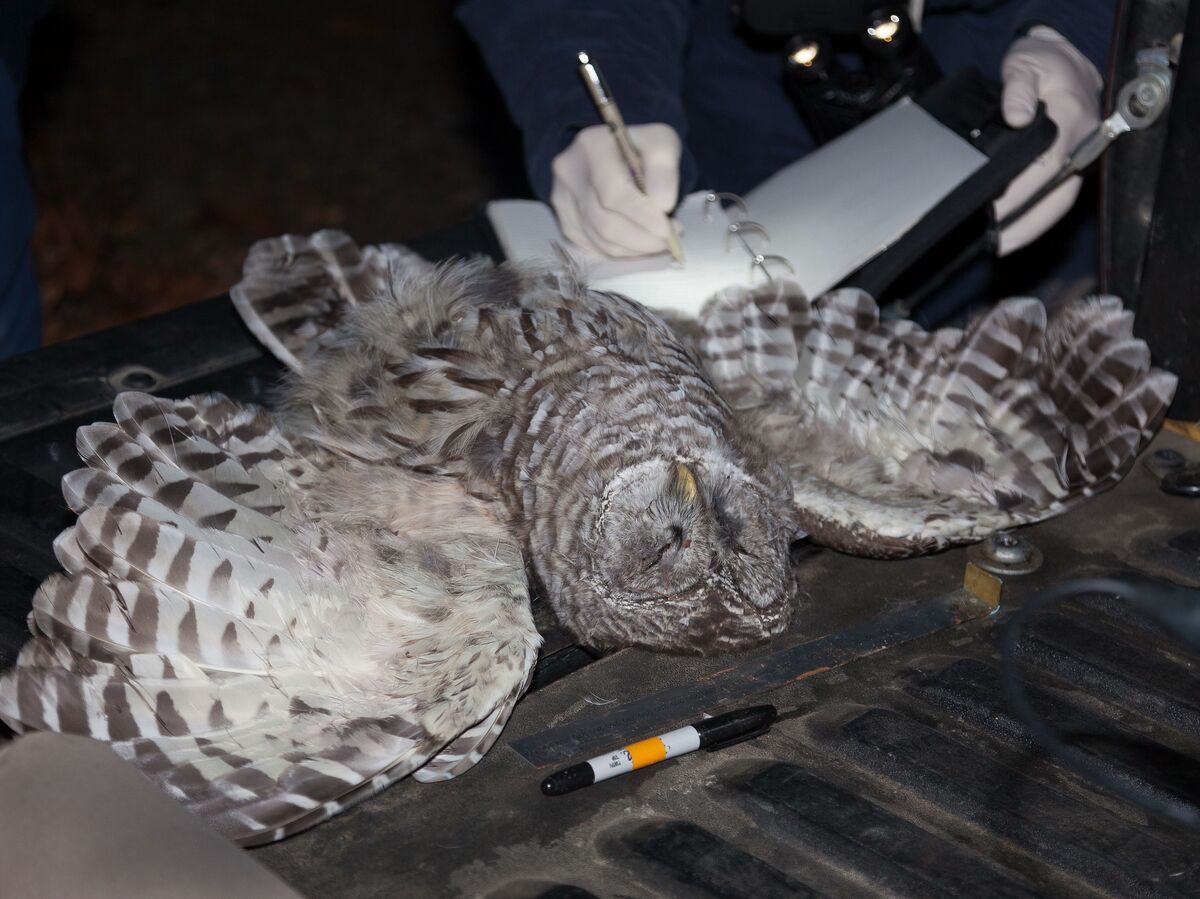 This barred owl was removed in October from California's Hoopa Valley reservation. The barred owl is a species that threatens spotted owl recovery.

A few decades ago, the plight of the spotted owl sparked an epic struggle between environmentalists and the timber industry. In 1990, the federal government put the spotted owl on the endangered species list, giving it a "threatened" designation. Protecting the bird, and the old growth forests where they nest, accelerated the decline of the logging industry in the northwest.

At the time, small numbers of the bigger barred owls, which are native to the east, had already made their way across the continent and into historic spotted owl turf. Now, they are outcompeting spotted owls — disrupting their nesting and eating their food.

During the 1990s, a few barred owls showed up in an area of forest along Redwood Creek that was prime spotted owl territory. Barred owls, which reproduce much faster than spotted owls, now claim nearly all this territory. No spotted owls have nested in this stretch of forest in recent years.

"It's very upsetting and there's nothing that's going to stop this expansion of barred owls from continuing," says Diller, who has studied spotted owls for 25 years. The only feasible solution, Diller says, forces him to go against his nature.

"I Hate It Every Time I Go Out And Do It"

In the forest along Redwood Creek, Diller plays a recording of a barred owl, and soon a pair of real barred owls starts hooting. Barred owls are aggressively territorial — the birds are trying to intimidate what they think is another owl intruding on their turf.

The female buzzes past. Then she perches in plain view, a tactic meant to ward off interlopers that puts the birds in shooting range.

"I think you can appreciate, standing here, how easy it would be — and when I say easy, I mean technically easy or simple — to lethally remove that bird," Diller says.

Diller's a hunter, but he was taught never to kill a bird of prey or anything you didn't plan to eat. At first, someone else did the shooting. But, he says, this felt hypocritical, so he started doing it himself.

Diller recalls the first time he took a shot. "I was so nervous about what I was doing, and emotional, that I had to steady myself against a tree."

Over the past five years, Diller has killed more than 70 barred owls with a shotgun. Each time, he says, it felt "totally wrong."

Removing barred owls without killing them is not feasible, he says. He calculates it takes more than 40 hours to catch a live barred owl — compared to about two hours to shoot and collect one. Finding new homes for the barred owl would also be time-consuming and traumatic for the birds. 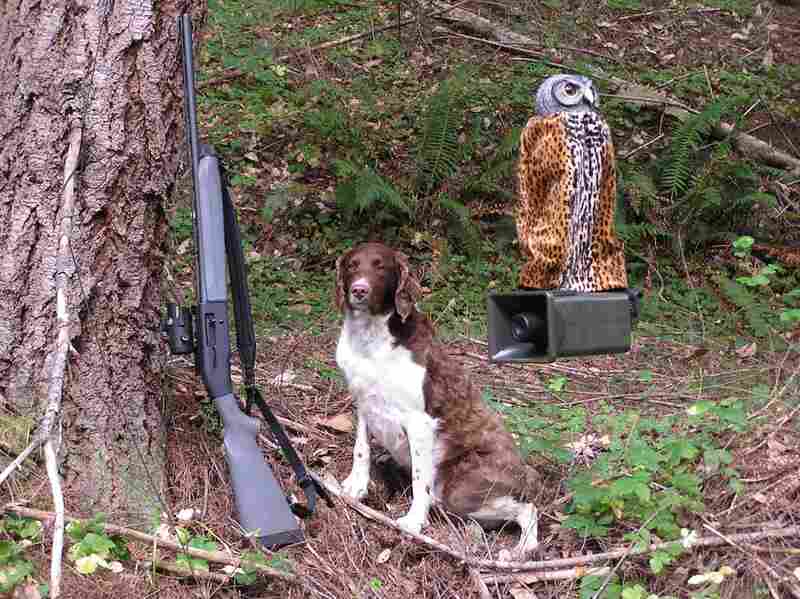 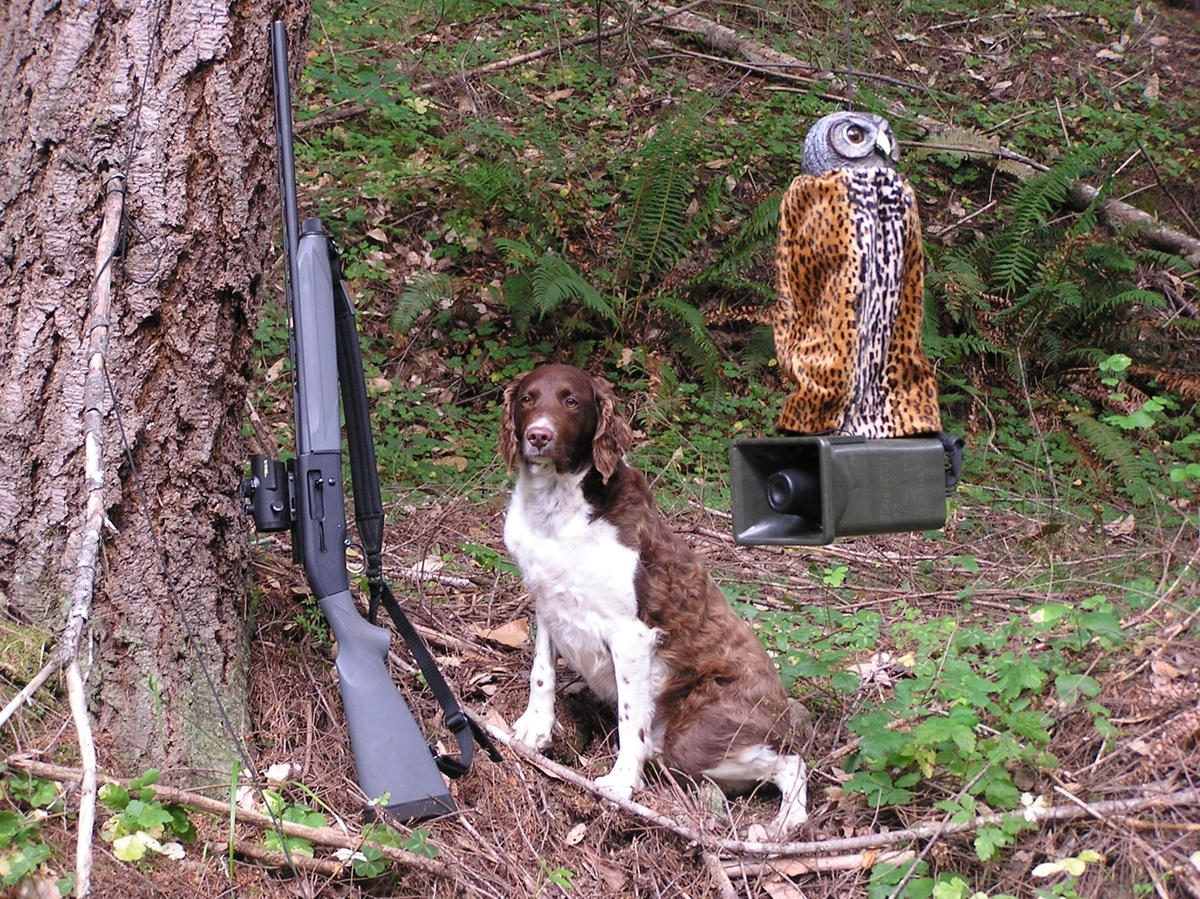 Guns, dogs and owl-calling decoys are used in efforts to remove barred owls. The dogs are valuable in recovering fallen owls, especially at night.

Shoot To Save, Or Leave It To Nature?

Barred owls are not rare. Still, shooting them has presented such a quandary to the U.S. Fish and Wildlife Service that it has taken more than seven years come to this solution.

Although the agency made an exception for Diller, it's illegal to shoot barred owls, under the Migratory Bird Treaty Act.

On the other hand, the Fish and Wildlife Service can't ignore the invasion because it's legally required to help rare species under the Endangered Species Act. The agency even hired an ethicist, Clark University's Bill Lynn, to help wildlife experts resolve the dilemma.

"People recognized there's a crisis for the spotted owl, that barred owls are part of the cause of that crisis and, so, they reluctantly, essentially justified the experimental removal of barred owls," Lynn says.

The Fish and Wildlife Service is starting a four-year experiment to kill up to 3,600 barred owls in the northwest.

The birds will be removed from four different forests, two in Northern California, one in Oregon and one in Washington. Some birds will be captured but not killed.

The federal government says if spotted owls come back after barred owls are removed, it may decide to kill barred owls over a broader area.

An advocacy group, Friends of Animals, is suing to stop the experiment.

The group doesn't believe the government can make a moral argument for shooting an animal, even if it would benefit another animal.

"To go in and say we're going to kill thousands and thousands of barred owls, literally forever, I don't see that as being a solution. At some point you have to allow these species to either figure out a way to coexist or for nature to run its course," says Michael Harris, legal director of Friends of Animals. 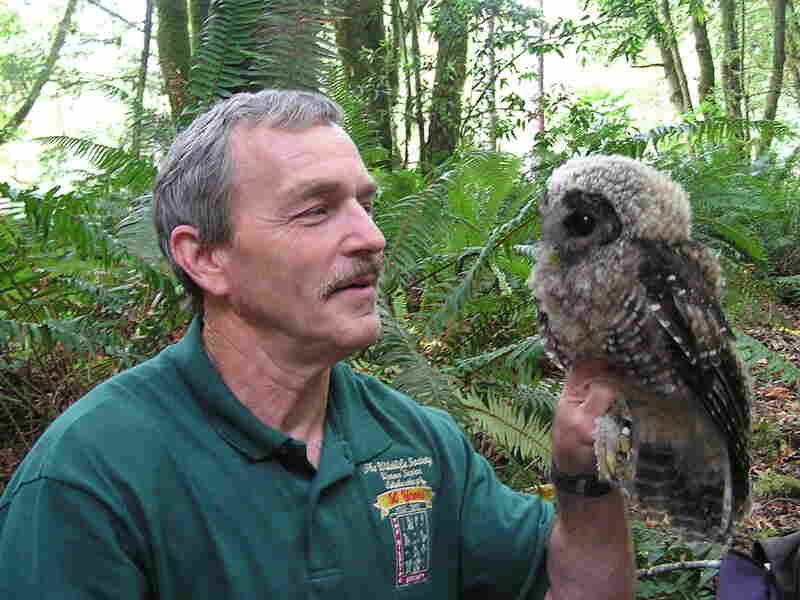 Lowell Diller holds a fledgling spotted owl that he banded at a site where barred owls had been removed. "This owlet would almost certainly not be alive today without active intervention," he says. Courtesy of Lowell V. Diller hide caption 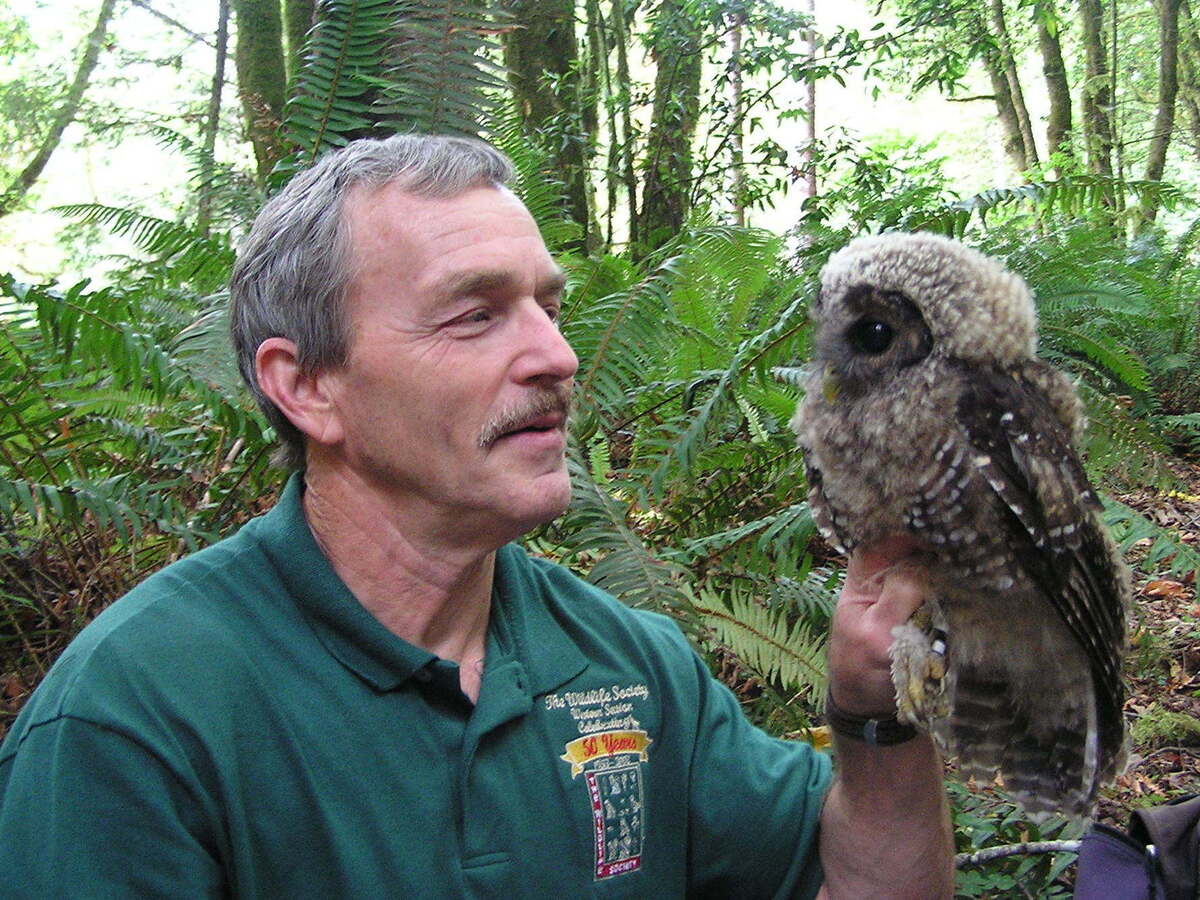 Lowell Diller holds a fledgling spotted owl that he banded at a site where barred owls had been removed. "This owlet would almost certainly not be alive today without active intervention," he says.

But Diller argues this is an "absurd thing to say" after all the ways humans have altered nature. People cut down most of the forests that used to host barred owls. They made lots of changes to the Great Plains, which he believes helped the barred owl move across the continent.

So, he says, people should at least try to save the spotted owl. And nearly everywhere he shot barred owls, he says, spotted owls came back — and had owlets too.

Along the Mad River, Diller scrambles through a young redwood forest to track down a pair of spotted owls. He feeds them mice so he can see the bands on their legs. The polka dot markings tells him the owl settled here in 2009, after he shot barred owls nearby.

For Diller, seeing rare spotted owls thrive in this forest is success worth the agony of shooting barred owls.

"Probably what makes spotted owls so special is the fact that as you just witnessed, they fly right up to you," Diller says. "You get to interact with them. It's almost impossible as a biologist not to fall in love with these birds — they're just the neatest animal."

Diller hopes the public also will see the value in saving this beautiful creature.