Accessibility links
Movie Review - 'The Nut Job' - A Churl Of A Squirrel, On The Make In The Big City The animated comedy The Nut Job follows a selfish squirrel (Will Arnett) as he gets involved in a nut heist, makes some really corny jokes, and learns to cooperate with the other critters in his community.

A Churl Of A Squirrel, On The Make In The Big City

A Churl Of A Squirrel, On The Make In The Big City 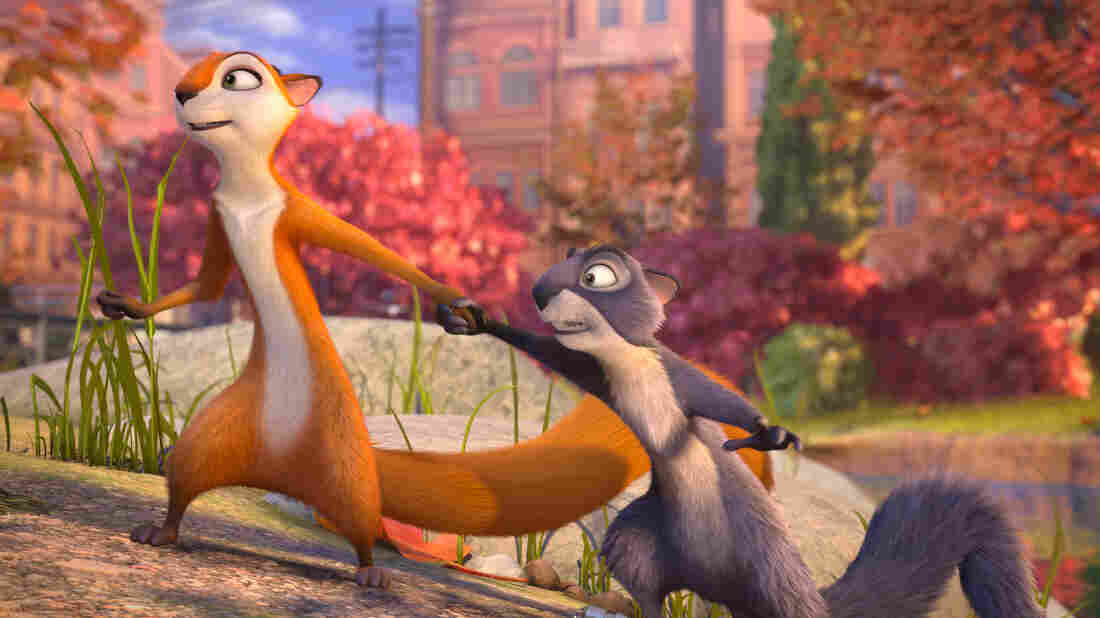 Squirrels Andie (Katherine Heigl) and Surly (Will Arnett) start out on opposite ends of the moral spectrum in The Nut Job. Toonbox Entertainment, Ltd. hide caption

Given the feel-good themes of the average kids' movie — be yourself, follow the golden rule, love each other, blah blah blah — it's refreshing to see an animated comedy chuck that guck and focus on a real jerk. Not a misunderstood Princess Elsa, or a Wreck-It Ralph with a heart of gold, but an out-and-out, two-bit, sell-you-down-the-river-if-it-would-save-his-own-fur shyster.

The sour (and strangely purple) squirrel at the center of The Nut Job is appropriately named Surly, in fact. He's a pariah among the diverse woodland creatures living in the refuge of a small park in the middle of the busy metropolis of Oakton. And unlike your diligent everyday squirrel, busily storing up food for the winter, Surly — voiced by Arrested Development's Will Arnett as a mix of hard-bitten loner and slick wise guy — lives by his wits from score to score, with no help from anyone else unless you count the bumbling assistance of Buddy, his rat sidekick. (And it's clear that even Surly doesn't really count him.)

Buddy's adoration of Surly, of course, and Surly's tolerance for the goofy rat, are there to telegraph that, hey, under that squirrel's prickly exterior he's actually a good guy. And for The Nut Job to get to the heartwarming place it must, Surly surely can't stay selfish to the end, right? Still, to the movie's credit, it keeps its antihero's motives anything but altruistic for quite a while.

When his scheme to hit a nearby street vendor and take him for all the nuts in his cart collides with the plans of Andie (voiced by Katherine Heigl) and Grayson (voiced by Brendan Fraser) — two squirrels sent by the rest of the animals to pull off the same theft on behalf of the larger critter community — Surly refuses to share anything. Of course, his machinations lead to a spectacularly choreographed catastrophe that destroys even the inadequate food supply the park residents have managed to, um, squirrel away. The community's commanding leader, a raccoon voiced by Liam Neeson, calls a vote, and Surly is banished to the unforgiving city.

For all its genuine exploration of the costs and benefits of the individual's relationship with the collective — and later, the true nature of heroism — The Nut Job is basically a comedy for kids, an acorn-in-a-slingshot picture that targets the lowest common denominator and hits hard. There are bad puns about nuts (almost none of which work), music choices that are both anachronistic (it's set in the 1930s) and instantly dated ("Gangnam Style"?), and rote gags involving animals who easily survive electrocution or brickbats; the latter serve mostly to complicate the stakes, which elsewhere are literally life and death.

Where the movie finds its paws is in its old-fashioned heist plot, kicked off when Surly discovers the ultimate score in a store that sells nuts, and only nuts — a shop that's also the scene, coincidentally, of another robbery-in-the-making, this one involving humans using the site's basement to dig through to an adjacent bank. Once Surly and Buddy case the joint, develop a plan, and deal with the inevitable surprises, The Nut Job could be any classic caper flick.

There's the standard motley crew of conspirators, here comprised of squirrels, gophers, a rat, a mole and a pug — owned by the human leading the bank job — who just wants to get in on the fun. There's excitement over the risk and the potential reward, a betrayal or two, and some legitimately thrilling set pieces as the complications in both heists add up.

Of course, there's the stirring question posed to the once-independent con artist when his heart begins to soften — does he take the loot all for himself or help the community? If you're able to forgive the movie's occasionally nutty (and groan-worthy) jokes, it delivers an interesting and satisfying answer.