Accessibility links
About 6,000 Natural Gas Leaks Found In D.C.'s Aging Pipes Pipelines conveying natural gas in Washington, D.C., are old and wearing out, with approximately four leaks per mile, a recent scientific survey of the pipes suggests. Researchers say the average amount of methane lost to leaks in Washington seems to be more than twice the national average for cities. 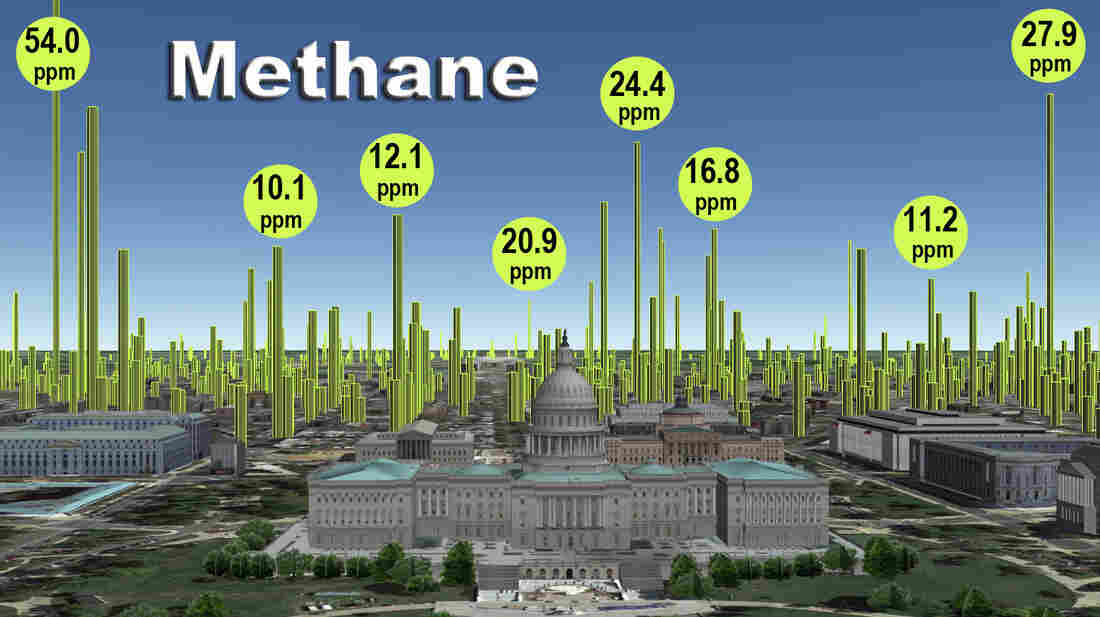 A close-up schematic of leaks near the U.S. Capitol shows high leak densities east of the building, but few leaks over the National Mall, where very few natural gas pipelines exist. Robert B. Jackson/Environmental Science and Technology hide caption 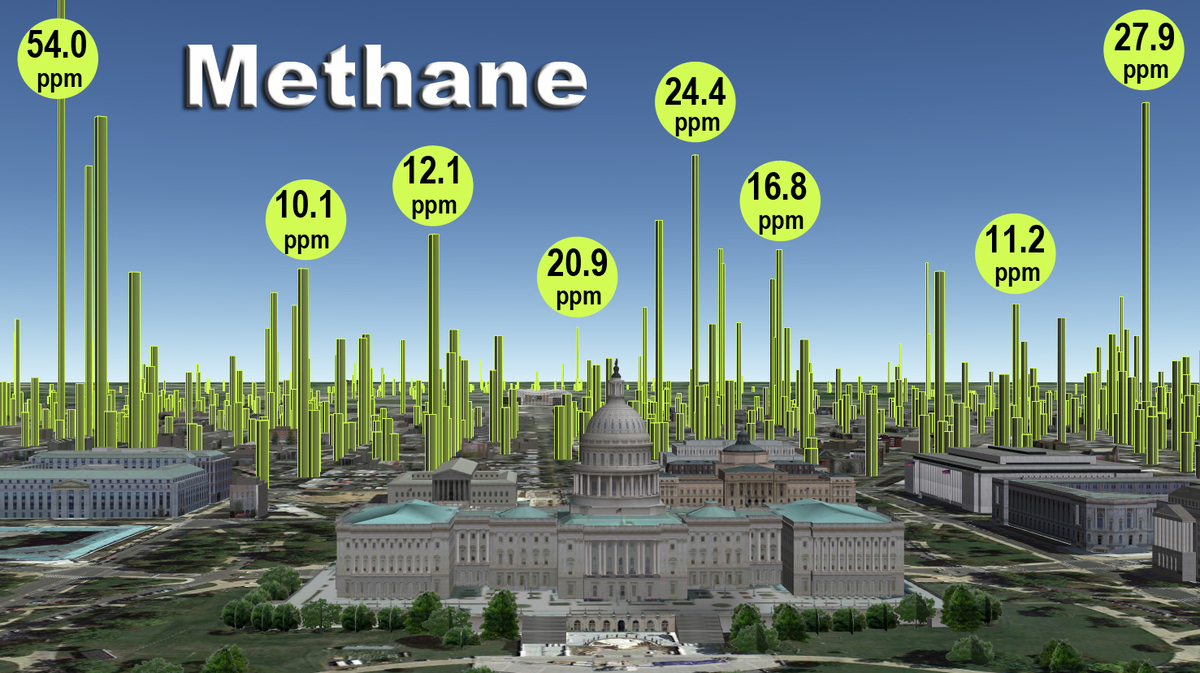 A close-up schematic of leaks near the U.S. Capitol shows high leak densities east of the building, but few leaks over the National Mall, where very few natural gas pipelines exist.

Robert B. Jackson/Environmental Science and Technology

The nation's capital is a pretty old city by American standards. It dates back to the late 18th century. Despite frequent face-lifts, parts of it are wearing out — for example, its underground gas pipelines. New research shows that Washington, D.C., suffers from thousands of leaks of natural gas.

Four leaks per mile is even more than the scientific team found in Boston in 2011, where it did the same thing — drive the streets with a special instrument that detects methane (the main component in natural gas). In fact, the average amount of gas lost to leaks in Washington is more than twice the national average for cities.

Jackson adds that at many sites he measured, the concentration of methane in the air was higher than anything he saw in Boston. And it's not swamp gas. Jackson's technique identifies the type of methane by its chemical structure and the presence of ethane and propane with it, forms of gas not usually found with the so-called biogenic methane created by rotting plants, bacteria and the like.

In 12 cases, the gas concentration was potentially explosive. Jackson says he informed the local gas company about those early last year. 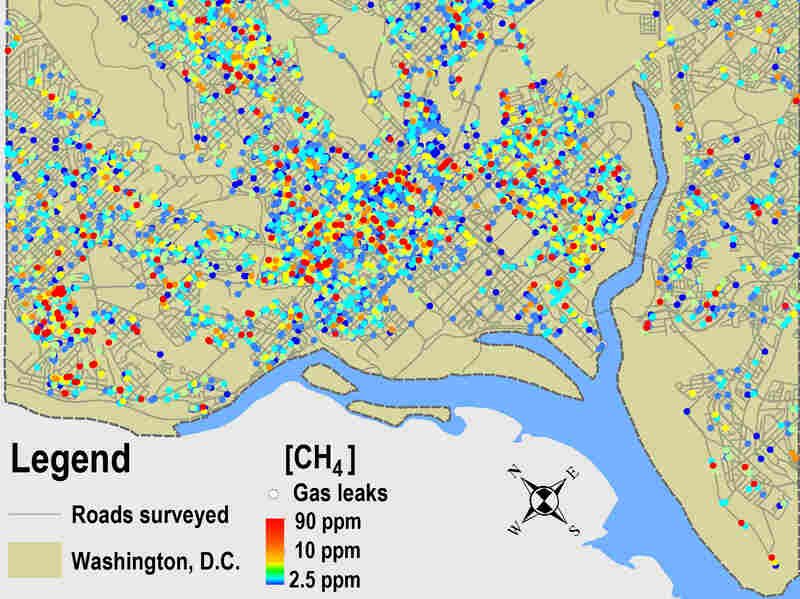 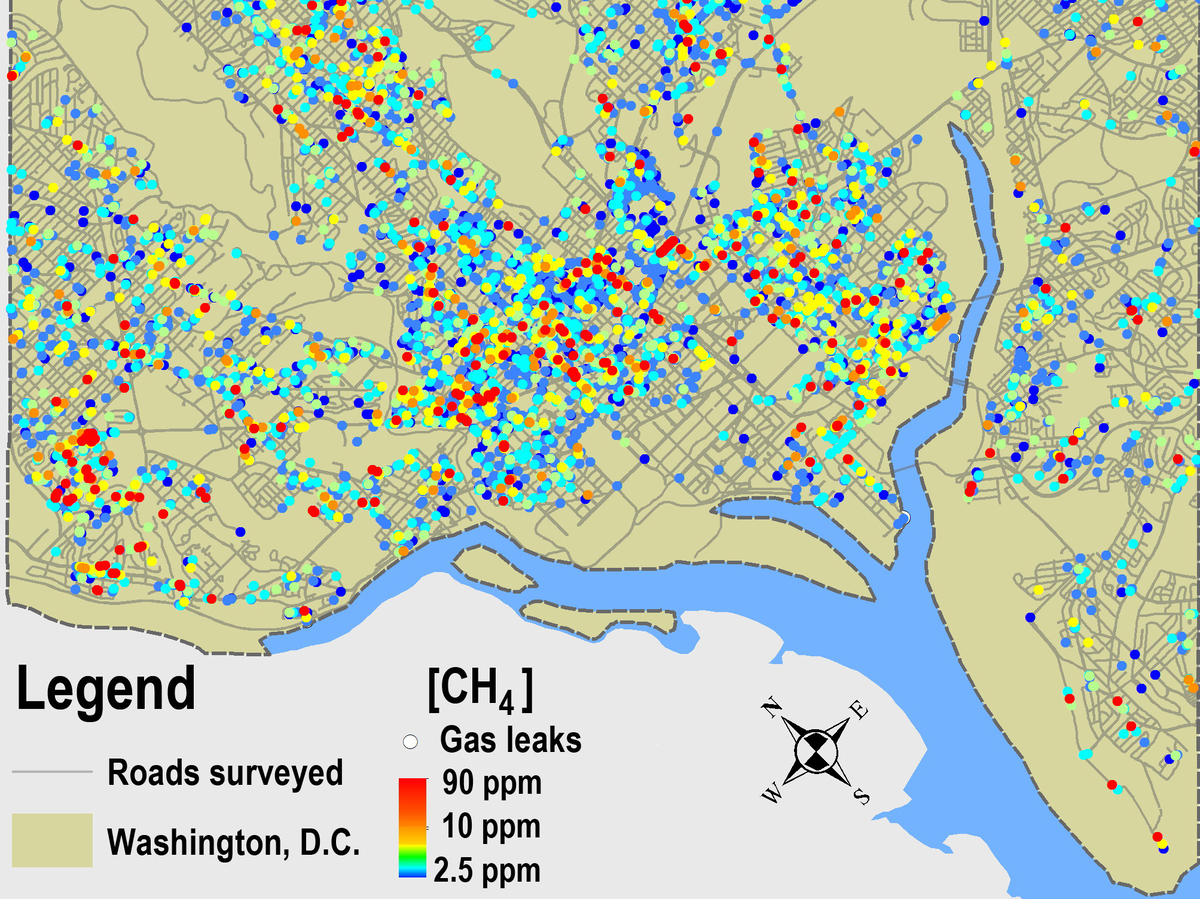 Methane leaks mapped across the 1,500 miles of roads of Washington, D.C.

"The really surprising thing," he says, is that "when we went back four months later after calling in these leaks, nine of the 12 hadn't been fixed. And that really shocked me."

The city's gas company, Washington Gas Light Co., declined an interview request about this study, published this week in the journal Environmental Science and Technology. In a written response, the company said it "immediately responds to every report of natural gas odor, and repairs leaks 7 days a week, 24 hours a day, 365 days a year."

Jackson notes that leaks can be hard to trace without the kind of sophisticated equipment he uses. Moreover, he doesn't track the leaks down to their exact location on a pipeline. Sometimes whole blocks have to be investigated to find one leak. Also, one-third of Washington's gas mains are cast-iron — an old technology that's prone to leaks. Washington Gas is replacing many of these.

But plugging leaks is like plugging holes in a dike. "We have been plagued by a series of ongoing gas leaks," says Doug Johnson, who lives in an older part of the city. As in much of the District, there's remodeling going on all around him, with lots of new construction, heavy equipment and truck traffic. Johnson says gas company workers return over and over to fix leaks on his block, and he always asks the workers, "What's going on?"

"Basically," he says he's told, "these streets weren't really built to handle the large construction, the cranes." He says workers tell him, " 'You know, the pipes are old. They're being put under enormous stress — that probably is your answer right there.' "

Besides the inconvenience and the cost of lost gas that customers have paid for, methane leaks contribute to global warming. Duke's Jackson is one of many scientists measuring how much methane comes from cities, industry, and farms, but it's been hard to get consistent numbers.

"The scientific community is still trying to figure why those differences occur," Jackson says, "and what the differences are in practices that might explain them." Oil and gas operations are the biggest contributors to methane from human activities in the U.S. (for many countries the biggest methane contributor is livestock), but cities appear to be significant contributors, too.

Even within Washington, there was a lot of variation in leak levels. One area that turned out to be fairly gas-free was the National Mall — with the White House near one end and Congress at the other. Science is full of surprises.