Accessibility links
What Makes globalFEST So Interesting? Even when your smartphone can bring you music instantly from any country, it's great to spend a night sampling international acts live from Europe, Africa, Asia and beyond. Now in its second decade, the New York festival attracted a dizzying variety of music, personalities and wacky hats. Hear some of the most buzzed-about artists from this year's edition. 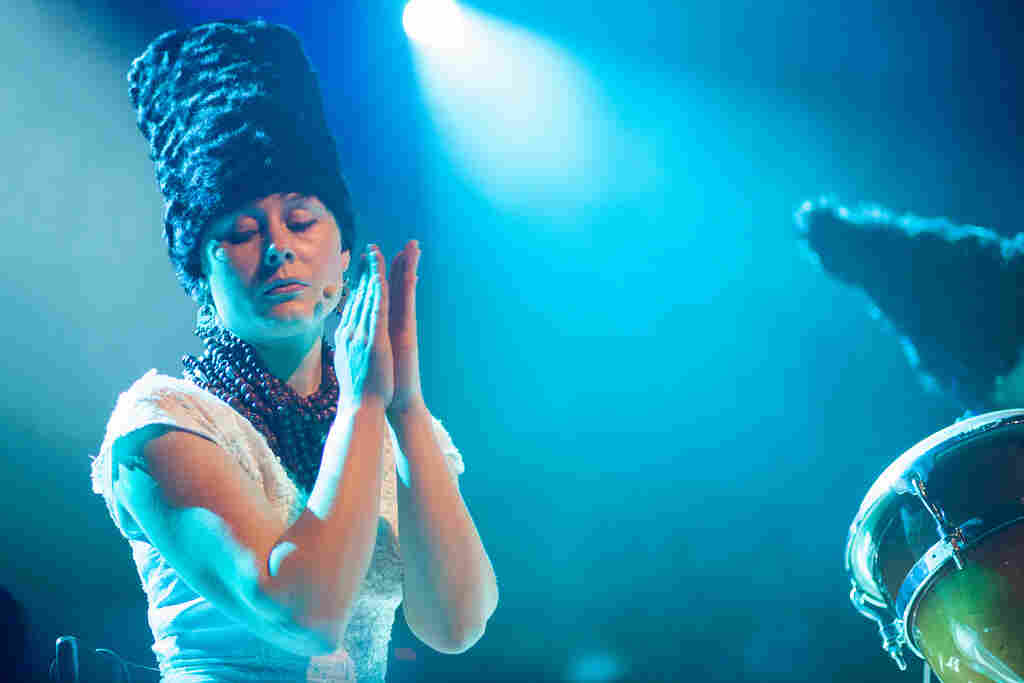 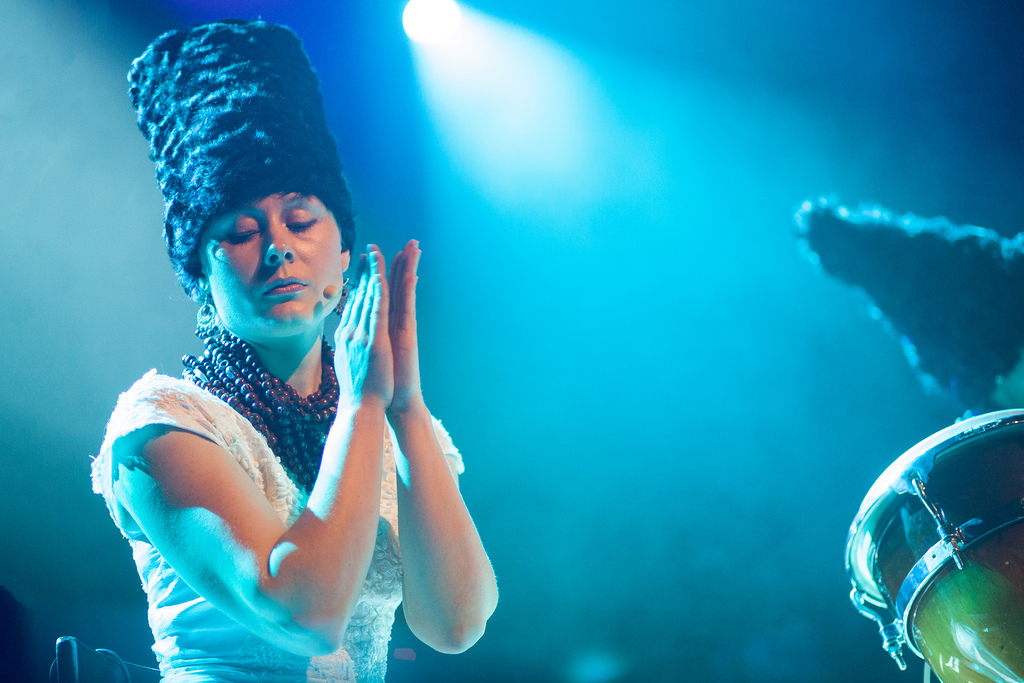 Every January, there's a one-night music festival in New York that showcases artists from around the world. It's called globalFEST, and it's been happening for more than a decade. Over the years, it's become a place for American tastemakers to find new talent from Europe, Africa, Asia and beyond.

This year's edition, held Sunday at New York City's Webster Hall, was no exception. One of this year's most buzzed-about artists was Baloji, a Congolese-Belgian rapper and singer who mixes older styles, like Congolese rumba and soukous, with hip-hop.

If that sounds earnest and academic, it definitely isn't. This is party music. And as Baloji also said from the stage during his set, "This isn't 'world' music — this is our music." He mixes all of these sounds, but aims for the soul and swagger of a James Brown, too. Baloji works hard on stage — he started off his performance in a very sharp suit jacket and bow tie, and by the end of his set, he was in rolled-up shirtsleeves, sweating and dancing and really working the crowd. And he had them wrapped around his little finger.

But isn't "world music" supposed to be more ... traditional?

Let's get this out of the way: Even within the "world music" community, nobody likes the term "world music." It smacks of all kinds of loaded issues, from cultural colonialism to questions about what's "authentic" and what isn't (and who might get to police such inquiries), and forces an incredible array of styles that don't have anything in common under the label of "exotic Other." What's more: I believe that in many people's imaginations, "world music" means a kind of fairly awful, gloppy, hippy-ish, worldbeat fusion. It's a problematic, horrible term that satisfies absolutely no one.

Having said all that: The simplest answer is that the bookers of globalFEST — three respected curators and concert presenters in New York — look for music rooted in a specific time and place, whether that's Chinese folk music or African hip-hop. And the globalFEST organizers — Bill Bragin, director of public programming at Lincoln Center; Isabel Soffer, founder of Live Sounds, which produces concerts in New York City and collaborates with artists and organizations around the world; and Shanta Thake, director of Joe's Pub, a performance space at the Public Theater in New York — are sensitive to all that baggage attached to the term "world music." And even when they include artists who consciously mash up different genres, they choose those who do so from a particular point of view.

One such act this year is a band called The Bombay Royale, from Melbourne, Australia. Their shtick is to mix '60s surf rock with the sounds of vintage Bollywood while everyone is in costume and character, which gives off a bit of a strenuously arranged "We're going to be wacky!" aura. There's a little bit of The Village People thrown into the mix, too. It's a bit too much of a novelty act, but loads of fun nonetheless.

A World Of Live Music, Captured With Pen And Paper

And while we're bending the definition of what is and isn't "world music" — globalFEST showcases American musicians. For example, this year's lineup included a really great trio of gospel singers from Mississippi called the Como Mamas, as well as Sergio Mendoza y la Orkesta from Arizona. Mendoza's group does a mashup of old-fashioned mambo, regional Mexican music, that shuffling cumbia rhythm that's popular now all over Latin America and a load of other Latin styles.

But with the Internet, and being able to access nearly any musician in the world at the tips of your fingers — is a one-night event worthwhile? And do we still rely on tastemakers to get us access to musicians?

In short, yes to both. A showcase like this allows fans and industry folks to hear these artists live. (We've all had the experience of hearing bands whose recordings we love be fairly disappointing onstage.)

Also, there are some real tactical issues for bookers, agents and labels to take into consideration when it comes to booking international acts. Especially during the financial crisis, it's become extremely expensive for foreign artists to tour the U.S. And after September 11th, it was hard for a long time for many foreign artists to get visas from the State Department to tour this country. And because the U.S. is simply so big, it's tough for bands to make enough income here to cover the costs of flying here, then flying or driving between gigs spread out across the country. So after globalFEST sets, you see groups of bookers — say, a couple of people from California, a few Midwestern presenters, a few East Coast folks — huddled together in the back corners of the room. They're figuring out how to bunch up tour dates for the bands they just heard, to make American tours viable.

From globalFEST 2014, I think my personal big new find is a female artist from the northwest African nation of Mauritania. Her name is Noura Mint Seymali. It's not like we hear a lot of music from Mauritania in any case — it's a pretty remote and closed-off place. But this lady shakes the rafters with her voice, and she outsings many of the accepted tropes about "desert blues" and music from around the Sahara.

If there are any trends to emerge from such a wide-ranging festival, I think that we're seeing a tip towards big, nearly theatrical acts. Take the band DakhaBrakha, for example. They're a group from Ukraine that was founded by members of an underground theater troupe, and they've turned what they call "Ukrainian folk-punk" into an epic live show that involves a lot of fog machines, super-tall furry black hats (which they should consider selling after shows as an additional revenue stream), and fierce and wide-ranging musicianship. Audiences love it, and I think we'll be seeing more and more of that kind of visual spectacle in the months and years to come.