Accessibility links
Movie Review - 'Jack Ryan: Shadow Recruit' - A Spy Gets A Makeover, And A Quick Trip To Moscow Tom Clancy's wonkish spy returns in a new thriller from Kenneth Branagh, with Star Trek's Chris Pine in the title role and the director playing a menacing Russian bad guy out to bring the U.S. to its knees. 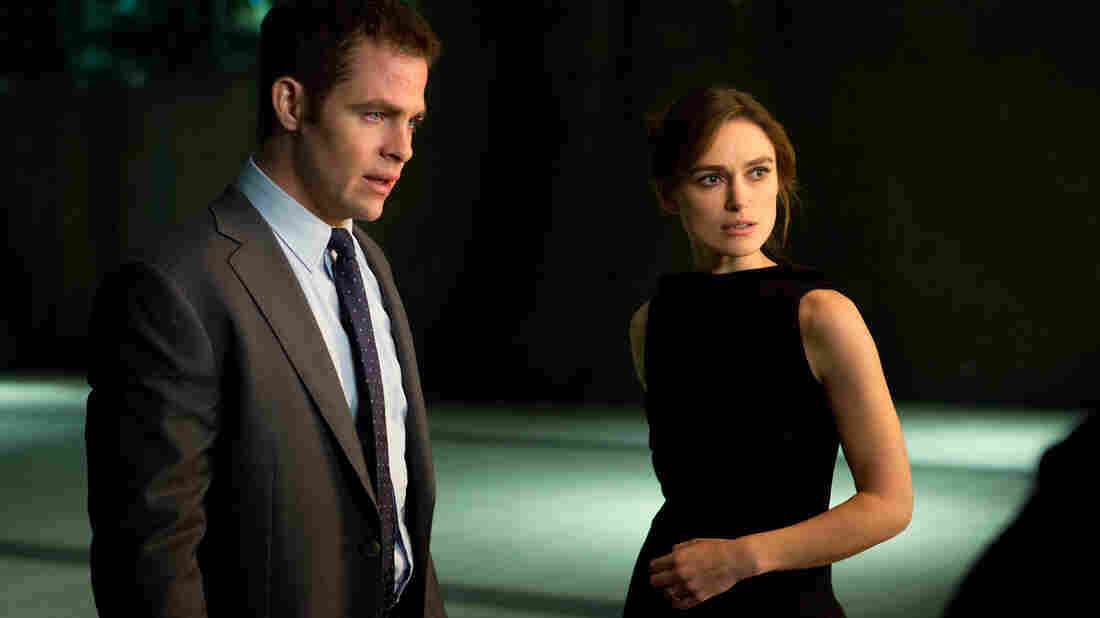 Rated PG-13 for sequences of violence and intense action, and brief strong language

Maybe a business reporter would be the best person to talk about Jack Ryan: Shadow Recruit. From an artistic standpoint, I found it competent, moderately suspenseful and without a single surprise — apart from the fact that its director is Kenneth Branagh, who has come a long, grim way from his film directing debut in the late '80s, Shakespeare's Henry V. Come to think of it, that was a remake, and the Henry character appeared in two other plays — though I'm confident Shakespeare never referred to "the Henry franchise."

And Jack Ryan is no Henry. Created by the late novelist Tom Clancy, he's a Wall Street guy turned CIA agent turned action hero. He has appeared in four big movies: The Hunt for Red October starred Alec Baldwin, who gave up Ryan and was replaced by Harrison Ford in Patriot Games and Clear and Present Danger. Then came an attempted reboot called The Sum of All Fears with Ben Affleck, which did pretty well but didn't lead to more movies.

Jack Ryan: Shadow Recruit launches a new storyline, with a young Jack played by Chris Pine, who's also the young Captain Kirk in the reboot of the Star Trek franchise for the same studio, Paramount. He's the go-to franchise guy, I guess, though I'm not sure why. He's a good enough actor — he seethes credibly and moves well, but there's nothing funky or idiosyncratic about him. He's just a guy.

The movie begins with Ryan as a student at the London School of Economics when the planes hit the World Trade Center. So he joins the Marines and gets shot down in Afghanistan. As he's rolled into the emergency room, a Marine says Ryan personally dragged two survivors out of the plane. "With a broken back?" asks the doctor. The message is: This guy isn't just an economics wonk. He's the man.

As Ryan struggles to walk at Walter Reed Medical Center, Kevin Costner shows up and offers him a CIA job — undercover in a Wall Street firm. Fast-forward to 10 years later, when he uncovers a Russian plot to destroy the U.S economy. In no time he's dispatched to Moscow to confront the likely mastermind, played by Branagh himself.

The movie is slow and plodding until an attempt on Ryan's life and the first brutal gun-and-fisticuffs scene, shot mostly in jangly close-ups. Then Ryan's doctor girlfriend, played by Keira Knightley, shows up in Moscow because she doesn't know he's CIA and thinks he's having an affair. She's quickly embroiled in the cloak-and-dagger stuff, leading to a quarrel that's the only memorable scene in the picture, thanks in part to Costner's expert underplaying.

That scene is the start of a long and clever third act that begins in a fancy Moscow restaurant and ends in the Hudson River, involving decent fights, noisy car chases and the usual ticking time bomb. I found a lot of holes in the plot, though to point them out here would spoil too much. But espionage movies are often fun — it's the brainy popcorn genre — and Jack Ryan: Shadow Recruit hits its marks.

The problem is the marks themselves. They're too low. Mission: Impossible, the Bourne series, TV's 24 — they're all more gripping, and the last Mission: Impossible movie, Brad Bird's Ghost Protocol, was sensational. Branagh brings no style to Jack Ryan: Shadow Recruit, and no heart. For once that business word franchise seems all too apt.