Accessibility links
For Cheating Husbands, A Little Dose Of Revenge On Tuesday, France's president held an uncomfortable news conference, beginning with a question about his personal life. Rumor has it he's been cheating on the French first lady with a younger actress. In light of this affair, author Sarah Wendell recommends revisiting an old classic: The First Wives Club. 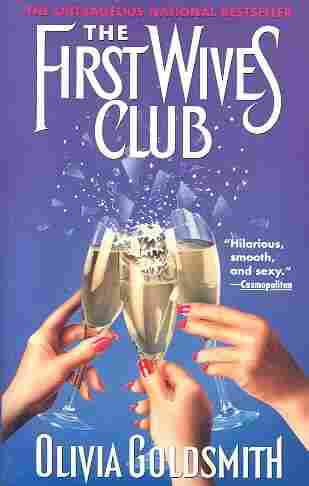 Sarah Wendell is the author of the book, Everything I Know about Love I Learned from Romance Novels. She is also the cofounder of the romance-reviewing website, smartbitchestrashybooks.com.

With French President Francois Hollande the focus of international headlines for cheating on his partner, Valerie Trierweiler — who is in the hospital due to the shock — a happy resolution to their problems seems unlikely.

It's hard not to sympathize with a woman who has been betrayed and must deal with the fallout while her relationship drama is part of the news cycle around the world. Whether the gossip is local or international, personal problems always seem even worse when everyone knows about them.

Which is why the most satisfying literary accompaniment to this story is one of the very best and most rigorous revenge stories in print: The First Wives Club by the late Olivia Goldsmith. Three women, each abandoned in humiliating fashion after their husbands become successful and trade them in for younger, slimmer women, come together after the suicide of Cynthia, another friend in their same predicament. They realize that they'd been hiding their pain from one another. As one of the women wonders, "Why was it that the deepest pain, the despair, was so shameful even good friends kept it secret?"

But for these ladies, it's impossible to keep their scandals or their pain a secret, which is why it's satisfying to see the First Wives decide to exact revenge so very publicly. If you've seen the movie version, which starred Goldie Hawn, Bette Midler, and Diane Keaton, expect a slightly different story in the book. It's sharper and more biting than the film, with bleak honesty sharpened into a knife-point deadly sense of humor.

Their revenge is not just served cold. It's Costco-sized. One ex is arrested in front of a billion dollar's worth of clients in his own gallery while his new wife cries loud and fickle tears. Another sees his priceless art collection sold by his ex-wife for $1 when he tells her to just take care of it and send him the profits. There are little scores and big destruction, depending on the crimes of the exes in question. The worst is reserved for Cynthia's former husband, as her suicide brought them together so they could bring him down. It's a fantastic scene of outsized retribution involving a Jaguar, and all of New York's high society.

This story doesn't exactly end with a kiss or a ring. But the happily ever after for the ladies in The First Wives Club is a real one: They get mad, they get even, and then they move on.