Accessibility links
5 Takeaways From The President's NSA Speech The president's speech Friday offered a revealing look into the nation's phone data collection program and the direction of the surveillance policy debate. But some of biggest controversies have been put off or pushed to Congress. 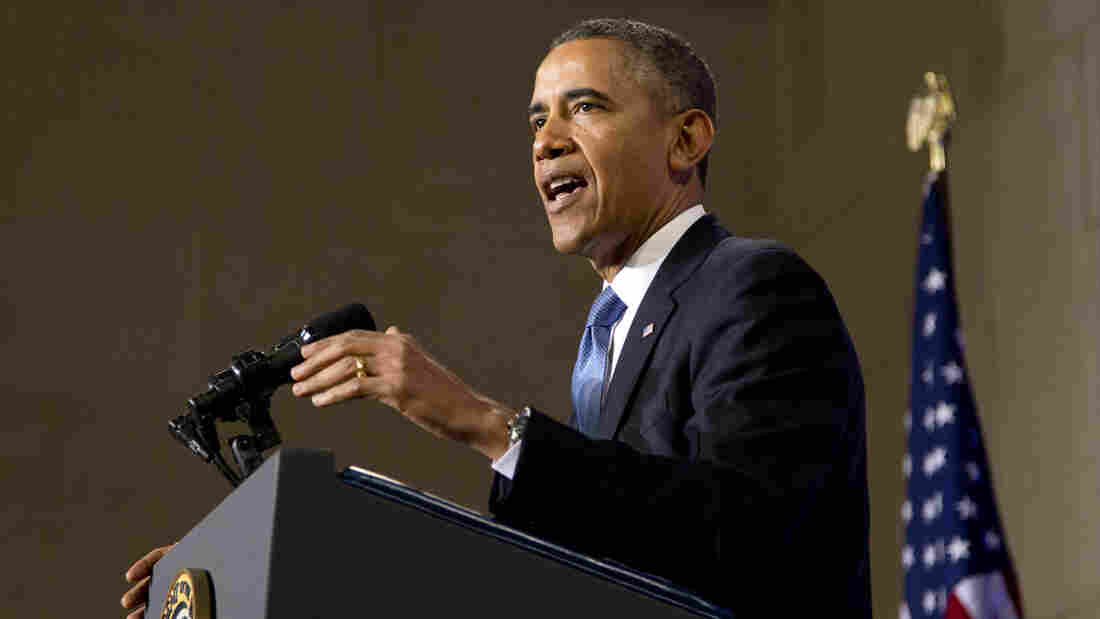 President Barack Obama talks about National Security Agency surveillance Jan. 17 at the Justice Department in Washington. Seeking to calm a furor over U.S. surveillance, the president called for ending the government's control of phone data from hundreds of millions of Americans and immediately ordered intelligence agencies to get a secretive court's permission before accessing the records. Carolyn Kaster/AP hide caption 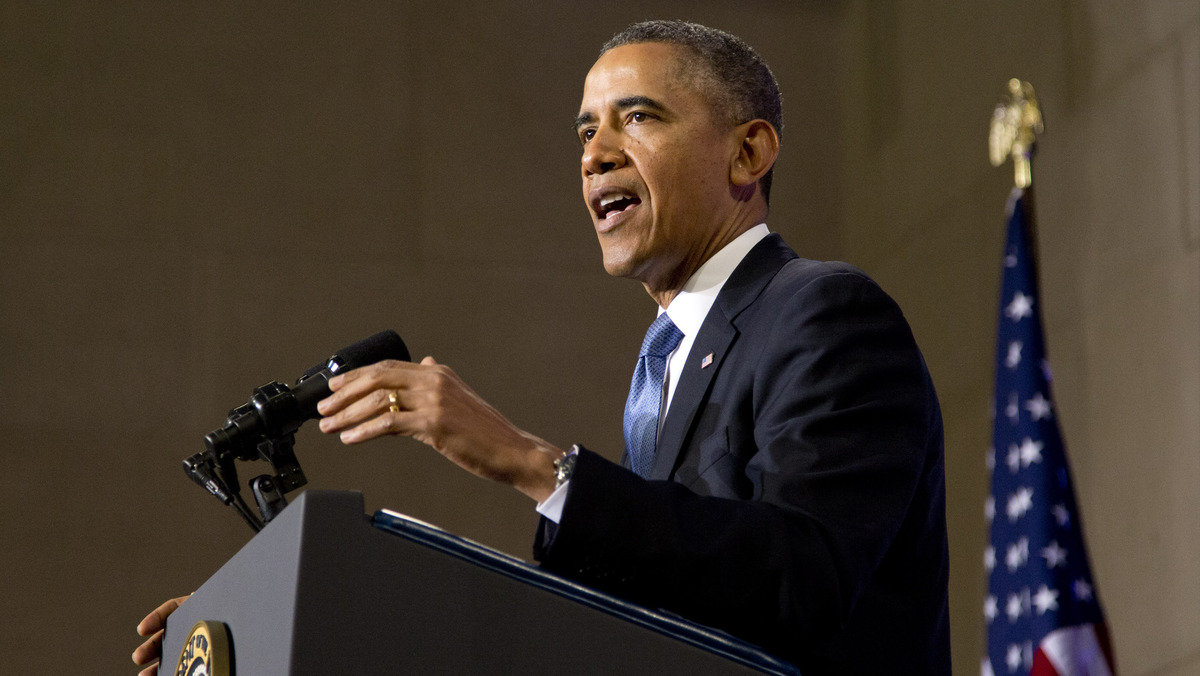 President Barack Obama talks about National Security Agency surveillance Jan. 17 at the Justice Department in Washington. Seeking to calm a furor over U.S. surveillance, the president called for ending the government's control of phone data from hundreds of millions of Americans and immediately ordered intelligence agencies to get a secretive court's permission before accessing the records.

What does it mean when lawmakers as different as Colorado Democratic Senator Mark Udall and New York Republican Rep. Peter King offer praise for the president's long-awaited speech on surveillance reforms?

Mostly that resolution to the biggest controversies after leaks by NSA contractor Edward Snowden has been put off — or pushed to working groups in the executive branch and the lawmakers themselves.

Still, the president's NSA reforms speech Friday offered a revealing look into the nation's phone data collection program and the direction of the surveillance policy debate.

Here are five takeaways from the president's speech:

President Obama left it to Attorney General Eric Holder and Director of National Intelligence James Clapper to decide who will store billions of records of American phone call metadata.

He asked the officials to figure out a solution before March 28, when the secret foreign intelligence surveillance court will need to do a regular renewal of the government's authority of that provision of the Patriot Act. But telecom companies don't want the job, a third-party consortium doesn't yet exist to hold the data, and the NSA really doesn't want to give it up. In the words of privacy advocate Julian Sanchez, a fellow at the Cato Institute, "the frustrating thing is the details are so up in the air we can't even really say yet whether this means an end to bulk collection."

Beyond that, the president asked the intelligence community to look over the next year for a technical solution that would allow targeted data collection, instead of the dragnet being performed now. But NSA chief Gen. Keith Alexander has testified the agency has no short term fix and would welcome help from the private sector. The Patriot Act expires in 2015 and the part that covers phone metadata, known as Section 215, will require congressional approval—which means the real battle could come next year.

The President unilaterally stopped surveillance on some foreign allies after the Snowden revelations and ordered the intelligence community to submit collection priorities for high-level review on an annual basis. He also extended some privacy protections to people internationally — not just Americans. And he ordered the attorney general and the director of national intelligence to develop new restrictions on the government's ability to retain, search and use information under section 702 of the Fisa Amendments Act it's collected on Americans who are communicating with targets overseas. But privacy advocates say the details, which are not yet apparent, will make all the difference here. Among the key questions: how long will that data be retained, how can it be searched, and in what kinds of cases?

Kevin Bankston of the New America Foundation's Open Technology Institute, said in an email to NPR that "the president's proposals... were disappointingly vague and fell far short of what his own handpicked review group had recommended. Although he charged the intelligence community with coming up with new unspecified restrictions on when collected data could be used or disseminated, he did not at all promise any change to the amount of data that is collected, nor did he endorse any of the 702 reform proposals currently in Congress."

The president has asked Congress to create an independent panel of advocates who might help judges on the foreign surveillance court in select cases that involve groundbreaking areas of law and technology.

Who's going to vet those advocates? And is imposing that layer on the courts constitutional under the separation of powers? Moreover, Judge John Bates, the former chief of the surveillance court, wrote Congress this week that bringing in those friends of the court must be done in a way that "maximizes assistance to the courts and minimizes disruption to their work." Bates went on to write that the advocates couldn't consult with targets of surveillance or go on fact finding missions for reasons of "operational security."

"An advocate therefore would be of little, if any assistance in evaluating the facts of particular cases which...is the heart of the FISC's consideration in the large majority of cases," he said.

For any of the changes President Obama made today to stick, and for most of the policy prescriptions he recommended, Congress will need to act.

"Executive branch overreach in the name of national security did not start — and will not end — with this administration," said Rep. Jerrold Nadler, D-N.Y. "The balance of powers enumerated in the Constitution must be respected for generations to come, regardless of who occupies the White House."

Whether Democrats, libertarians and Tea Party Republicans can work together long enough to form a stable coalition that survives House and Senate review is an open question.

Allies of the intelligence community on Capitol Hill, including Senate Intelligence Committee Chairwoman Dianne Feinstein, D-Calif., House Intel Chairman Mike Rogers, R-Mich., and King, the New York Republican, demonstrated a more unified front today at the Justice Department. They huddled for long moments in the Great Hall after the president's speech, chatting with administration lawyer Robert Litt, who's worked as the quarterback for the intelligence community's response to the Snowden leaks.

And then, there is the issue of Snowden himself. In an unusual move, the president went out of his way to mention the former NSA contractor who's been charged with violating the 1917 Espionage Act, closing the door on calls for clemency or lenient treatment.

"Our nation's defense depends in part on the fidelity of those entrusted with our nation's secrets," Obama said. "If any individual who objects to government policy can take it in their own hands to publicly disclose classified information, then we will never be able to keep our people safe, or conduct foreign policy."

Snowden is in Russia on a grant of temporary asylum – and the clock is ticking on his one-year sanctuary from Vladimir Putin. Will Russian leaders evict him, shepherd him to yet another country, or try to send him back to the U.S.?