Accessibility links
Under Government Pressure, Mexican Vigilantes Vow To Fight On Federal forces are backing away from a plan to disarm the civilian militias that are defending their communities from ruthless drug traffickers. In the western state of Michoacan, it's unclear how long the fragile peace will last. 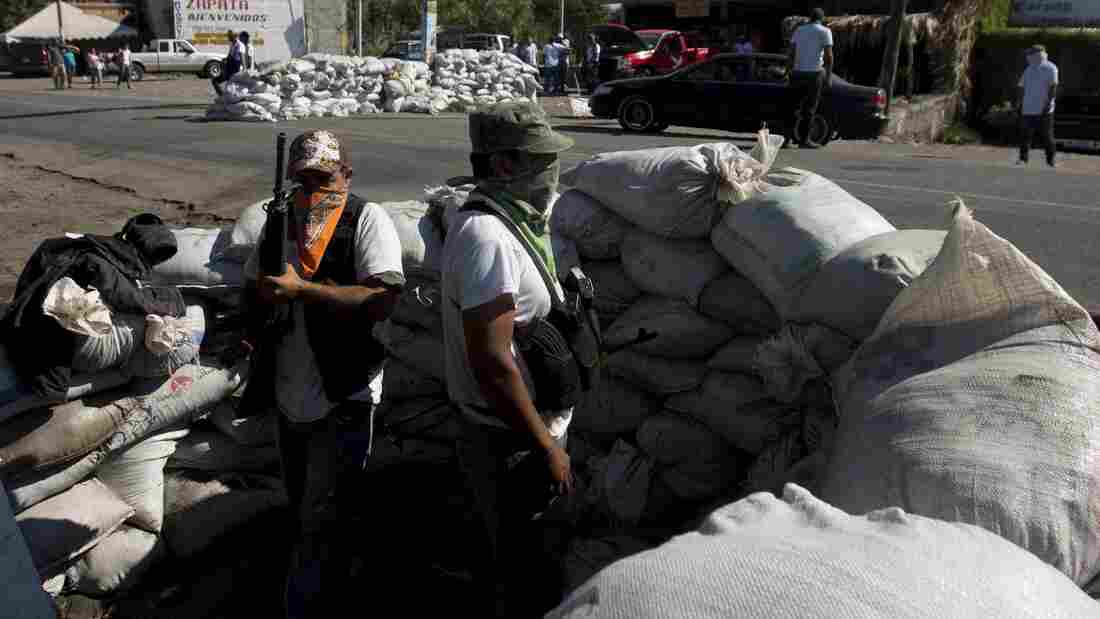 Civilian militia members stand guard in the town of Nueva Italia on Monday. Since a government crackdown last weekend, militia groups say they have laid down their weapons against drug traffickers. Eduardo Verdugo/AP hide caption

After a week of fighting between civilian militias, drug traffickers and federal forces, there is a tense calm in the western Mexico state of Michoacan.

It's been the site of clashes between civilian militias defending themselves from ruthless drug traffickers, and federal forces trying to regain control.

For now, businesses are slowly reopening, school will restart on Monday, and the militias who took up arms have put down their weapons. It's unclear how long this fragile peace will last.

About 20 men stand guard at the main intersection on the road into the Michoacan town of Nueva Italia. Some are young, some old. A few wear T-shirts identifying them as the civilian militia — or self-defense patrols, as they call themselves.

There are no arms in sight, except for a pistol one young man has strapped to his belt.

All say they've had run-ins with the Knights Templar. That's the drug cartel that rules this region, which is known for its limes, avocados and tempestuous residents. The area also has a reputation for rebellion.

"That's why we took up arms," says Gutierrez, 19. "The local and state police did nothing to protect us."

He should know. Gutierrez says last summer he was at a neighbor's house when he heard Knights Templar cartel members screech up their dirt road in several cars.

He took off running. He says the gang took his parents, his grandparents and three cousins. They haven't been heard from since.

Another man at the checkpoint says he was held with his two brothers until his family paid a ransom. And nearly everyone talks about having to pay quotas, or being forced to sell their crops to the drug cartel at below-market prices.

The militia men have been patrolling their towns and inspecting cars at checkpoints like this one for nearly a year. All that time, federal police did little to stop them, and at times seemed to encourage the movement.

But that tacit approval appeared to end last weekend, when the number of the militias mushroomed and surrounded Apatzingan, a town of 100,000 people and the Knights Templar's stronghold. A major battle between the militias and the cartel seemed imminent.

The federal government sent in thousands of police and troops to disarm the civilian patrols. A deadly confrontation ensued. Federal soldiers fired into a crowd of civilian militia supporters, killing two.

'Terrorizing Us For More Than A Decade'

Militia leader Estanislao Beltran says the government should have gone after the real criminals, the Knights Templar, and not those defending themselves. He vehemently denies rumors that he takes funds from a rival group.

"The cartels have been terrorizing us for more than a decade," Beltran says. "Why would we side with any of them?"

In fact, the Knights Templar is just the latest group to control the meth and marijuana trade here. A break-off of the former Familia Michoacan cartel, the Knights Templar members are known for their quasi-religious preachings and ruthless violence, which quickly expanded beyond drug trafficking and into extortion and kidnapping.

Beltran says for now, the militia is willing to store their weapons.

"We would like to give the federal police the chance to show us they can control this problem," he says. But he adds, short of arresting the cartel leaders and their lieutenants, the group will not retreat.

Since the killing of the two civilians, the federal forces have backed away from their plan to disarm the militias.

The escalating violence in Michoacan has become the biggest security problem for President Enrique Pena Nieto, who has tried to downplay the drug war since coming into office 13 months ago.

This week, the government appointed a trusted Pena Nieto ally to coordinate security and development in Michoacan.

But for now, dozens of checkpoints in the region remain manned by the civilian militias. Heavily armed federal police watch nearby in pickup trucks. The militia no longer carry their rifles or assault weapons in plain sight, but they say their arms are close by if the Knights Templar come back.

Gutierrez, whose whole family is missing, says he's in the fight for the long run.

"We have to stop the Knights Templar for the kids that still live here," he says. "Hopefully we can bring back the peace and stop the injustice ... if not, this insanity will never end."