Accessibility links
'That's Me': A Transgender Punk On Life In Transition "I don't have to think," Laura Jane Grace says of performing as a woman: "I can just be and exist." She speaks with NPR's Rachel Martin about how her recent transition is playing out in the music. 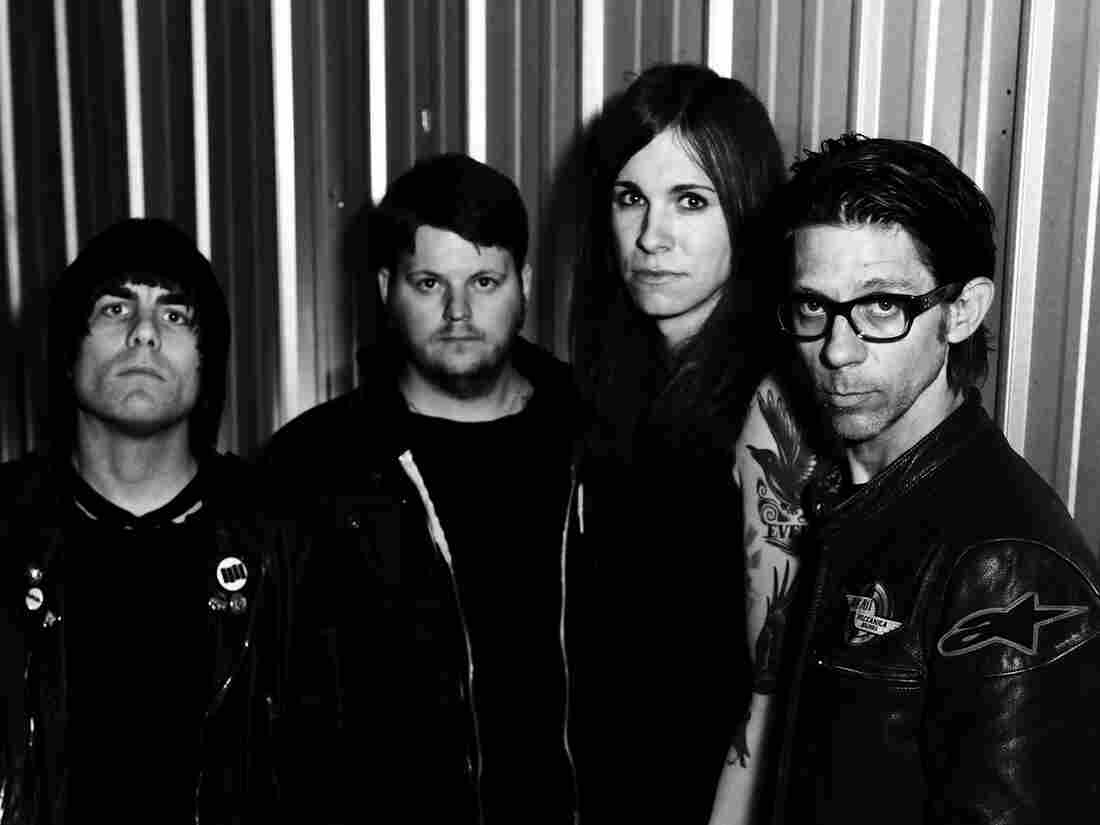 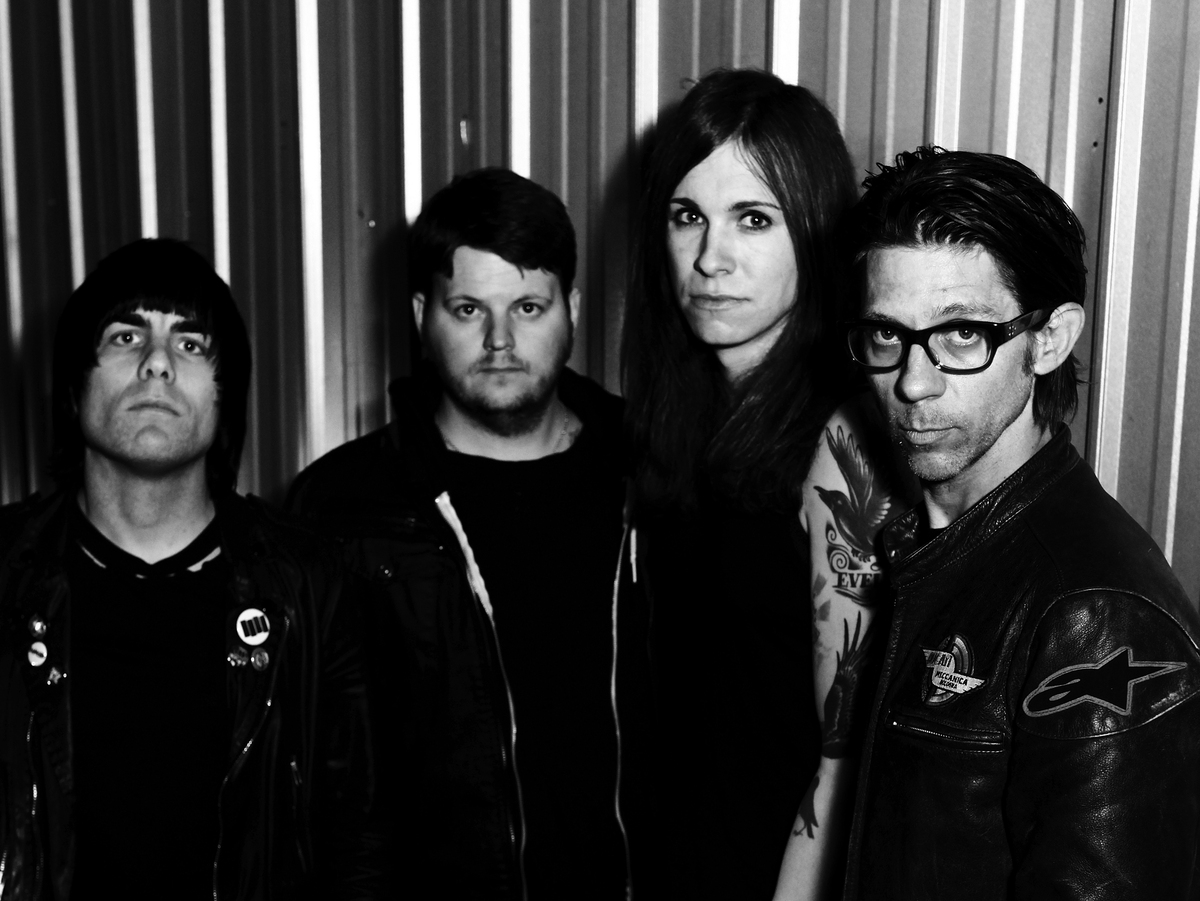 The new album from Florida punks Against Me! is titled Transgender Dysphoria Blues — and that's not just a metaphor. It's the first album the band has released since lead singer Laura Jane Grace went public with her transition from a man to a woman. Now, instead of hinting at feelings of gender dysphoria in her lyrics, they're all right there, front and center, beginning with her barked opening lines: "Your tells are so obvious: shoulders too broad for a girl."

Against Me! has been around more than 15 years, building significant success on the back of those growling, assertive vocals — and as Grace told Weekend Edition Sunday host Rachel Martin, her voice is one of many things about the band that haven't changed. Grace and guitarist James Bowman spoke with Martin this week from a tour stop in South Carolina, touching on the vital support of their fans, the lack of transgender representation in the media, and why it's so tough to be a songwriter with a secret. Hear the radio version at the audio link, and read more of their conversation below.

RACHEL MARTIN: Laura, I'd like to start with you. This has been a long time coming. What does it mean for you to be able to make your first album as a woman?

LAURA JANE GRACE: It's freeing. It's liberating. There were definitely songs in the past that were me dealing with living this gender dysphoria, and sometimes they were really direct and no one picked up on it — but oftentimes, they were more veiled in metaphor. Feeling that what you're doing is being misinterpreted by most people, because it's not being presented in the proper context, was something that built to a breaking point for me.

MARTIN: You mention that you had referenced your gender dysphoria on previous albums. You were conscious you were doing that. Were you looking for someone to recognize it and to open a door where you could be more public about it?

A good example of that would be a song off of our fourth full-length album, New Wave. The last song on the record is a song called "The Ocean," and there's a line in the song: "If I could have chosen, I would have been born a woman." That was a song that came to me in one sitting — all the lyrics, all the music, front to back — and as a songwriter, you really wait for those moments of just pure inspiration, where it hits you and you don't have to work for it. I had no intent of sitting down and writing a song where I said the things that I said, but it came out. I remember being in the studio and starting to sing the song, going through it once and stopping and asking everyone, "Hey, is that a weird line? Should I change that line?" Just expecting for people to be like, "What do you mean by that line?" — whether that's the band, or producer, or even in interviews with journalists after the album came out. But, nothing. No one ever said anything.

MARTIN: James, what about that? You never thought twice about lyrics like this?

MARTIN: So what was it like for you and the rest of the band when Laura first sat down and came clean about where she was and what she wanted in her transition?

BOWMAN: I remember I wasn't surprised or shocked; I guess maybe I was expecting it somehow. But I remember the drive back — we were at this studio we had in St. Augustine, Fla. at the time, and the car ride was really quiet. And I was just thinking, and it was actually all the moments of, like, little snippets of lyrics flashing back. I was like, "Ah! It all kind of makes sense now."

MARTIN: Laura, these feelings that you were in the wrong body started a long time ago, when you were very young, right?

GRACE: My earliest memories are of dysphoria.

MARTIN: How did it take shape for you then?

GRACE: I vividly remember — I was probably about four years old, lived in Texas at the time — and there was a live Madonna concert being broadcast on TV. And I just remember feeling self-recognition: "That's me," you know? "That's me, and that's what I want to do." And, at the same time, realizing that there was a misalignment between recognizing yourself in someone and realizing, "But I'm a little boy." I don't think I ever heard the word "transgender" until I was way in my teens; the concept had never even dawned on me. But immediately, when you have those feelings, you feel shame. I'm not sure if I was taught that, necessarily, but it was an immediate thing: wanting to play with Barbie dolls when you're young, and knowing that your dad wants you to play with G.I. Joes. It was something that was immediately internalized.

MARTIN: So this goes on for years, you pushing down these feelings and setting them aside. Ultimately, you met the woman who would become your wife, Heather, and you had a daughter. How has your transition affected your family life?

GRACE: Well, it's something that's in transition, too. And it's scary; I'm not gonna lie. It's really frightening feeling like there's so much uncertainty, and that you've made a decision — even though it wasn't really a decision, because it was based on, "Either I'm going to kill myself, or I need to address this." I don't have a map going forward. I don't have all the answers. I know this is something that is going to potentially destroy everything in my life in a lot of ways, and cause a lot of uncertainty for things I don't want to change, things that I'm happy with.

MARTIN: You revealed your gender dysphoria in a 2012 Rolling Stone interview and started taking hormone therapy, I understand, a few months after that. Initially, you and your wife had decided to stay together. Is that something that is still in transition?

MARTIN: And your daughter? I understand there's a song on this album about her.

GRACE: There is — "Two Coffins" is a song I wrote for my daughter.

MARTIN: How old is she?

MARTIN: How's your relationship with her?

GRACE: She's fantastic, you know? She's the light of my life.

MARTIN: You've spoken before about how lonely it was in the beginning, when you made this realization that you wanted and needed to be a woman. You didn't have a huge support system, and you reached out to a fan of your band who you knew shared a similar experience.

GRACE: That's correct — a friend of mine named January Hunt, who I'd recognized coming to shows throughout the years of the band. We played a show once in Buffalo, N.Y., and for the first time ever, we played a song off our third record called "Searching for a Former Clarity" — again, the last song on the record, and again, a song in which I kind of outed myself. It had the line, "Confessing childhood secrets of dressing in up in women's clothes / Compulsions you never knew the reasons to." We played the song, and I thought it just bombed; there was no reaction from the audience. But after the show she came up and was just like, "That song was great."

Flash forward a couple years later, we were going through New York and we played a show at the Mercury Lounge. She came out, and I saw her, and I just immediately knew, "Oh — you're transitioning. You're someone who has been coming out to my shows for years, someone who, I assume, respects my band, and the band has given you some kind of strength or joy just from listening to the music or whatever — and you're doing something that I can't seem to find the strength to do right now." It was completely eye-opening to me, and really an inspiring moment. When I made the decision to come out and was about to do the Rolling Stone interview, I didn't have a single person in my life who had gone through anything like that, so she was one of the first people I came out to.

MARTIN: I imagine a lot of the support you get now comes from your band; you and James have been friends for a long time. Has any of this changed the way you make music as a band, at all?

BOWMAN: The only thing that changed, honestly, was pronouns. That's it.

I'm willing to talk about this stuff and do interviews, and I accept the fact that a lot of people have questions about it right now because it is something new. But I know that's not lasting, and I know that it's not really what's important.

MARTIN: Your voice didn't change at all with hormone therapy, Laura?

MARTIN: ... a question everyone asks?

GRACE: Well, it's just a misconception. Hormone replacement therapy does not change or affect your voice. And I have no problem with my voice: I really like my singing voice, I don't feel any dysphoria with my talking voice. Right now, you can probably hear I'm really scratchy. We've been on tour and I've screamed my head off every night.

MARTIN: What about your persona? A lot of being the frontperson of a band is about you, this personality, and what you project. That has changed.

GRACE: But that's where the disconnect was happening for me: being on stage and being featured in magazines where you're essentially competing with other male singers. Rock 'n' roll, or punk rock, it's a boy's club in a lot of ways, and you're out there with your photo side-by-side with these other people that you're supposed to measure up to. And I didn't. I wasn't one of those dudes. So it felt like more and more pressure to be someone I wasn't.

MARTIN: And performing is better for you now?

GRACE: Of course. It's what it was when I started out, as far as being a joyful experience and what I live for. I don't have to think; I can just be and exist.

MARTIN: So what happens now? You've put in a lot of energy and emotion and dug into some dark places to produce this album that is so deeply personal. Is it a kind of catharsis? Do you move on and make music that doesn't have to do with transgender dysphoria, or will this always kind of permeate your work in some way?

GRACE: I've always been the type of writer that, with each record, whatever I'm digging at, once I've gone through that, that is cathartic for me. I don't like to rehash stuff, so it's not like I want every record the band makes to be transgender this or transgender that. I do think it's important to be representative, that my voice is a transgender voice, because that perspective is not something that is common in the media. I'm willing to talk about this stuff and do interviews, and I accept the fact that a lot of people have questions about it right now because it is something new. But I know that's not lasting, and I know that it's not really what's important. The key to being a great band that lasts is always going to be making sure you write really good songs and put on really good shows. That's all that really, actually matters.