Accessibility links
Mentally Ill Are Often Locked Up In Jails That Can't Help Over the past decade, thousands of mentally ill people have been funneling in and out of the nation's jails, landing in places that are ill-equipped to treat them. Illinois' Cook County Jail has some of the most innovative programs in the country, but staff say it's a far cry from actual treatment. 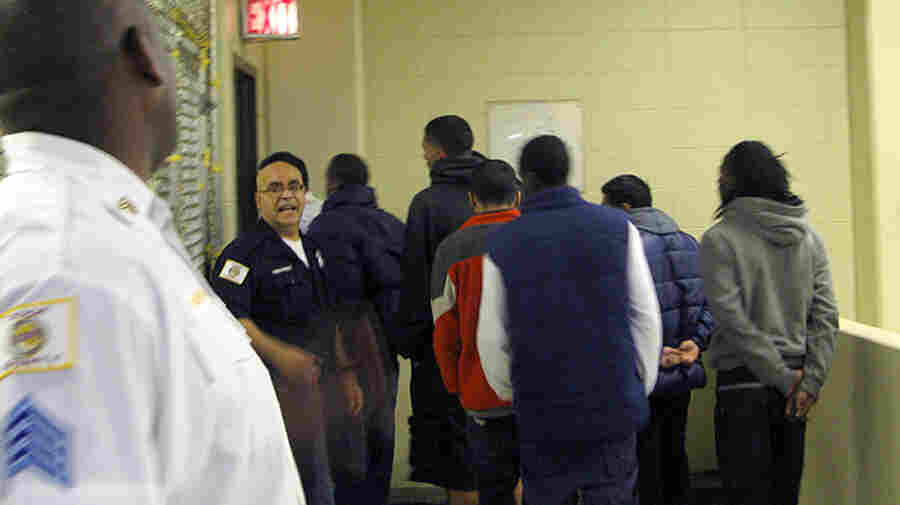 Cook County Jail inmates head off to bond court after being screened for mental illness. If they then don't get released, the jail will separate the mentally ill from the other inmates. Laura Sullivan/NPR hide caption 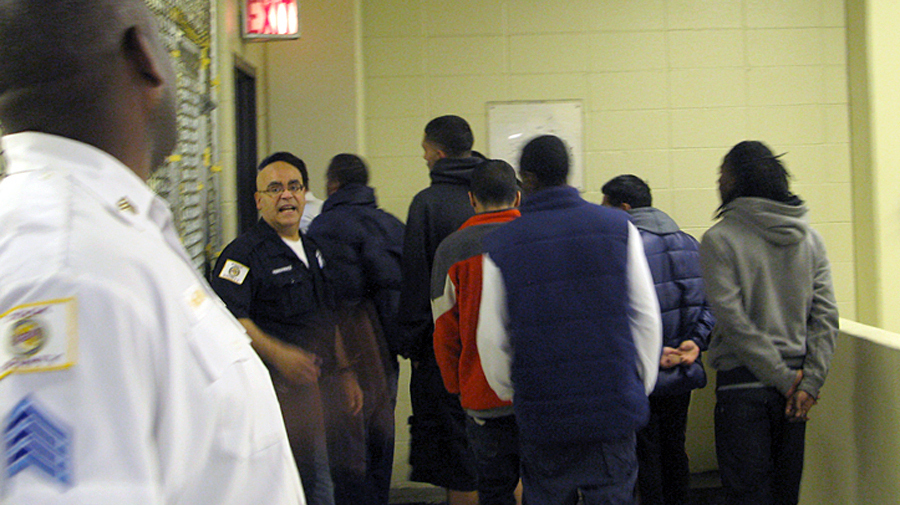 Cook County Jail inmates head off to bond court after being screened for mental illness. If they then don't get released, the jail will separate the mentally ill from the other inmates.

Cook County, Ill., Sheriff Tom Dart walks the halls of his jail every day. With 10,000 inmates, this place is a small city — except a third of the people here are mentally ill.

Dart has created some of the most innovative programs in the country to handle mentally ill inmates, hiring doctors and psychologists, and training staff. But if you ask anyone here, even this jail is barely managing.

"I can't conceive of anything more ridiculously stupid by government than to do what we're doing right now," Dart says.

Fifty years ago, states began shutting down asylums in favor of community mental health centers. It was a major policy shift in mental health, allowing patients to go home and live independently.

Over the past decade, though, states have cut billions from their mental health budgets, shuttering clinics across the country. The result is thousands of mentally ill people funneling in and out of the nation's jails. In many cases, it has sent the mentally ill right back where they started — locked up in facilities that are ill-equipped to help them.

You can see the problem every morning in the intake center in Cook County, where 250 new inmates, arrested overnight, are stuffed into bullpens.

Elli Petacque Montgomery is the deputy director of mental health policy for the sheriff's office. She and her staff screen all of the inmates for mental illness.

It's not the hostile, angry men at the front of the cages, bickering with jail staff and pushing each other for more elbow room that interest her. It's the men in the corners — men who come to jail and manage, despite the noise and commotion, to fall asleep.

"I'm kind of curious about this guy in the blue," says Montgomery, pointing to a man sitting quietly on a bench. "Now, is he dazed because he's on drugs or because the voices in his head are louder than what's happening around him?"

On this morning, one inmate after another has a problem. One man tells her he's going to kill himself because he thinks he's already dead. Another guy explains that the voices tell him to hurt people.

"To walk in and feel like every other person I'm interviewing [is] mentally ill on any given day, I can't wrap my brain around it," she says. "It's staggering what we're really dealing with." 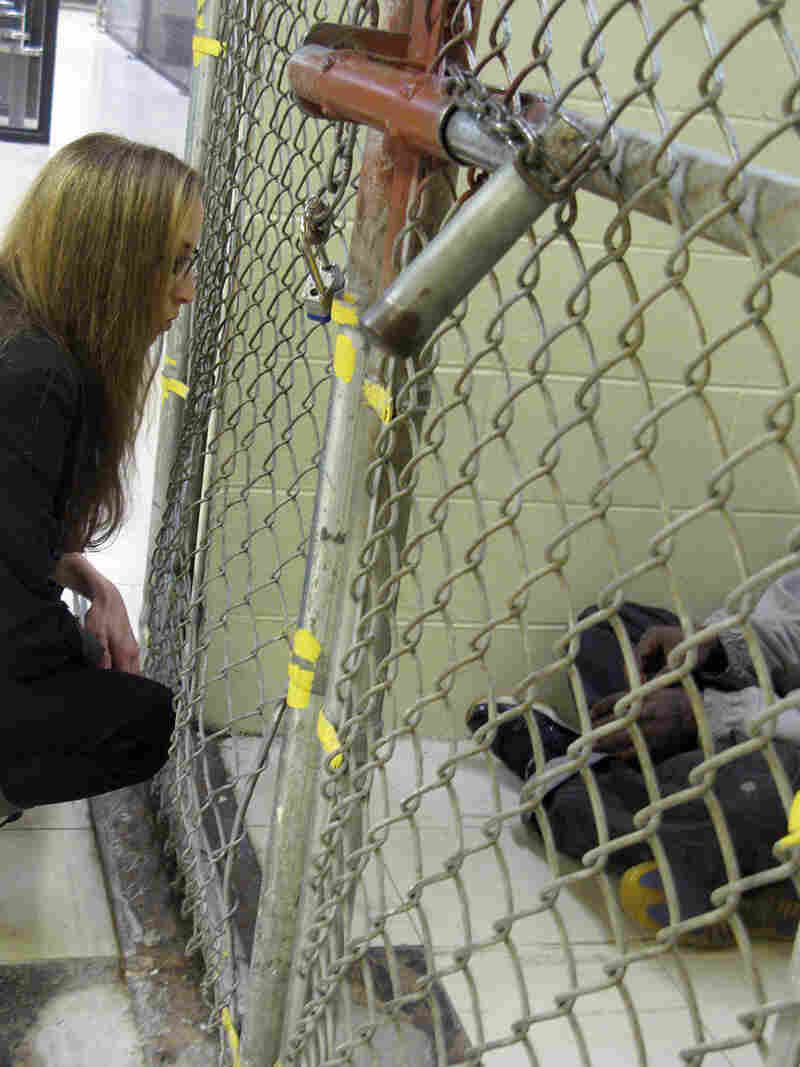 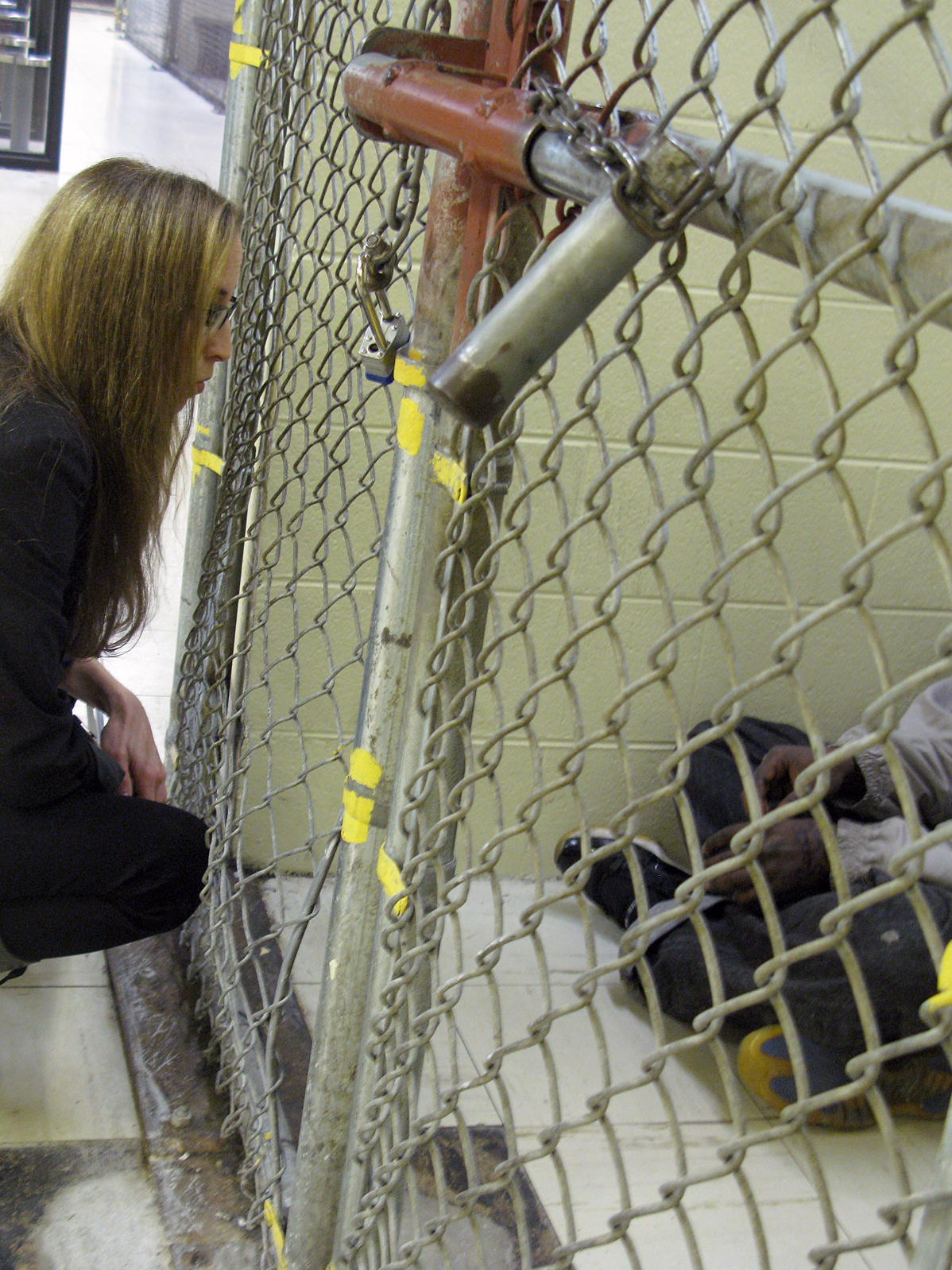 Most of these men are here on minor offenses. Police have picked them up for small crimes like acting out in front of restaurants, sleeping in abandoned buildings or possessing drugs. They're people with nowhere to go and nowhere to get medication. Some of them will stay for a few days; some for a few weeks. But statistically almost all of them will be back.

While these men are here, the jail's responsibility is to keep other inmates from hurting them, and them from hurting themselves. But jail staff say what really happens deep inside this jail is a far cry from actual treatment.

Inside the women's psych ward — a place rarely seen by the public — a long, sterile hallway with a row of green doors leads to a community area where 20 women are sitting in chairs. Some are rocking; some are pulling out their hair. Many are staring into space.

"You see people who are so profoundly ill that you understand that this is not the place for them," says Dr. Nneka Jones Tapia, head of mental health for the jail.

But here and throughout much of the country, there's nowhere else for them to go. City and state governments nationwide have cut funding for mental health services. In the face of budget shortfalls, Chicago officials closed six of the area's 12 mental health clinics in the past three years. Illinois officials closed three of the area's state hospitals. Private clinics are also struggling for funding.

Without medication or counseling, these inmates wind up in front of police. They're brought here to this ward, which resembles something from the past.

The jail's chief psychologist, Kenya Key, steps inside a small, dark room behind the community area. It has padded walls, a drain and a light — nothing else. It's called the quiet room.

"It's never used as punishment," Key explains. "The purpose of it is to decrease stimulation."

There's nothing to write with in this room, but the walls are covered in writing — slurs written with blood from fingertips or scratched into the walls with fingernails.

"The majority of the patients who are put here are in a state of very high agitation and escalation," Key says. "While we do have those patients that will ask, 'Can I go to the quiet room?' [with] the majority of patients, it's a forced intervention to help the patient de-escalate."

I can't conceive of anything more ridiculously stupid by government than to do what we're doing right now.

In the men's psych ward down the hall, the scene is similar. Some men are locked into rooms where they pace back and forth for hours in smocks. One man is wearing just a blanket. One man had been tied down in an empty room during the night with leather straps.

"Full leather restraints are used when a patient does not respond to any other intervention," Key says, "which means they are literally restrained to the bed."

Officials acknowledge that what's happening in these wards is reminiscent of the mental asylums of the last century. But they say the only other option is to lock the mentally ill in solitary confinement for weeks on end.

This is, after all, a jail. And this is one of the few in the country with doctors and nurses, psychologists and correctional officers trained in how to handle psychotic episodes. And there are rules: Inmates can only be forcibly medicated with a doctor's orders. Leather restraints and padded rooms have time limits.

Still, Sheriff Dart says he's confused by the compliments he hears from other jail administrators.

"On the one hand, they're speaking so highly about what you're doing," he says, "but it's depressing as hell when they tell you you're the leader. I feel as if we're doing the bare minimum, and we're the leaders? No, this is not good."

The confusion about what is supposed to be happening in this jail is apparent when correctional officers talk. They often switch between calling the men inmates and patients in the same sentence.

'I Don't Think They Know'

Once inmates are willing to eat, shower, dress and sit calmly, they move from the psych ward to Division 2, just across the road.

In one room of that facility, a group of inmates is standing by the television while 40 or so others mill about a row of bunks. Three of them say they came to the county jail to get back on their medication after their local clinic closed.

"Sometimes I would even commit a crime just to make sure I would get my meds," says inmate Joseph DeRiggi. "Here, there's a little more understanding because they know us: 'OK, DeRiggi, we know what you're on. You're good.' That's just the way it is." 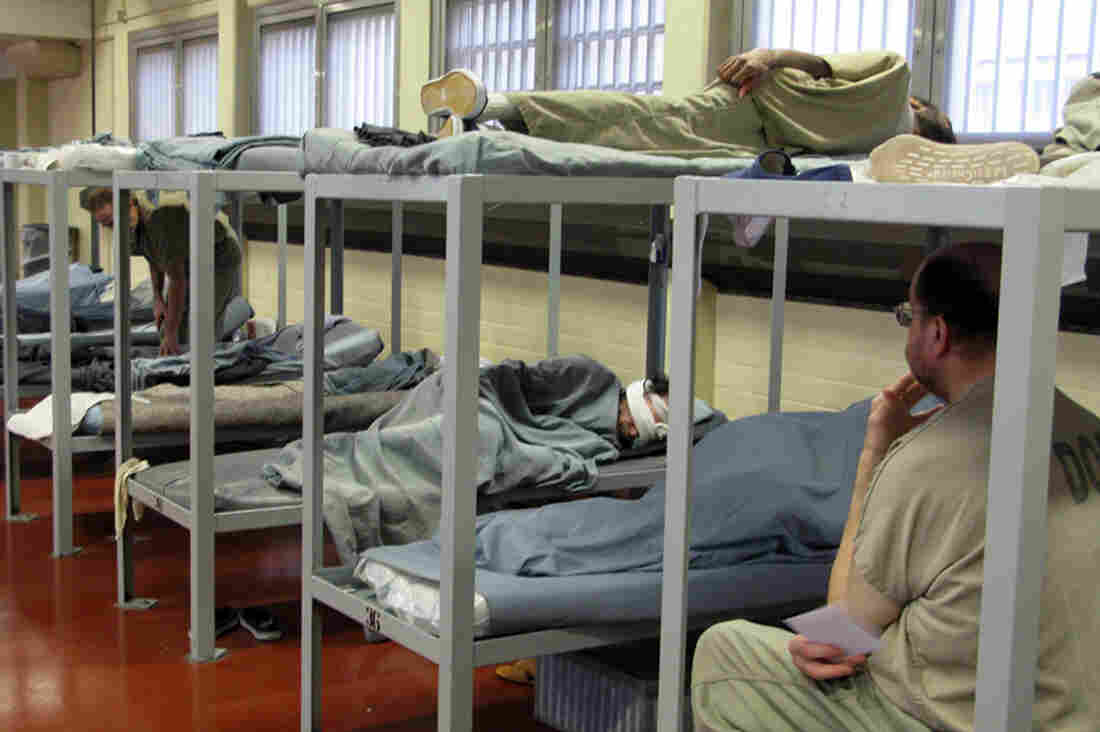 Mentally ill inmates who are able to shower, eat, sit quietly and otherwise care for themselves live in the jail's Division 2. A psychologist is stationed right outside the room, and officers are specially trained to deal with psychotic episodes. Laura Sullivan/NPR hide caption 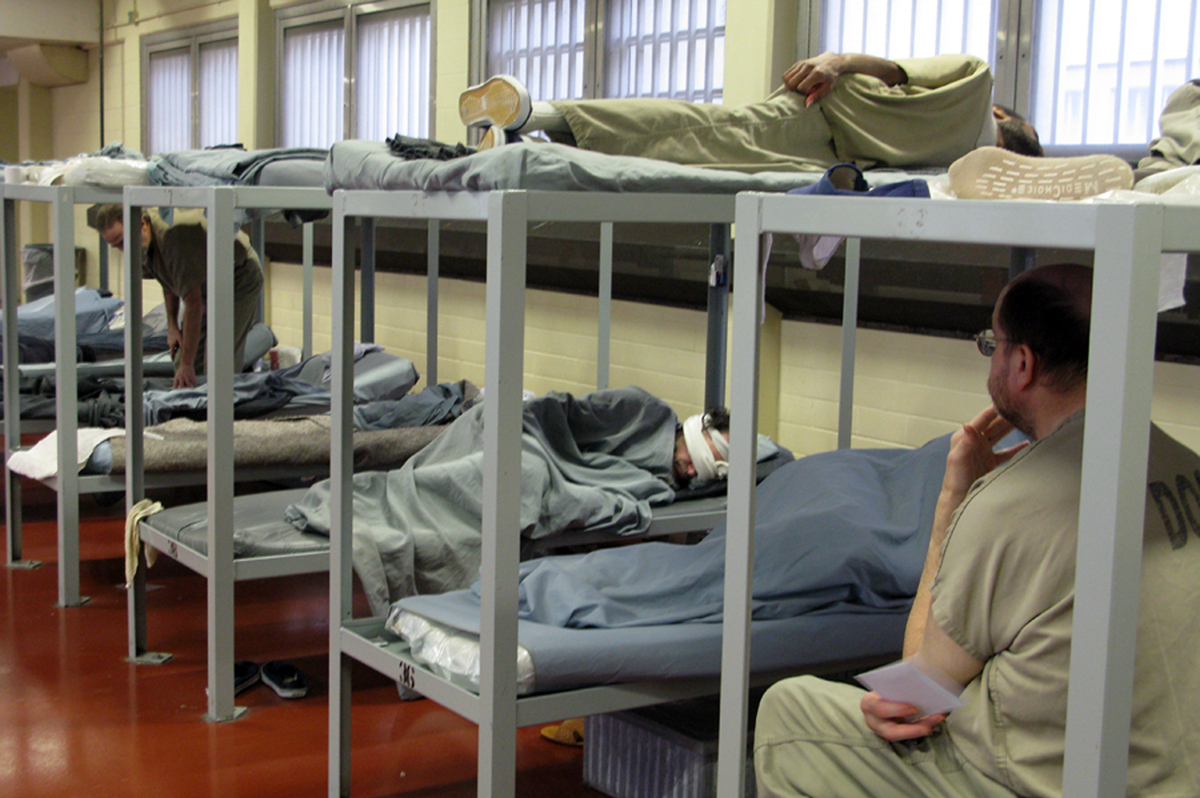 Mentally ill inmates who are able to shower, eat, sit quietly and otherwise care for themselves live in the jail's Division 2. A psychologist is stationed right outside the room, and officers are specially trained to deal with psychotic episodes.

But jail is an expensive place to get medication. It costs almost $200 a night to house a mentally ill person here; health clinics cost a fraction of that.

Plus, their cases clog the courts with largely minor offenses. That lengthens jail time for everyone. The average stay is now eight days longer than it was a few years ago. Adding eight days costs county taxpayers $10 million more every year.

As Dart makes his way through Division 2, he pauses to say hello to many of the inmates he recognizes. They cycle in and out. Dart stops at the bunks. His frustration is palpable.

"Here you have a population clearly identified as mentally ill, and you're releasing them to the street with nothing," he says. "This isn't left or right, conservative or liberal talking. What do you think is going to happen?"

Dart is a former prosecutor. He wants criminals punished. But he says he had no idea when he took the job of sheriff that he would also become the state's mental health provider.

While he's talking, a man in the back of the room starts walking in circles. He's saying he's God, and that he's going to make everyone disappear. Now the other mentally ill inmates around him are getting agitated.

Three officers with mental health training slowly surround him. They don't say anything; they just nod their heads, agreeing with him. On cue, the officers start walking, and the inmate instinctively starts walking with them. He doesn't know it, but he's headed back to the psych ward.

Dart barely pauses. He sees it every day.

He says he understands that money for community health centers is tight. But he says doing it this way is costing more.

"Clearly, our society had determined that the state-run mental hospitals were abhorrent, that, my God, our society cannot tolerate this, we're much more advanced than that," Dart says. "I just find the irony so thick that that same society finds it OK to put the same people in jails and prisons."

But then he shakes his head and changes his mind.