Accessibility links
U.S. Olympic Skier Finds Team Spirit, Minus The Team Three-time Olympic skier Kris Freeman has had a successful career filled with challenges; first and foremost managing diabetes while becoming an elite competitor in a physically taxing sport. But this past year, Freeman encountered another obstacle when his relationship with the national ski team abruptly ended. 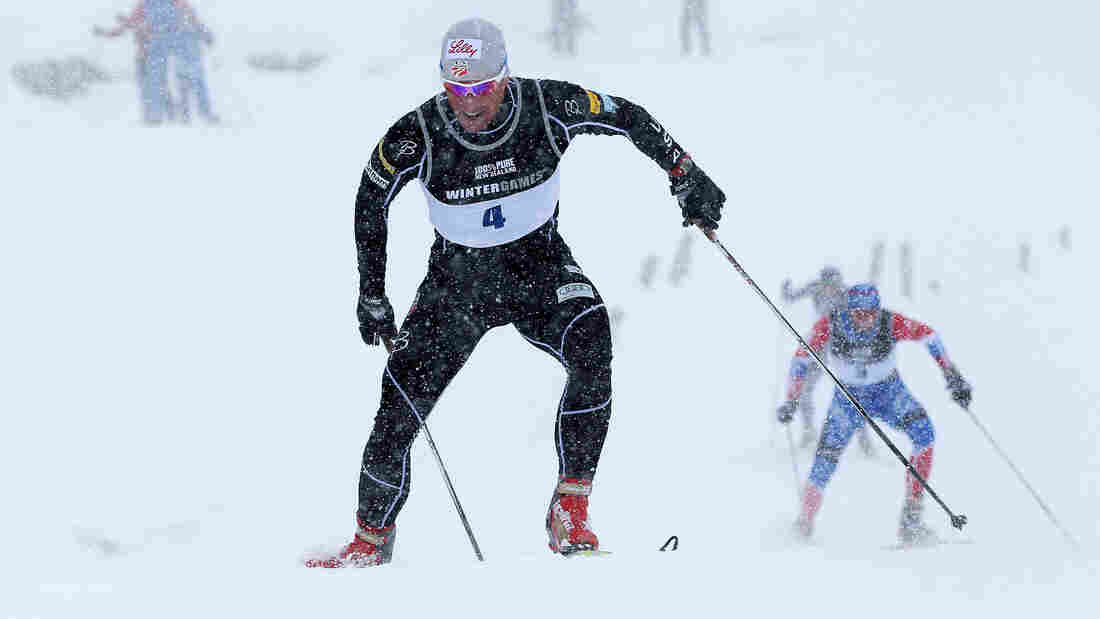 Kris Freeman, skiiing here for the U.S. team in 2011, during the Winter Games NZ, was cut from the U.S. Ski team before the upcoming Sochi Olympic Games. Freeman has had to train without their support and still hopes to qualify to compete in Russia. Hannah Johnston/Getty Images hide caption 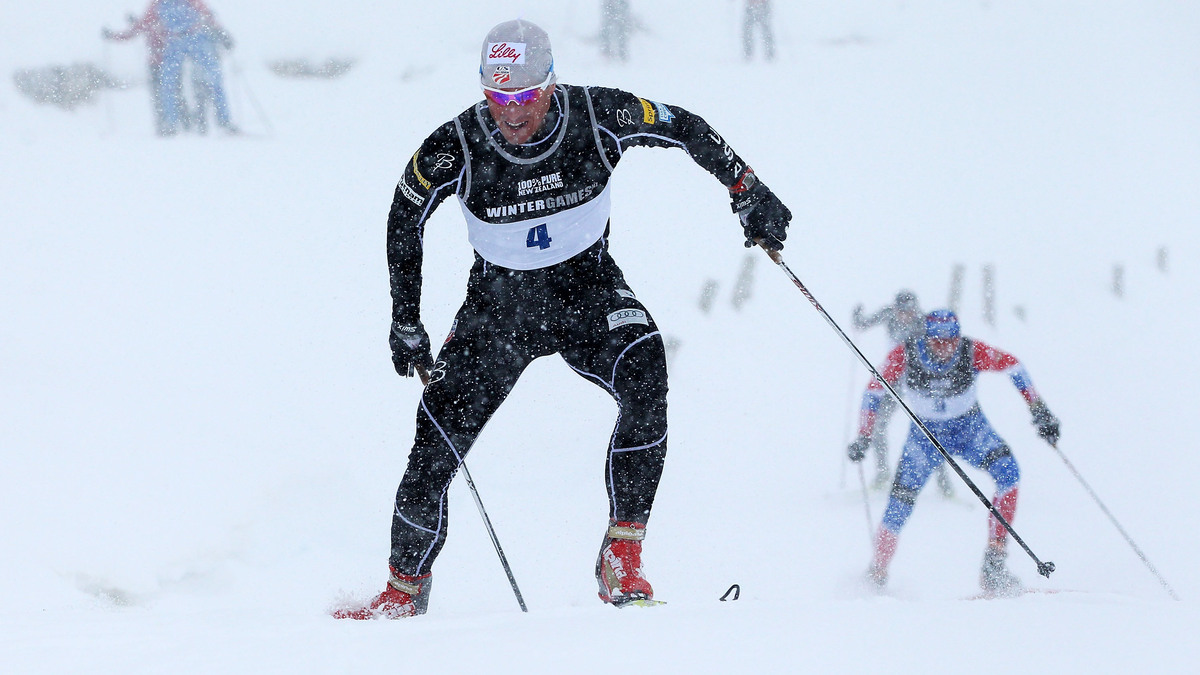 Kris Freeman, skiiing here for the U.S. team in 2011, during the Winter Games NZ, was cut from the U.S. Ski team before the upcoming Sochi Olympic Games. Freeman has had to train without their support and still hopes to qualify to compete in Russia.

The U.S. Olympic team is taking shape in the run-up to next month's Winter Games in Russia. This week, the Olympic cross-country ski team names the athletes who'll be going to Sochi, and veteran Kris Freeman is vying for another spot.

The 33-year-old Freeman already has been to three Olympic Games, and he's considered the country's best long distance racer over the past decade.

All that despite the fact that he has diabetes.

Freeman has had a successful career filled with challenges; first and foremost managing his disease while becoming an elite competitor in one of the most physically taxing sports there is. But this past year, Freeman encountered a new obstacle when his long relationship with the national ski team abruptly ended.

It's been that way since 2000. That's when Freeman was diagnosed with Type 1 diabetes. It's a condition where the body doesn't make the insulin needed to convert sugar from food into energy. In a 2006 NPR interview, Freeman demonstrated how he pricked his finger, multiple times each day, to measure the sugar in his bloodstream and make sure the amount wasn't too high or low.

Since then, the technology has advanced. Freeman now uses a continuous glucose monitor; he describes it as a little receiver he implants in subcutaneous fat that gives a blood sugar level reading every five minutes. He also uses an insulin pump and says it has its advantages.

Sibling Snowboarders Hope To Reach Olympics At The Same Time

U.S. Biathlete Gives Up Olympic Spot To Her Twin Sister

Russia Aims To Implement The Tightest Security In Olympic History

"I don't need to take injections when I need insulin," he says, adding he has a remote device and he can program it to give much more precise amounts of insulin.

The improved technology allows him to do a good job managing his "sugar state" as he calls it. At least most of the time.s

Freeman describes a harrowing experience at the last Olympic Games, in Vancouver in 2010. Before the 30 kilometer pursuit, he says he made a rare error in the pre-race prepping of his blood sugar level. It was too low, and according to Freeman: "I actually had to stop for about a minute and consume more glucose in order to continue."

In fact, he collapsed.

"I did fall over," Freeman acknowledges, chuckling, "that would be another way to say 'I stopped.'"

That's vintage Kris Freeman. He's a stoic from New Hampshire, who tries to keep his attitude as level as his blood sugar.

But that even keel demeanor was seriously rocked last spring. That's when the U.S. Ski team cut him.

Freeman says he got a call from a U.S. Ski team official who broke the bad news.

"They said my trajectory wasn't what they were looking for," Freeman says. "[They said] that I had been skiing at kind of a plateaued level. I couldn't really argue with that except that I thought my plateau was pretty high."

It was, judging by Freeman's domestic results. Last April, he won the latest of his 16 national titles. But that wasn't the issue.

The U.S. Ski team declined an interview request, but a spokesman did say the decision was made because Freeman didn't meet the criteria for team selection two years in a row. According to the spokesman, the criteria are based on international results, including a World Cup overall ranking in the top 50.

Freeman says he was surprised and disappointed and that yes, anger crept in as well.

"As Olympians, you live your life in four-year blocks," he says. "After being with the team for three years in preparation for Sochi, then being cut on the actual Olympic year, [it's] pretty unprecedented."

The U.S. Ski team spokesman says the team "has a pretty long history of carrying guys who are off criteria. But [Freeman] was so far off."

It's well-chronicled that Olympic sport in this country is not as well funded as in other parts of the world. The U.S. Ski team felt its limited finances would be better spent on athletes who'd posted better results and who had, in Freeman's words, a better "trajectory."

The U.S. Ski team decision, Freeman says, cost him tens of thousands of dollars of support.

"When you go to the World Cup and you're on the U.S. Ski team they'll pay for your [ski] waxing support. They'll kick in and pay for part of your travel and just help with little things," he says. And you lose all that. You lose the funding for going to training camps, and thus you lose the opportunities to go head-to-head with the best skiers in the country."

Health insurance was a big loss for Freeman in particular.

"I've used the U.S. Olympic Committee health insurance since 2000, when I was diagnosed with diabetes," he says. "And I use it more than just about any other person I know on this team.

"There was a lot of stress and a little bit of a steep learning curve this last year trying to figure out how I was going to pay for certain things and what I was going to do for health insurance once my COBRA ran out," Freeman says.

Personal saving and sponsorships, including a long standing one with the drug company Eli Lilly, helped Freeman make up the deficit. He also joined a skiing club – Maine Winter sports center. Freeman says the club helped him with skis and food and lodging at this month's U.S. Nationals in Utah.

And then a couple of months ago, more help arrived.

"This is a guy that has put himself on the line for the United States year after year," Sununu says. "And to be dumped like that didn't seem right."

So in Sununu's words, "we kind of took action." He offered Freeman a job at the resort, which Freeman says has been his home ski area since he was six years old. Freeman signed on to teach racing clinics, which he did this past weekend, in exchange for a small stipend and most importantly, for health coverage.

"It meant a lot to me," Freeman says.

Freeman finished third in two races at this month's national championships. He says those results should help him make the U.S. Olympic team this week.

If he is, he'll represent the U.S. even though he won't be a member of the U.S. ski team. But Freeman insists his split from the team won't give him any extra competitive juice in Sochi.

Freeman's top Olympic result was a 5th place finish in a relay at the 2002 Salt Lake City games. He says he's been training better and smarter in the run-up to Sochi, and says he's ready – if chosen.

"I still believe my best Olympic results are in front of me."