Accessibility links
As NBC Prepares For A Late-Night Transition, Everyone Is On Message (So Far) Eric Deggans reports that NBC's approaching transition, which will see the second exit Jay Leno has made from the same late-night franchise, is on pace to elevate a former counterculture producer to the ultimate mainstream gig. 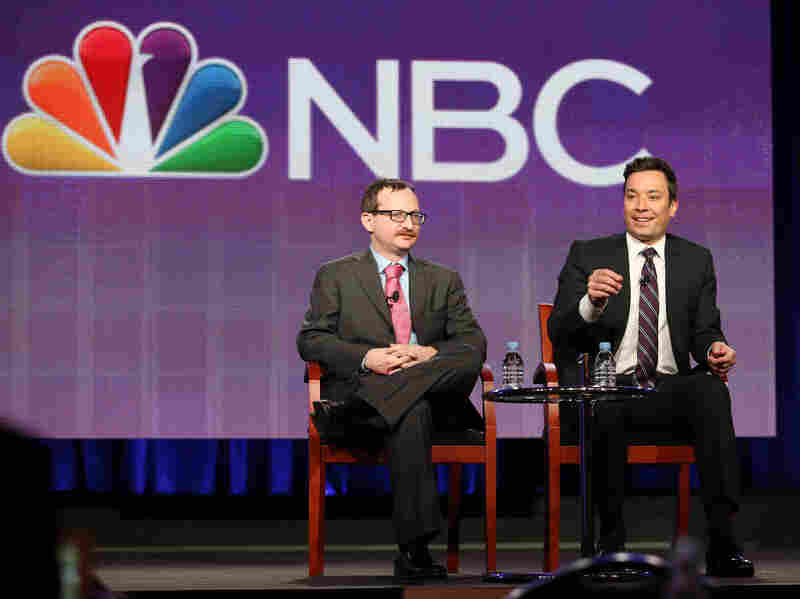 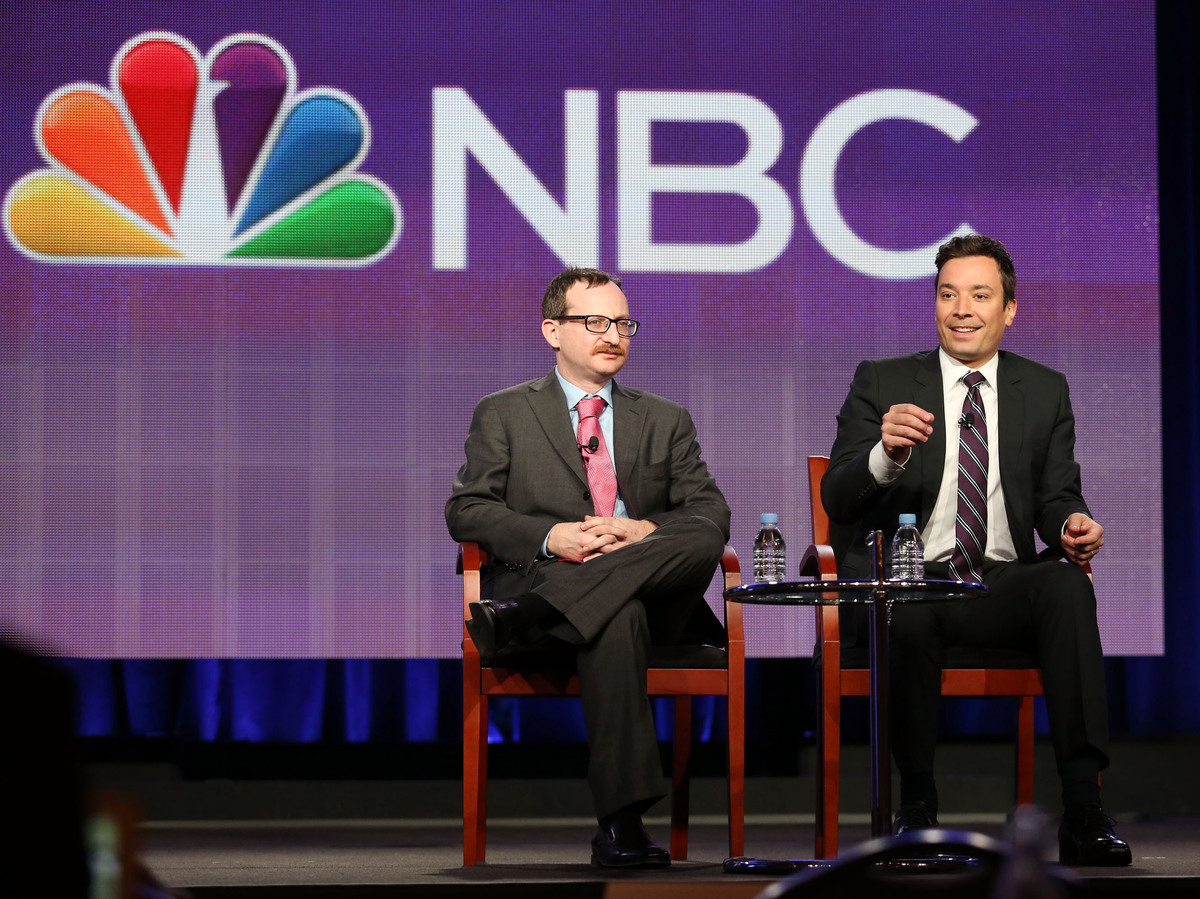 It felt like a rerun from a long-ago time, with a twist.

Once again, an NBC executive was facing a crowd of TV critic and reporters, saying nice things about Jay Leno just as he was leaving as host of The Tonight Show.

"It is no exaggeration to say that Jay Leno is the hardest working man in television," said NBC entertainment chair Bob Greenblatt Sunday, noting that Leno has kept The Tonight Show at the top of the ratings for nearly his entire 20-year run as host after Johnny Carson. "I'm very much hoping we'll enter into a new relationship with him after The Tonight Show and keep him here at NBC."

This was a flashback to a time four years ago, when a different NBC executive was saying nice things about Leno, just after Conan O'Brien had taken over The Tonight Show. Times were different then; ABC hadn't fully committed to Jimmy Kimmel, Leno's Tonight ratings had been strong and clearly nervous NBC suits were worried Leno might move to the alphabet network and demolish O'Brien's new Tonight.

So they gave Leno a weeknight, 10 p.m. show that crashed in the ratings. And then they put him back at The Tonight Show when everything fell apart.

But this was a new day. Nervous NBC executives don't seem as worried about a Leno defection, in part because ABC, CBS and Fox already seem to have solid late-night strategies with no room for a new host. Still, as Greenblatt piled on the compliments, kicking off a day where new Tonight Show host Jimmy Fallon and new Late Night host Seth Meyers would also schmooze journalists, two of the story's most important figures were conspicuously absent: Leno and Lorne Michaels.

It's the story of a subversive who has become the mainstream; the Canadian producer of a counter-cultural late night show on Saturdays who now controls TV's most historic late-night program, the home of showbiz institutions like Johnny Carson, Steve Allen and Jack Paar.

Ask Fallon about Michaels' input, and you get a sense of how ridiculously on message he has become as the date for his ascension grows near.

"There's no plan for anything, it's just that he's smart, he's great to work with, he's got great ideas and we can all trust him...we all came from that same stable, we grew up there," Fallon said of Michaels, echoing statements he's made before. "He never thought that he would produce The Tonight Show. We're both going to have a cocktail at some point and just say to each other, 'We actually did it. This is pretty fun.'"

But before that cocktail comes, the transition has to happen. Leno's last show is Feb. 6 (Billy Crystal, his first guest on his first Tonight Show in 1992, will return with pal Garth Brooks), Fallon takes over Feb. 17 with a week of shows at midnight during NBC's Winter Olympics coverage (Will Smith and U2 are guests on his first night), and former SNL head writer Seth Meyers takes over Fallon's Late Night show Feb. 24, with SNL alum Amy Poehler as his first guest.

The SNL-ization of NBC's late night will be complete.

Fallon already promises a new Tonight Show theme, based in part on a song by his house band, The Roots, but concocted as mash-up of ideas between him, his staff and the band. He'll make history bringing in a rap group as the house band for The Tonight Show, pulling the musicians back into the center of the franchise in a way viewers haven't seen for years.

This transition will likely go a lot smoother than four years ago. Fallon has a broader audience than O'Brien had, more of Leno's fans seem to like him, his relentlessly upbeat personality helps bridge the generation gap with fans and, with Michaels in his corner, there seems little chance NBC will pull the same bait-and-switch which doomed O'Brien.

Also, it helps that Leno isn't talking much. Reportedly, he's doing an interview with 60 Minutes' Steve Kroft, but the leaks that accompanied the O'Brien/Leno transition haven't happened here.

The sad result is that Leno isn't getting much credit for being the most-watched host in late night TV for more than two decades. And no one yet knows what he will do next, though no one can imagine the notoriously workaholic comic hanging up his microphone when he leaves The Tonight Show.

In one sense, these latest realignments are just another chapter in the long line of Jimmys, Jays, Johnnys and Davids who have ruled late-night television on the networks since the form began.

But in another, NBC is about to make serious history by trying, once again, to replace their late-night star while he's still popular with his audience.

And keeping that recent, sad history from repeating itself this time around might be their biggest challenge of all.