Accessibility links
New Mavis Staples Biography Will 'Take You There' Music critic Greg Kot's new I'll Take You There chronicles the life and times of gospel star Mavis Staples and her family — from their hardscrabble beginnings in postwar Chicago to the civil rights movement and stardom. Reviewer Richard Torres praises the book's emotional honesty — but says it really needs a companion album.

New Mavis Staples Biography Will 'Take You There'

New Mavis Staples Biography Will 'Take You There' 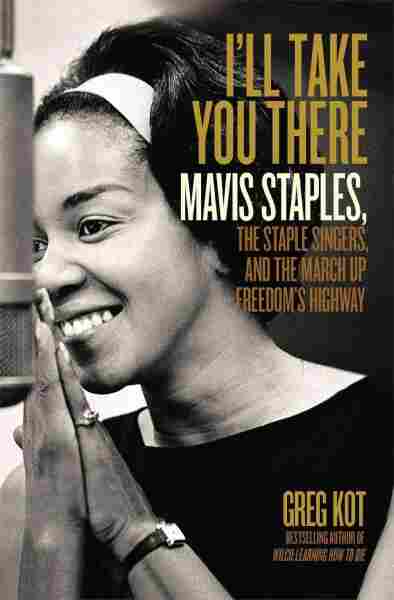 I'll Take You There

Mavis Staples, the Staple Singers, and the March Up Freedom's Highway

Title
I'll Take You There
Subtitle
Mavis Staples, the Staple Singers, and the March Up Freedom's Highway
Author
Greg Kot

There are vocalists, there are singers and then there are voices — the first aims for the ear, the second for the brain, the third for the heart. A voice turns a composition into an emotional experience. And each time we have that experience, it's the depth of the connection that we remember. Frank Sinatra was a voice. So too were Marvin Gaye, George Jones and Billie Holiday. Aretha Franklin is a voice. So is Bob Dylan. And so is the Staple Singers' Mavis Staples.

To hear Mavis Staples sing is to experience divine inspiration: She's a deep-voiced spiritual conduit with a sanctified syncopation. And as told by music journalist Greg Kot in I'll Take You There, the life story of Staples and her family is as compelling as their music. Fittingly, Kot's prose has the same directness as their singing.

In 1948, frustrated that his church group had blown off rehearsal, Mavis' father, "Pops," grabbed his guitar, gathered his children in a semicircle and began to teach them songs. An aunt overheard them and invited them to sing at her church. The song they sang — with a tiny deep-voiced Mavis on lead — was "If I Could Hear My Mother Pray Again," and it created a sensation. When the service ended, the family had been given an offering of $7 — and, crucially, invitations to perform at other churches.

Soon after, the family began to tour the church circuit. A fearless road warrior, Pops took his family to places in the segregated South that few African-American performers dared go. Despite a few harrowing incidents — chillingly recounted by Kot — the Staple Singers built up a considerable following. They met celebrities like Elvis Presley, who raved about Pops' guitar-playing, as well as gospel luminaries like Mahalia Jackson — who made a profound personal and professional impact on Mavis. They also met a young Aretha Franklin, who despite her obvious talent was fraught with insecurities that led to a tumultuous relationship with perceived rival Mavis.

Perhaps the most important Staple Singers fan was the Rev. Martin Luther King Jr., who asked them to open for him at many rallies and eventually became a close friend of Pops. The Stapleses found out about King's assassination just as they were leaving their Nashville hotel room for a performance, and Kot's description is heartbreaking. "Pops was trying to hold all of us, because we were all out of control," recounts Mavis. "We couldn't talk to each other for the longest time about it without crying."

'I'll Take You There': The Staple Singers' Rise From Church To Fame

That emotional honesty resonates throughout I'll Take You There. Kot provides an unflinching look into the Stapleses' struggles to maintain their spiritual and artistic integrity through a myriad of producers and record companies, as well as Mavis' battle to establish her solo career as the group wound down and finally ended with Pops' death in 2000.

I do have two major complaints about I'll Take You There. First, with the exception of Mavis, Pops and brother Pervis, Kot doesn't flesh out the Staples family as characters. The other sisters, and especially their mother, Oceola, remain ciphers. As a result, important life events like marriages seem to pop out of nowhere. For example, Cleotha wed in 1959 and temporarily left the group at her husband's behest. Huh? Where did he come from? I had the same reaction when Mavis married the previously unmentioned Chicago mortician Spencer Leak in 1964. (In fact, not much is said about Leak until the divorce eight years later.)

The final complaint? If ever there was a book that cried for a companion disc or download, it's this one. As good as Kot is in his descriptions of the Stapleses' performances, they can't compare to hearing those voices -- especially Mavis — providing a glimpse of the promised land. Nevertheless, I'll Take You There is a biography that's well worth the heavenly journey.

Richard Torres has written for many publications including XXL, The New Yorker, Rolling Stone, The Village Voice and The New York Times and has also penned album liner notes for a number of artists including Marvin Gaye, Richard Pryor and Dave Brubeck.

Read an excerpt of I'll Take You There