Accessibility links
7 Facts And 3 GIFs: Hellooo Curling The Olympic sport of curling is a combination of bowling, bocce ball, billiards and chess — all on ice, and with some sweeping involved. NPR's Tamara Keith spent some time learning how to curl, and put together this cheat sheet. 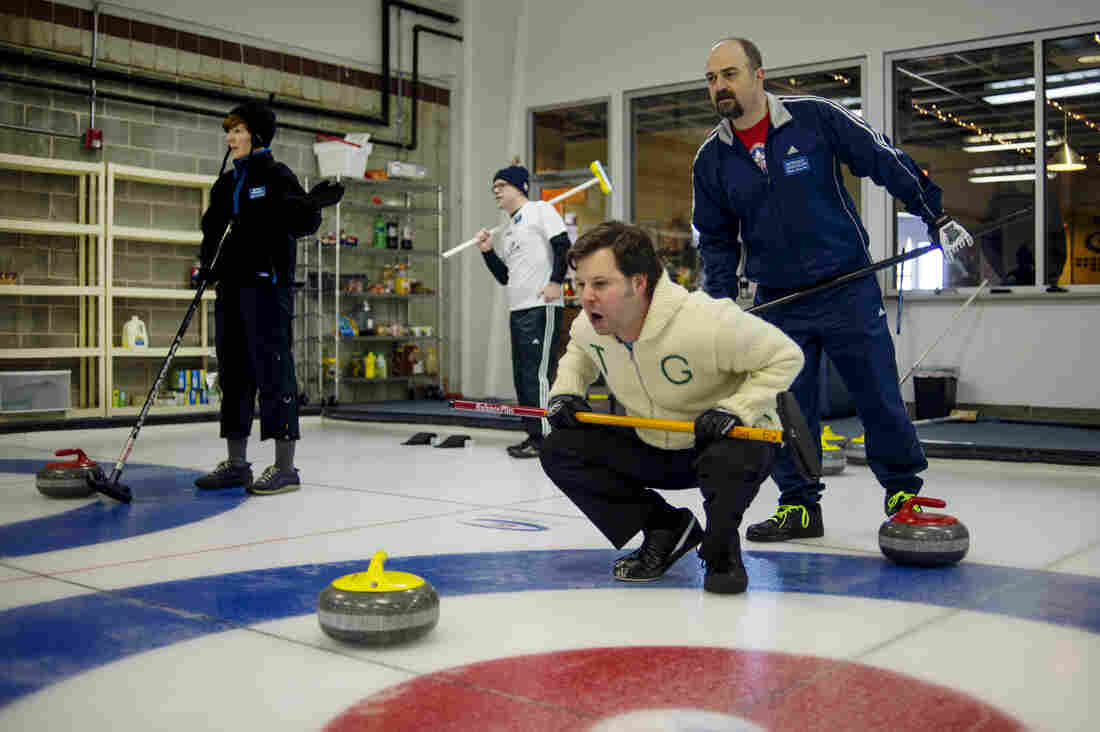 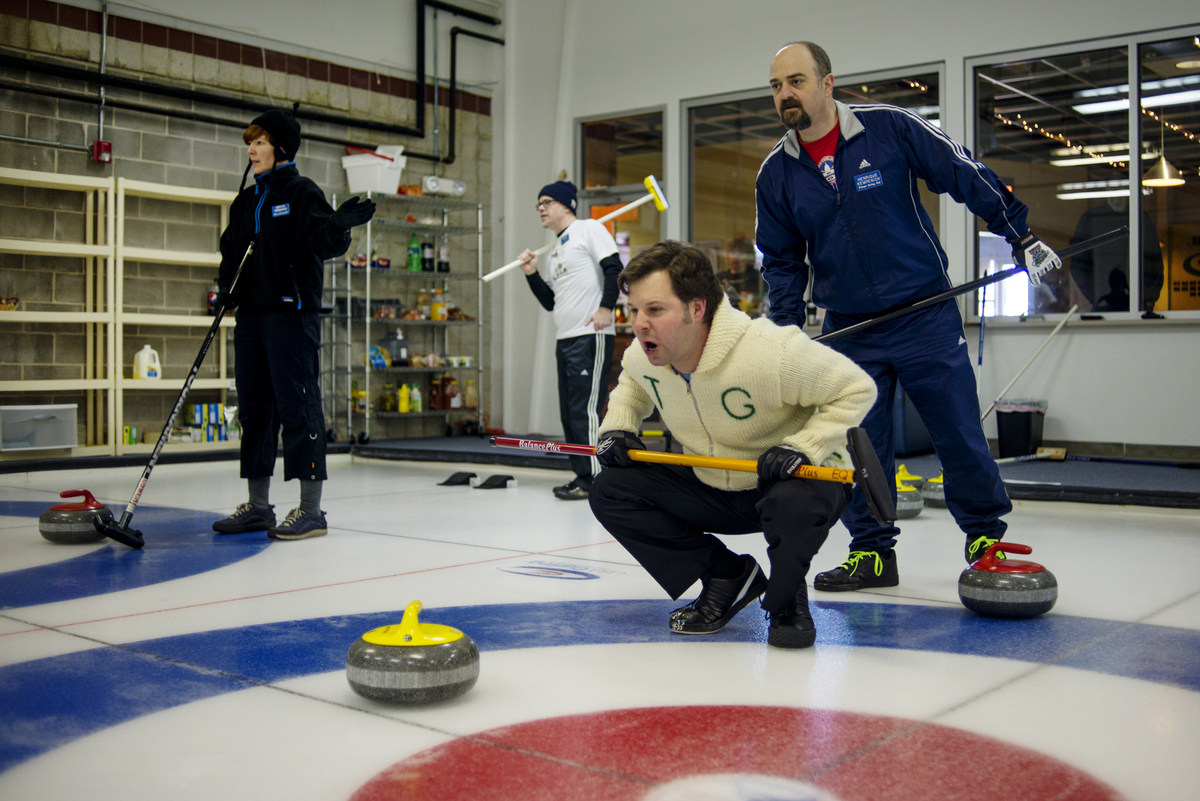 Most of the sports in the Winter Olympics involve great physical strength or agility. The goals are easy to understand: to go faster, to jump farther or more spectacularly. But one Olympic sport — curling — is as much about strategy and physics as physicality.

Curling is some combination of bowling, bocce ball, billiards and chess — all on ice. Oh, and there's sweeping involved, too, so throw some basic housekeeping into that mix. It's one of those sports people love to mock for not really being a sport. But don't tell that to Kevin White, an instructor at the Potomac Curling Club in a Washington, D.C., suburb where about a dozen newbies like me gathered on a recent weekend for a lesson.

Here are some things I learned:

1. The ice isn't smooth, and the stones are quite specialized.

"It has a textured surface," White says about the ice, "and what we do is we spray water droplets on here to give it what we call a pebbled surface." 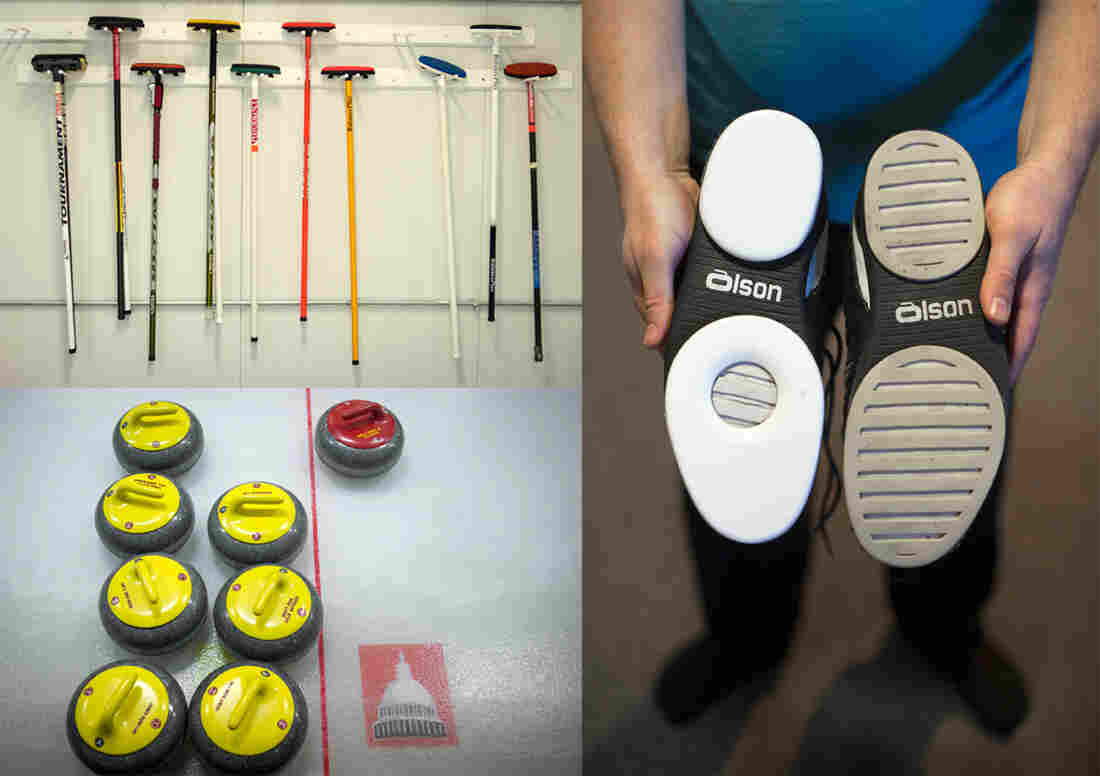 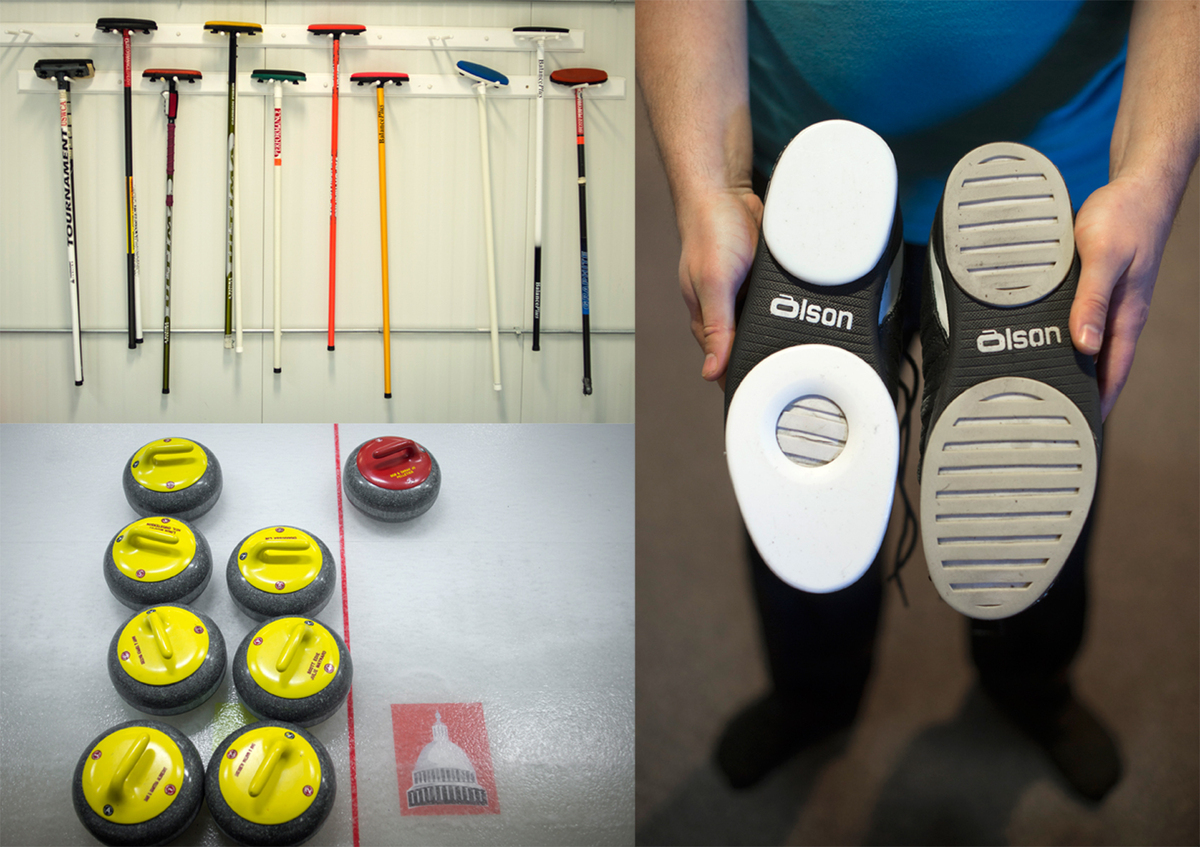 The pebbled surface helps the stones move on the ice. The stones are smooth and round, and squat like Saturn peaches, with handles on the top.

They're also quite specialized, according to instructor Joe Rockenbach: "The rocks are made of granite — a specific type of granite from Scotland. They weigh between 38 and 44 pounds."

2. The idea is to push the stone from one end of the ice to the other, aiming for the center of the "house," which looks like a bull's-eye.

"What do you think we call that? The button," says White. "Ever heard the term 'right on the button?' "

But getting the stone right on the button? That's harder than it looks.

3. This is how the curlers start:

Launching the stone involves getting into a low lunge position, pushing off with one foot, sliding on the other, and then when the athlete's body is moving along the ice at the perfect speed, releasing the stone with just the right amount of spin.

When done right, it works like a curveball, and the stone curls to the spot the curler is aiming for.

4. Unlike, say, bowling, the fun doesn't stop when the big heavy thing is launched down the ice. That's when the other members of the team start sweeping.

"This is where the 'it feels like a sport' part comes in, and trust me it does," Rockenbach says.

5. A broom is used for sweeping, though it actually looks more like a spongy mop. Sweepers go out ahead of the stone, melting the ice ever so slightly with the friction of the sweeping.

Rockenbach says the top-level sweepers can burn 500 calories an hour: "Sweeping accomplishes a couple of things. It can make the rock go farther; it can straighten out the path that the rock is traveling; it can burn calories; it can make you warm."

6. Strategy matters as much as sweeping.

Each round is called an end (yes, this sport has a language all its own.) Each team has four players, and each player throws two stones. The team with the rock closest to the center of the button after all those throws wins the end. Knocking the opposing team's stone out of the house or blocking its path are key parts of the game. This involves intense strategy sessions — and this is where curling really turns into chess on ice.

How many points the winner gets depends on how many stones the winning team has closer to the center than their opponents' nearest stone.

7. After eight (recreation) or 10 (Olympics) ends, the game is over, but the players aren't done.

"The most important rule in curling is the winning team buys the first round after the game is over," says Rockenbach.

The post-game hangout is called "broomstacking," and it's actually really bad form if a player doesn't do it.

That's even true sometimes at the Olympics — which brings us back to that whole argument about whether curling really, truly is a sport.

You can follow NPR's coverage of the Sochi Olympics at our new blog, The Edge.