Accessibility links
Tom Hanks Is 'Captain Phillips' In High-Seas Hostage Drama The film tells the true story of Richard Phillips, whose container ship was hijacked by Somali pirates in 2009. Navy SEAL sharpshooters eventually freed the captain from the small lifeboat where he was held hostage for five days. Tom Hanks stars in the film, which is directed by Paul Greengrass. 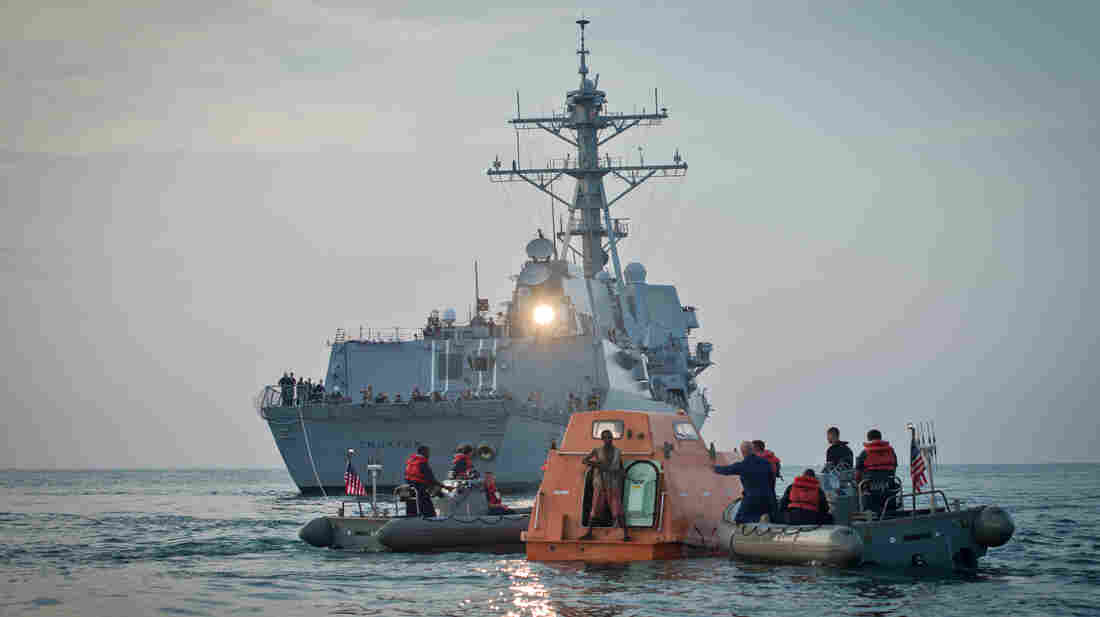 Director Paul Greengrass says he thought the film would feel more authentic if it was all shot at sea. He had personal motivations, too: "My father was in the Merchant Marine and was at sea all his life so I wanted to explore his world," he says. Jasin Boland/Columbia Pictures Industries hide caption 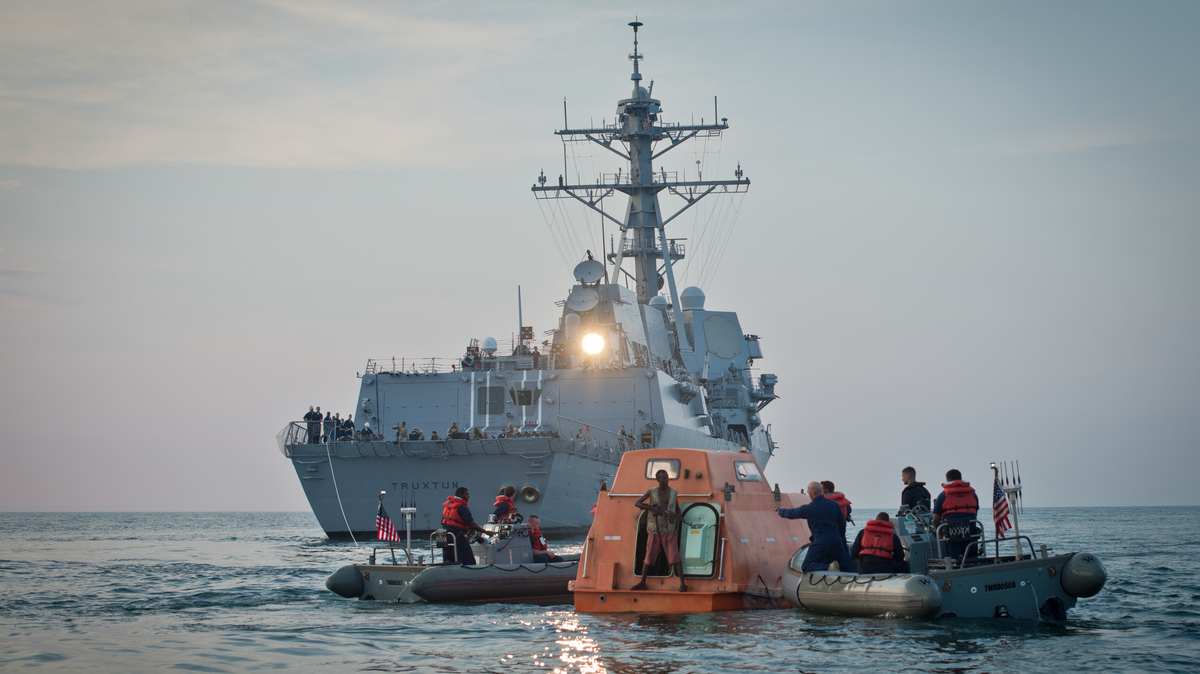 Director Paul Greengrass says he thought the film would feel more authentic if it was all shot at sea. He had personal motivations, too: "My father was in the Merchant Marine and was at sea all his life so I wanted to explore his world," he says.

This interview was originally broadcast on Oct. 7, 2013.

In April 2009, Somali pirates boarded an American-flagged container ship and took its captain, Richard Phillips, hostage on a small lifeboat. That led to a five-day drama at sea, much of it covered on television, as a U.S. Navy destroyer tailed the lifeboat and Navy SEAL sharpshooters eventually freed the captain. In 2010 Phillips wrote a memoir called A Captain's Duty and the harrowing experience has now been adapted into a film called Captain Phillips.

Captain Phillips is directed by Paul Greengrass and stars Tom Hanks, both of whom join Fresh Air's Dave Davies to talk about the film. Greengrass began his career as a journalist making documentaries, often in war zones. His feature films — including The Bourne Supremacy, The Bourne Ultimatum, Bloody Sunday and United 93 — are known for fast-paced action and documentary-like drama. Hanks is a two-time Academy Award winner, getting back-to-back best actor Oscars for Philadelphia and Forrest Gump. He also got Oscar nominations for his roles in Big, Saving Private Ryan and Cast Away.

On what drew them to the story 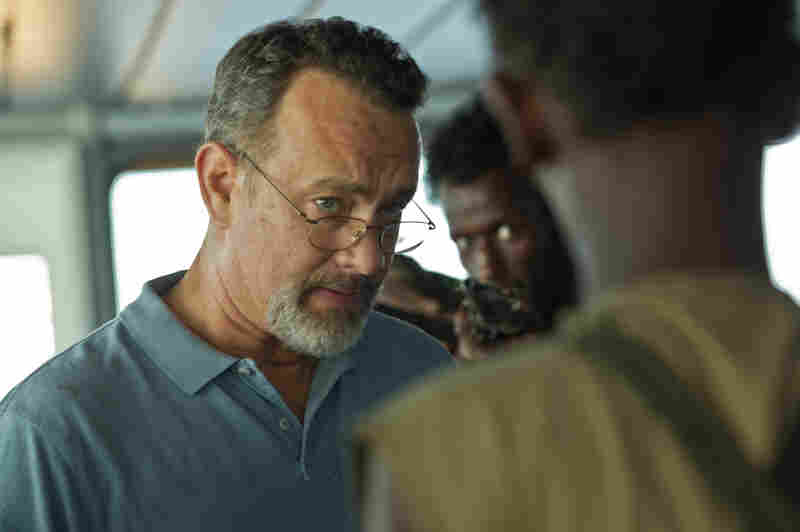 Prior to filming, director Paul Greengrass kept the pirate crew and the boat crew separate to make the hijacking scenes feel more authentic. "The hair did stand up on the back of our heads," says Tom Hanks, above. Hopper Stone, SMPSP hide caption 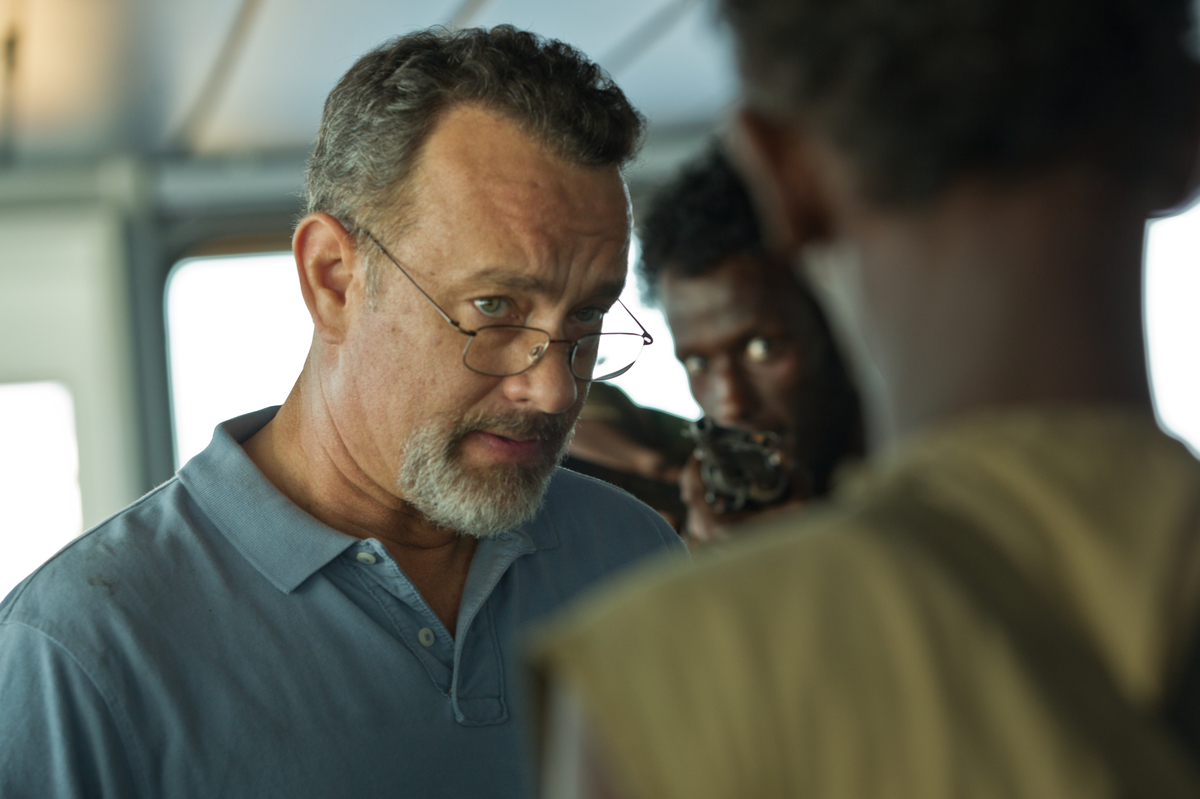 Prior to filming, director Paul Greengrass kept the pirate crew and the boat crew separate to make the hijacking scenes feel more authentic. "The hair did stand up on the back of our heads," says Tom Hanks, above.

Hanks: The story itself was ... ripped right out of today's headlines. But all of the little intricacies of how a ship like that is run, and the details of the nature of the Somalis, and the particulars of everything that happened in those crucial hours on the ship and the days in the lifeboats was loaded with human behavior that was fascinating, compelling and unknown. ... There's a way of making this movie in which it pays most attention to the crackerjack action aspect of it — and that was always going to be a part of it in my head. But the particulars of how a guy like Richard Phillips starts working out this algorithm in his head the moment he first sees the pirate skipper approaching, that was brand new territory.

Greengrass: I really wanted the experience of shooting on the ocean. Part of that was personal, my father was in the Merchant Marine and was at sea all his life so I wanted to explore his world. But also from the film point of view, I felt it would be a more authentic film if we all shot it together on the ocean and we had the real ships. ... We were on the sister ship [to Phillips' ship, the Maersk Alabama] ... it was an identical ship, it had a crew, we could draw information from the crew, and draw information and veracity from the actual environment. I think it made it an endlessly fascinating experience [and] a richly creative one from a filmmaking point of view.

On the difficulties of shooting on the water

Greengrass: Filmmaking is about resources, you need to be able to supply your units, your camera units, your sound units, you need to be able to get all your costumes and makeup and all the infrastructure of it — chargers, walkie-talkies, everything. ... It's not like saying, "Can you just get Joe to run a couple of walkie-talkies up to the stage?" Well, if you're 20 miles out to sea, that's quite a prodigious operation, and you've got to climb up 30-40 feet of ladder. So just the sheer logistics are difficult. 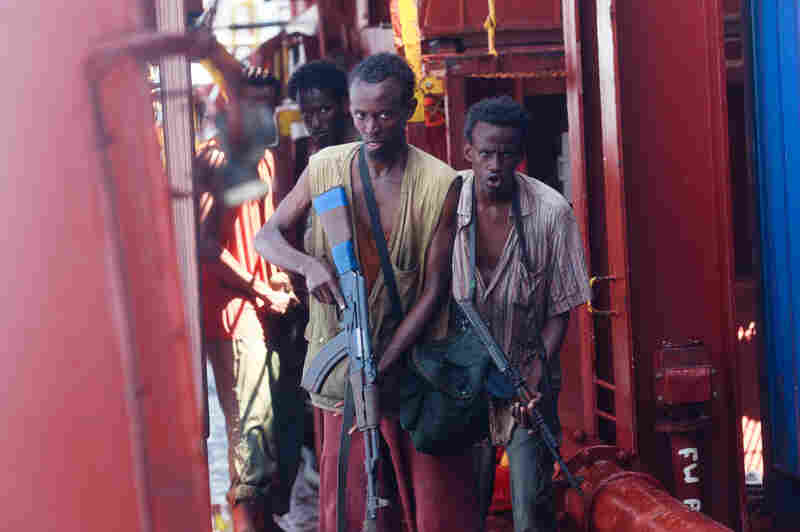 Greengrass says it was important to him to find young Somali actors to play the part of the pirates. He held auditions in Minneapolis -- where there is a large Somali community -- and hundreds of actors showed up. Hopper Stone, SMPSP hide caption

And then you've got the weather, which is a profound issue. A lot of the shooting of this involved very small crafts, those skiffs, and what I wanted to make the film play was water that was dangerous enough to make it so you understood the drama of a skiff attack on a fast-moving container ship, but obviously that involves very large safety issues. We needed sea that was aggressive enough to be dynamic but not so aggressive that it was dangerous or too dangerous.

On Somali pirates and how Greengrass cast them in the movie

Greengrass: Somali piracy is international organized crime, that's actually what it is. These young men with their AK-47s attack from the coast of Somalia, but this is activity that is financed and organized thousands of miles away in Kenya and Nigeria and ultimately in Europe and in some cases in the U.S.; it's a highly organized criminal activity. The young men who are the guys that actually attack the ships, they're just the triggermen in essence, and of course they come from a country that's everything you'd expect and associate with a failed state: collapsed central government, warlordism, crime, gangs, terrorism in certain parts of the country. It's everything you'd imagine and more, and what you want in this film is to portray something of that with authenticity, there's nothing more dangerous than a young man with a gun who's got nothing left to lose.

It became important, from my point of view, to find young Somali actors to play those parts, and that was the real central challenge of the casting process. ... There's no Somali acting community in Los Angeles or New York or Chicago so we had to go to Minneapolis where the largest Somali community is and what we found there was a very vibrant and rich and storied community, filled with musicians, actors, filmmakers, writers. ... So what began as [what] I thought would be a very difficult endeavor became very quickly simple. We had 7- or 800 people turn up for the first casting and very quickly we identified Barkhad Abdi and his three friends, as it turned out.

Greengrass: I didn't want them to have become friends because in the end the job was to come through that door and terrorize and threaten and be believable. So we kept them apart, and it's sort of the trick you play, I'm afraid, when you're a director. You're trying to create moments that everybody is looking forward to in a shoot ... something that's two, three weeks down the road where everybody is going, "That's going to be an exciting day when those two groups meet each other." And I think it got everybody excited, and there was a good tension in the air.

Hanks: We figured out in the crew, "We're not going to meet these guys, are we? It's not going to be a party at the hotel ..." We had seen little dots on the horizon because they had been working on the skiffs far away ... it was tense. We were scared in the best way possible because we know the guns aren't loaded, but those guys ... came in pumped up with all of the anxiety of being there in the first place, and all the expertise they had learned, all the work they had done, so ... when they blew that door open and came in screaming at us, I saw four of the skinniest, scariest human beings on the planet and the hair did stand up on the back of our heads. It was chaotic. It seemed like the rules had gone right out the window. In one way, we're just trying to survive the scene.

In April 2010, Capt. Richard Phillips appeared on Fresh Air to talk about his memoir A Captain's Duty: Somali Pirates, Navy SEALs, and Dangerous Days at Sea. You can listen to that conversation here:

Surviving A Somali Pirate Attack On The High Seas

She had a whole procedure equal to an emergency medical technician. So we cranked it, let fly, the very first take fell apart for technical reasons and it was loaded with moments of great self-consciousness, even from the Navy folks. ... [We said to them] "There's nothing you can say that's incorrect and there's nothing you can do that is not going to be worthwhile. So go ahead and do it." And we did five or six versions of it over a dizzying period of time.

... What I was working from was actual photographs and a little bit of home video of Phillips on board the [destroyer USS] Bainbridge when people are congratulating him saying, "Welcome home." And he's in an absolute daze, you can see in his body language and in his eyes, he's barely cognizant of the surreal reality of what has just happened to him and on top of that, it was a very nice lady and a very crack team being sweet to Rich Phillips, so it ended up being kind of evocative.

... [What] she says that is just heartrending ... is, "You're OK. You're going to be OK." And those are the greatest words that a human being could hear in that circumstance.