Accessibility links
Growing Up 'White,' Transracial Adoptee Learned To Be Black Adopted by loving white parents as a baby 42 years ago, Chad Goller-Sojourner says he was an adult before he could love his own reflection. He tells the story of what life was like growing up in a family of a different race than his own. 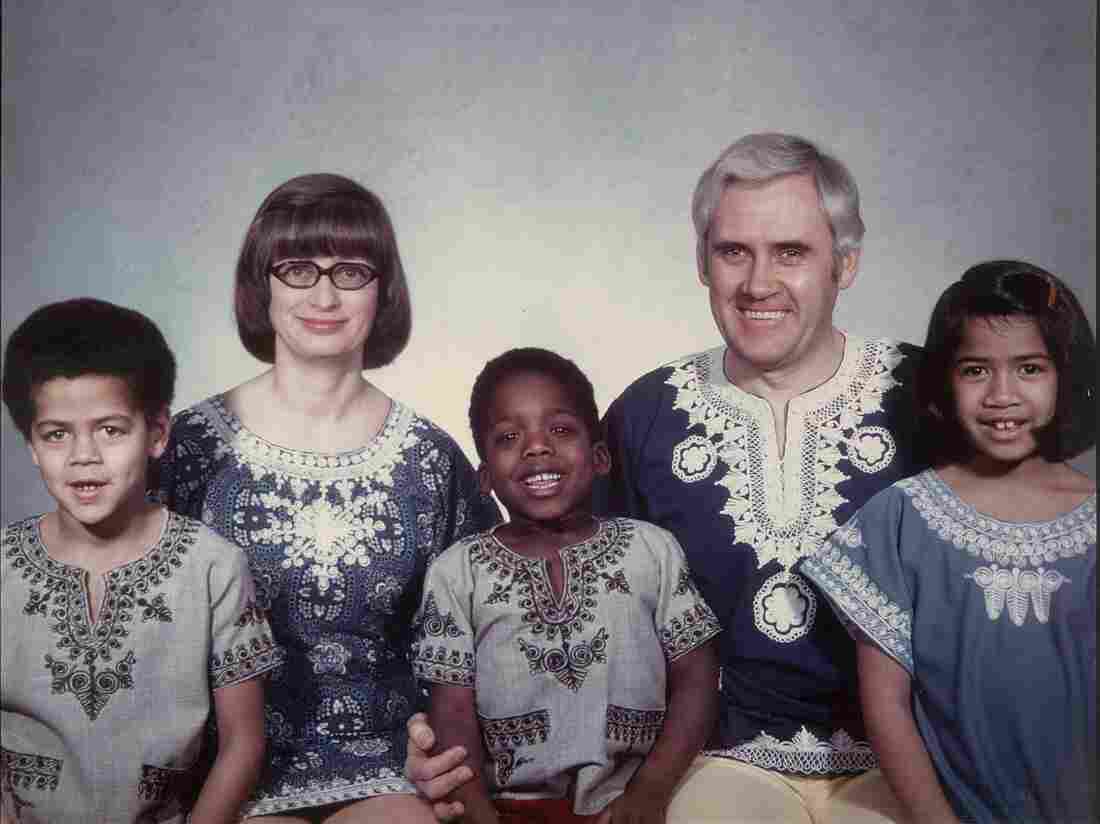 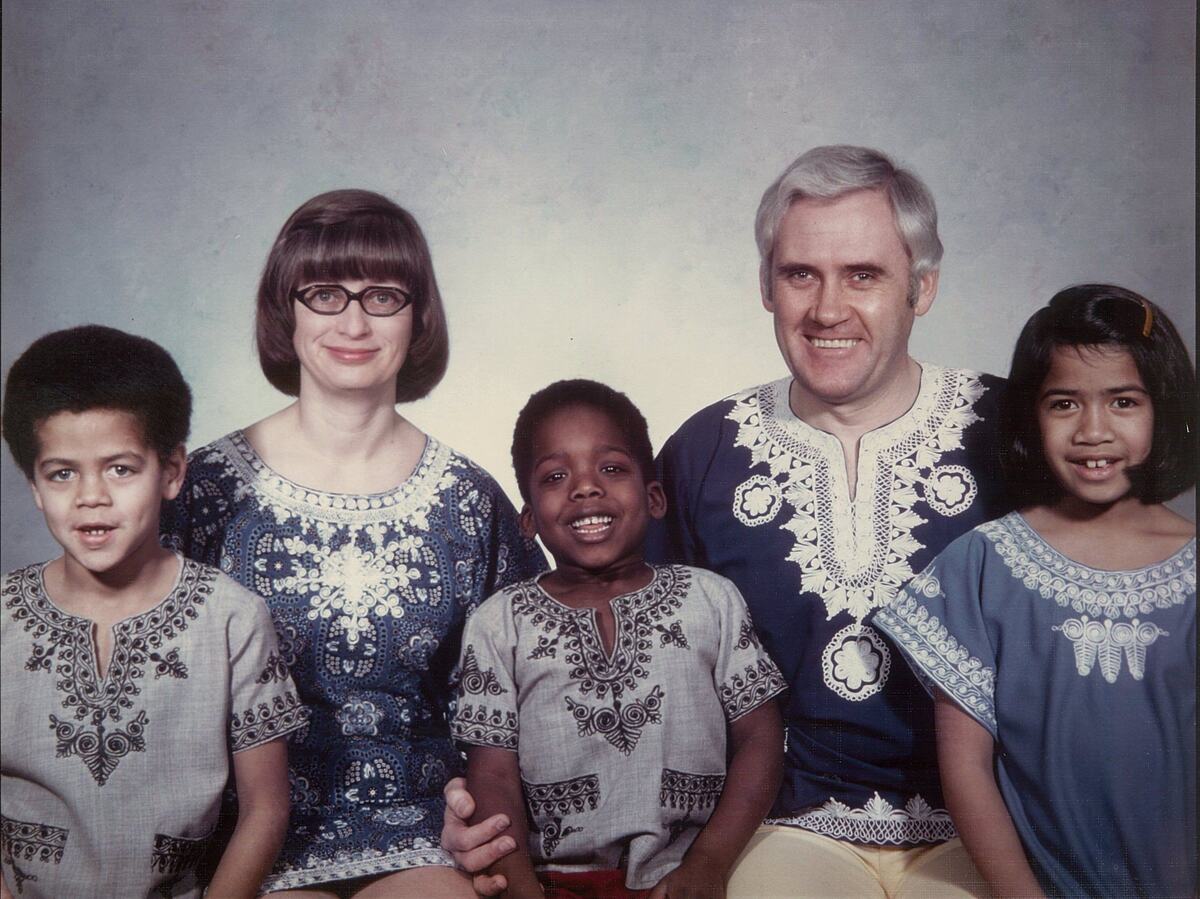 Chad Goller-Sojourner (center) and his family.

A couple of weeks ago, Weekend Edition Sunday host Rachel Martin spoke to Rachel Garlinghouse, a white adoptive mother of three African-American children. Our conversation on transracial adoption drew a lot of responses, so we decided to follow up with another perspective.

Chad Goller-Sojourner is African-American. In 1972, when he was 13 months old, he was adopted by white parents in Tacoma, Wash. He and his siblings are all different races than their parents.

They lived in a white suburb, but his parents worked hard to expose him to other people who looked like him, and checked out every library book with a black author they could find. They even sent the children to a more diverse school in a different neighborhood.

I learned to fall in love with myself and being black in my mid- to late-20s. And although it was a beautiful experience, it shouldn't have taken 25 years to do that.

But Goller-Sojourner, now a writer and solo performer based in Seattle, says there was a limit to what his parents could provide.

"One of the things I think was hardest for me is I didn't have any independent relationships with black people, especially adult black people, till I was an adult," he says. "I was 25 before I saw a black doctor."

As a child, he experienced racism before he had the language to understand it, he says.

"For instance, shopping: I learned pretty early on that when people knew I was with this white lady, that they treated me differently," he says.

As he got older, he realized that if he didn't want to be followed in a store, he'd better make sure people knew he was with her.

"I would hold up some outfit and say, 'Hey, Mom, could I get this?' And she'd be like, 'No!' Which let everybody within earshot know that I was with a white lady, and then suddenly, that privilege came back over me."

Goller-Sojourner says every six months or so, he'd hear a racist insult or some other offense, and his mother would rush to his side. Still, it was confusing. 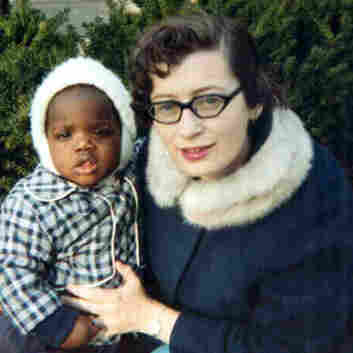 "My source of love and hate came from the same well," he explains. "My parents looked just like the same people who were calling me a nigger or porch monkey. ... My mother and my parents were in my corner, but it was still difficult to process."

In college he began what he calls a "descent into blackness and out of whiteness." He describes it as a journey, giving up the privileges he claimed as a child of white parents and learning to accept his identity independent of them. He added Sojourner to his name.

"I moved to New York City, where for the first time I found my own reflection pleasing," Goller-Sojourner says. "I learned to fall in love with myself and being black in my mid- to late-20s. And although it was a beautiful experience, it shouldn't have taken 25 years to do that."

On the website for his most recent show, Riding in Cars with Black People & Other Newly Dangerous Acts: A Memoir in Vanishing Whiteness, Goller-Sojourner describes the experience as aging out of "honorary white and suburban privilege and into a world where folklore, statistics and conjecture deem him dangerous until proven otherwise."

He stopped trying to let people know that he came from a white home, that he was somehow entitled to better treatment.

"I used to say that in different ways," he says. "I carried a picture of my family. I tucked it behind my license for years, and wherever the license went, the picture followed. Sometimes whispering, sometimes shouting, 'I'm not the black man you think I am.' I stopped saying that."

He says that while a black home may be best for a black child, he's not opposed to transracial adoption.

"Here's what gets people upset: Part of my story is, I was 13 months old, and according to the social workers in my file, I'd already been passed over by two or three black families because they considered me too dark," he says.

His parents were among the first wave of transracial adopters, and did their best to prepare him for the real world. Parents today can do even better, he says.

"I don't have a checklist," he says, "but if I did, it would sound something like this: If you don't have any close friends or people who look like your kid before you adopt a kid, then why are you adopting that kid? Your child should not be your first black friend."

Do you think kids are better off if they're adopted by parents of the same race? Tell us your story on the Weekend Edition Facebook page, or in the comments section below.