Accessibility links
'Nothing Is Fixed': Recovery Is Slow In Typhoon-Hit Philippine City Typhoon Haiyan was one of the strongest storms ever recorded at landfall when it struck the Philippines late last year. More than 6,000 people were killed and millions more were displaced, and authorities are still struggling with clearing away debris, rebuilding houses and counting the dead. 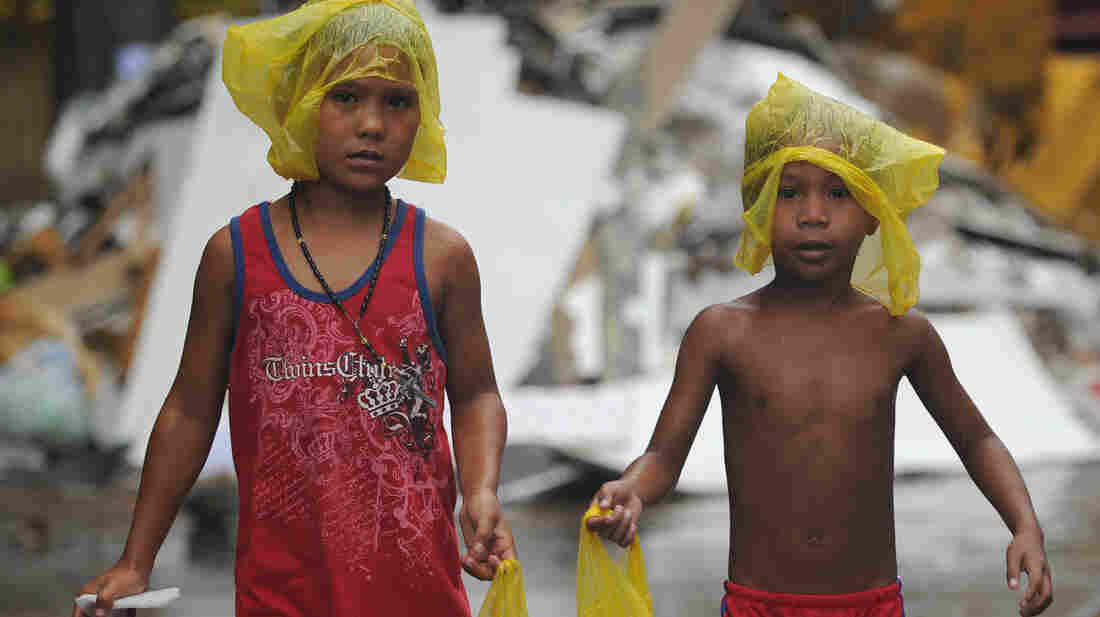 Young survivors of Typhoon Haiyan brave December rain as they ask for gifts from residents in the streets of Tacloban, the Philippines. Months after the storm, cleanup is still ongoing and many of the more than 6,000 dead have yet to be identified. Ted Aljibe /AFP/Getty Images hide caption 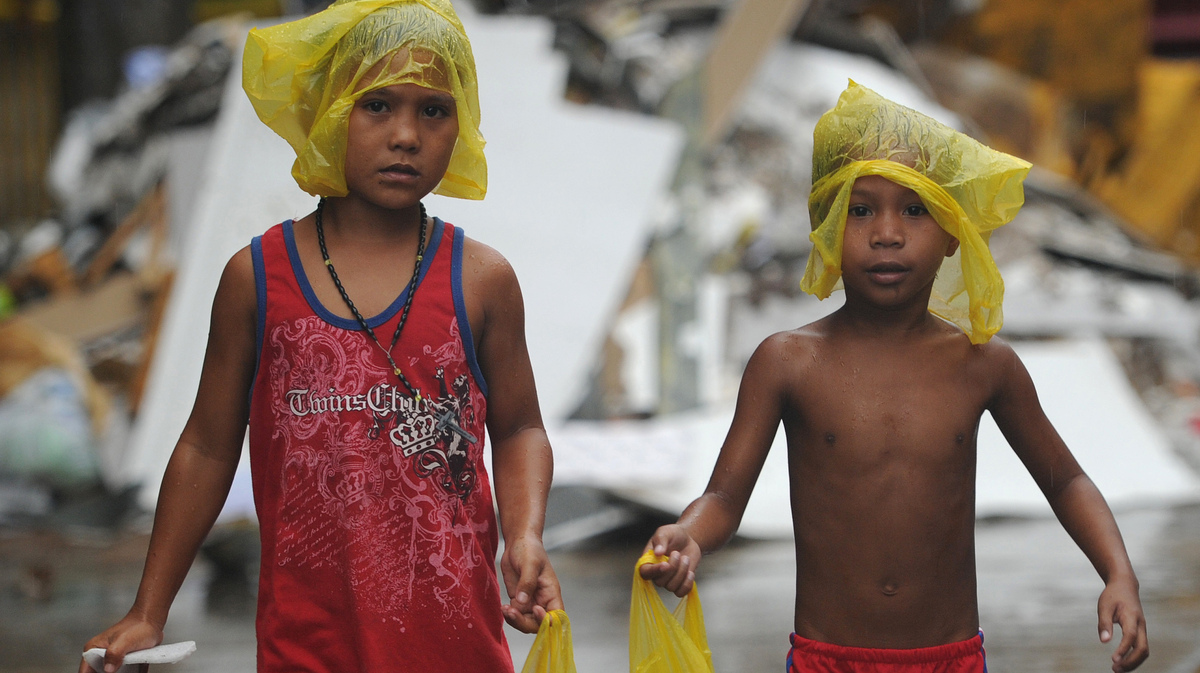 Young survivors of Typhoon Haiyan brave December rain as they ask for gifts from residents in the streets of Tacloban, the Philippines. Months after the storm, cleanup is still ongoing and many of the more than 6,000 dead have yet to be identified.

Typhoon Haiyan clocked in at 147 mph when it struck the Philippines late last year. It was one of the strongest storms ever recorded at landfall.

More than 6,000 people died, and nearly 2,000 more are still missing. Millions were displaced when their homes were destroyed or washed away. And authorities are still struggling with the simplest tasks, such as clearing away debris, rebuilding houses and counting the dead.

NPR's Kelly McEvers recently returned from the city of Tacloban, which bore the brunt of the typhoon that struck on Nov. 8. The airport there has no walls and no control tower. It is clearly a place with a lot of work to do.

Sorting Through The Aftermath

Reporter Aurora Almendral was in Tacloban four days after the storm and has returned several times since. The main airport road that heads downtown, which is now clear, was much different then. She says it was completely blocked by debris.

There has been a lot of cleanup in the months since the storm, and Almendral says even some of the greenery is coming back. But she points out that many areas still lack electricity and that recovery efforts are far from finished. 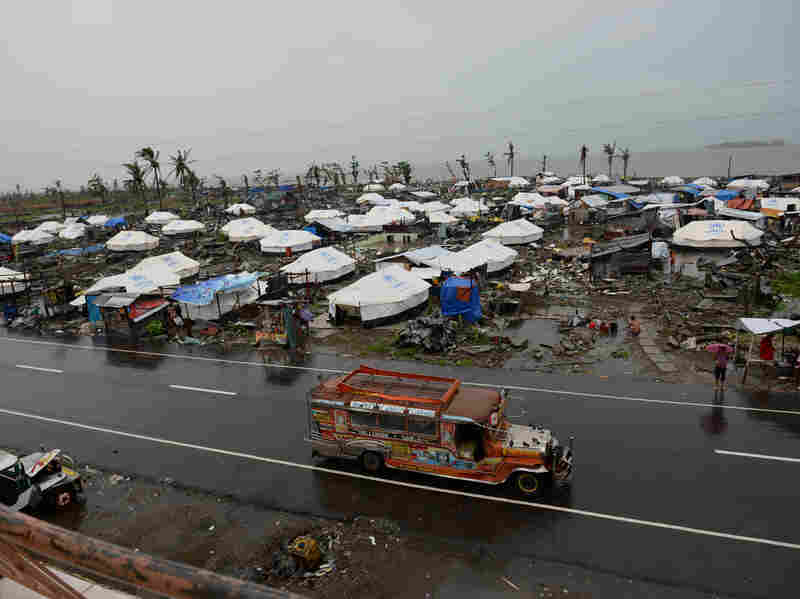 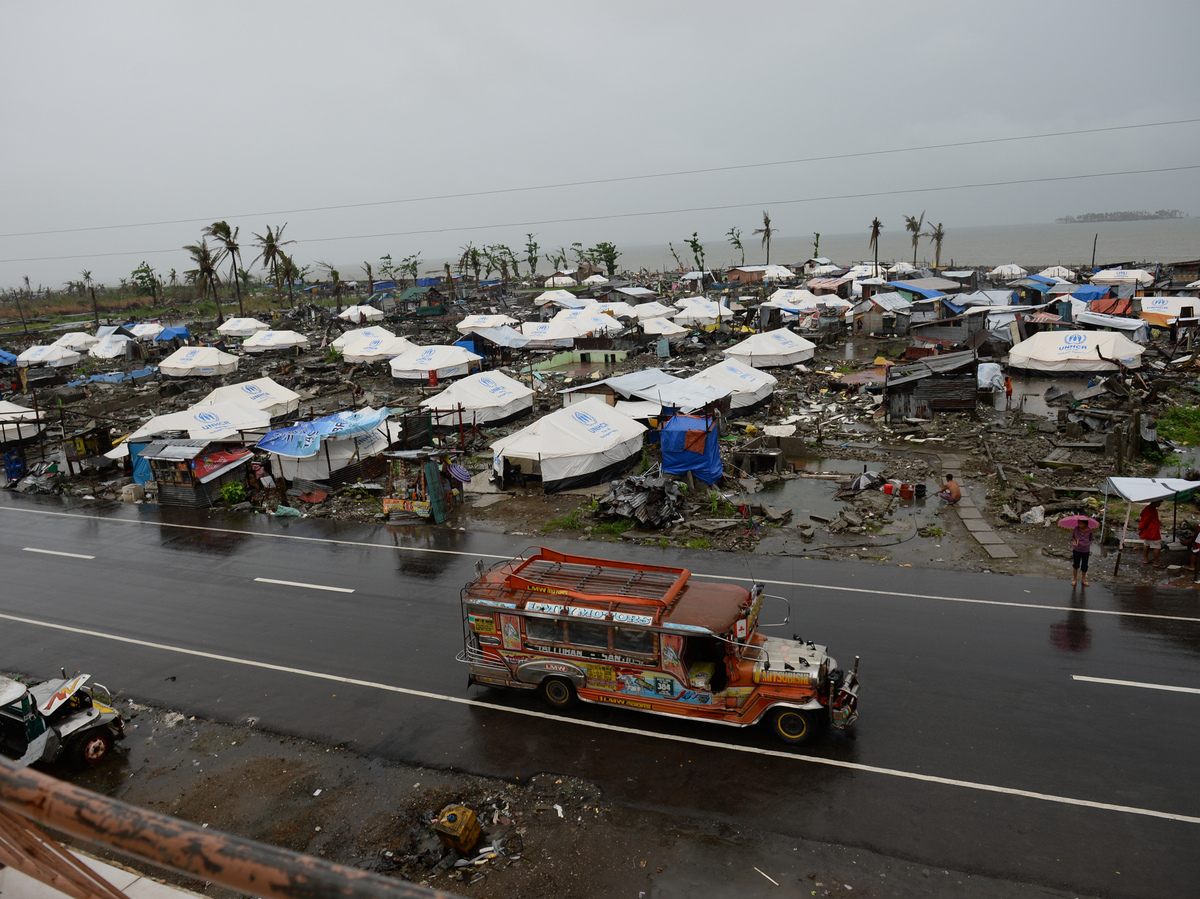 Tents are erected as temporary shelters for residents whose houses were flattened by Typhoon Haiyan in Tacloban city, Leyte province, on Dec. 25.

"I mean, it's about 100 times better probably, but nothing is fixed," she says. "So it's been cleared, but nothing has been repaired for the most part."

Closer to downtown Tacloban, there are more people in the streets. Shops are open, though many consist of little more than a table with stuff piled on it to sell. One stall has instant coffee, limes and boiled eggs. There is food, and people are even selling lumber. But inflated prices are also a problem.

"The food is quite expensive," Almendral says. "It's just slightly less than double the price for something, which is huge, especially if you're making zero money because you don't have a job."

Beyond downtown is another hard-hit area — where massive ships crashed onto shore and destroyed entire neighborhoods. Without many options, some people are already building their stilt houses exactly where they were before.

"Anything you see standing has been rebuilt. This entire area was completely flattened," Almendral says.

The area likely will be flattened yet again if another typhoon hits, if authorities don't provide housing.

The Philippine government is building temporary dorms called bunkhouses, where each family lives in one small room. But critics say the bunkhouses aren't strong enough to withstand the next storm, and they say with 4 million people displaced, a few thousand bunkhouses aren't nearly enough.

Arjun Jain, of the U.N. High Commissioner for Refugees office, says the era of big storms is upon us and that officials, international organizations and communities need to do better at responding.

Jain says both the Philippines and other coastal countries have to be prepared to deal with future storms with better contingency plans and faster recovery plans.

Clearing Up The Dead

One thing Tacloban was not prepared for was how to deal with so many casualties.

Just before Haiyan hit, Bubi Arce and his friend decided to take shelter in a two-story apartment.

"Communication [was] cut off, TV gone, electricity gone, everything gone. And the roof flew away," Arce tells NPR's McEvers.

Water filled the first floor, so they went to the second floor, eventually climbing on top of a wall to stay out of the water. By the time the water receded and they got outside, entire neighborhoods were missing; cars, furniture and fish floated by. Under a bridge, Arce and his friend saw their first dead body. And he knew that if a body had ended up that far inland, "there's going to be a lot of dead people."

Arce went to city hall and found a working truck and a couple more friends. That's when he decided he had to start picking up bodies. He says he picked up five in the first run, then seven, then 15 and then 20 — and that was just on the first day.

"I [knew] nobody would do it," he says when asked why he decided to start picking up the bodies.

At first, Arce and his team just put the bodies in a big pit, a mass grave in an existing cemetery. Then an alphabet soup of federal agencies showed up, each with its own idea about what to do. Aid workers say the effort was pretty badly managed.

More than two months after the storm, Arce has been appointed the head of Task Force Cadaver in Tacloban. Which means even though he's never done this before, he's the guy in charge of collecting, burying and identifying bodies in the city — about 2,500 of them. That's about a third of the total dead in the whole region.

A Photographer's Last Dispatch From The Philippines

After The Storm: Commerce Returns To Damaged Philippines City

While things are getting better, there are still a lot of challenges. First and foremost: what to do with the bodies. Most people in Tacloban agreed that an open, mass grave was no good. So just a few weeks ago, it was finally covered over with dirt. Now, authorities from the Philippine equivalent of the FBI are digging up these bodies, cataloging them and burying them separately until they can be identified.

The other issue is how to make those identifications. People who want to match a body with a missing loved one have to look in a stack of handwritten notebooks at a local branch of the Philippine National Police. The problem is that its office was blown away by the storm, so the notebooks are kept under tarps inside a rain-soaked tent. The notebooks are filled with case numbers, the times, dates and locations the bodies were discovered, and a description.

So far, only a few hundred bodies have been identified. Officials are taking some DNA samples, but there's not enough money to test them.

Siobhan Reddel of the World Health Organization is in Tacloban to help Arce and his team. Standing in the rain at a temporary cemetery, she says the ultimate goal is a monument to those who died in the storm.

"We have to know now that there will be some that won't be able to be identified," Reddel says. "And that will be important for the community and individuals to understand that they can come to a particular place, a particular monument and grieve, knowing it represents the loss of that person as well."

And bodies are still being found every day. Reddel is trying to get funding to bring in a team of dogs that are trained to scan the massive piles of debris and find the remaining bodies. She says that way, people won't think their dead relatives are still out there.

Reddel and Arce say there's more to do, but they hope their failures and successes will be a lesson for cities and villages hit by the next Pacific storm.

For the people still looking for their relatives, it isn't much comfort.