Accessibility links
Grand Canyon May Be Older (And Younger) Than You Think About 6 million years ago, a new mineral analysis suggests, a mighty river zigzagging across the Colorado plateau may have found its way into older gorges, greatly enlarging them to create the West's most spectacular canyon. Still, some geologists aren't sold. 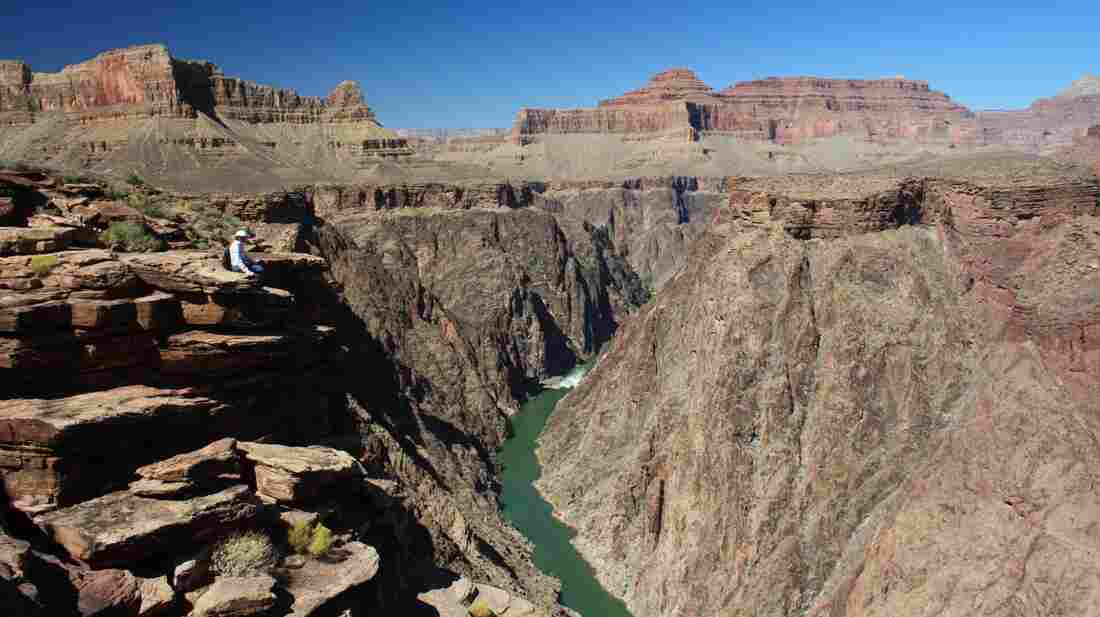 The eastern Grand Canyon was about half-carved (to the level of the red cliffs above the hiker) from 15 million to 25 million years ago, an analysis published Sunday suggests. But the inner gorge was likely scooped out by the Colorado River in just the past 6 million years. Laura Crossey/University of New Mexico hide caption

In recent years geologists have hotly debated the age of the Grand Canyon. Some think it's young (just 6 million years old), while others argue that it dates back 70 million years — to the days of dinosaurs.

Now one group says the Grand Canyon is neither young nor old. Instead, these geologists say, it's both.

In the journal Nature Geoscience, Karl Karlstrom, of the University of New Mexico, and some colleagues describe a new creation story for the Grand Canyon. They think that about 6 million years ago, a river zigzagging a path across the Colorado plateau found part of its way through canyons that already existed.

We're making a major leap, from thinking of a canyon that has a simple history ... to a more sophisticated understanding of how landscapes actually evolve through time.

So, although the Grand Canyon as a whole is relatively young, they say, a couple of sections are ancient.

"We're making a major leap from thinking of a canyon that has a simple history ... to a more sophisticated understanding of how landscapes actually evolve through time," Karlstrom says.

It wasn't too long ago that scientists generally agreed on a simpler history. Karlstrom was part of the team that developed a walking path called the Trail of Time along the south rim of the Grand Canyon. Signs there tell visitors that the Colorado River carved the Grand Canyon in the past 6 million years.

"The Trail of Time exhibit has what we considered at the time, in 2010, to be the scientific consensus," says Karlstrom, who hiked the canyon as a kid and has studied it professionally for 30 years.

Figuring out when a canyon was cut is not easy, he says, because rivers do their sculpting through erosion. 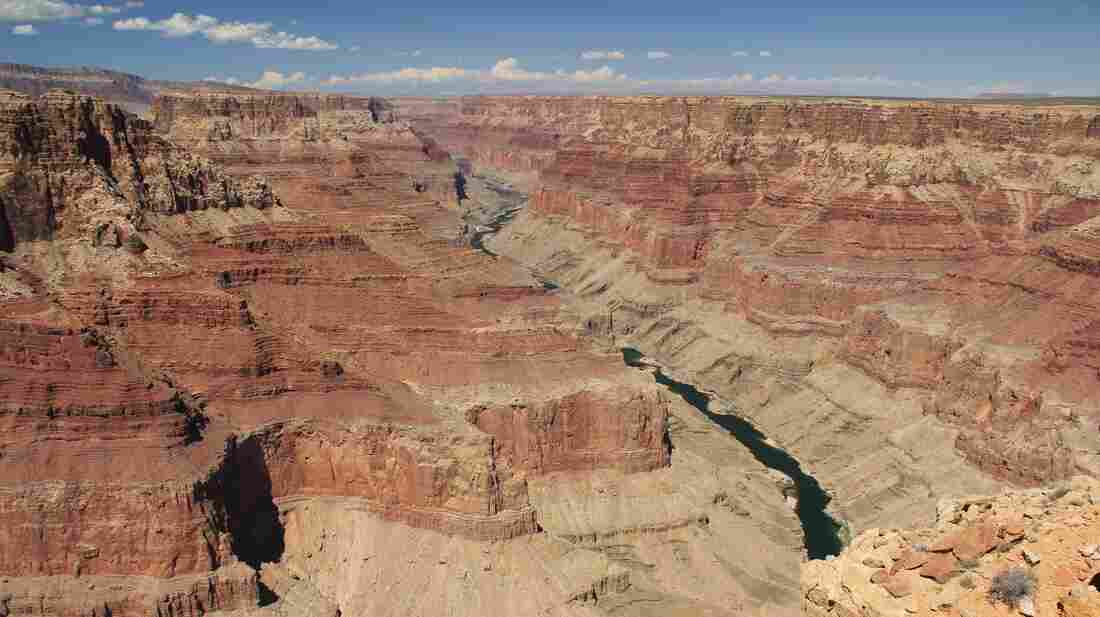 Recent analyses suggest that this stretch of the Grand Canyon (Marble Canyon, near Cape Solitude) was beneath more than a mile of layered rock until 6 million years ago, when a mighty river came through and scooped it out. Laura Crossey/University of New Mexico hide caption

"Erosion takes away material, and so geologists are left without the rock record," he explains, "without the physical evidence of the carving. What you are left with is a landscape, a land form."

Scientists have started using sophisticated new techniques that can reconstruct the history of erosion by analyzing the chemistry of one of the minerals in canyon rocks. And in 2012, a research team used those techniques to make the controversial claim that the Grand Canyon was actually cut about 70 million years ago — in the Late Cretaceous. Experts like Karlstrom were startled.

How Old Is the Grand Canyon?

Not everyone thinks the latest findings will be the last word. Brian Wernicke, a geologist at the California Institute of Technology, is in the camp that leans toward a more ancient Grand Canyon, and doesn't buy all of the arguments of Karlstrom and his colleagues.

Solving The Riddle Of The Grand Canyon's Formation

But to him, the important thing is that this report shows a real shift in thinking. The monolithic view of a young canyon no longer dominates, Wernicke says. "That's not the discussion right now. We've all learned that it's a lot more complicated than that."

Wernicke says he expects that over the next year, there will be more data and more debate.

And all of this is exciting for a scientist, Karlstrom says. "It's spectacular. If you're willing to change your mind based on evidence, it's great fun."

Now when he takes river trips through the canyon, he says, he sees everything with new eyes.