Accessibility links
The Middle Class Took Off 100 Years Ago ... Thanks To Henry Ford? In January 1914, Henry Ford started paying his auto workers a remarkable $5 a day. Doubling the average wage helped ensure a stable workforce and likely boosted sales since the workers could now afford to buy the cars they were making. It laid the foundation for an economy driven by consumer demand. 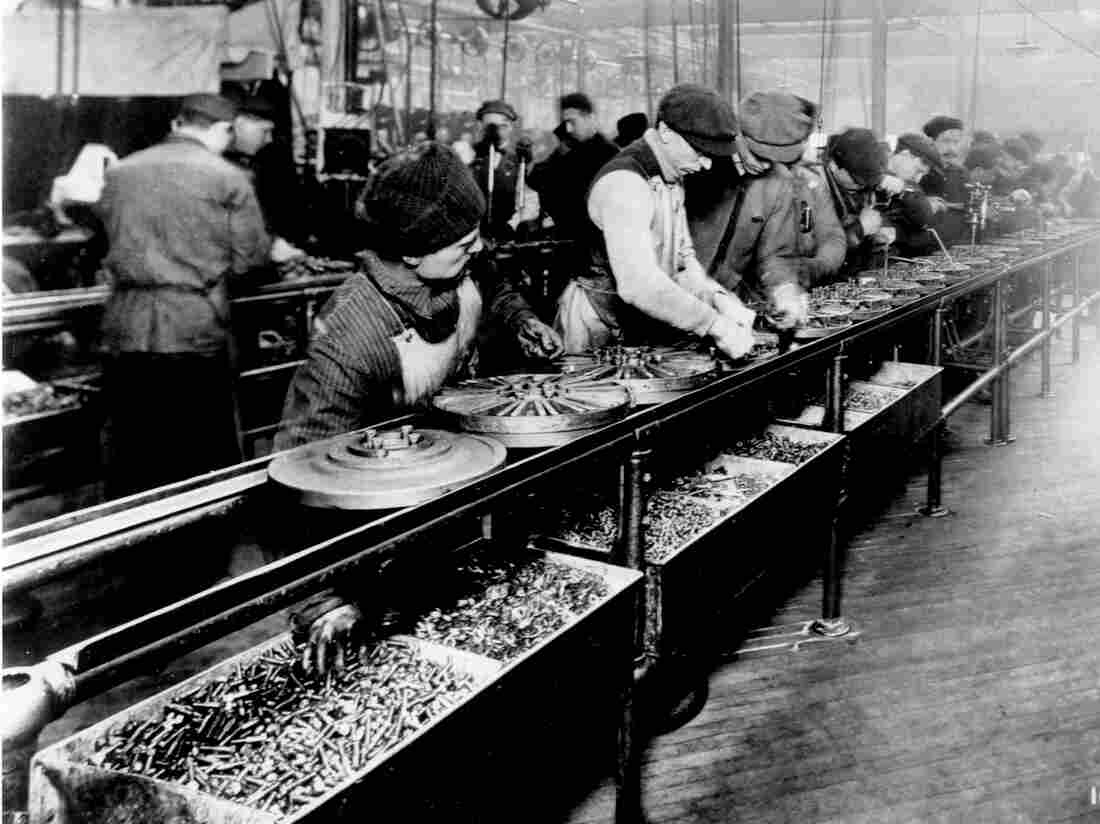 Ford's use of a moving line reduced a car's assembly time from 12 hours to 93 minutes, but this made the work repetitive for workers like the ones here, who are making flywheels. So Ford paid workers $5 a day, an extraordinary amount at the time. AP hide caption 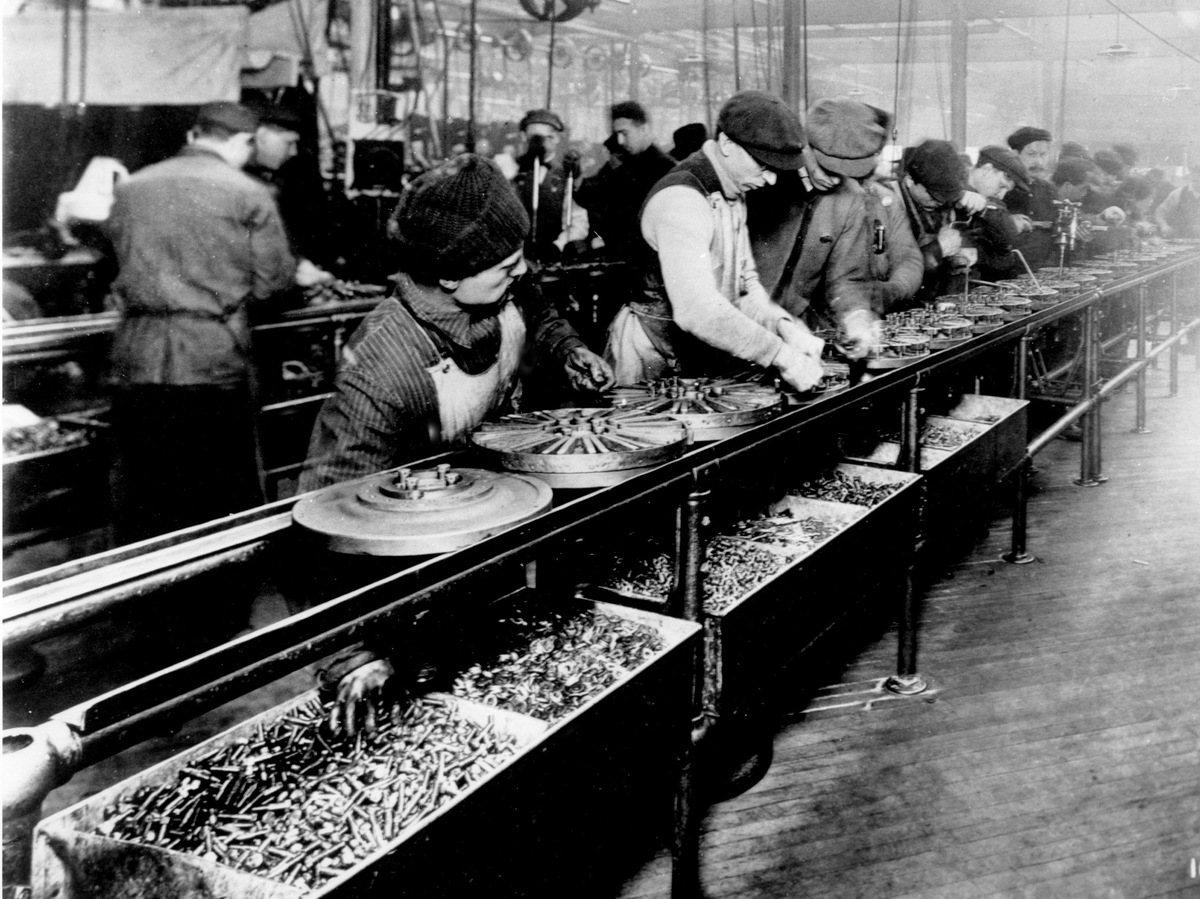 Ford's use of a moving line reduced a car's assembly time from 12 hours to 93 minutes, but this made the work repetitive for workers like the ones here, who are making flywheels. So Ford paid workers $5 a day, an extraordinary amount at the time.

The home of the Ford Model T is now an abandoned factory complex along busy Woodward Avenue in Highland Park, Mich., and there's not much to distinguish this place from Detroit's other industrial ruins.

But if you stop and walk up to the front of the building, you'll find a historical marker telling us that by 1925, this place churned out more than 9,000 Ford Model T's a day.

And it ends with this: "Mass production soon moved from here to all phases of American industry, and set a pattern of abundance for 20th century living."

January 1914 was a frigid month in Detroit — much like January 2014 has been, but nonetheless thousands lined up in the bitter cold outside to take Henry Ford up on an extraordinary offer: $5 a day, for eight hours of work in a bustling factory.

That was more than double the average factory wage at that time, and for U.S. workers it was one of the defining moments of the 20th century. Five dollars in 1914 translates to roughly $120 in today's money. While many economists say today's employers could take some pointers from Ford, they also say 2014 is a totally different world for U.S. businesses and workers.

Henry Ford was a hard-nosed businessman; he didn't introduce the $5 workday because he was a nice guy, says Bob Kreipke, corporate historian for the Ford Motor Co.

"It was mainly to stabilize the workforce. And it sure did," Kreipke says. "And raised the bar all over the world."

He says to understand why Ford thought this was a smart move in January 1914, you have to go back to another huge shift that happened a few months earlier: By 1913, Model T production totaled 200,000 — a feat made possible by the creation of the first moving assembly line. Conveyor belts transported small parts to workers, each of whom performed a specific task.

This tremendously sped up production, but Ford still had a problem: While he had standardized production, he hadn't standardized his workforce. Now, he didn't need particularly skilled workers; he just needed ones who would do the same repetitive, specialized tasks hour after hour, day after day.

Kreipke says there was chronic absenteeism and lots of worker turnover. So Ford gambled that higher wages would attract better, more reliable workers.

"It was an absolute, total success," Kreipke says. "In fact, it was better than anybody had even thought."

The benefits were almost immediate. Productivity surged, and the Ford Motor Co. doubled its profits in less than two years. Ford ended up calling it the best cost-cutting move he ever made.

It's widely believed that Henry Ford also upped wages to expand his market — paying employees enough to buy the cars they made. While that wasn't Ford's main motivation, it was a welcome byproduct, and a game changer, says University of California, Berkeley, labor economist Harley Shaiken.

"What that gave us was an industrial middle class, and an economy that was driven by consumer demand," Shaiken says. 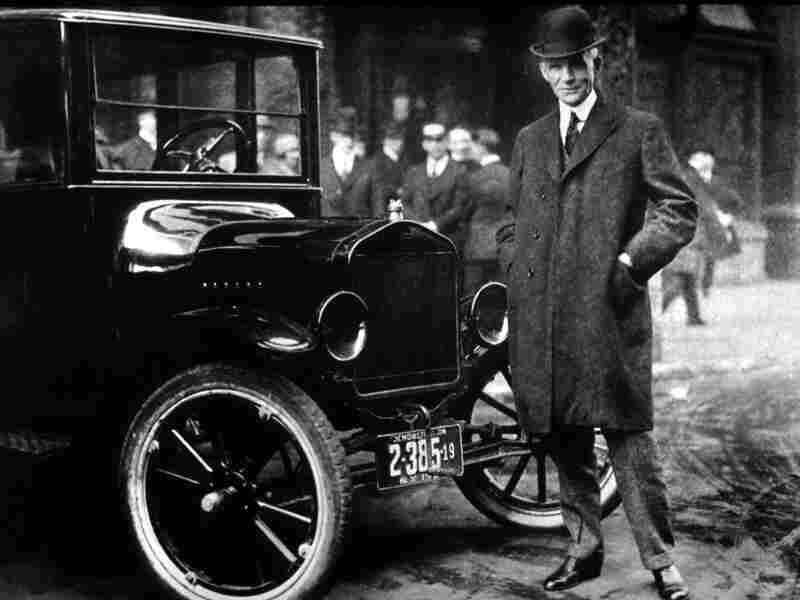 Henry Ford may have paid his workers a good wage, but it wasn't out of charity — it was a good business decision that some say helped the middle class take off. Getty Images hide caption 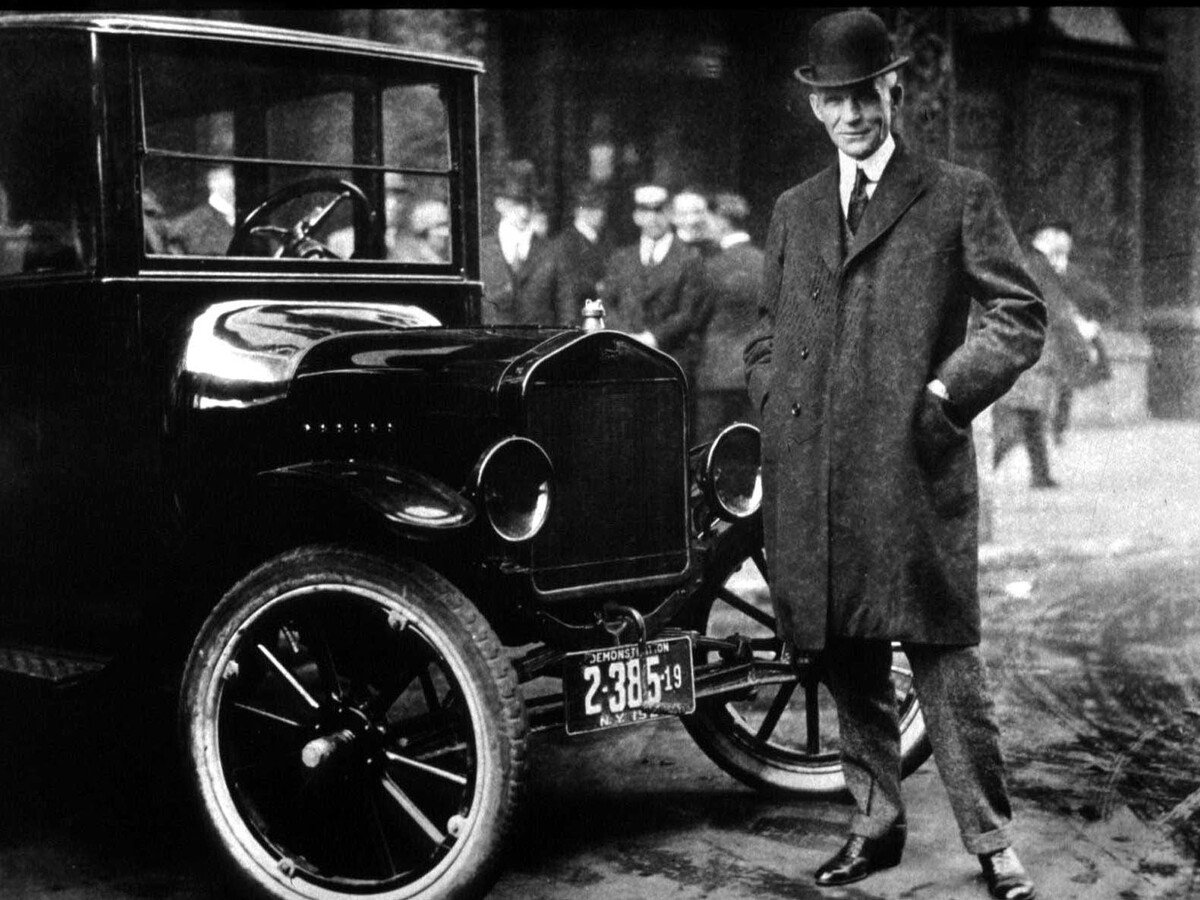 Henry Ford may have paid his workers a good wage, but it wasn't out of charity — it was a good business decision that some say helped the middle class take off.

He says Ford proved that higher wages led to more productivity, which in turn was good for business. That positive feedback loop gave rise to a broad, prosperous middle class. But over the years, waves of economic pressures and political changes have broken that link.

These days, global supply chains feed a hypercompetitive auto industry where no one wants to give up even an inch of ground, and keeping up with technology takes precedent over stabilizing the workforce. This just isn't Henry Ford's economy anymore, Shaiken says.

"There are very real economic pressures out there that push down on wages," he says. "So it's not a simple story, but that doesn't mean that there isn't a core truth into what Ford found."

So a century after Henry Ford started paying $5 a day, it's not at all clear that today's employers and workers can reach a similar bargain and reboot a 21st century version of the working middle class.