Accessibility links
Political Rivals Find Common Ground Over Common Core Tea Party conservatives and some liberals agree on key criticisms as the new education standards roll out in 45 states: that they're a one-size-fits-all approach, create a de facto national curriculum, put too much emphasis on standardized tests and undermine teacher autonomy. 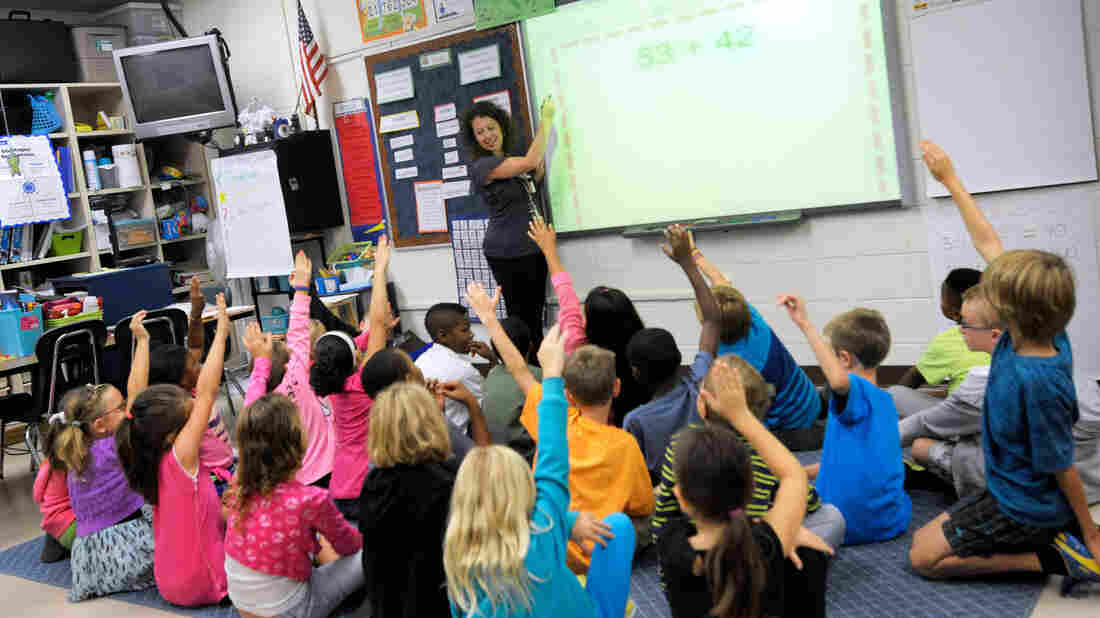 Silver Lake Elementary School in Middletown, Del., has begun implementing the national Common Core State Standards for academics. The GOP largely backs the standards that are rolling out in 45 states, but Tea Party conservatives have been critical — and liberals increasingly have the same complaints. Steve Ruark/AP hide caption 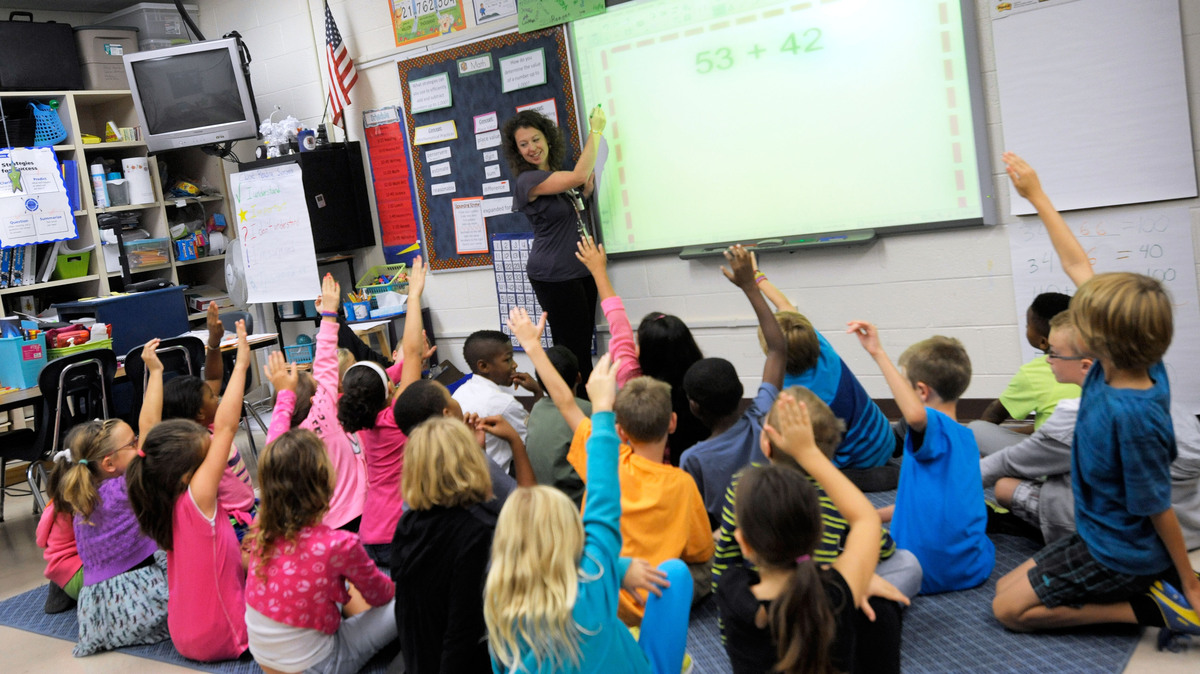 Silver Lake Elementary School in Middletown, Del., has begun implementing the national Common Core State Standards for academics. The GOP largely backs the standards that are rolling out in 45 states, but Tea Party conservatives have been critical — and liberals increasingly have the same complaints.

Supporters of the new Common Core education standards adopted by 45 states say the standards hold American students to much higher expectations, and move curriculum away from a bubble-test culture that encourages test preparation over deeper learning.

But there's growing backlash to Common Core, and conservatives and liberals increasingly are voicing similar concerns: that the standards take a one-size-fits-all approach, create a de facto national curriculum, put too much emphasis on standardized tests and undermine teacher autonomy.

The mainstream business wing of the Republican Party strongly backs Common Core, arguing that raising standards is vital to creating the next-generation American workforce. But in an echo of the rifts in the GOP nationally, the Tea Party branch has been critical of the new standards.

Conservative broadcaster Glenn Beck has often led the push. On his show The Blaze, he often charges that Common Core will undermine student individuality and teacher autonomy, and that it marks a dangerous takeover of local control by federal bureaucrats pushing a leftist agenda.

From the conservative side, there is an understanding of the dangerousness of standardization. And from sort of a libertarian perspective, there's suspicion of government control of what students learn that really resonates with me as a teacher who wants some autonomy.

"This is a progressive bonanza, and if it's allowed to be in our schools in any form and become the Common Core of America's next generation, it will destroy America and the system of freedom as we know it," Beck told his audience last year.

A small but growing number of liberal reformists have joined conservatives, agreeing on some of the key criticisms.

"It's fundamentally flawed because it was fundamentally undemocratic in the way that it was defined, rolled out, financed," says Stan Karp, a former high school teacher now with New Jersey's Education Law Center and the liberal reform group Rethinking Schools. He sees Common Core as the ideological stepchild of President Bush's No Child Left Behind Act: another high-stakes testing program, he says, imposed from Washington with big help from wealthy foundations and little help from teachers, parents and local communities.

The mutual criticism of Common Core extends to potential uses and abuses of data collection under the new standards. Both sides also say Common Core represents an end-run around federal prohibition against a national curriculum. And both argue that the new standards were not really state-driven. They say the Obama administration all but forced states into it by requiring adoption of the new standards in order to be eligible for more than $4 billion in federal "Race to the Top" grant money.

"From the conservative side, there is an understanding of the dangerousness of standardization. And from sort of a libertarian perspective, there's suspicion of government control of what students learn that really resonates with me as a teacher who wants some autonomy," Cody says. "I don't want to be so tied to filling their heads with this predetermined list of things."

Worries about Common Core's content and accompanying tests also cross ideological lines. In one example, Cody points to Common Core's idea of emphasizing "close reading" of literature and nonfiction. Students will be given short passages of text to try to uncover "layers of meaning" and to encourage "deep comprehension." That sounds better than the bubble test world of No Child Left Behind. But Cody worries that it will stifle free-flowing discussion by pushing teachers to prep kids for tests.

"These standards were built to be tested. ... I want to have some autonomy as a teacher to do open-ended investigations, to explore things [the students] are curious about," he says. "And the more tightly this is tied to a predetermined list of outcomes and testing, the harder it is for me to do that as a creative teacher."

Advocates of Common Core reject the notion that it creates a national curriculum. They point out that teachers can pick their own materials as long as students know what the standards ask them to know by the end of the school year. Common Core, they argue, will do a lot to promote critical thinking and collaborative problem-solving while significantly raising the bar on what every student should know.

"I would encourage your listeners to take a hard look at the standards before they start believing some of the critics," says Dane Linn, vice president for education and workforce at the Business Roundtable. With the U.S. Chamber of Commerce, the Business Roundtable is rolling out a new national ad campaign to support Common Core.

Linn worked on Common Core when he directed the education policy arm of the National Governors Association and says the idea that it's a stalking horse for federal intrusion into local education is ludicrous.

"I was at that first meeting in Chicago with the state's governor's offices, state superintendents of schools, members of state boards of education. It was a state decision," Linn says. "Clearly, some of those critics of the standards have chosen to base their arguments on fallacies about both the development of the standards and the intention of the standards."

Meantime, many parents and teachers feel caught in the middle as they work to train up on and implement the new standards. Megan Franke, an education professor at UCLA, says her big worry is "that we're not going to support people and then we're going to say, 'See, the Common Core doesn't work.' "

And Education Secretary Arne Duncan has taken political heat and criticism, first for dismissing Common Core critics as fringe and then for suggesting the backlash was largely from embittered "white suburban moms."

It all goes to show that at the very least, the standards have a serious image problem. Tea Party conservatives, calling it "Obamacore," are planning a big march on Washington this summer to oppose the new standards.

But the growing number of liberal critics of Common Core aren't likely to join hands with them and march. They fundamentally disagree about how to reform public education and are alienated by marchers' other calls to abolish teacher tenure and the federal Education Department.