Accessibility links
In Israeli Prison, An Elaborate Theater Of Interrogation Palestinian Ala'a Miqbel thought he was going for a brief interview with Israeli security for a permit for work travel to the West Bank. Instead, he was arrested and taken to prison. There, he met Palestinian informants known as "sparrows," who masquerade as fellow prisoners and elicit information for the Israelis. 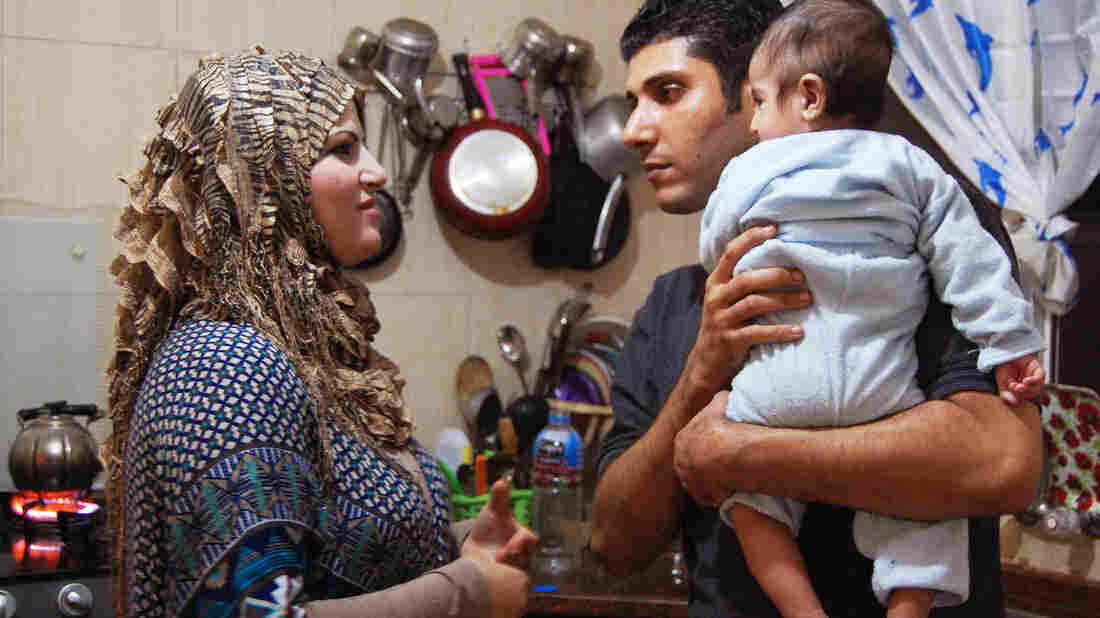 Ala'a Miqbel (shown here with his wife and their youngest son in their Gaza City apartment) was held for nearly four weeks in an Israeli prison, then released without charges. There, he met the "sparrows" — Palestinians who appear to be fellow prisoners but are actually gathering information for the Israelis. Emily Harris/NPR hide caption 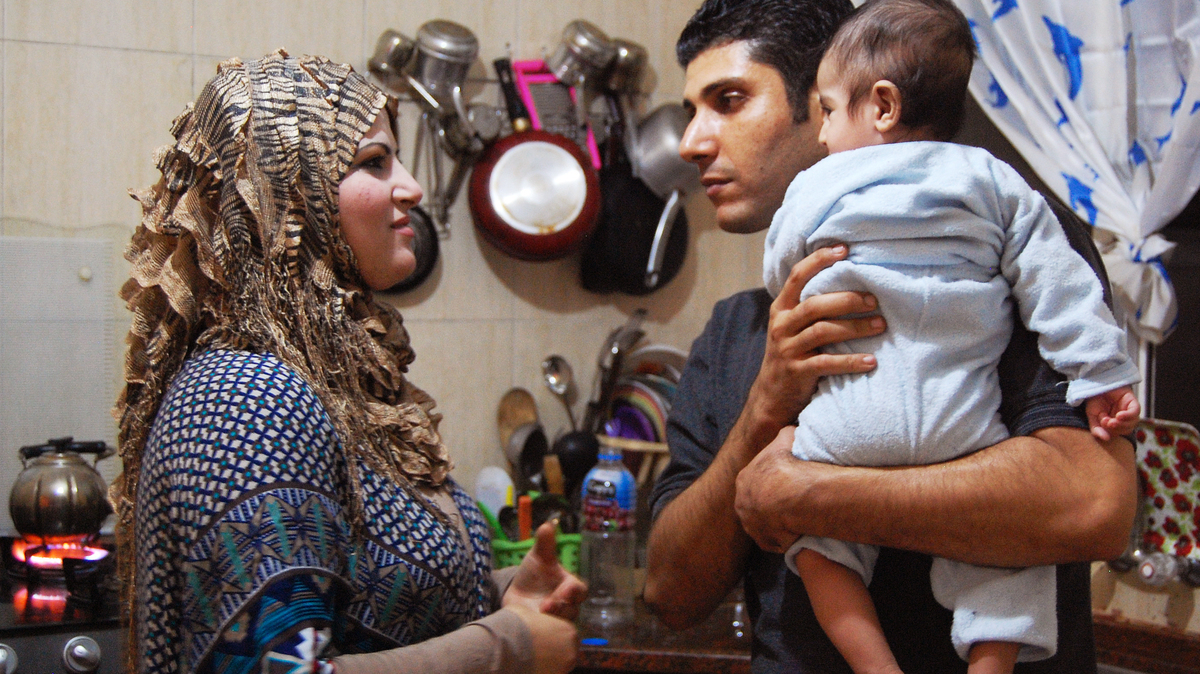 Ala'a Miqbel (shown here with his wife and their youngest son in their Gaza City apartment) was held for nearly four weeks in an Israeli prison, then released without charges. There, he met the "sparrows" — Palestinians who appear to be fellow prisoners but are actually gathering information for the Israelis.

Ala'a Miqbel phoned his wife and his boss on the morning of Aug. 26 last year, just to say he was almost at the Erez crossing. That's the checkpoint between the Gaza Strip, where Miqbel lives, and Israel.

The U.S. Consulate had invited Miqbel to attend a conference in the West Bank. Although he'd been to Ramallah for work several years ago, Israeli security wanted to interview him before granting a travel permit this time.

Before the day was over, Miqbel would be in Israeli prison. Before he was free a month later, with no charges filed, he would be fooled by an Israeli interrogation technique that's a cross between Big Brother and Shakespeare.

The first clue that something was going wrong during that August morning interview was the down-to-his-underwear search. Miqbel said he refused at first, telling the Israeli soldier with him he'd already been electronically searched.

But the soldier said it was normal. So Miqbel stripped.

But they wanted more. Miqbel was soon accused of having ties to a militant group, Islamic Jihad. An Israeli intelligence officer said another Palestinian had said Miqbel was a member. He was accused of shooting at Israeli forces and collecting funds for Islamic Jihad. Miqbel said none of it was true. But at the end of the day he was handcuffed, blindfolded, and taken to prison.

The prisoner is absolutely helpless, and he thinks that the interrogation is over. He can't guess or know that this is [part] of the whole interrogation process.

"It was an enormous shock," Miqbel says. "I thought I'd be gone half an hour. Now I didn't know when I'd be back. I thought of my kids, my wife, my parents, my future."

This was the first time Miqbel had been arrested, but lawyers and human rights organizations say what he experienced, both in the interview and the weeks in prison, was actually pretty standard. He was taken to a prison inside Israel, where a doctor weighed him. He was issued orange clothing and left alone in a small, dirty cell.

For the next several days, the only people he saw were Israeli interrogators. The routine became familiar.

"In interrogation, there is a chair so low it breaks your back," Miqbel says. "They cuff your hands to it. Your feet are cuffed so it's very painful. And the chair is on a jack, so the interrogator can jerk you back and forth."

An air conditioner blowing freezing air on him made things worse. Miqbel says he couldn't shower or brush his teeth, and apart from apples and cucumbers, he found the food inedible.

After four or five days — he lost track of time — someone joined Miqbel in his cell. This man seemed to be another Palestinian prisoner, and he gave Miqbel a tip. After the Israelis take your DNA sample and fingerprints, the other man said, they'll release you from interrogation and put you in a regular cell with other regular Palestinian prisoners.

Things unfolded just as the man said. When he reached this new cell, Miqbel was so happy, he cried.

"I couldn't believe it," he says. "I was in normal prison. The guys welcomed me, they brought me new clothes, I took a shower. They gave me coffee and a pack of cigarettes. When it was time we prayed together." 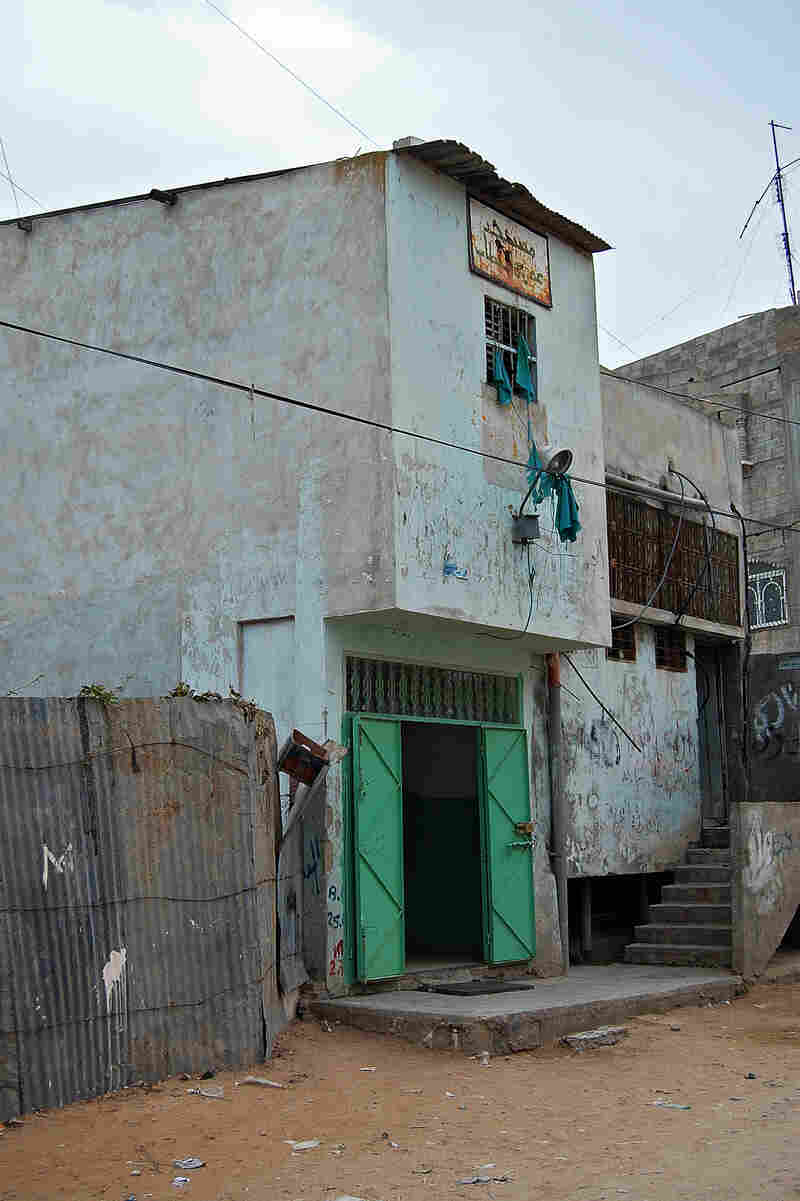 This is the mosque closest to Miqbel's Gaza City home, where he has prayed. It's associated with Islamic Jihad, a militant group. Israeli security accused him of having ties to Islamic Jihad, which he denies. Emily Harris/NPR hide caption 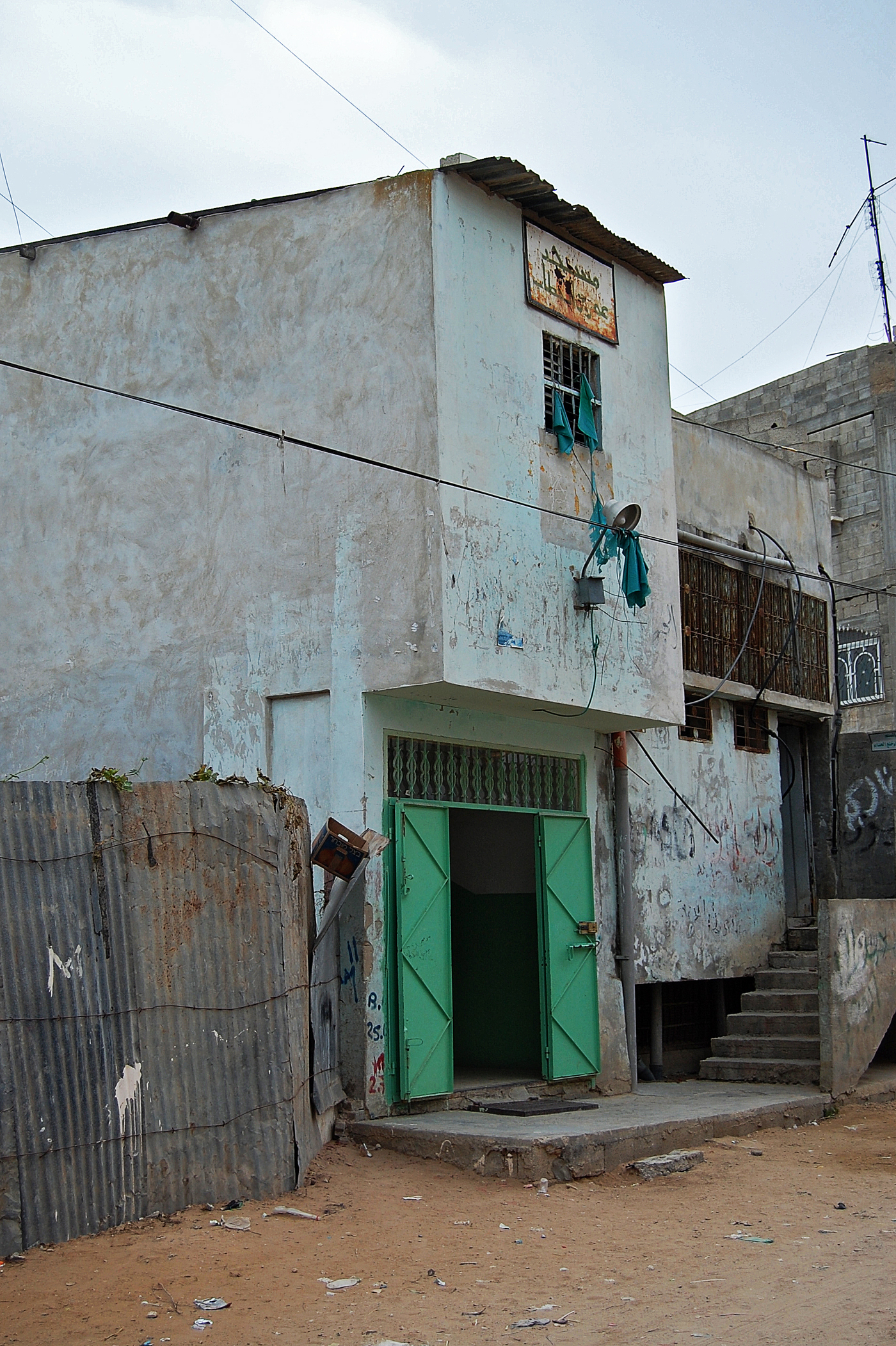 This is the mosque closest to Miqbel's Gaza City home, where he has prayed. It's associated with Islamic Jihad, a militant group. Israeli security accused him of having ties to Islamic Jihad, which he denies.

They also warned him not to talk about his situation to anyone but the room leader, the head of the security committee among the prisoners. That was an older man named Abu Bahar. Miqbel knew that Palestinian prisoners were well-organized. Abu Bahar told him the Palestinian factions in the prison needed to do their own background check on Miqbel, and asked him to write down everything he'd done. He won Miqbel's trust because he knew mutual acquaintances and stories from Miqbel's past. Abu Bahar questioned Miqbel twice, focusing on militant activity.

"He asked me: Didn't you do any activity against Israel in the 2008 war?" Miqbel says. "I told him no, I was home with my new wife, who was just pregnant. He asked so many questions, like where do the militants launch rockets. I said how am I supposed to know."

Miqbel was being fooled. Abu Bahar and all the people in that cell were collaborating with Israeli intelligence. Miqbel learned this two days later, when he was summoned by an Israeli intelligence officer, who repeated every detail Miqbel had shared with Abu Bahar. When Miqbel finally met a lawyer after 10 days in prison, he learned that these fake cells are a routine part of the Israeli intelligence system and the fake prisoners are called al-asafeer — Arabic for "the sparrows."

"The prisoner is absolutely helpless, and he thinks that the interrogation is over," she says. "He can't guess or know that this is [part] of the whole interrogation process."

She says the "sparrows" give prisoners different rationales to get information, sometimes encouraging boasting by trading stories, sometimes promising to alert people on the outside who might be associated with the prisoner, sometimes even suggesting the prisoner might be a collaborator and asking for proof of his loyalty to the Palestinian struggle against Israel.

Informants have long been part of the fabric of the Israeli-Palestinian conflict. Motives vary, and can include material rewards or personal revenge. Israeli agents often recruit informants who need something from Israel — health care, for example, or travel permits.

This history has built a well of suspicion among Palestinians, which makes the background checks of new prisoners by other locked-up Palestinians important. Lawyer Ben-Natan says the elaborate sparrows system of fake prisoners in fake cells takes advantage of this, as well as capitalizing on the loneliness and despair many people experience after a few days of solitary confinement and interrogation.

But Israeli security officials view it as just a variation of "good cop, bad cop" — a questioning technique used all over the world. Former Israeli Col. Yonathan Fighel says it's just one more way to gather information.

He makes a distinction between what Israel would need the information for: whether to present at trial or just add to the intel files. Information gathered by the sparrows can be used in court, lawyers say, but it's better to have confessions written by a prisoner or told directly to an Israeli officer.

In the end, Ala'a Miqbel told his sparrows that he had had coffee with a neighbor who was part of Islamic Jihad and that he'd played on a soccer team associated with the group. He was released without charges after almost four weeks in prison.

Israeli security sources would not confirm anything Miqbel says happened in prison. They say he was released when they were finished interviewing him.