Accessibility links
As States Close Prisons And Cut Crime, Feds Lag Behind Federal prisons are chronically overcrowded after years of "tough on crime" policies. But a new report finds that a majority of states cut their imprisonment rates and saved millions — while keeping crime down. 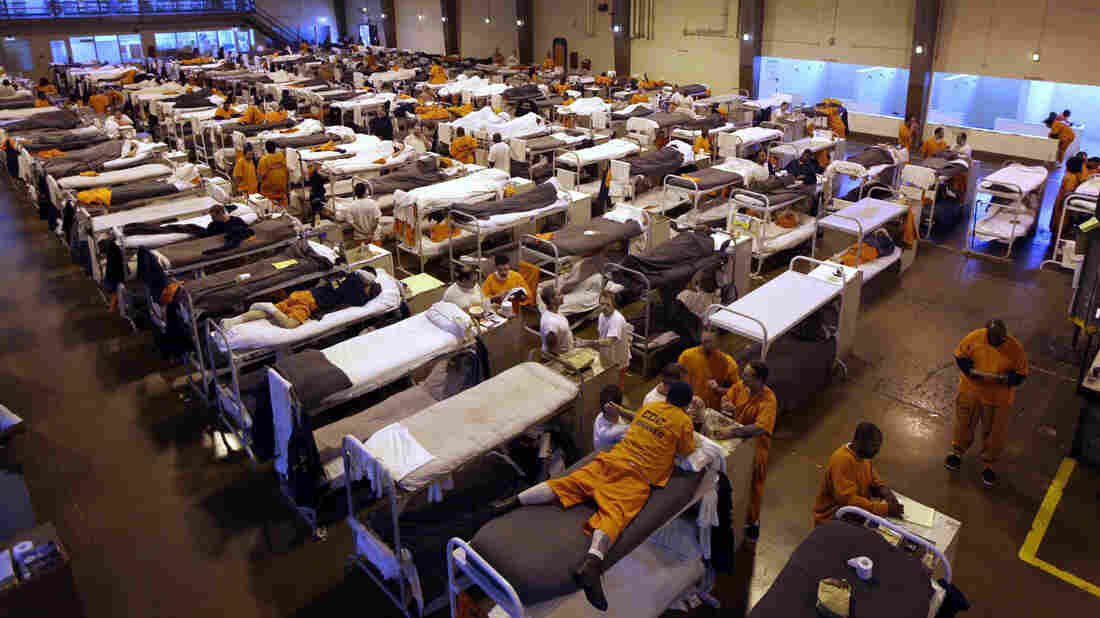 When state prison populations were at their peak, prisons like San Quentin in California used gymnasiums to house inmates in bunks. Now it's the federal prison system that's overcrowded. The Bureau of Prisons says it's 35 to 40 percent over capacity. Eric Risberg/AP hide caption 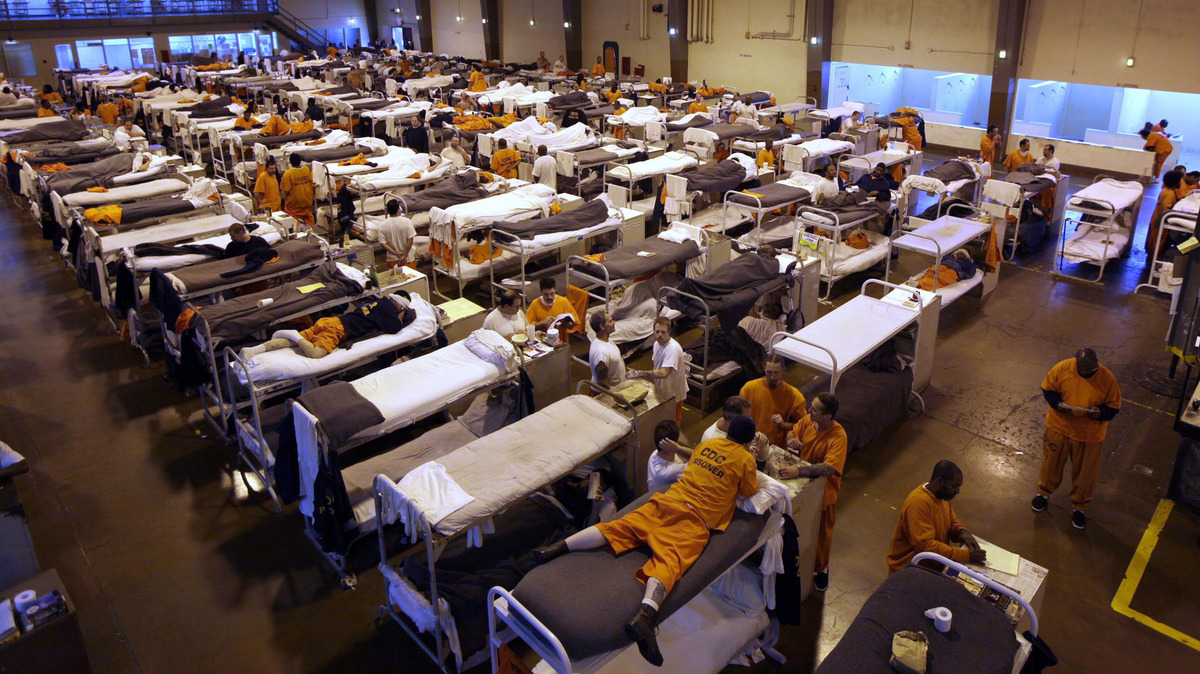 When state prison populations were at their peak, prisons like San Quentin in California used gymnasiums to house inmates in bunks. Now it's the federal prison system that's overcrowded. The Bureau of Prisons says it's 35 to 40 percent over capacity.

State prison populations are declining for the first time in four decades. But at the federal level, incarceration rates are going in the opposite direction.

The federal Bureau of Prisons is on track to swallow a third of the Justice Department's budget by 2020, according to a report by the nonpartisan Urban Institute.

"That is at great expense to other fiscal priorities," says Nancy La Vigne, director of the Urban Institute's Justice Policy Center. "That affects the DEA, the FBI, grants to states and localities for policing, for crime prevention and for reducing gang violence."

The federal prison population has grown eightfold since 1980. It costs more than $6 billion a year to house more than 200,000 inmates in increasingly overcrowded facilities. With little money or space for rehabilitation programs, more than half of those inmates will return to prison after getting released, according to federal studies.

To understand how it got to this point, you have to go back to the fall of 1988. Crime was at historic highs. George Bush was battling it out with Michael Dukakis for the presidency. Bush's team aired what has become known as the "Willie Horton ad."

The ad explains how Horton, a convicted murderer, was given a weekend furlough pass from prison in Massachusetts under Dukakis' watch. He fled, and raped and murdered a woman.

[W]hat we're seeing in state after state is states actually ratcheting back their prison populations and having significant drops in crime.

The prison population went up. The crime rate went down.

Experts point to the fact that a lot of violent offenders were locked up — but also that the crack wars ended, drug markets stabilized and police departments ushered in data-driven and community-oriented policing.

Now crime is at historic lows — and all those prisons are costing a fortune.

"There's been this assumption that if you wanted to reduce crime, you had to lock up more and more people," says Adam Gelb, the director of the public safety performance project for the Pew Charitable Trusts. "But what we're seeing in state after state is states actually ratcheting back their prison populations and having significant drops in crime."

In recent years, 29 states have turned to programs like drug treatment, ankle bracelets and supervised probation for low-level offenders.

"It appears that we have passed the point of diminishing returns, to where more and more, prisons are not effective at reducing crime — at least not anywhere near as effective as lots of other strategies that cost a whole heck of a lot less than prison cells," Gelb says.

He says money is critical here because states have to balance their budgets. The federal government, for the most part, does not.

"People are sick and tired of this revolving door," Gelb says. "They say, 'We've tried this experiment. We've tripled, quadrupled our prison population, and yet we still are seeing these people coming back and back, over and over again. There's got to be a better way.' "

Just 3 percent of the 200,000 federal inmates are incarcerated for murder, assault or kidnapping. Half of the inmates, however, are there for drug crimes.

For the first time in decades, lawmakers on Capitol Hill are looking at bills that could reduce prison sentences and drug penalties for nonviolent crimes. On Thursday, the Senate Judiciary Committee passed a bill that would lower mandatory minimum sentences for some drug offenses and give judges more discretion. The bill now heads to the Senate floor to see if there is enough support to make it law.

As debate on the bill begins, Congress might want to borrow the notes of state lawmakers.