Accessibility links
Celebration Is In The Air. Or Is That Just Snow? Patty Chang Anker recommends a cookbook that eases the anxieties of anyone trying to cook Chinese-American meals, and Lev Grossman reminds us that there is a Seussian storm comparable to the one that shut down Atlanta this week. 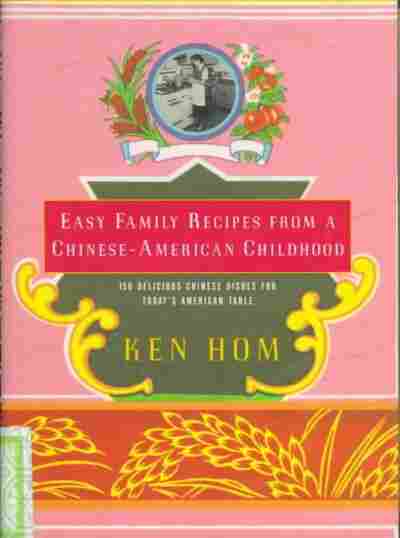 Jan. 31 brings the beginning of the Year of the Horse, and while concerns about air pollution have led to fewer celebratory fireworks than usual in China, Patty Chang Anker says that for her, there is no shortage of traditional food. Anker recommends a cookbook that eases the anxieties of anyone trying to cook Chinese-American meals.

But Lev Grossman points out that there's no celebrating in Atlanta as everyone tries to figure out whom to blame for the winter storm that dumped enough snow to stop the whole city. Grossman reminds us of a comparable literary storm imagined by everyone's favorite Doctor.

Easy Family Recipes From A Chinese-American Childhood, By Ken Hom

Chinese New Year season is here, and that means food. Traditional dishes like noodles for longevity or a steamed whole fish for wealth might make a diner's mouth water but cause a Chinese-American home cook (like me) to panic.

Many first-generation Americans will understand. We know a good authentic meal from the home country when we taste it, but how on earth do we make it? Most of our parents never write any recipes down!

Fear not: in Ken Hom's Easy Family Recipes from a Chinese-American Childhood lie salvation and liberation. Hom, a renowned chef who has cooked for prime ministers, presidents and a sultan, popularized Chinese cooking worldwide through his BBC-TV shows and cookbooks. That may sound intimidating, but his humble beginnings — he was raised in Chicago cooking in his uncle's restaurant from age 11 — make him a likeable and approachable guide.

Hom's memories of Chicago's Chinatown in the 1950s are so lively you can almost smell the spices coming off his neighbor, "Roast Pig Lei" and see the bacon draped across the bathroom of the relative who cured meat in his apartment. "Poor as we were, I never experienced a sense of deprivation," he writes. "My mother's skill in the kitchen provided more than physical sustenance."

Hom's "Chinese Larder" section demystifies Chinese ingredients we've all eaten not knowing what they were. Mung bean noodles? Who knew?

If you've ever wondered about "authentic" versus "American" Chinese food, Hom explains some differences. For example, his Authentic Lemon Chicken is velveted (coated in egg white), where in his American recipe it's battered and fried. And his Chinese dishes are often simpler — the American version of Egg Foo Young has 25 ingredients, the Chinese version, only nine.

And perhaps most liberating for hyphenated-Americans: Hom celebrates hybrid dishes (Thanksgiving turkey with sweet rice stuffing, stir-fry with American broccoli or peas), encouraging us to experiment.

"Nothing is written in stone. We adapted to America. You add your own adaptations. That's what American cooking is all about."

Patty Chang Anker is the author of Some Nerve: Lessons Learned While Becoming Brave. 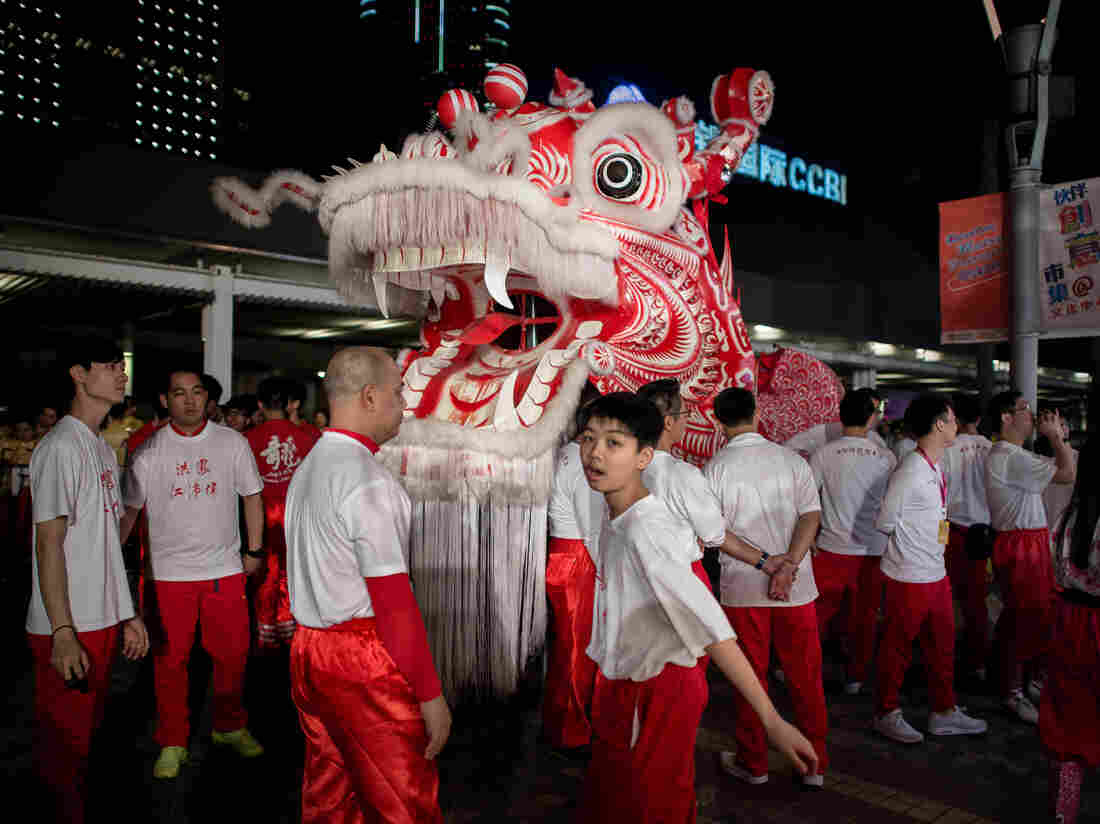 Performers get ready before the start of a Chinese New Year parade in Hong Kong on Jan. 31. Philippe Lopez/AFP/Getty Images hide caption 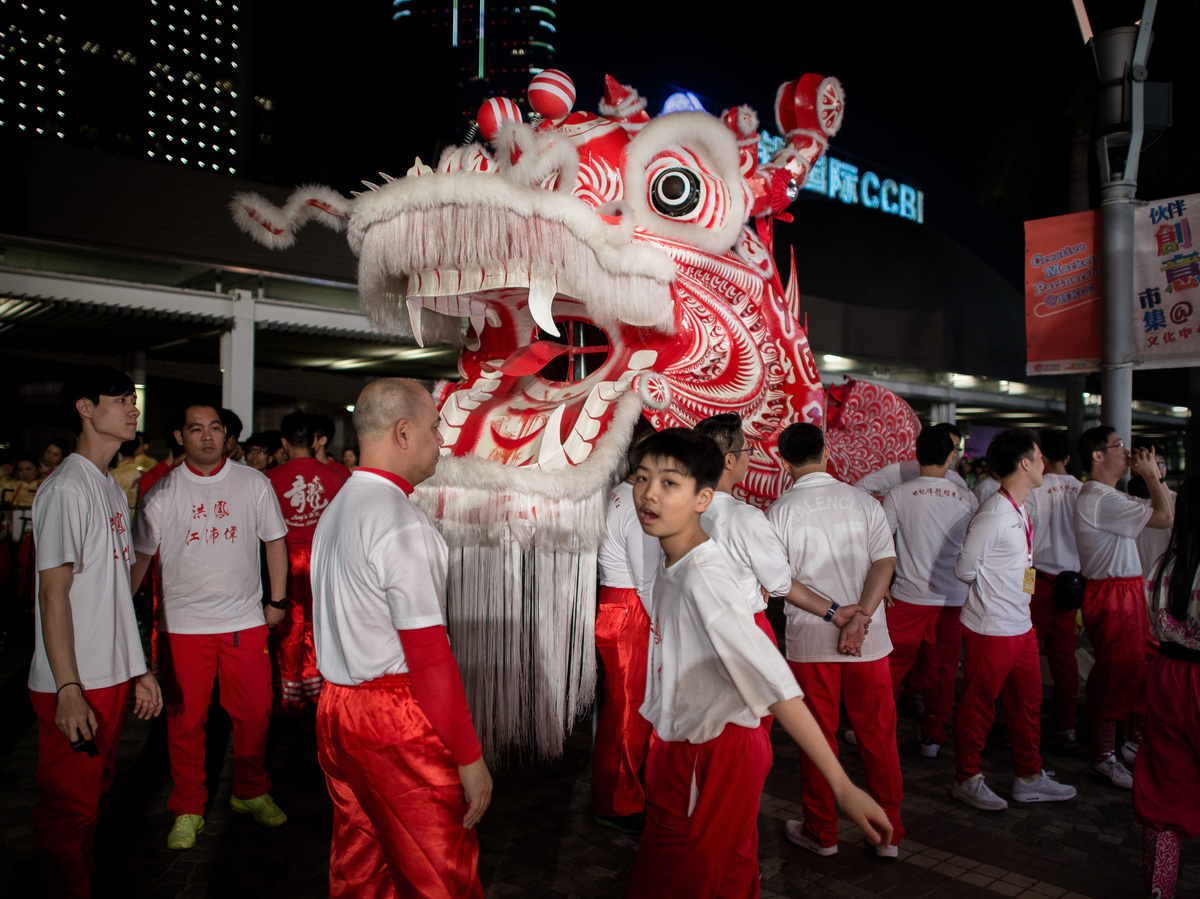 Performers get ready before the start of a Chinese New Year parade in Hong Kong on Jan. 31. 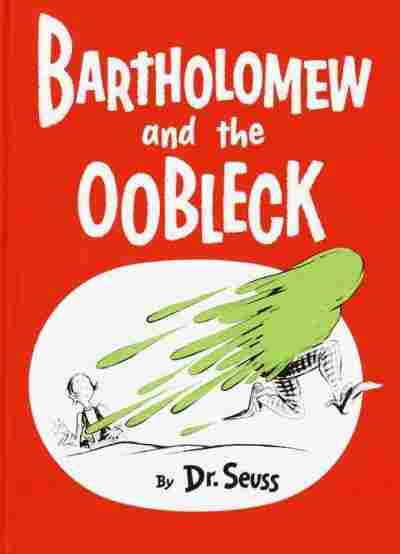 Bartholomew and the Oobleck

Bartholomew And The Oobleck By Dr. Seuss

Personally, being from New England, I experience a little schadenfreude when other regions get hit with some of the wintry misery I grew up on. But it also makes me think of a work of literature which is to unexpected precipitation what Proust is to tea-soaked pastry. I speak, of course, of Bartholomew and the Oobleck, by Dr. Seuss.

It's inevitably overshadowed by its more famous predecessor, The 500 Hats of Bartholomew Cubbins, but Bartholomew and the Oobleck has a power and a pathos all its own. It's set in the Kingdom of Didd, where King Derwin has grown bored with the available weather options: "This snow!" he says, "This fog! This sunshine! This rain! BAHH!" He wants something new.

So, as one does, he summons his magicians, who offer to call down from the sky something called oobleck:

We just can't tell you anymore.

We've never made oobleck before.

Oobleck turns out to be a kind of nasty, sticky green goo. It gums up the bell in the bell tower, then the birds, the royal trumpet, the goats and geese and cows. The Captain of the Guards eats some and it glues his mouth shut. It comes down in huge torrents that drip through the ceilings and down the chimneys. It's gross.

Never one to lose his head in a crisis, Bartholomew, the king's page, urges everybody to go back to bed, which is always good advice, but nobody listens, and the citizens of Didd end up getting covered in oobleck and stuck to each other and to everything else.

King Derwin gets stuck to his own throne, with oobleck oozing into his royal ears — you imagine him desperately swabbing it out with some royal Q-tips. Bartholomew tells him what he has to do to fix things, which is just to say, "I'm sorry" for gumming everything up.

The king does say "I'm sorry," and when he does, the good doctor tells us, "all the oobleck that was stuck on all the people and on all the animals of the Kingdom of Didd just simply, quietly melted away." You see a happy cat giving a big thumbs up (only in Dr. Seuss do cats get to have thumbs).

Unfortunately in the kingdom of Atlanta nobody can agree on who should apologize for all the snow, and in any case the snow probably wouldn't just obligingly disappear the way the oobleck does. Life isn't always as simple as a Dr. Seuss story. But they might try saying sorry anyway, just in case in it would. It couldn't hurt — and you never know.