Accessibility links
Not My Job: A Dinosaur Expert Gets Quizzed On Barney Paul Sereno is a globe-trotting paleontologist and a professor at the University of Chicago. Since he's an expert on dinosaurs of the past, we'll ask him about a friendly purple dinosaur of the present. 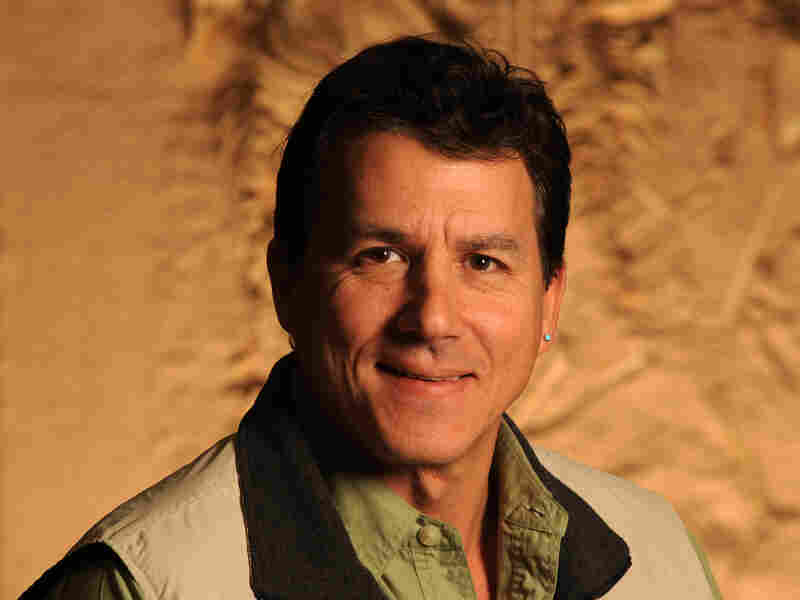 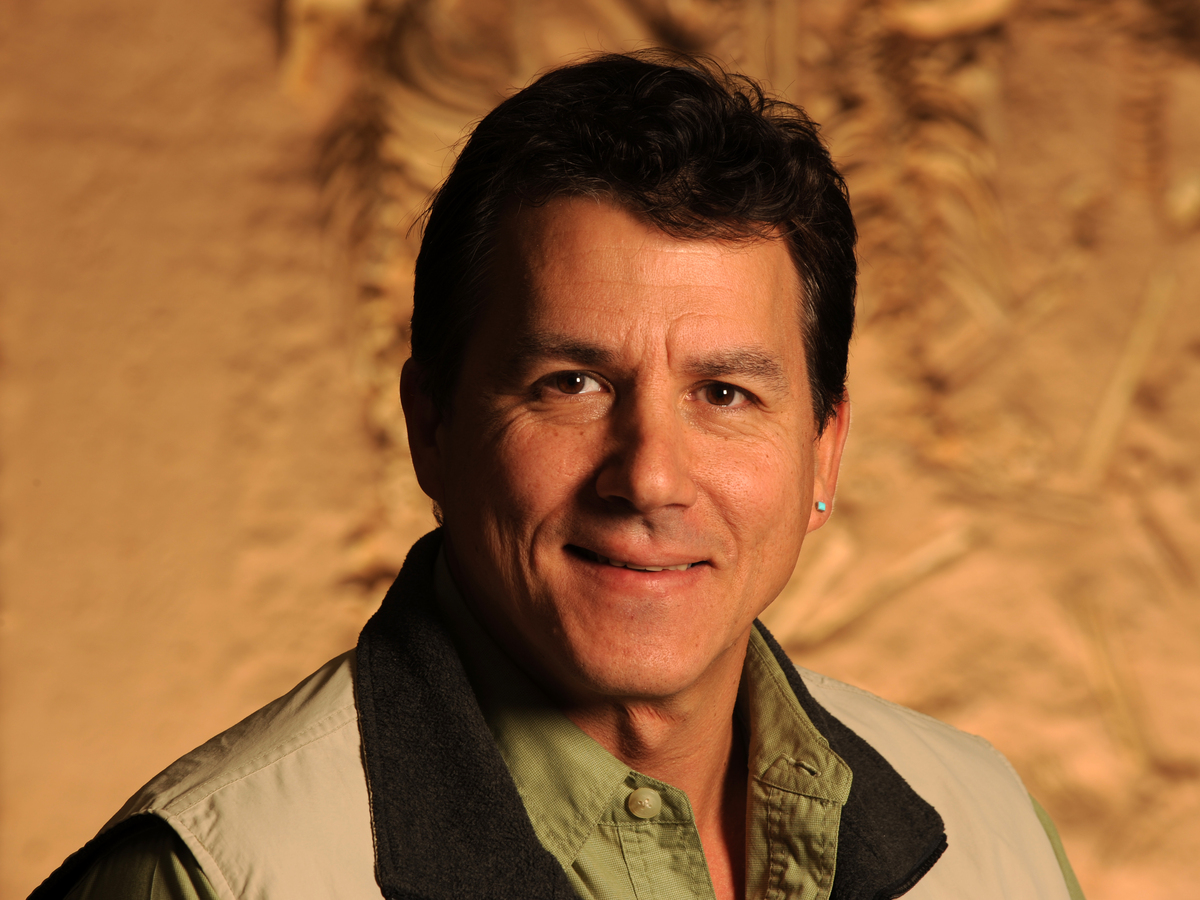 Paleontologist Paul Sereno is a globe-trotting, headline-making explorer. He's a University of Chicago professor who has discovered several new dinosaur species — and he's also been named to People magazine's list of the 50 most beautiful people.

Since he's an expert on the dinosaurs of the past, we're going to ask him about a big, friendly dinosaur of the present. We'll present him with three questions about Barney, the purple dinosaur.

So now the game where we ask smart people about dumb things. It's called Not My Job.

The University of Chicago has a worldwide reputation for having a community of globetrotting headline-making daring explorers who routinely make earthshaking discoveries while being named to People Magazine's list of the 50 Most Beautiful People.

SAGAL: OK, well they have one.

PAUL SERENO: Thank you very much.

MO ROCCA: I'm sorry, were you one of People's Most Beautiful or People's Sexiest? Because that's a different - those are two different lists.

SERENO: The news folks showed up at my office one day and said would you consider this. I said you've got to give me People magazine, I don't, you know, read that.

ROCCA: Oh, they don't just declare you sexy, they say will you accept the honor?

SERENO: I did it if they sent an intelligent writer, and they did.

SERENO: No. They sent a photographer who - and clothes. And you weren't supposed to sweat in the clothes. They were worth, you know, thousands of dollars.

SALIE: Did you - were you nervous? Did you sweat?

SAGAL: Is it true that you decided you wanted to be the world's sexiest something, so you chose paleontologist so that it would be a pretty low bar?

ROCCA: Well, I was - I have to say I actually was in the magazine two years ago but in the list of sexy people with gray hair.

ROCCA: Were you really one of the 50, or were you filler?

SERENO: No, it was very strategic. They had "Jurassic Park" advertisement. They had me on one side, and they had - oh what's his name?

SERENO: They had Indiana Jones...

SERENO: Harrison Ford on the other side.

SERENO: But anyway, they had Lauren Bacall, she was in her 70s. Old people are beautiful. I thought this was a good edition.

TOM BODETT: But they smell funny.

SAGAL: And talk about what you've actually done. The reason that you came to public prominence is that the character of Alan Grant in "Jurassic Park," who you meet at the beginning of the movie, and he's this kind of adventurous paleontologist out there digging up Velociraptors, that is supposedly based, at least in part, on you. They were - the producers of the film, Spielberg, et al., had talked to you and followed you around a little bit. Is this not the case?

SERENO: He might have been inspired by some of the things, especially later, you know, that we discovered. We discovered these weird dinosaurs from Africa, spinosaurs. And but no, I actually had a chance to speak to Steven Spielberg at his - in Chicago here. He won a lifetime achievement award. And it forced me to look at all of his films, and basically he's one of the few that actually portrayed scientists, believe it or not, in a positive light.

We're usually crazy, mad people. But he - and he actually captures sort of some of the...

SERENO: The sexiness of some of the adventure of science. And I think that's good.

SAGAL: So what you're saying is that when Spielberg in his dinosaur films shows scientists running for their lives from reanimated Tyrannosaurus rexes, that's accurate?

SERENO: Sometimes it is. I mean...

SERENO: I've had a few things in the field go very exciting like that, yeah.

SAGAL: So talk to me about - but one of the things is aren't most people supposed to give up their obsession with dinosaurs by the time they turn nine?

ROCCA: Do you live - do you, like, lie down on the living room floor and play with dinosaurs?

ROCCA: And the other was dump trucks.

SAGAL: Wait a minute. Did you say, wait a minute, seven Ph.D. topics?

SERENO: Oh, I was very thorough. By that time I had all these different things I could do, and then there was dinosaurs.

SAGAL: I mean wait a minute. What was your, like, what was your Ph.D. topic, why dinosaurs are cool? Because that's how you talk about it, you know.

SERENO: It was very Indiana Jones-like. I liquidated all my grant money. I had $13,000. I bought a ticket to China. I was the first to get into Outer Mongolia. I went the Trans-Siberian, and I survived. And it was - I shot 500 rolls of film, and a career...

SAGAL: I was hoping enemy agents, Nazis, Arab swordsmen in bazaars. I want to ask, kids love playing with dinosaurs. They want to have a dinosaur. Is there any dinosaur that would actually make a good pet?

SAGAL: But that's not - I mean, you don't really want - I mean you're a little kid. You don't want a little plant-eater. You want one of the big guys. You want like a triceratops, at least.

SERENO: I think that would be quite a load to handle.

SAGAL: But they're herbivores.

SALIE: Yeah, he's talking about a load to handle. They have to go to the bathroom.

SERENO: Well the first "Jurassic Park," I don't know where they got this from, but they ended up - Laura Dern goes up to a pile that looks like a bulldozer, like, dumped, you know, about 15 feet...

SERENO: I don't know where they got that from. But it would be half that bad.

SAGAL: I've got to tell you, you should come with me and visit the bathrooms at NPR headquarters because there are some people...

SAGAL: Let me tell you about Steve Inskeep, high-fiber diet.

SAGAL: Paul Sereno, we were delighted to talk to you. We've invited you here today, though, to play a game that this time we're calling...

CARL KASELL: I love you, you love me. We're a happy family.

SAGAL: So you see this one coming down the tracks, don't you? So you're an expert in the dinosaurs of the past. But what about the big, purple, green, friendly incredibly annoying dinosaurs of the present? We're going to ask you three questions about Barney the Purple Dinosaur...

SAGAL: If you answer two correctly, you'll win our prize for one of our listeners, Carl's voice on their home voicemail. Carl, who is paleontologist Paul Sereno playing for?

SAGAL: Ready to do this?

SERENO: I've done everything to avoid Barney, but yes.

SAGAL: All right, here we go, first question. The first person to play Barney was a young woman who only did it for a short time what happened: A, she landed the lead role in Freaky Friday and Ms. Lindsay Lohan was on her way to fame; B, she snapped, and tried to eat some of the children with her big felt lips, yelling, I'm a carnivore; or C, nobody knows, she just took off the costume one day, dropped it and walked away?

SERENO: I guess I would hazard C.

SAGAL: You're going to go for C, that she just dropped off, dropped the costume, walked away forever?

SAGAL: You are correct in that.

SAGAL: She does predate Lindsay Lohan, and she just walked away. Apparently this young woman, she did a live appearance in the costume in the early days of Barney, was just besieged by fans, got stuck in the costume and just gave up, took it off, walked away, gave up her chance for fame. A performer named David Joyner then took on the role of playing Barney, did it for many years, spent eight years inside that Barney suit. But he had to overcome a handicap to get the role. What was it? A, as a child, he had a recurring nightmare in which he was trapped inside a large colored dinosaur; B, he couldn't watch a Barney video without falling asleep; or C, he couldn't do the role unless the heat was turned up to, quote, Jurassic levels.

SAGAL: Joyner said - he says that he sat down to watch these videos of the already extant program Barney, and he couldn't get through them they were so dull. But he decided that his role was go in there and bring Barney back to life. So he was inspired.

All right the music on the show of course is an integral part of its appeal. In fact, Barney's theme song, "I Love You, You Love Me," was once used for what purpose: A, to wake long term coma patients, who wake up and ask it be turned off; B, to torture prisoners in prison camps during the Iraq War; or C, on loudspeakers to drive away rodents and other vermin from grain storage facilities?

SERENO: I guess I would have to say C.

SAGAL: You're going to go for C, to drive away rodents?

SERENO: No, it's probably A.

SAGAL: A was to wake long-term coma patients who wake up and ask for it to be turned off?

SAGAL: So you're going to go with C, to drive away rodents and other vermin from grain storage facilities?

SERENO: It's crazy. They're all crazy.

SAGAL: It really was. They would play that, as well as, like, heavy metal music at prisoners to soften them up for interrogation. One U.S. operative told Newsweek, quote, in training, they forced me to listen to the Barney "I Love You" song for 45 minutes. I never want to go through that again.

SAGAL: Carl, how did Paul Sereno do on our quiz?

SAGAL: Paul Sereno, world traveler, paleontologist and professor here at the University of Chicago. Paul Sereno, thank you so much for joining us. Paul Sereno, ladies and gentlemen.

SAGAL: In just a minute Carl does the Downward Facing Dork. It's the listener limerick challenge. Call 1-888-WAIT-WAIT, to join us on air.

Support for NPR comes from NPR stations, and: Angie's List, providing reviews of local roofers, painters, landscapers and plumbers to keep the consumer informed, more at Angie'sList.com; The Sy Syms Foundation supporting advances in science, education and the arts since 1985, at SySymsFoundation.org; and The Economic Development Authority of Fairfax County, Virginia, home to more than 6,700 technology companies at PowerofIdeas.org.