Accessibility links
Part-Time Professors Demand Higher Pay; Will Colleges Listen? In the 1970s, two-year and four-year colleges started replacing full-time faculty with part-time instructors. Since then, disputes over pay, benefits and working conditions for these adjunct instructors have ballooned into big problems on many campuses.

When you think about minimum-wage workers, college professors don't readily come to mind. But many say that's what they are these days.

Of all college instructors, 76 percent, or over 1 million, teach part time because institutions save a lot of money when they replace full-time, tenured faculty with itinerant teachers, better known as adjuncts.

Kathleen Gallagher, a published poet and writer with advanced studies and a master's degree, spent 20 years as an adjunct English professor at several colleges in Akron, Ohio. The most she's ever made in a year is $21,000; last year, she made $17,000.

After one college laid her off last summer, Gallagher was desperately short of money, so she sold her plasma.

"It is embarrassing to talk on the radio and say, 'I think I'll have to go give some blood,' " she says with a sigh. "But I needed gasoline."

She's thought about doing something else for a living.

"I have applied for other work," she says. "I had interviews, but then I remembered what I feel like in the classroom."

Gallagher tears up. She says teaching is her life, her calling. She's always assumed that eventually, a college somewhere would offer her a full-time professorship, but that just doesn't happen as often anymore.

There's a good reason for that, says Rex Ramsier, vice provost at the University of Akron, where Gallagher is teaching one class.

"Institutions have to be very mindful that if we simply tried to staff every course with full-time faculty that have full benefits, the cost of higher education at any institution would go up 30 to 40 percent potentially," he says. "The public's not going to accept that."

More than half the faculty at the University of Akron teaches part time. Ramsier says he's sorry some adjuncts are struggling, but they know, or should know, what they're getting into.

"Part-time work is truly part-time work," he says. "We're not expecting, or trying, to take advantage of people."

Two-year and four-year colleges started replacing full-time faculty with part-time instructors in the mid-1970s. That shift has created lots of tension on college campuses where adjuncts are treated like cheap labor, according to a congressional report released last month.

Initially, part-time teachers were popular because they brought "real-world experience" to the classroom, according to Adrianna Kezar, an expert on workforce issues in higher education and a professor at the University of Southern California. She says things are different today.

"Higher education has begun to adopt corporate management practices," Kezar says. "Corporations move to more contingent labor because it is a cheaper form of labor."

If we simply tried to staff every course with full-time faculty that have full benefits, the cost of higher education at any institution would go up 30 to 40 percent potentially. The public's not going to accept that.

It's certainly cheaper, though the amount depends on the size of the institution and whether it's public or private. A full-time professor's salary can average from $72,000 a year up to $160,000; adjuncts average $25,000 to $27,000 a year, and often much less, regardless of where they teach.

'We Have To Stop Hiding In The Shadows'

At Cuyahoga Community College, just outside Cleveland, 3 out of 4 faculty members are adjuncts, like David Wilder. Now in his late 50s, he has a degree in library sciences and has taught art history at Cuyahoga for 10 years, and 15 years at another school. Despite that, he lives paycheck to paycheck and moonlights in the deli of a nearby hotel. He says the professors are just minimum-wage workers.

"We're just part of working people starting to step forward," Wilder says. "We identify with the fast-food workers that are telling their stories, and we want to do the same."

Some adjuncts here are on food stamps; others struggle to make their car or rent payments.

On a recent day, Wilder and a few colleagues set up a table in the student union to share their stories. One of those with him was Maria Maisto, also an adjunct at Cuyahoga and president of New Faculty Majority, a national support group that's been lobbying for more pay, health insurance, job security and better working conditions.

"We have to stop hiding in the shadows," Maisto said. "We have to not be ashamed to tell our stories." 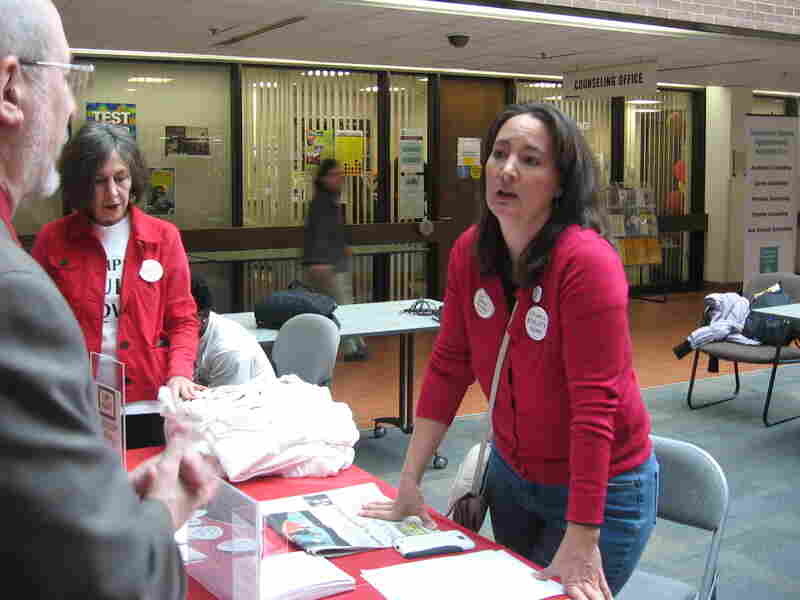 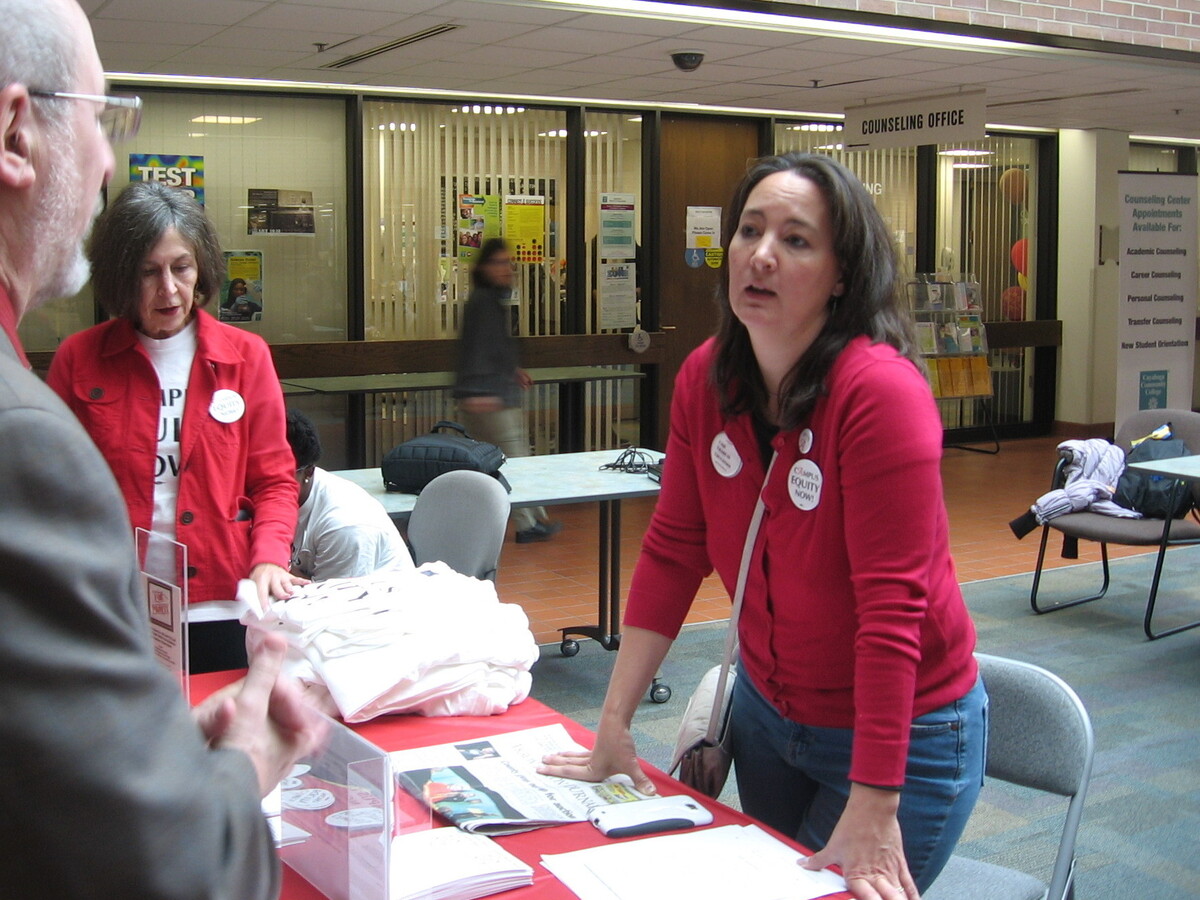 Maria Maisto is an adjunct professor at Cuyahoga Community College and president of the national support group New Faculty Majority.

She says adjuncts here get about $8 an hour. A tall gangly man approached her, pecked at the calculator on his smartphone, and said Maisto's figures were wrong. That was Rudy Stralka, a well-regarded, full-time, tenured business professor at Cuyahoga. He says adjuncts make $22 to $23 an hour, and if you do the math, adjuncts are paid fairly — $160 per class in Maisto's case.

Maisto said she teaches one class that meets for three hours a week; Stralka said that's $26 an hour.

But that's not the case if you count the extra hours outside the classroom that adjuncts are not paid for, said Maisto. Those include preparing for class, grading papers, advising students — part-time professors absolutely get no more than $8 an hour, she says. Stralka wasn't convinced, but he said even if adjuncts are right, their message is falling on deaf ears.

"This is nice: We have an educational table, we talk to people — that's all nice, but it's not going to do a damn thing," Stralka said. "If you really want to do something, you have to get the petitions out and you gotta change the law. You have to get organized, otherwise this is an exercise in futility."

Maisto and her colleagues disagree; they say they've never been more organized. Nationally, about 22 percent of part-time professors belong to a union, according to Maisto. But in the past few years, there's been a spike in the number of colleges and universities that recognize adjuncts' collective bargaining rights.