Accessibility links
An Afghan Success Story: Fewer Child Deaths One of the most dramatic changes in Afghanistan since the fall of the Taliban is the increase in life expectancy from 45 to 62 years. That gain is almost entirely a function of reductions in child mortality due to the spread of basic health services. 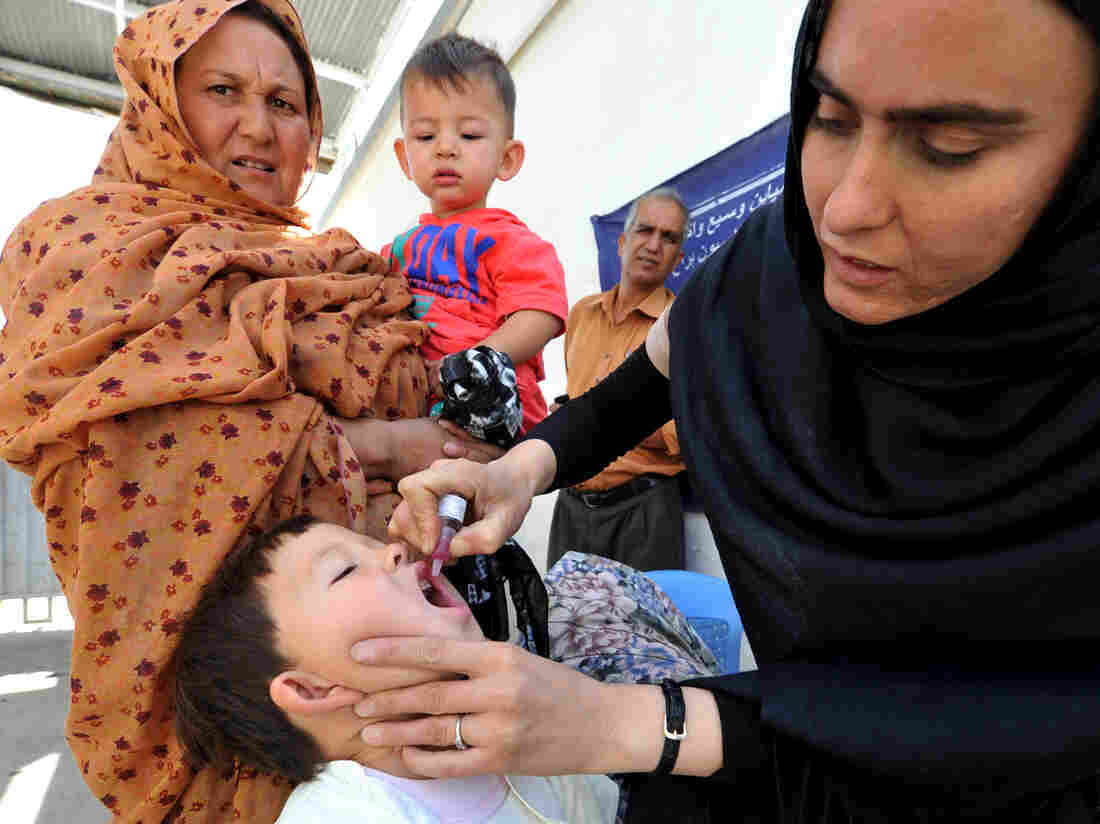 A young girl receives a polio vaccine at the Isteqlal hospital in Kabul on Sept.19, 2011. Adek Berry/AFP/Getty Images hide caption 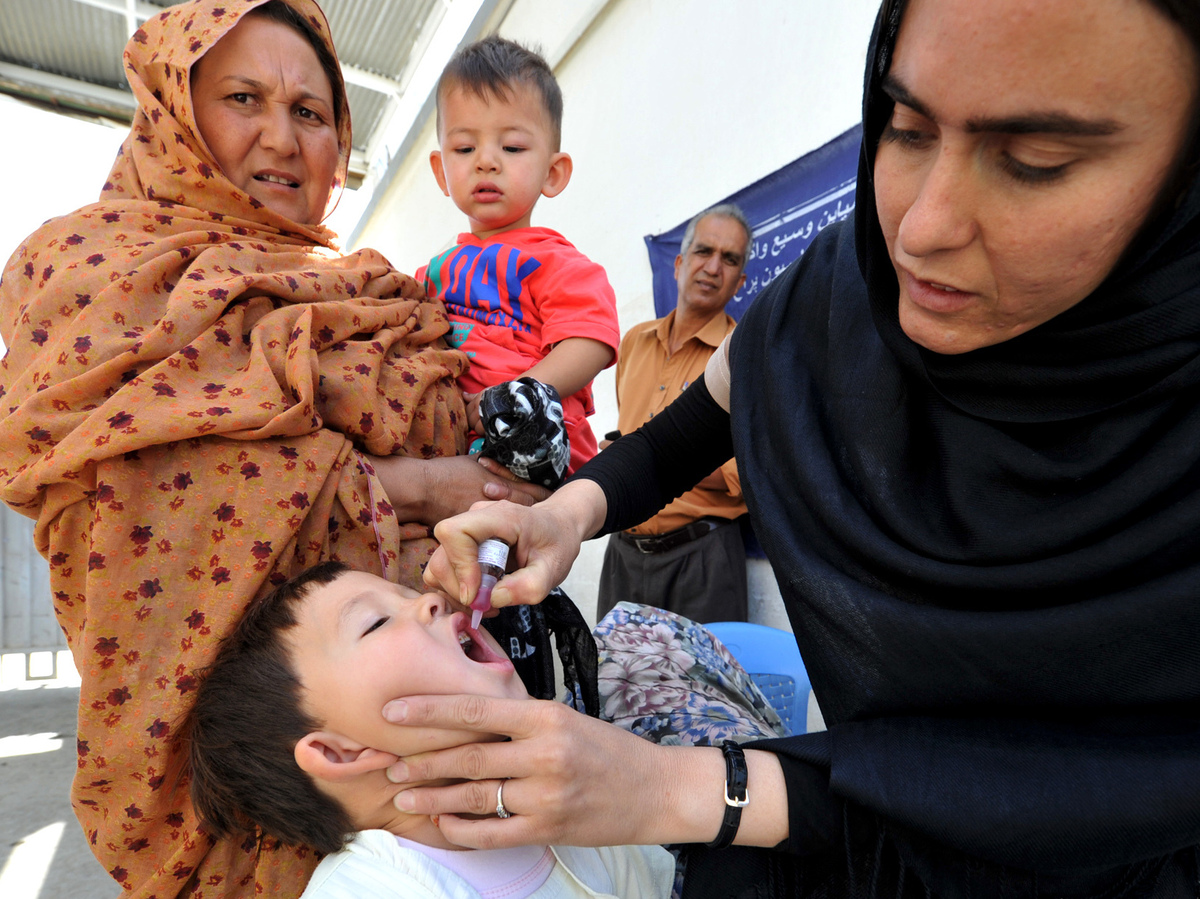 A young girl receives a polio vaccine at the Isteqlal hospital in Kabul on Sept.19, 2011.

One of the most dramatic changes in Afghanistan since the fall of the Taliban is the increase in average life expectancy from 45 to 62 years. That gain is almost entirely a function of reductions in child mortality due to the spread of basic health services.

Yet Afghanistan still has one of the highest child mortality rates in the world, and there could be significant backsliding as the international community reduces aid after NATO troops withdraw at the end of this year.

At the Goldara clinic on a recent day, a two-month-old baby cries loudly, expressing her dissatisfaction with having a needle jabbed into her thigh. But this Penta vaccine will protect her from five different diseases that contribute to infant and child mortality.

In 2001, one of every four children born in Afghanistan died by the age of five. Today, one in 10 children dies by age 5. It's a dramatic improvement — although children are still dying in large numbers from preventable conditions like diarrhea, pneumonia and hypothermia.

The Goldara clinic sits in the center of a ring of destitute villages in the vast Shomali Plain north of Kabul. It's one of some 2,000 health facilities in the country today, up from only 400 a dozen years ago. According to the Afghan government, more than 60 percent of the population now has access to health services.

The clinic is part of a program run by Afghanistan's Ministry of Public Health and administered entirely by non-governmental organizations. The clinic provides vaccinations, midwife services and other basic medical education and treatment.

Samia, covered in a traditional blue burka, has come to the spartan six-room clinic to have one of her four children vaccinated.

She says she's been pregnant six times; the first ended in an abortion due to complications, the second time she gave birth at home and the baby died within four days.

"Across Afghanistan, we're still looking at up to 80 percent of women giving birth at home," says Rachel Maranto, director of program development for Save the Children, an international organization that's been doing health work in Afghanistan since the 1970s.

One of the group's programs is training volunteer community health workers who go out into the villages and raise awareness of the importance of things like prenatal care and going to a clinic or midwife for childbirth.

It was a community health worker who convinced Samia to seek medical services after her baby died. Since then, she's had four children, all born in clinics and all vaccinated.

Noorzia, one of the community health workers at the clinic, says the biggest challenge is changing cultural practices.

"Once a mother-in-law threw me out of the house during a counseling, and often mothers-in-law won't even allow us into the house," she says. 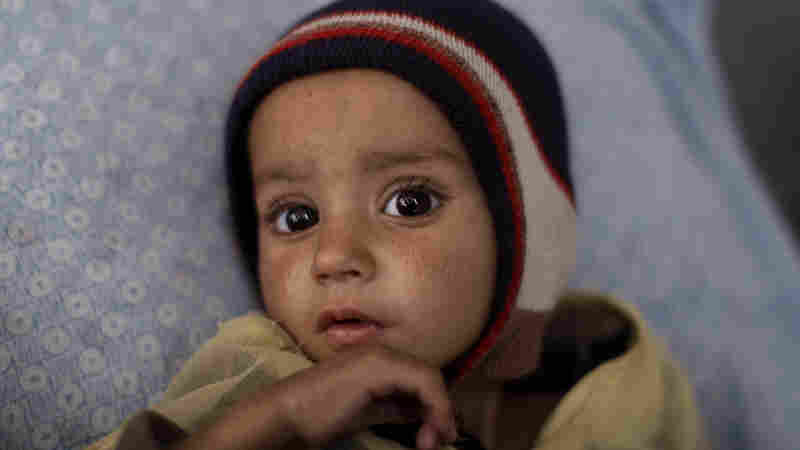 Eid Mohammed who suffers from from chronic malnutrition, lies on a bed at Indira Gandhi Children's Hospital, in Kabul, Afghanistan in 2011. In 2001, one of every four children born in Afghanistan died by the age of five. Today, one in 10 children dies by age 5. Muhammed Muheisen/AP hide caption 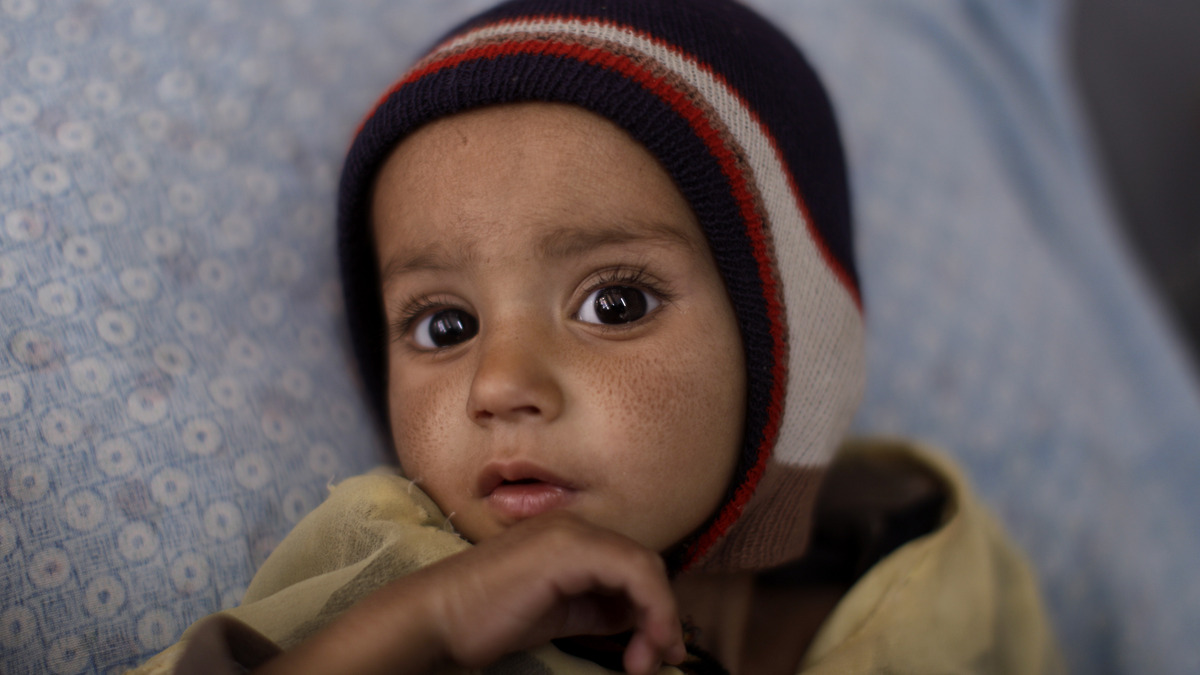 Eid Mohammed who suffers from from chronic malnutrition, lies on a bed at Indira Gandhi Children's Hospital, in Kabul, Afghanistan in 2011. In 2001, one of every four children born in Afghanistan died by the age of five. Today, one in 10 children dies by age 5.

Health workers struggle to convince older woman to allow their daughters to deliver in clinics.

"They say, 'When I was younger I gave birth to many children without going to a health facility, so my daughters can do the same,'" Noorzia says.

Mothers also pass along bad practices like feeding their infants tea and biscuits instead of breast milk.

Malnutrition is a major contributor to child mortality, and actually an even bigger challenge, says Save the Children's Maranto. She says about 60 percent of all children experience stunted growth.

Continuing the progress of the last decade also requires recruiting and training more female health workers, which is no small task, she says. For example, in Uruzgan, the province where the group works, less than half of 1 percent of the women are literate.

Save the Children ended its support for the community health workers in Goldara several months ago, and part of the purpose of Maranto's visit is to see if the services are continuing.

A group of burka-clad women say they are carrying on as community health workers, but they miss the neonatal kits that Save the Children used to provide. They say that villagers are accusing them of stealing the kits.

This gets to the thorny issue of sustaining the gains that have been made so far. The World Bank, the European Union and the U.S. Agency for International Development are the primary funders of Afghanistan's basic health services. Continued support from USAID is most in doubt as the international community draws down its support for Afghanistan, says Maranto.

"We hope very much that USAID will continue to commit for another three years," she says.

USAID says it intends to continue providing $100 million a year for health services in Afghanistan, but officials warn their funding is subject to congressional approval. And Congress just voted to cut Afghan aid almost in half.