Accessibility links
A Meal To Honor Early African-American Cookbook Authors Books published in the 19th and early 20th centuries brought Amanda Moniz back to a food career she thought she had left behind. Inspired by their recipes — and, she says, by their pursuit of independence through cooking and writing — the former pastry chef sets a table for Black History Month. 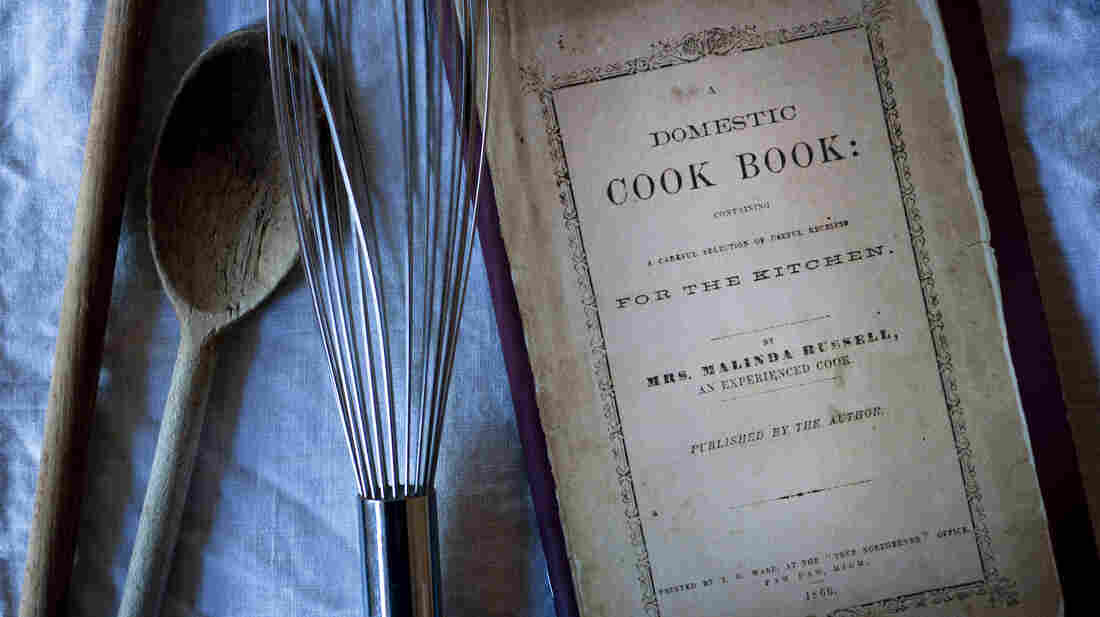 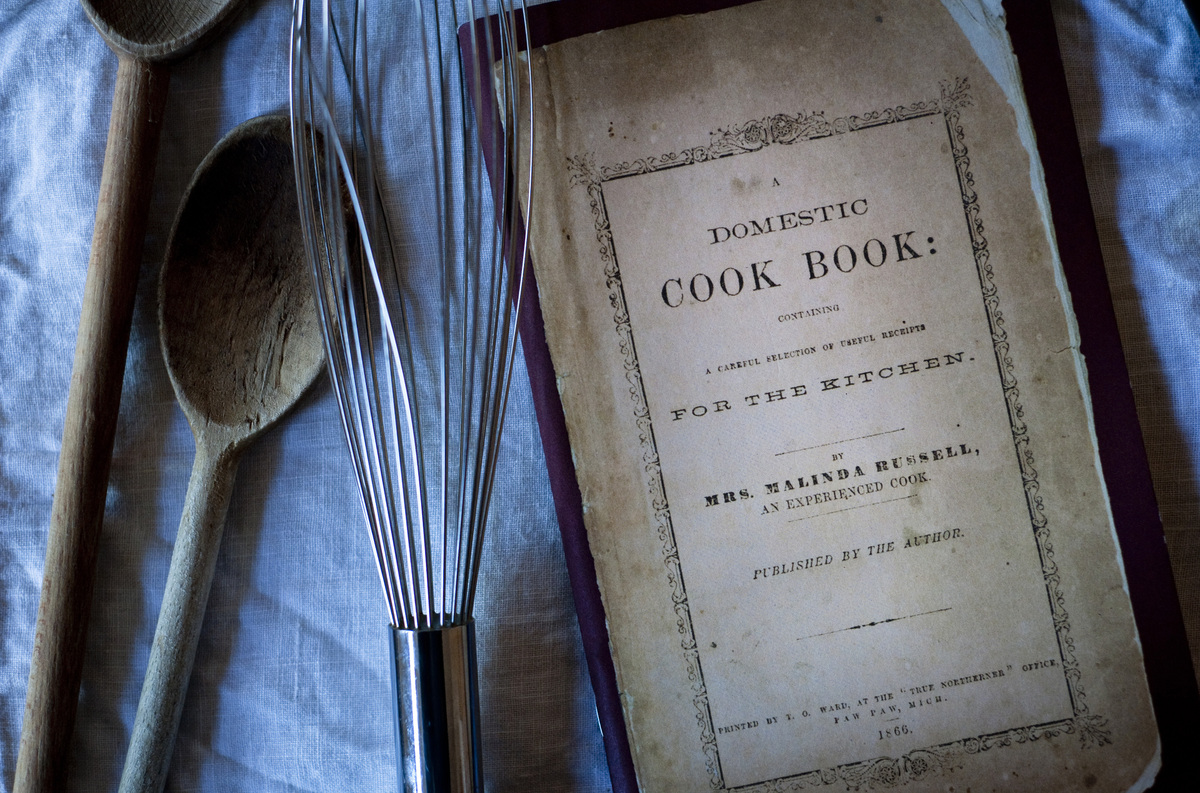 The earliest African-American cookbook authors brought me back to a food career I thought I had left behind. Years ago, I was a pastry chef, but I changed course and went to graduate school for a doctorate in American history. Lately, I've been drawn back into the food world thanks to these authors and their determined pursuit of independence and equality through their cooking and writing.

It was the stories told by two men and two women that captured my imagination. In 1827, Robert Roberts became one of the first African-American authors with The House Servant's Directory, which includes recipes. In 1866, Malinda Russell wrote A Domestic Cook Book. Fifteen years later, Abby Fisher gave the world What Mrs. Fisher Knows About Southern Cooking. And in 1911, Rufus Estes published Good Things to Eat, as Suggested by Rufus. Beyond the wonderful recipes, it is the authors' stories that make these books compelling. 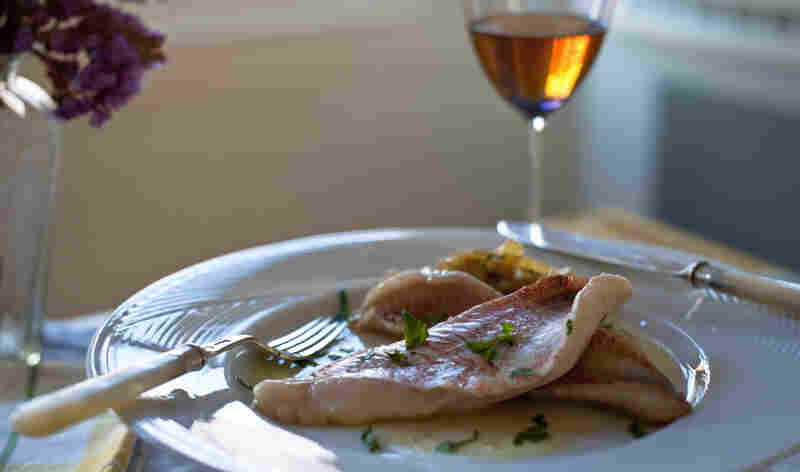 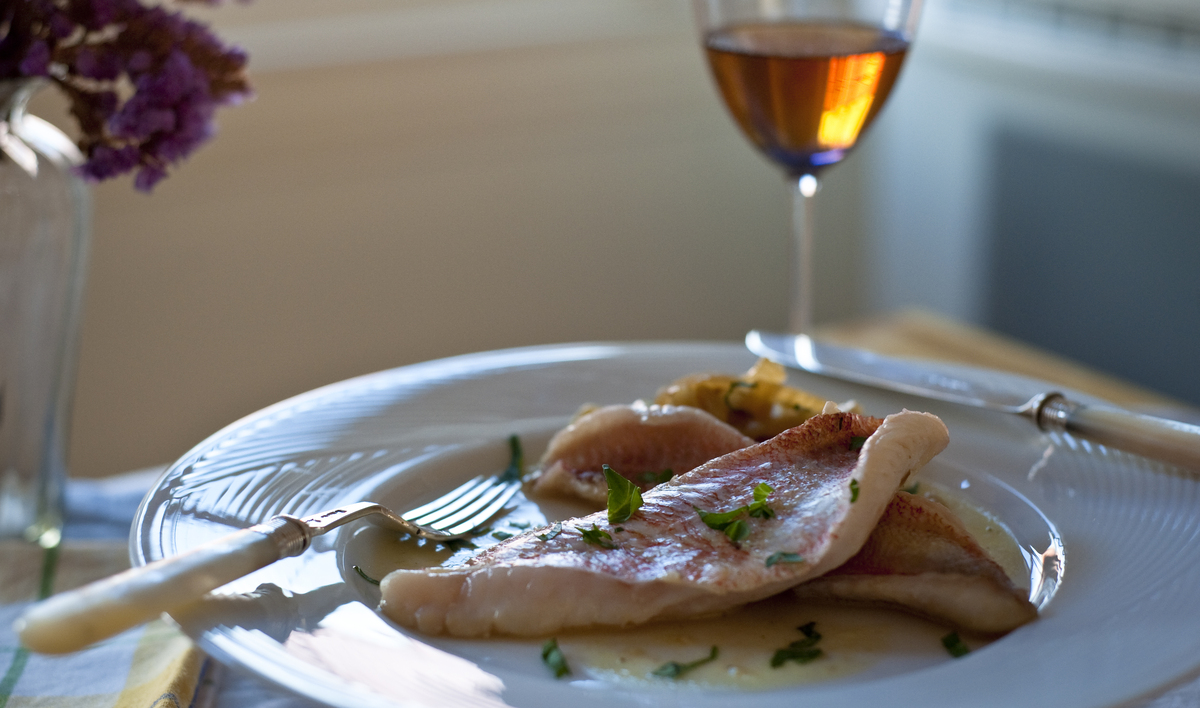 In their honor, I put together a meal with recipes adapted from each author's cookbook. It seemed like a good way to start Black History Month.

Born in Charleston, S.C., around 1780, Roberts, a free man, lived in Massachusetts by 1805. In his book, he lets us know he made a living as a servant in prominent households and had visited Europe. What he doesn't say is that he also was active in black abolitionist politics. Among other things, he led local opposition to the movement to send free blacks from their native United States to the new Liberia colony.

... after the Civil War, [Abby Fisher] opened a successful catering business. She won medals for her cooking, and it is her professional accomplishment that she stresses.

More explicitly than Roberts, Malinda Russell recounts her story in her book. She was born in Tennessee around 1820. Her grandmother was a freedwoman, and freedom, she suggests, was her birthright, although there are indications that she had known bondage. She worked as a cook and a laundress. She married and was left a widow with an invalid son. As a young woman, she planned to emigrate to Liberia. When her plans were stymied, she opened a pastry shop in Tennessee. African-American food businesses in the antebellum South offered not only means of support but also places to be free of white oversight.

Abby Fisher published her book, she writes, at the behest of friends and patrons in California. She had lived in Mobile, Ala., and both she and her husband were illiterate. She implies that she dictated her book. Beyond those bare details, she tells us little. Born in the 1830s to a French father and a mother of African descent, she most likely had been a slave. In California, where she and her family moved after the Civil War, she opened a successful catering business. She won medals for her cooking, and it is her professional accomplishment that she stresses. She closes her book with a recipe for "Pap for an Infant Diet," which she describes as "a Southern plantation preparation." She notes that she had "given birth to 11 children and raised them all." Family, she wants us to know, had helped her endure.

Amanda Moniz is a historian and former pastry chef. She blogs at History's Just Desserts.

Writing well after slavery ended, Rufus Estes says the most about bondage. "I was born in Murray County, Tennessee, in 1857, a slave," he starts. When the Civil War broke out, he goes on, adult male slaves in the area had escaped to Union forces, and "little folks" like him had had "to bear the burdens." After emancipation, he had the barest of schooling. His mother needed help, so Estes milked cows and toted meals to workers in the field. At 16, he left agricultural labor to work in restaurants. Eventually, he joined the Pullman rail service and became a noted chef. He met presidents and international celebrities and traveled to Japan.

Their stories are powerful. Their recipes are great, too.

And if you'd like to read the books yourself, copies are available at booksellers and online (get started with the links provided above). 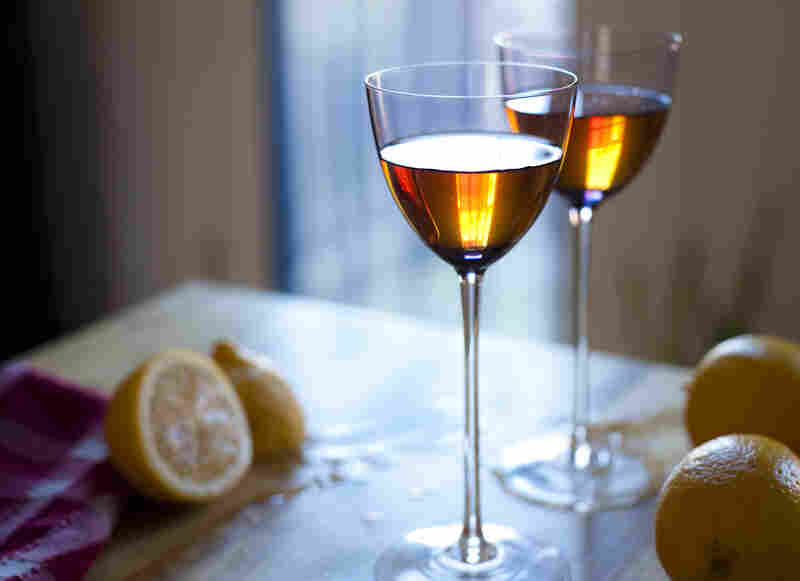 Roberts' book features many beverage recipes, from lemonade to raspberry water to spruce beer and more. I chose this punch, adapted from his book, because while it is potent, it is delicate enough to go with the fish.

Combine all of the ingredients in a pitcher. Stir to dissolve the sugar. Let cool. Serve chilled. 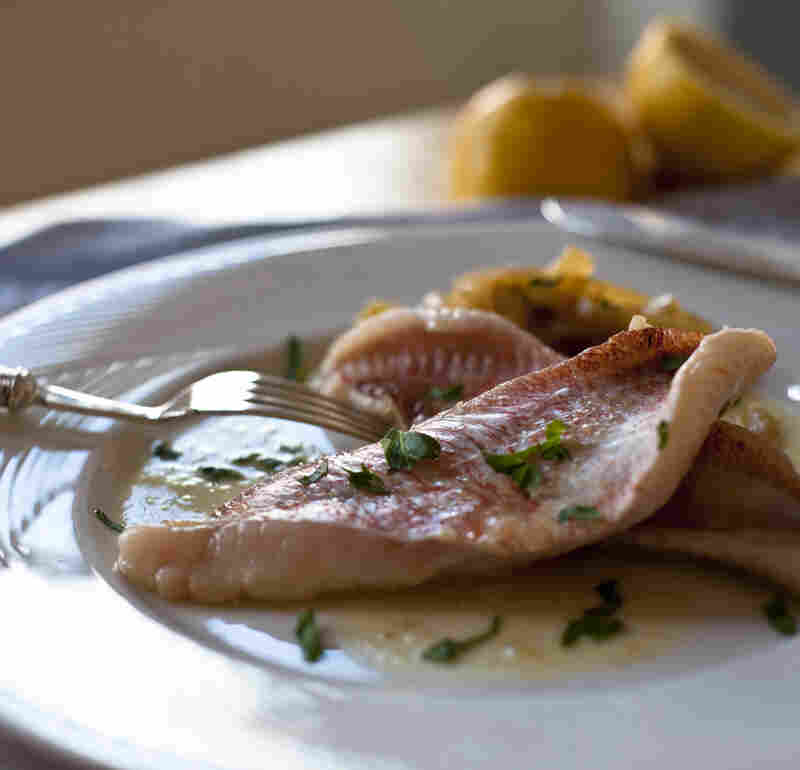 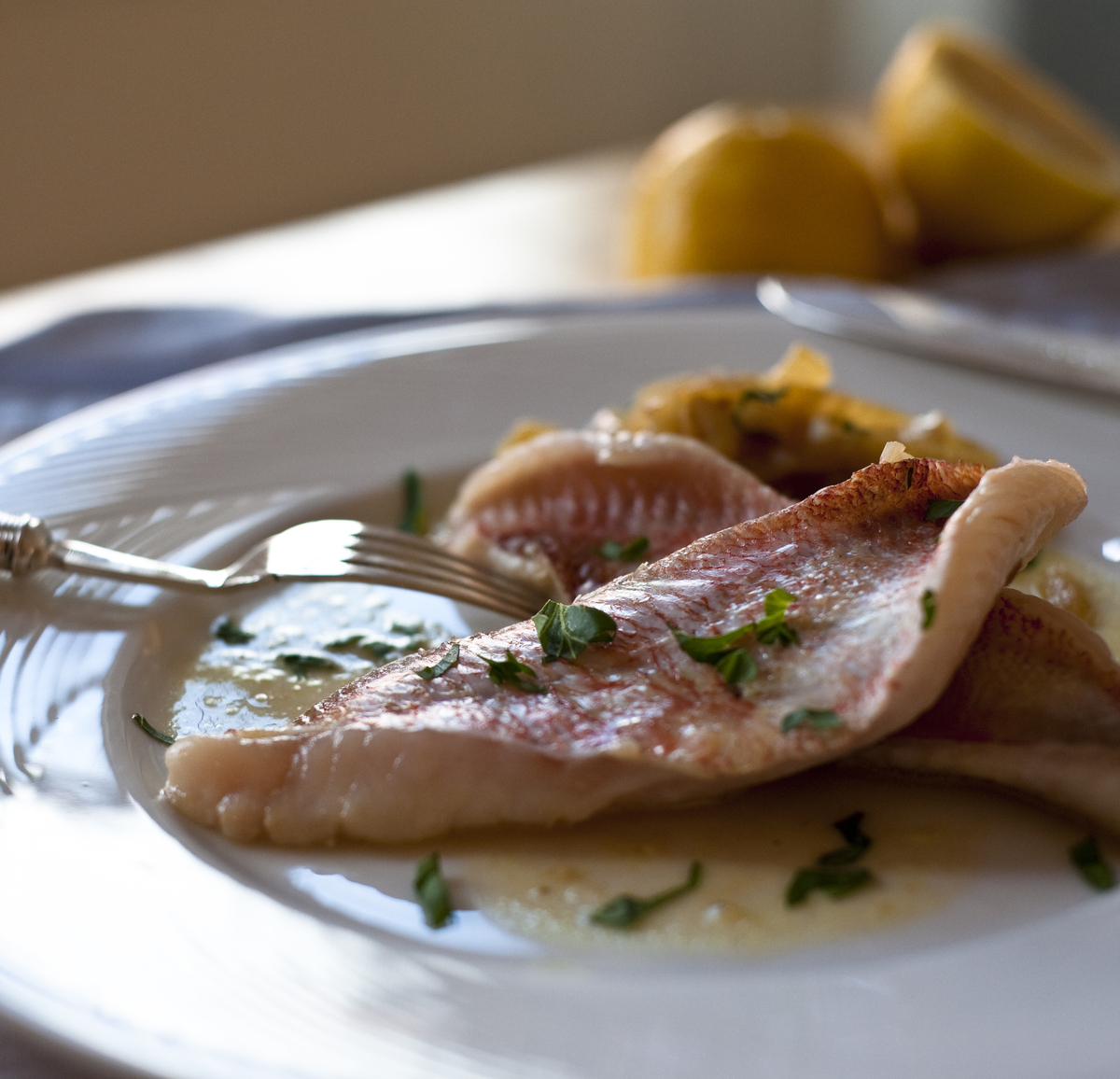 Estes wants the reader to know he'd met international stars and had traveled across the world. I adapted this recipe in tribute to his cosmopolitanism. He suggests serving the fish with homemade croutons. To my taste, the croutons didn't complement this fish, but you may think otherwise.

4 tablespoons butter, divided in half

1/8 teaspoon cayenne, or to taste

Remove the onions to a serving dish.

Add the fish and cook, turning once, until it is no longer translucent and it flakes when tested with a thin knife. The cooking time will depend on the type and thickness of the fish, but will generally be around 10 minutes total.

Garnish with the parsley and serve with the onions on the side and chow chow (recipe below) as a condiment. Rice makes a nice accompaniment. 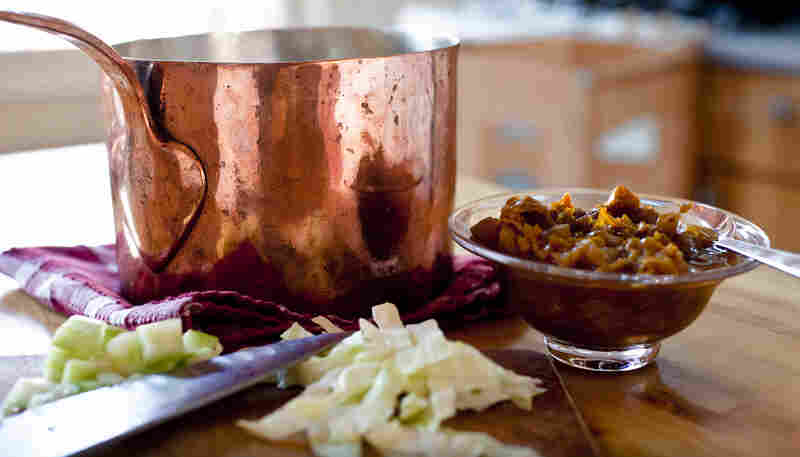 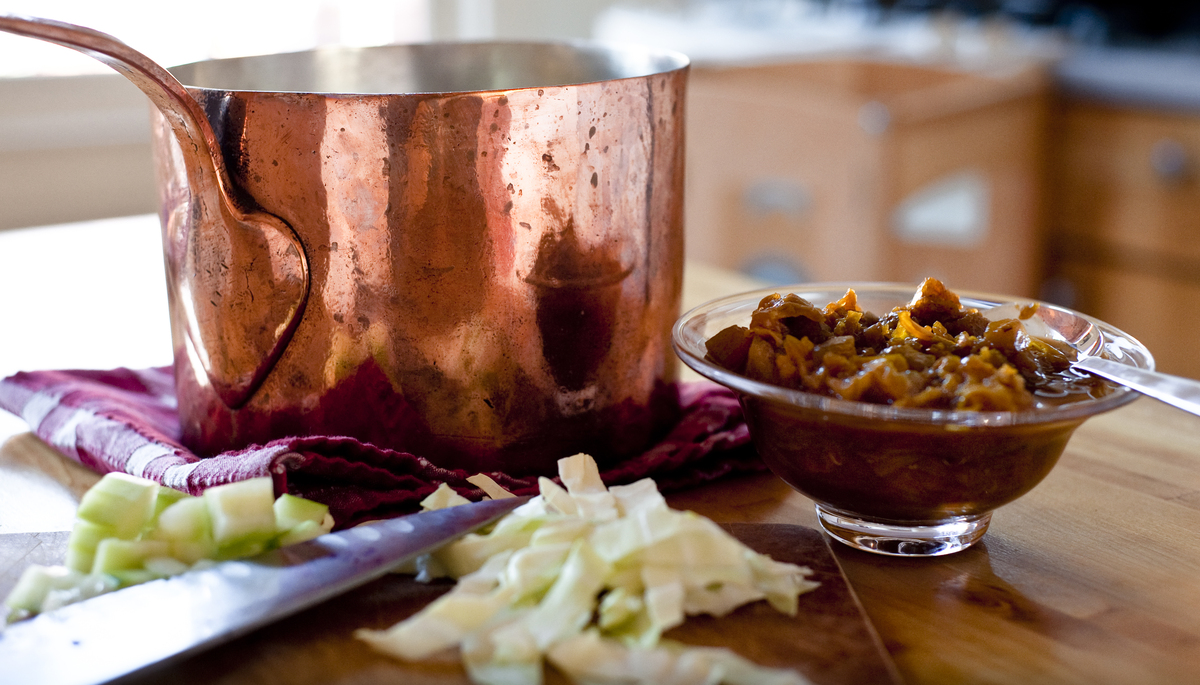 Fisher won medals for her condiments, so her chow chow was an easy choice. Her recipe called for 4 gallons of cucumber, a gallon of cider vinegar and similarly large quantities of everything else. I cut the recipe down and somewhat reduced the proportion of vinegar. In addition to fish, this would be good with chicken or other meat, or beans.

Half a head (about 4 cups) green cabbage, thinly sliced

2 cucumbers grated with a medium hole on a box grater

1 to 2 onions, finely chopped or grated

Toss the cabbage and salt together. Let sit at room temperature for 4 hours or overnight in the refrigerator.

Bring the cider vinegar to a boil. Add the cabbage, including the accumulated juices, the cucumbers, onions, brown sugar, cayenne, pepper, turmeric and wine vinegar to the pot with the cider vinegar. Bring to a simmer over high heat. Lower the heat and simmer for about an hour, stirring occasionally, until the liquid has reduced substantially. Let cool. Serve as a condiment. 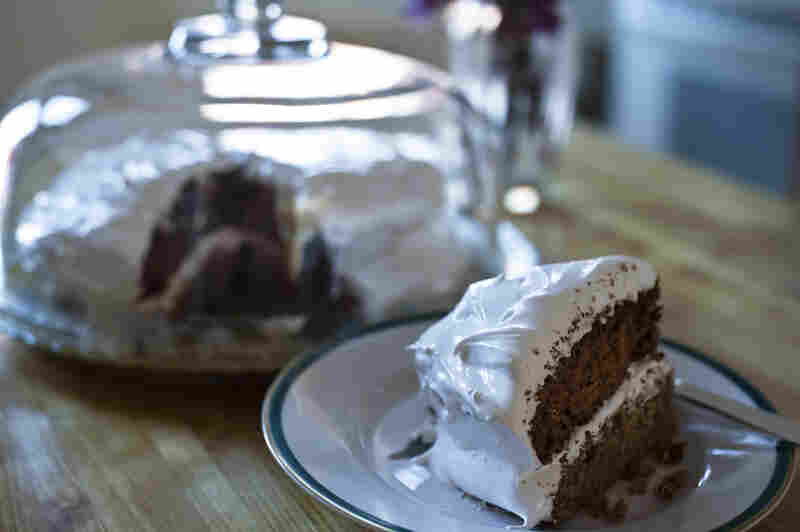 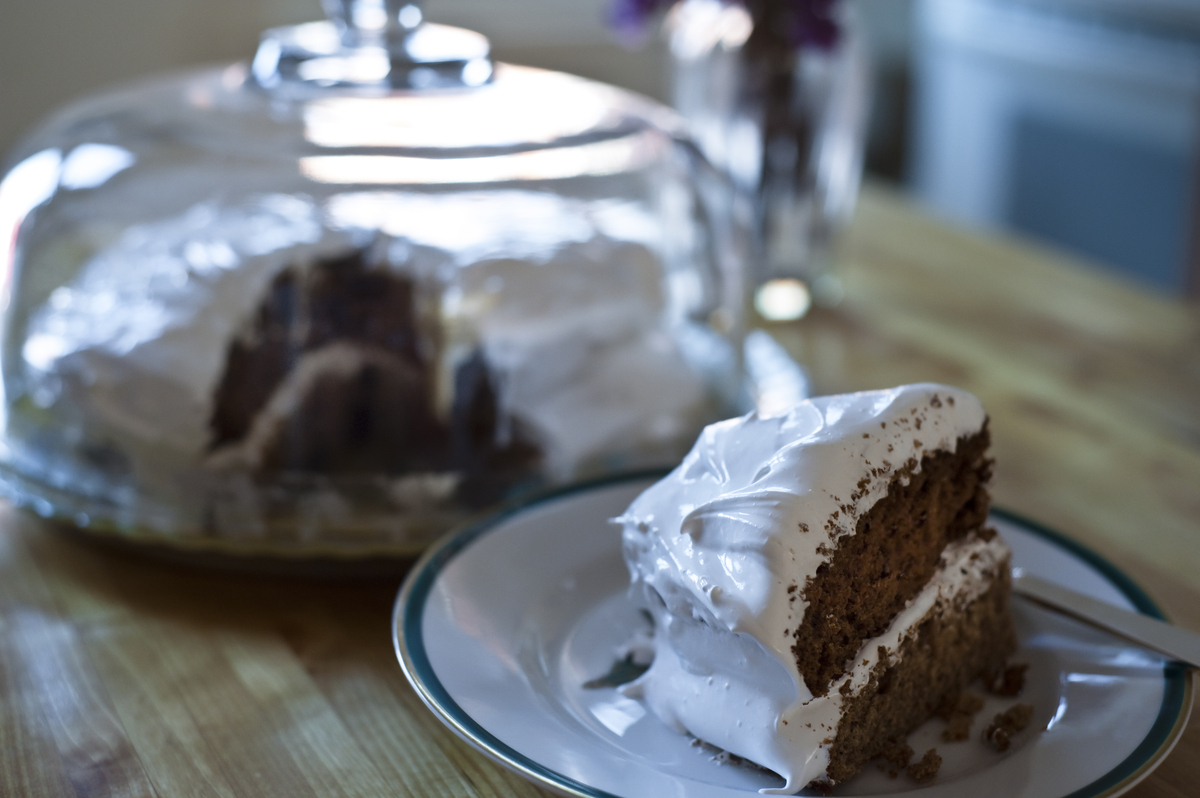 A cake was a natural choice from this pastry shop owner's cookbook. With pangs of guilt, I tweaked this recipe. Russell's recipe calls for brandy, lemon extract and rosewater. To me, those other flavorings got lost with all the spice, so I took them out and slightly increased the sour cream. I also added molasses to the recipe to balance the cake's taste. Russell did not suggest icing this cake, but her cookbook does include a few boiled icing recipes. In tribute to her original, I added the flavorings I took out of the cake to the icing.

Sift together the flour, spices, baking soda and salt. Set aside.

Cream the butter and sugar until light and fluffy.

Add the molasses and mix until combined well.

Add the eggs one at a time, mixing until combined and scraping the bowl with a plastic spatula after each addition.

Alternately, add the flour and sour cream, beginning and ending with the flour. Add the flour in three additions and the sour cream in two. Scrape down between each addition. Mix just until combined.

Divide the cake batter between the two pans.

Place in the oven and bake until a cake tester inserted in the middle of the cake comes out clean, 25 to 30 minutes.

While the cake is baking, make the frosting. Time so it's ready when the cake comes out of the oven. The icing must be used right away before it starts to harden.

With a handheld or stand electric mixer, combine the egg whites, sugar and water in a metal bowl (or your stand mixer's bowl if using). Place over a pot of simmering water, without the bottom of the bowl touching the water.

Whisking constantly, cook for a few minutes until the mixture is white and hot, and the sugar feels dissolved if you quickly dip your finger in to test it. Remove from the heat and beat it with your handheld mixer or the whip (whisk) of your stand mixer until the mixture is cool and fluffy. This will take several minutes. Add the flavoring of your choice and mix to combine.

Fill and frost the cake with the boiled icing, flavored to taste. Or serve each cake dusted with powdered sugar.