Accessibility links
Which Way For Stocks? Investors Watch 'Worry Index' For Clues The new year has brought much higher volatility to the market, with stocks bouncing up or down almost daily amid doubts about the global economic outlook. The closely watched Volatility Index has signaled uncertainty about the market's direction in recent weeks.

Which Way For Stocks? Investors Watch 'Worry Index' For Clues

Traders work on the floor of the New York Stock Exchange on Tuesday afternoon.

Anyone who invests in the stock market knows share prices can go up — and down. That's why they call it a market.

Still, this year, price movements have been fast and furious — shocking investors and prompting many to fear "volatility."

The Chicago Board of Options Exchange tracks the speed of price movements using its Volatility Index, or VIX. The new year has sent the VIX soaring, in contrast to last year's unusually smooth performance.

"People talk about the VIX as the 'Worry Index,' " said Jonathan Lewis, chief investment officer at Samson Capital Advisors. "Volatility rises when people get surprised" and decide they suddenly must change their investment decisions, he said.

"Volatility is the market's way of expressing concern that the data and policy pronouncements aren't coming in the way everyone had been expecting," Lewis said.

The Volatility Index, a measure of stock market volatility, has spiked in recent weeks. 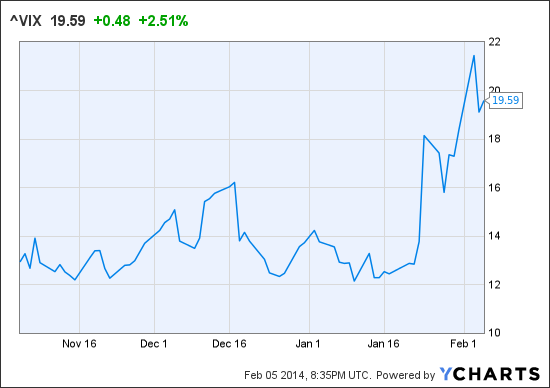 A volatile market could be driven by good news or bad, so volatility by itself doesn't tell us much. But combine speed with direction — and you have a tale to tell. At this point, the story of 2014 is just sad.

Lewis said that as January began, most investors and analysts were expecting 2013's trends to continue. That is, they believed stock prices would continue to edge up and volatility remain low.

But on Jan. 10, the Labor Department stunned investors by saying that in December, employers had created only 74,000 jobs. That was far fewer than the 200,000 new jobs most economists had been predicting.

"The year began on a sour note," Lewis said. The bad jobs report "cracked people's certitude about where the economy was going."

Since then, the surprises have kept coming. In recent weeks, reports have suggested that the global economic outlook is darkening. Data showed corporate profits may be weakening, manufacturing slumping, auto sales slowing and home sales cooling. Overseas, China is slowing and many emerging markets seem to be heading for big trouble.

All of that has prompted many investors to try to lock in last year's gains before they shrink too much. So they are selling stock, driving prices are down by roughly 7 percent since Jan. 1, as measured by the Dow Jones industrial average.

Lewis says the next big surprise could come on Friday. That's when the Labor Department will release the job-creation data for January. If it surprises economists on the upside, then the VIX may have another big day — but for good reasons as people race to buy shares.

Fran Kinniry, a principal of the Vanguard Investment Strategy Group, said small investors should try not to overreact if the Friday report brings more bad news. He noted that exactly five years ago, the Dow Jones industrial average was getting pummeled during the peak of the Great Recession.

"In 2008 and 2009, we saw volatility that was unprecedented," he said. "It would have been disastrous if you had acted on that" and sold all of your stock at the bottom of the market.

The people who stayed invested and rode out the volatile period got back their money and moved ahead, he said.

Kinniry said the key to successful investing is to put money into the stock market only if "you can stomach the volatility and stay the course for the long term."