Accessibility links
Movie Review - 'The Lego Movie' - A Goofy Toy Story That Genuinely Clicks An order-loving businessman plans to destroy the Lego universe by permanently gluing all of its pieces together. Critic Joel Arnold says the film is a brash brand-merchandising exercise with a gratifyingly silly sense of creativity and play. (Recommended) 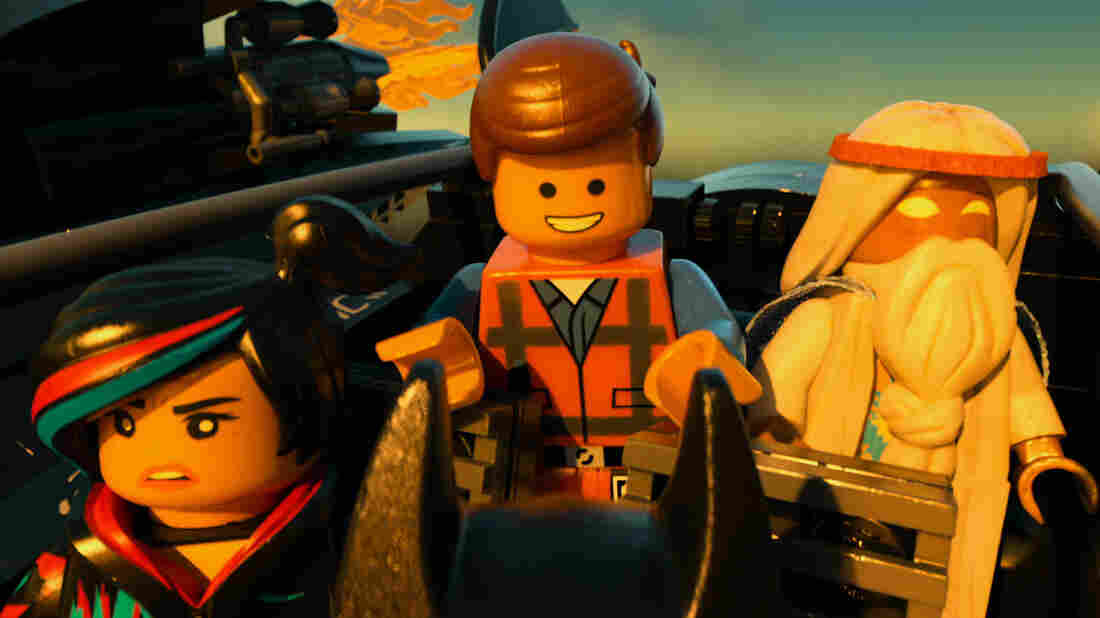 In The Lego Movie, ordinary-guy Emmet (Chris Pratt) is expected to save the world with the help of a rebellious crew that includes Wyldstyle (Elizabeth Banks) and Vitruvius (Morgan Freeman). Warner Bros. hide caption 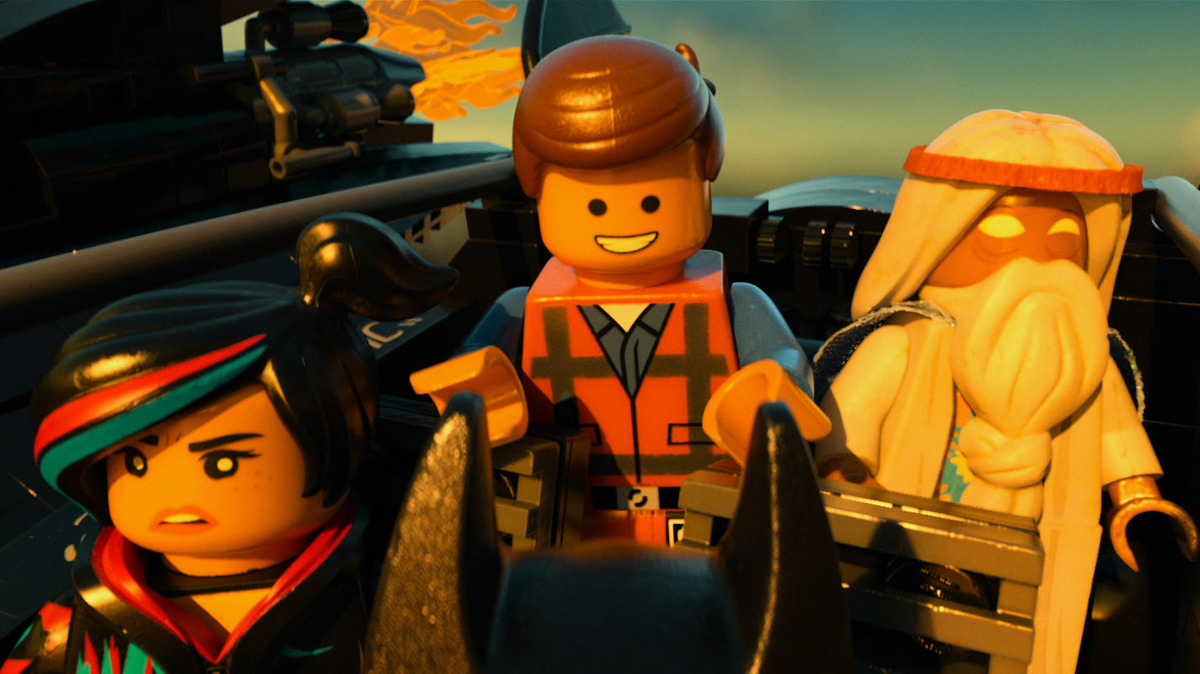 In The Lego Movie, ordinary-guy Emmet (Chris Pratt) is expected to save the world with the help of a rebellious crew that includes Wyldstyle (Elizabeth Banks) and Vitruvius (Morgan Freeman).

If you'd told 10-year-old me there was going to be a movie all about Legos and the world they inhabit, I'd have been in line at the theater right then. Oh, it's not out until 2014? Okay, let me just build a time machine out of Legos and travel to the future. But adult me, hardened by years of non-Lego life experience — insipid toy-to-movie adaptations like Battleship, for instance, plus a sore lack of a regular free-form building sessions — had his guard up.

Wasn't necessary: The Lego Movie may be one giant advertisement, but all the way to its plastic-mat foundation, it's an earnest piece of work — a cash grab with a heart. Made for, with and about Legos, the movie is also made for, with and about imagination, and when that association seems completely natural, it's a win all around.

The movie chooses as its hero the unimaginative but boundlessly positive Emmet (voiced by Chris Pratt), who's just another average Lego guy living in the big Lego city going about his regular Lego day. As with most things Lego, there's an instruction manual for everything, and Emmet eats, watches and says exactly what he's supposed to. The instructions say that's how you fit in, make friends, lead a happy life — only somehow that hasn't worked out for Emmet, who doesn't really have friends yet. (There's an unsubtle critique of mainstream conformity going on here, exemplified by the transparently dumb yet incredibly catchy Lego pop hit "Everything is AWESOME," which won't be leaving your head for days after you hear it.)

There's an evil mastermind bent on destroying the world, a prophecy about a chosen one and a spirited adventure to get to, but let's talk for a second about how this movie moves: When Emmet showers, the water and soap suds are Lego pieces. When circumstances lead Emmet out of the city and across Lego deserts, forests and oceans, the land, sea and lava are all solid Legos.

Animated in 3-D, but made to look like it's a stop-motion joint, the movie takes pleasure in translating how we move to a Lego-based reality and revels in the goofiness of a world operating under Lego-specific laws of physics. When you ride a horse its legs stay frozen even at a gallop; your head can swivel 180 degrees; and Krazy Glue spells immobilizing doom.

Writer-directors Phil Lord and Christopher Miller, of Cloudy with a Chance of Meatballs, charged both with balancing the needs of a brand and telling a lighthearted story, never miss an opportunity to get silly with how Legos work: When Emmet catches a mysterious woman named Wyldstyle (Elizabeth Banks) poking around the construction site where he works, for instance, the slow-motion hair flip you've seen in a thousand Hollywood romances is a clip-on hair piece swiveling back and forth on her yellow Lego head.

The self-conscious, irreverent tone holds steady as the stakes increase. When Emmet finds a strange red piece that sticks itself to his back, Wyldstyle identifies him as The Special — the smartest, most talented, most interesting, most superlative-in-everything person who's destined to save the Lego world from the order-obsessed Lord Business (Will Ferrell). Of course Emmet goes along with the idea, with Pratt lending him a can-do enthusiasm that's infectious to everyone but the movie's other characters — especially once Wyldstyle, along with sage Lego wizard Vitruvius (Morgan Freeman), and a brooding, self-absorbed Lego Batman (Will Arnett) discover that he's not special at all.

That doesn't stop Emmet from being pursued by Bad Cop (Liam Neeson), on orders from Business, across the diverse Lego world. (If there's a Lego set for it, they go there.) Neeson also voices Good Cop — the split personality living on the back side of Bad Cop's head — and it's a rare delight to hear Neeson depart from the growl for cheery words of encouragement.

Energetically plotted and lousy with jokes, The Lego Movie succeeds as much more than a marketing ploy, not least because it understands what makes Legos so appealing and embraces the anarchic way kids actually play with them: The instructions are there, but often the most fun you can have is when you break the rules and assemble something weird and new that only you could create — whether it's a spaceship built from mountains and alligators or a double-decker couch.

Emphasizing that idea too bluntly in a sharp swerve near the movie's end almost sends our heroes jumping the Lego shark, but it's hard to fault the filmmakers for getting a little saccharine; they're sincere about celebrating imagination and play. They've delivered a story that could have been spun from the head of a kid sitting down to play with his Legos — and for adults ready to dust off their childhood sets, they've captured that feeling of creative possibility remarkably well. (Recommended)