Accessibility links
Plenty Of Heart, Not Much Art In 'Monuments Men' A George Clooney project based on the true story of a World War II mission to rescue stolen art from the Nazis, the new film is a long-winded, lackadaisical look at a fascinating real-life story. 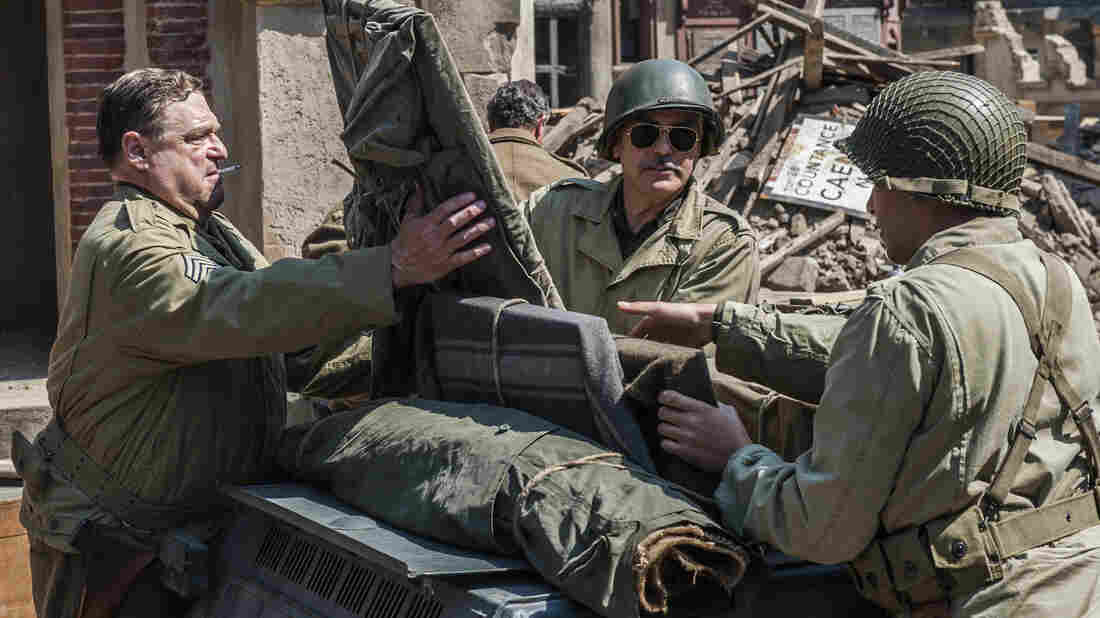 There's a fascinating tale to be told in The Monuments Men, George Clooney's new film based on the true story of a search for looted art stolen by the Nazis during World War II. In real life, with fighting still raging on the battlefields of Europe, a small team of art experts searched urgently for tens of thousands of missing paintings and sculptures. The movie's audience will search for something a little different.

It's the spring of 1944 when middle-aged museum curator George Clooney tells middle-aged art restorer Matt Damon that he's got the go-ahead from President Franklin Delano Roosevelt to head for the Continent. The only catch: He's got to go as an enlisted man, with everything that entails.

Damon's character is skeptical. "You want to go into a war zone and tell our boys what they can and cannot blow up?"

That's the idea, he's told — though commanders on the front won't be terribly sympatico when they get there. He's even more skeptical about the notion of their joining a whole cultural-over-the-hill-gang in basic training.

And when we meet the gang, it's evident why. There's a disgraced museum director straight from Downton Abbey (Hugh Bonneville), an artist straight from The Artist (Jean Dujardin), a bickering odd couple of nonartist hangers-on (Bill Murray and Bob Balaban), and a sculptor (John Goodman) who drags himself through a basic-training obstacle course with cheerful abandon, assuming erroneously that the teenagers firing just over his head are shooting blanks.

You needn't worry for a while, though, because Clooney not only acts in and directs this high-spirited little epic — which seems to want to be the best World War II movie of 1963 — but he also co-scripted, and he has a lot to get off his chest before anything much can happen.

Get off his chest not in dialogue, exactly, but in speeches — patriotic ("We must and will win this war"), noble ("We're fighting for a culture and a way of life"), expository ("It's not random, it's systematic; every one of those paintings is a masterpiece"), lofty ("Remember the high price that'll be paid if the very foundation of modern society is destroyed") and philosophical ("You can wipe out a generation of people, you can burn their homes to the ground and somehow they'll come back, but if you destroy their achievements, their history, it's as if they never existed").

I'm guessing audiences would get the point without all the pointing, but credit the director-star-producer-co-writer with making a film that almost no one else in Hollywood could have gotten made. And credit his buddies for being good sports in it. Damon, for instance, isn't so much playing a part as playing a walking bad French joke, who's mocked by Cate Blanchett in an Australian-French accent. (The crust!)

Thing is, though, they're all working hard to liven-up what turns out to be a surprisingly lackadaisical race against time. There's lots of information, some nice images, plenty of earnest sermonizing about culture and almost no suspense, or tension, or character development, or structure. Or, well, art.