Accessibility links
Movie Review - 'The Last of the Unjust' - The Holocaust Recalled, Again Documentary filmmaker Claude Lanzmann, known for his long and thorough examinations of the Holocaust and its memory, presents a series of 1975 conversations between himself and exiled Jewish elder Benjamin Murmelstein. (Recommended). 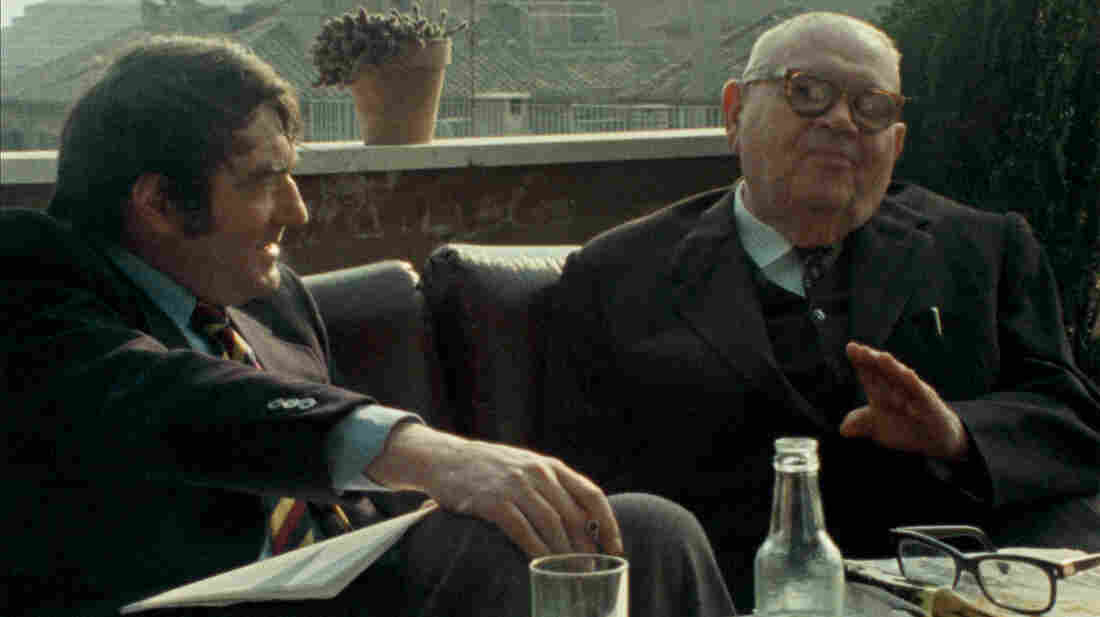 In 1975, Shoah director Claude Lanzmann interviewed Benjmain Murmelstein, the last surviving Elder of the Jews of the Czech Theresienstadt ghetto, at his home in Rome. The resulting film is The Last of the Unjust. Cohen Media Group hide caption

The Last of the Unjust

With a running time of more than nine hours, Claude Lanzmann's monumental 1985 documentary, Shoah, was never destined to become a mass audience draw. But this sober, taxing, utterly absorbing attempt to document the Holocaust grows ever more essential precisely as our collective memory is increasingly eroded by the reductive shorthand of emaciated bodies or piles of shoes discarded by concentration-camp inmates as they went to their terrible fate. For Lanzmann, understanding trumps empathy.

Sidestepping the easy iconography of grief, Lanzmann mounted a meticulous inquiry into the diabolical methodology of the Nazi machine. Shoah found the horror in the testimony of survivors, collaborators and implementers of the Final Solution, then doubled down with a slow camera that traveled over the present-day tranquillity of the sites of mass murder. Lanzmann laid out how it was all done, then showed us how quickly we forget.

His obsession with the mechanics of genocide carries over to The Last of the Unjust. Here the director, now 87 years old, moves about the serenely scenic Czech town of Terezin, infamous site of the "model ghetto" Theresienstadt, a holding pen for Czech and Austrian Jews before they were shipped off to Auschwitz. Brainchild of the notorious Adolf Eichmann, the town was gussied up to be filmed as a benign, even cultured living space to fool the visiting Danish Red Cross.

Clocking in at a trim (for Lanzmann) four hours, The Last of the Unjust re-examines the role of the so-called Jewish Elders — community leaders dragooned by the Nazis to help implement the destruction of their own people — in the town's deceptive embellishment. Reviled as collaborators by their own people, almost all were executed as soon as they had outlived their usefulness.

Of Theresienstadt's three Jewish leaders, only one survived: Benjamin Murmelstein, a Viennese rabbi and university professor who fought and bargained with Eichmann for years to save 121,000 Jews from deportation and death, and to prevent the ghetto from liquidation. Branded a traitor by (among others) the eminent scholar Gershom Scholem (who called for him to be hanged), Murmelstein was arrested by the Czechs after the war.

Acquitted of all charges, he never went to Israel to face a second trial. Instead he settled into a lonely exile in Rome, where Lanzmann, intending to use his testimony in Shoah, tracked him down in 1975. Their weeklong conversation — a rambling discourse between two logorrheic obsessives — may be one of the most gripping outtakes ever to become its own movie.

Short, squat and vibrantly pugnacious, Murmelstein at age 70 is a dazzling raconteur, more than ready for his close-up and ravenous for the chance to make his case. With astounding recall and little mercy for himself or others — it's a stretch to picture this combative intellectual as a rabbi dispensing pastoral care — Murmelstein describes himself as a combination Scheherazade and Sancho Panza, saving himself and other Jews with a wily brew of pragmatic accommodation and brazen storytelling.

To Murmelstein, heroic stands were worse than useless under the heel of men like Eichmann — a corrupt despot, in his depiction, who bore no resemblance to Hannah Arendt's famous dismissal of him at his Jerusalem trial as a banal bureaucrat. Neither does Murmelstein conflate victimhood with nobility: He cites corruption and favoritism in the Jewish Councils without flinching.

At heart Murmelstein is a realist about human limitation, and remarkably philosophical about his excommunication from Jewish life. Lanzmann clearly sees The Last of the Unjust as an act of rehabilitation, and one cannot but be moved when, toward the end of their time together, Murmelstein asks for permission to call a man he has spent a scant few days with "my dear friend."

Murmelstein died in Rome in 1989, and having witnessed the terrible dilemmas he suffered and the mass rescues he pulled off, we can only be glad that he escaped the snap judgments of the social-media age. Were he here to come out of hiding today, the Twitterverse would go berserk, with opinionators casting strident votes about whether he was hero or traitor, victim or oppressor. Such encamped polarities would have horrified both him and the filmmaker who has brought him back to painful life. (Recommended)