Accessibility links
Behind The Movie, Tales From The Real-Life 'Monuments Men' George Clooney anchors a thriller about a celebrated military unit that worked to recover and protect precious art and artifacts during the chaos at the end of World War II. NPR's Joel Rose reports on the mission — and some of the surviving members. 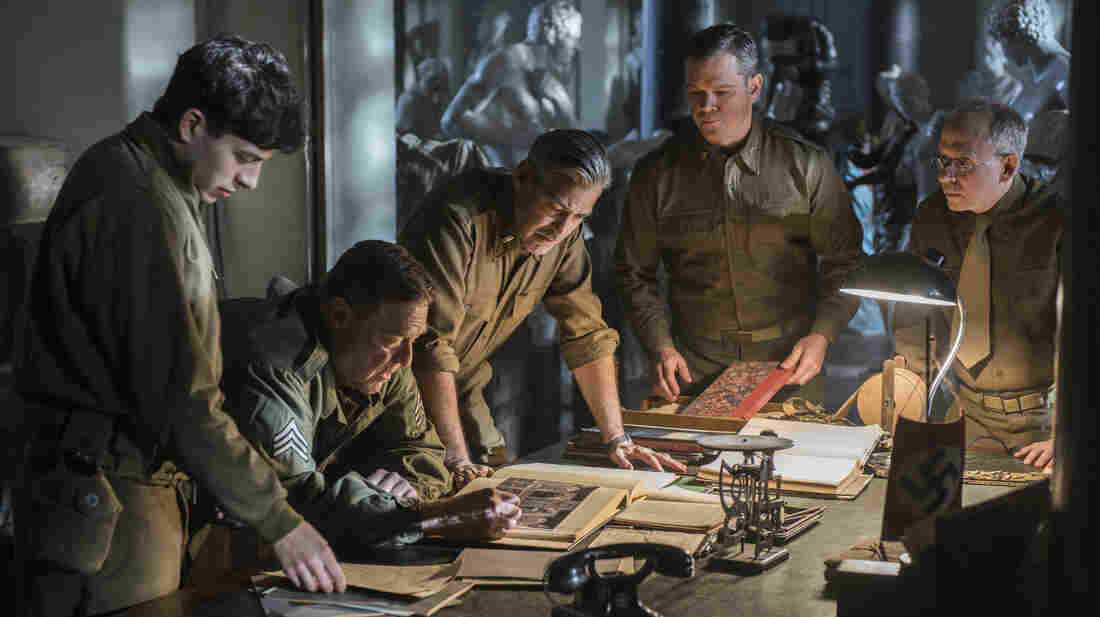 It's not often that a big-budget Hollywood film turns its attention to art historians and curators. But that's the subject of The Monuments Men, opening this weekend at a multiplex near you.

George Clooney stars in and directs the story, about a special group of soldiers tasked with protecting the masterpieces of European culture during the chaos of World War II and its aftermath. But as you might expect, the real story of the Monuments Men — and women — is messier and less glamorous than the Hollywood version. 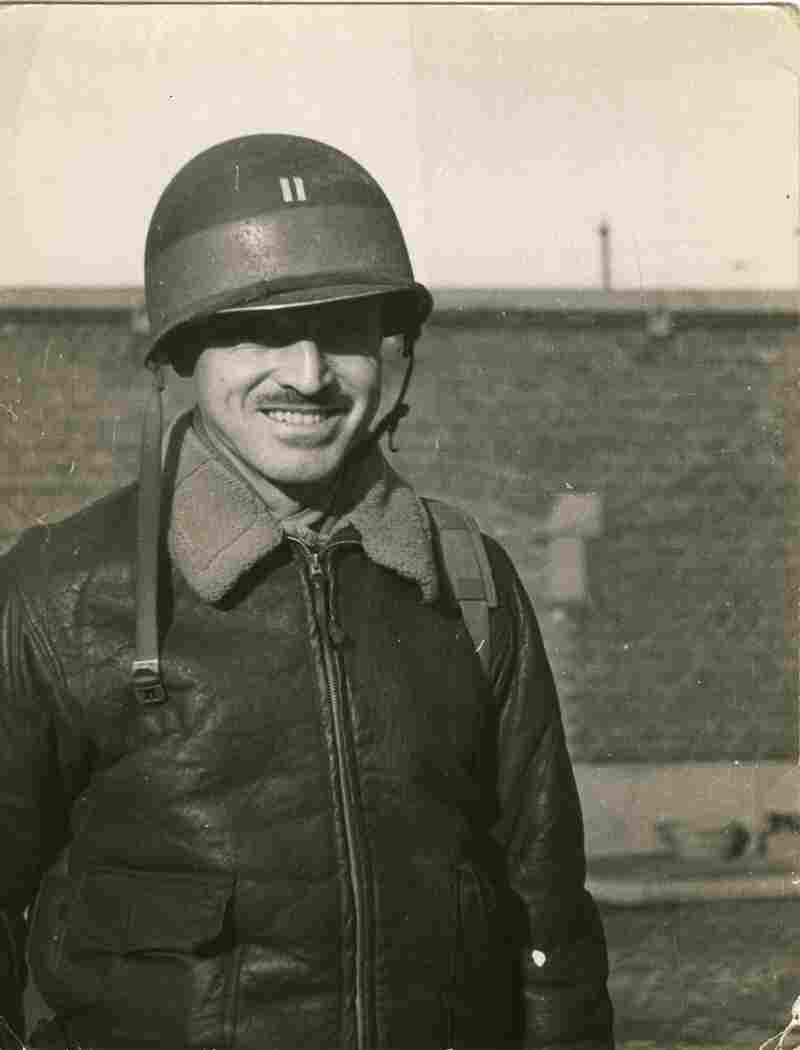 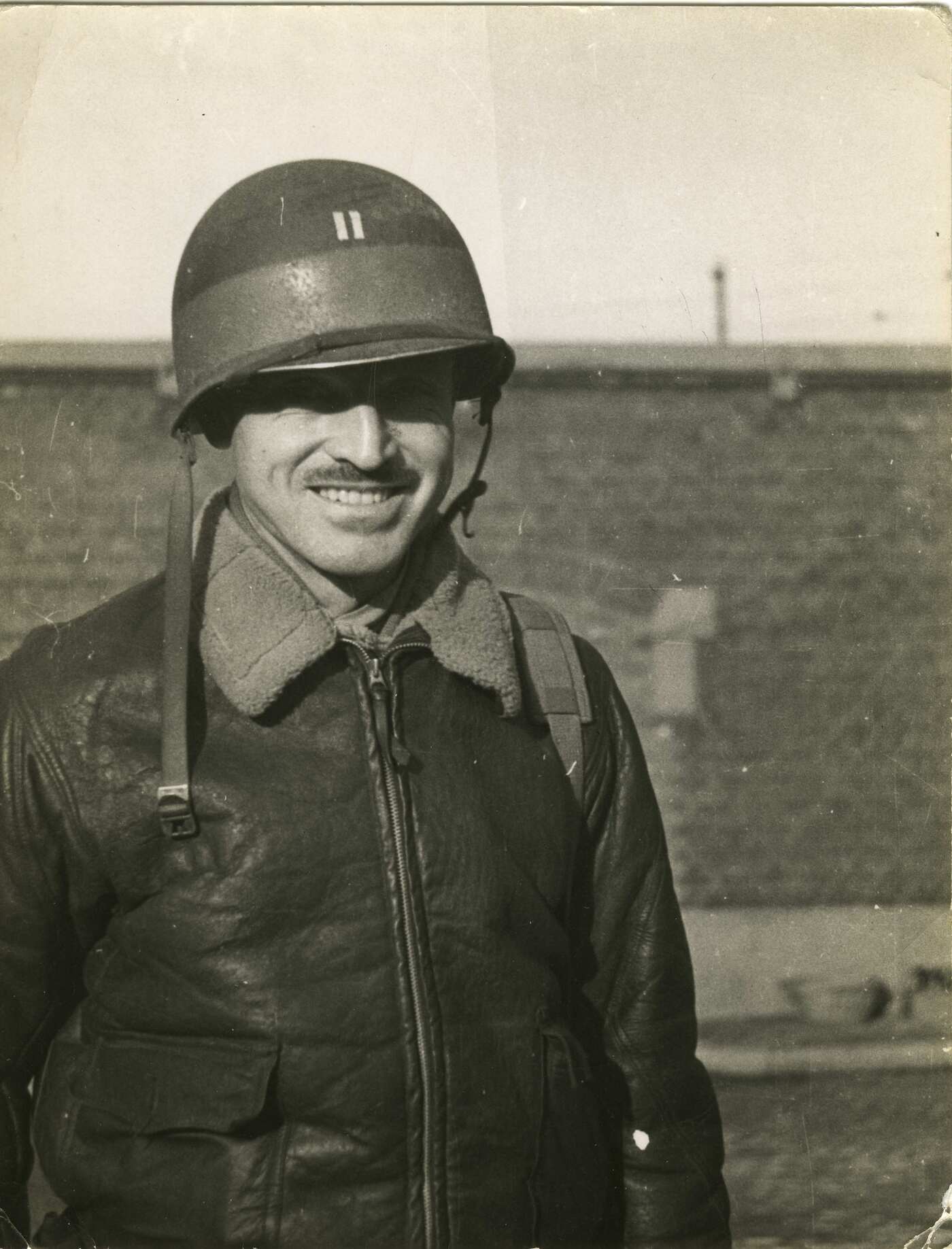 George Stout, pictured here at age 47, is the art-conservation expert who inspired the character Clooney plays.

George Stout, the real-life conservator and museum director who helped start the Monuments Men, is the basis for Clooney's character — who explains in the film why the team's mission is a critical one: "You can wipe out a generation of people. You can burn their homes to the ground, and somehow they'll still come back. But if you destroy their achievements, and their history, then it's like they never existed."

That part of the story is true, as far as it goes. The Nazis stole artwork on a scale like no one before or since. They plundered museums and churches across Europe and seized works from Jewish collectors. In response, the U.S. created the Monuments, Fine Arts and Archives section of the military — better known as the Monuments Men.

Charles Parkhurst, its deputy chief, was featured in the documentary The Rape of Europa, released a year before he died in 2008.

"There was lots of German art hidden where they thought it would be safe during the fighting," Parkhurst said in the documentary. "And it was our duty to search, and find, and save."

Harry Ettlinger, now 88 and living in New Jersey, was born in Germany but fled with his parents when Hitler came to power. Drafted into the Army in 1944, he wound up in the Monuments Men in part because he could speak German. That's how Ettlinger found himself hundreds of feet below ground in a salt mine in southern Germany, sifting through 40,000 cases of artworks that the Nazis had stored there for safekeeping.

"It became part of my job to actually take the case, and ... have it brought to the surface," he says. 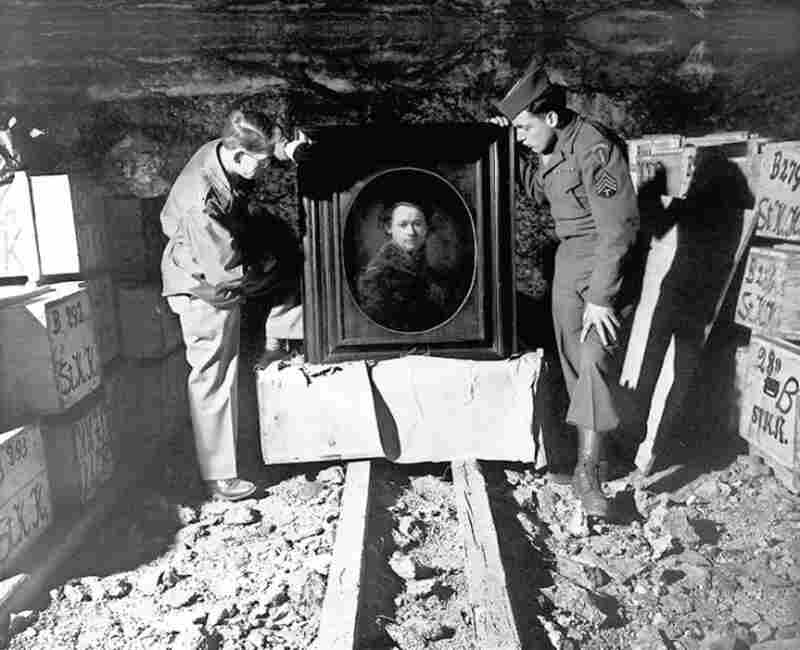 Sgt. Harry Ettlinger (right) and Lt. Dale Ford were among the Monuments Men who, in 1945, helped repatriate a Rembrandt found among a trove of art in a German salt mine. National Archives and Records Administration hide caption 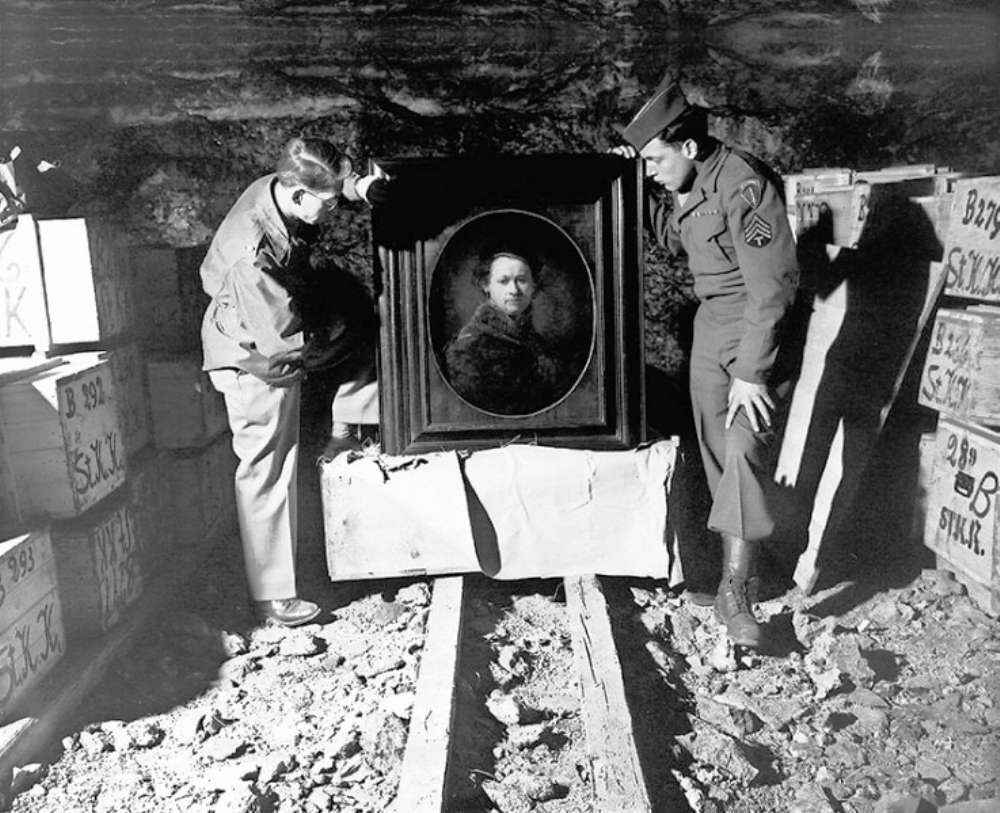 Sgt. Harry Ettlinger (right) and Lt. Dale Ford were among the Monuments Men who, in 1945, helped repatriate a Rembrandt found among a trove of art in a German salt mine.

The Nazis stashed art across Europe — even, as one vintage newsreel noted, in the famous castle at Neuschwanstein, where a great part of the stolen treasures was hoarded.

"It took us a year to empty that castle," Parkhurst told the makers of The Rape of Europa. "Forty-nine train-car loads; that's a lot. All packed tightly."

Parkhurst said the Monuments Men did the best they could, and without much help.

"We were charged with much more than we could encompass," he said. "We had no trucks, no jeeps. Nothing but our shoes. And no support of any kind from officialdom."

To make the job even harder, Allied bombing had left Germany in shambles. Anne Olivier Bell, who served in the British counterpart to the Monuments Men, remembers that one major hurdle was "the telephones — they didn't work. It'd take half a day to get through to Hamburg."

Bell, now 97 and living in the south of England, went on to make a name for herself as the editor of Virginia Woolf's diaries. But she still recalls her work in the British occupied zone after the war, when simply driving from one town to another was a major undertaking.

"Conditions were very bad in Germany at that period, and the cars were always breaking down, or a driver didn't come," she says. "So a lot of my time was wasted — or not wasted, [but spent] doing all these trivial but necessary things. You could say it was boring sort of work. And it was necessary. But on the whole, rather dull."

Allied forces had to figure out which artworks and objects should go back to museums and which belonged in private collections. Under the chaotic circumstances, the Monuments Men focused on returning the most famous and valuable works. But critics say that strategy accounted for just a fraction of what the Nazis and their collaborators had plundered.

"Let's put it this way," says historian Marc Masurovsky: "It leaves out 90 percent of what was stolen. I mean, that's part of the story."

Masurovsky, the founder of the Holocaust Art Restitution Project, says that after the war mountains of stolen and misplaced property were piling up at Allied collecting points across Europe. And the Monuments Men simply lacked the resources to settle disputes about who owned what. 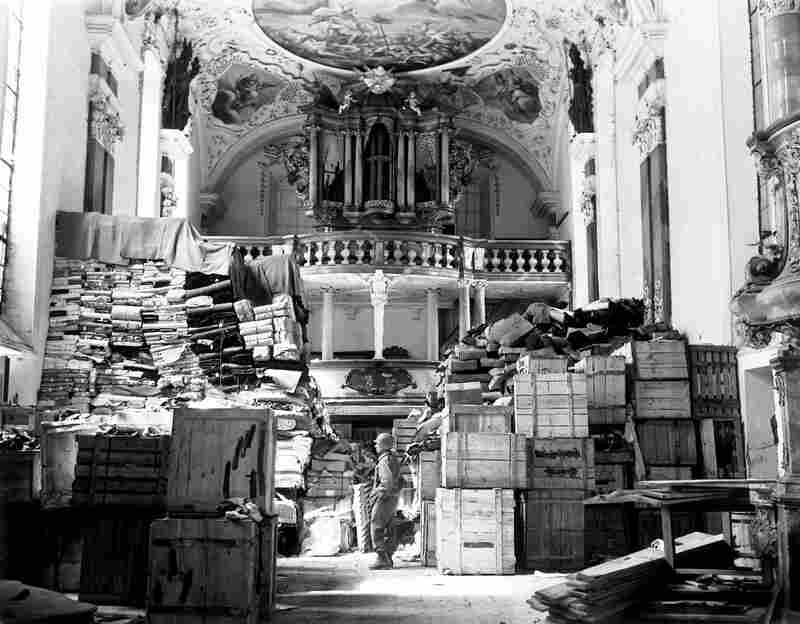 The Nazis used everything from mines to palaces to churches — like this one in the city of Ellingen -- to stash everything from stolen art to the regime's records. National Archives and Records Administration hide caption 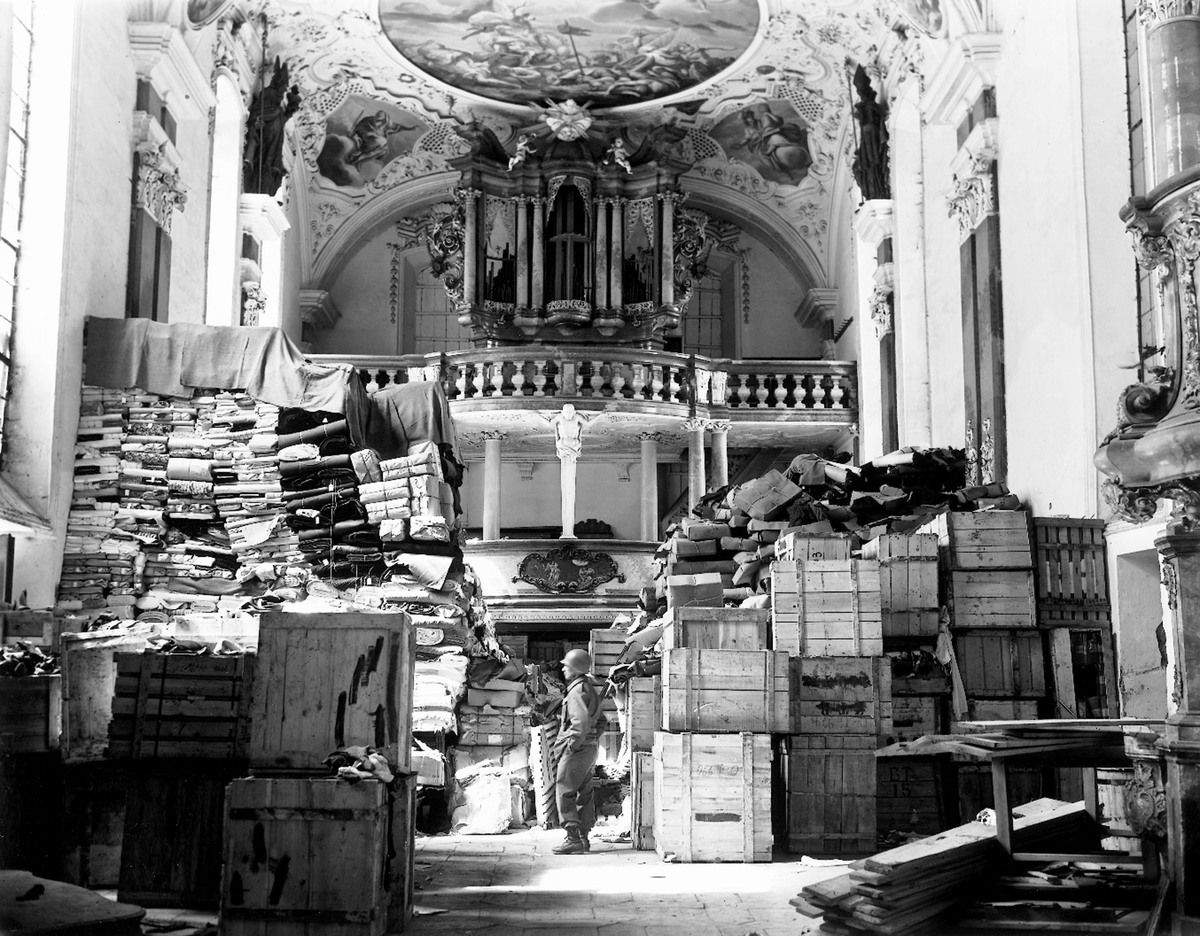 "They had a task, which was to clean up this mess," he says. "But also the other task that really needs to be remembered is that they were there to rehabilitate. In other words, to help the Germans put themselves back together culturally. So they went out of their way to help reopen museums; they organized exhibits."

To do that, the Monuments Men had to work quickly and rely on local experts. And in some cases, they made mistakes.

One high-profile case involved a huge collection of modern art — more than 1,000 pieces, including works by Picasso, Matisse and Chagal — worth more than 1 billion euros. It was discovered in 2012 in the Munich apartment of Cornelius Gurlitt, whose father, Hildebrand, was an art dealer who collaborated with the Nazis.

Gurlitt says his father acquired the artworks legally. And U.S. records show that a number of the works found recently in Munich were seized by Allied forces — but later returned to Hildebrand Gurlitt. Historian Masurovsky believes this was not the only time the Monuments Men let stolen objects slip through their fingers.

"There were a lot of things that basically were left by the wayside," he says. "And in that sense, they did not do their job. It's really not disparaging their work — I'm not saying that at all. I think they were not properly equipped."

Admirers of the Monuments Men say those mistakes should not tarnish the rest of what they accomplished. Real-life Monuments Man Ettlinger says the effort to return major works of art to their rightful owners went a long way toward earning the trust of the German people.

"I've always said that what we did was very unusual, something that the average American ought to be very proud of — that instead of stealing things, we returned it, which is something that had never been done before."

And Ettlinger is happy to see Hollywood taking notice.