Accessibility links
A Reggae Romp For The Family, With Marley's Music At Heart NPR's Audie Cornish talks to Cedella Marley about her new off-Broadway musical, Three Little Birds. It's adapted from her children's book — which itself was inspired by the song written by her father, the late reggae superstar Bob Marley. 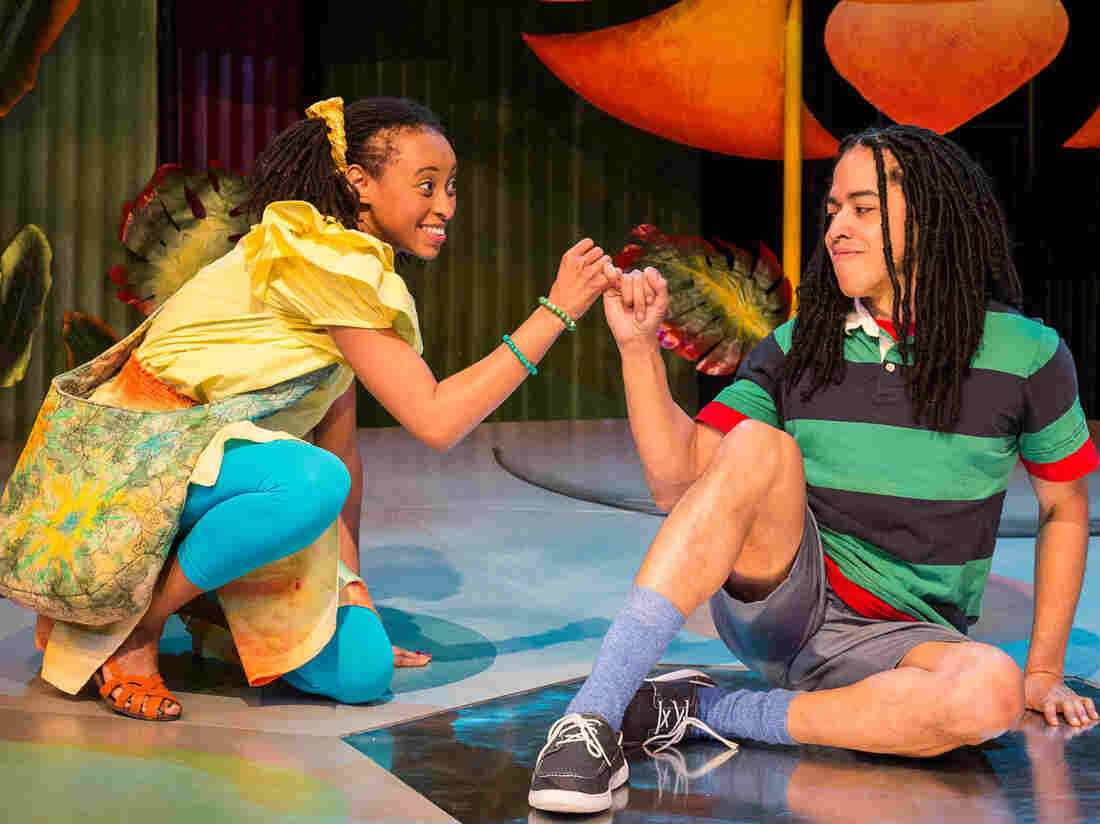 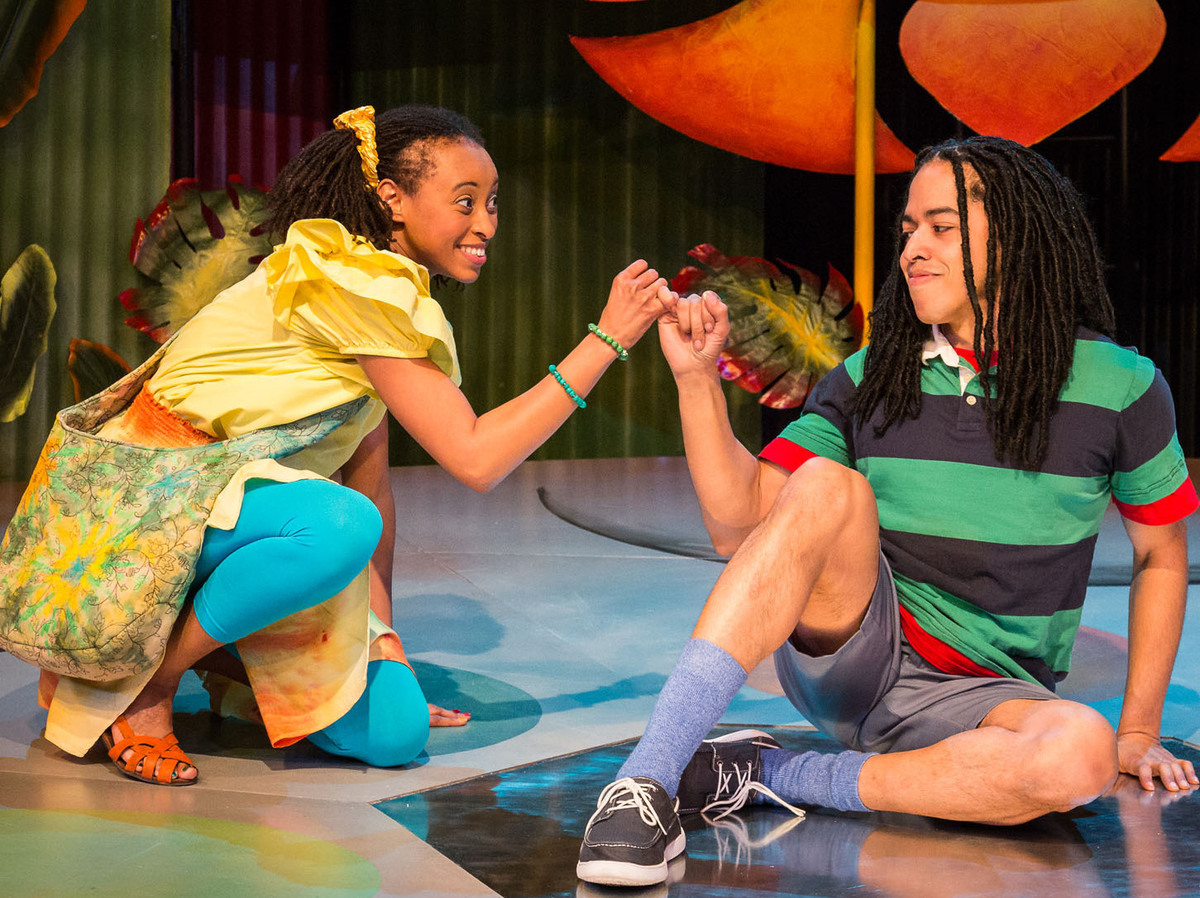 Jamaican superstar Bob Marley once sang about "Reggae on Broadway" — and now, more than four decades after the release of that song, some of Marley's greatest hits have been incorporated into an off-Broadway musical for children called Three Little Birds. The musical, based on a children's book by Marley's daughter Cedella Marley, opens today at Manhattan's New Victory Theater.

NPR's Audie Cornish spoke with Cedella Marley, who is also CEO of her father's record label, Tuff Gong International, about the show, plus what the song means to her and what it was like growing up in the home of a counterculture icon.

On the main character in the musical

The musical tells the story of Ziggy, who is a shy boy who's more than happy just to stay home and watch television because he's really scared of what happens outside of his door. He has a few friends: Nansi and three little birds, who kind of try to convince him to come out of the house and enjoy Jamaica.

In my family, it's our happy song. It's a song that can wake up the kids in the morning and it's the same song that can soothe them to bed at night. What really inspired me too, with this song, is we see a lot of bullying happening now in schools, or even in colleges. And I have three sons, and one of them was actually a victim of bullying. This song actually even helped him, because you come home in the evening and you just had like the worst day of your life — or you think it was the worst day of your life — and just singing "Don't worry. Every little thing's gonna be all right."

It's uplifting. It helped to raise his spirits. And he's off to college. So I must say I have to give thanks for every little thing for helping us when we were going through that issue with our own children.

And that's what's cool about Dad's music, and about reggae music. Kids love reggae music. The beat is infectious, and Dad's music has the timeless message of hope, and liberation, and love and forgiveness. And so it's an honor to be able to even be bringing him into children's theater. So I know he's just smiling, because here we are in New York waiting for the opening. So happy birthday, Dad. You made it on Broadway.

On her strict upbringing

Oh, I think people think like we lived in this loosey-goosey, marijuana-infused, — I don't know — adobe house, or cottage. Where it was really, no, we're ... up at 6 o'clock to actually go jogging with our parents, come back and get ready and go to school. And then we had a lot of after-school programs. Whether it's dance class or singing lessons or just learning to sew or crochet.

Yeah, the weekends we could get away with anything, but from Monday to Friday it's strictly down to business. I mean, we had fun, you know. We had fun. But ... I don't think it's what people are thinking. We weren't like some Jamaican hippies just living off the land and walking around barefoot.

On protecting her father's legacy

It's just to clean up what has been going on for decades. And we have been for 30 years. We've been trying to clean up all of the bootlegging and the trademark infringement. So we do a lot of legal work, which is not fun. And then it's even to try and work with these people who have been doing it for years, and just say: "You know what? In order to protect our trademark, can you just come and get a license?"

So we've had to find various ways of getting to the same result, because you can't fight with everybody. So it makes sense sometimes for you to just look at them and say, "You know what? I know you've been bootlegging this t-shirt for 20-odd years. Come in, get a license, so we can do it properly, so it's at the standards we want it to be at."

[They] feel that they can monetize [Marley's image], and feel like Bob would want them to do that. You know, you get those hardcore people that say, "No, but Bob came to me in a vision and said it was OK." Really? Well until he gives me that vision, I'm gonna tell you right now, it's not OK. But it's what we were cut out to do, and we will do it because it's just protecting Dad and his legacy.

On her favorite Bob Marley cover

Oh, man. Annie Lennox did one. If you listen to Annie Lennox's version of "Waiting In Vain," you're gonna fall in love with it. I love when Lauryn [Hill] does it; I love when my brothers do it, when a lot of people do it. But when Annie Lennox does it, it tugs at my heart. It's like I feel something. I feel a little heebie-jeebies.