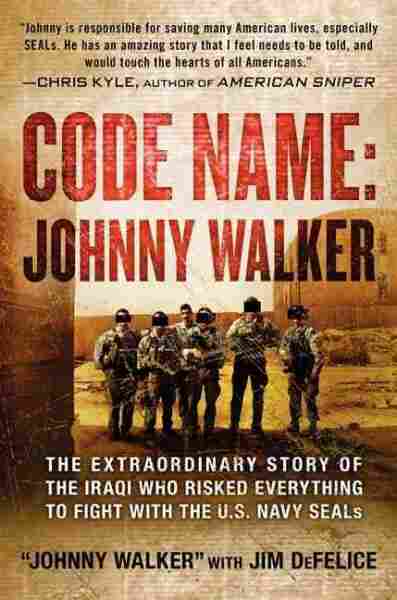 The Extraordinary Story of the Iraqi Who Risked Everything to Fight With the U.S. Navy Seals

by Johnny Walker and Jim DeFelice

Title
Code Name: Johnny Walker
Subtitle
The Extraordinary Story of the Iraqi Who Risked Everything to Fight With the U.S. Navy Seals
Author
Johnny Walker and Jim DeFelice

For years, Johnny Walker interpreted for the U.S. Navy SEALs on missions all over his home country of Iraq. He served on over a thousand missions, and stood out as an invaluable part of nearly every team he worked with.

No, Johnny Walker isn't his real name. The SEALs gave him the nickname in honor of his love of Johnnie Walker Whisky — and to protect his identity, a necessary precaution even today.

"Bad guys, if they hear your real name, they can find you," he tells NPR's Arun Rath.

But before the war, the special ops missions and the American pseudonym, Walker was just a normal guy living in the city of Mosul in northern Iraq.

He was picking up part-time work as a truck driver when the U.S. Army came to his country. In the new occupying forces, Walker saw an opportunity for a job and a steady paycheck for his family.

For weeks, Walker went from military base to military base, looking for a job. He finally got lucky and picked up work with the military police, quickly making a name for himself as a capable interpreter. It wasn't long before an elite unit of Navy SEALs hired him on.

"The best part of having Johnny along was knowing the people, knowing the culture," says Louis Lastra, one of the SEALs who went on missions with Walker.

"A lot of the interpreters were great when we were teaching the Iraqi troops, but when we actually would go outside the wire on operations, Johnny didn't have the fear factor some of the other ones had," Lastra says, "and we knew that even physically he could hang with us."

Missions with the Navy SEALs were demanding and dangerous, but the threat of violence didn't stop there. As the war dragged on, Iraqis working with Americans became targets.

One day, a letter showed up at Walker's house. Inside the envelope was a single bullet. He started carrying an AK-47 for protection. 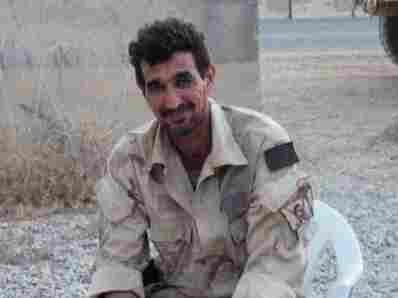 "Johnny Walker" is the code name of the Iraqi translator who worked with U.S. Navy SEALs. Courtesy of HarperCollins hide caption

Walker was driving alone one day when he noticed two men in a car following him. He tried to drive away, but they followed closely and opened fire, riddling his car with bullets. With no other options, Walker stopped the car and shot back with his AK-47, killing them both.

When a crowd gathered around the wreckage and people asked what had happened, Walker lied. He told them he killed the two men because they worked for Americans. "Allahu akbar," said a face in the crowd. God is great. Satisfied, the people dispersed.

In 2006, the mounting danger became too much for Walker and his family. He applied for a U.S. visa under a special program for people who faced a clear threat in Iraq because of their affiliation with Americans.

Even though Walker's visa had the support of military leaders, he and his family weren't cleared to come to the U.S. until 2009.

Today, he lives in California and works as a cultural adviser for the SEALs. Thanks to support from his old comrades, Walker and his family are settling into their new home and are on track to become official U.S. citizens this July.