Accessibility links
For Military Couples, It's A Long Recovery 'When We Get Home' Kayla Williams and Brian McGough met in Iraq in 2003. Williams' new memoir, Plenty of Time When We Get Home, describes their homecoming after McGough suffered physical and cognitive injuries in an IED explosion. 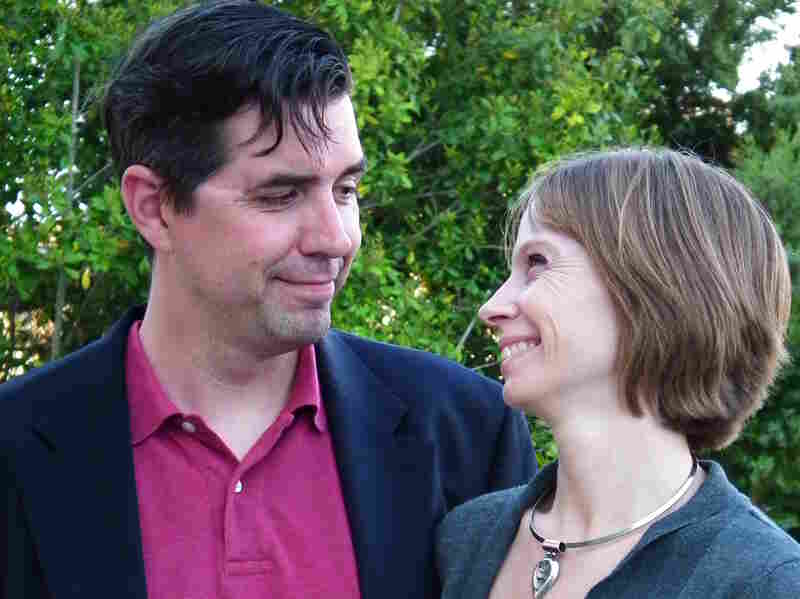 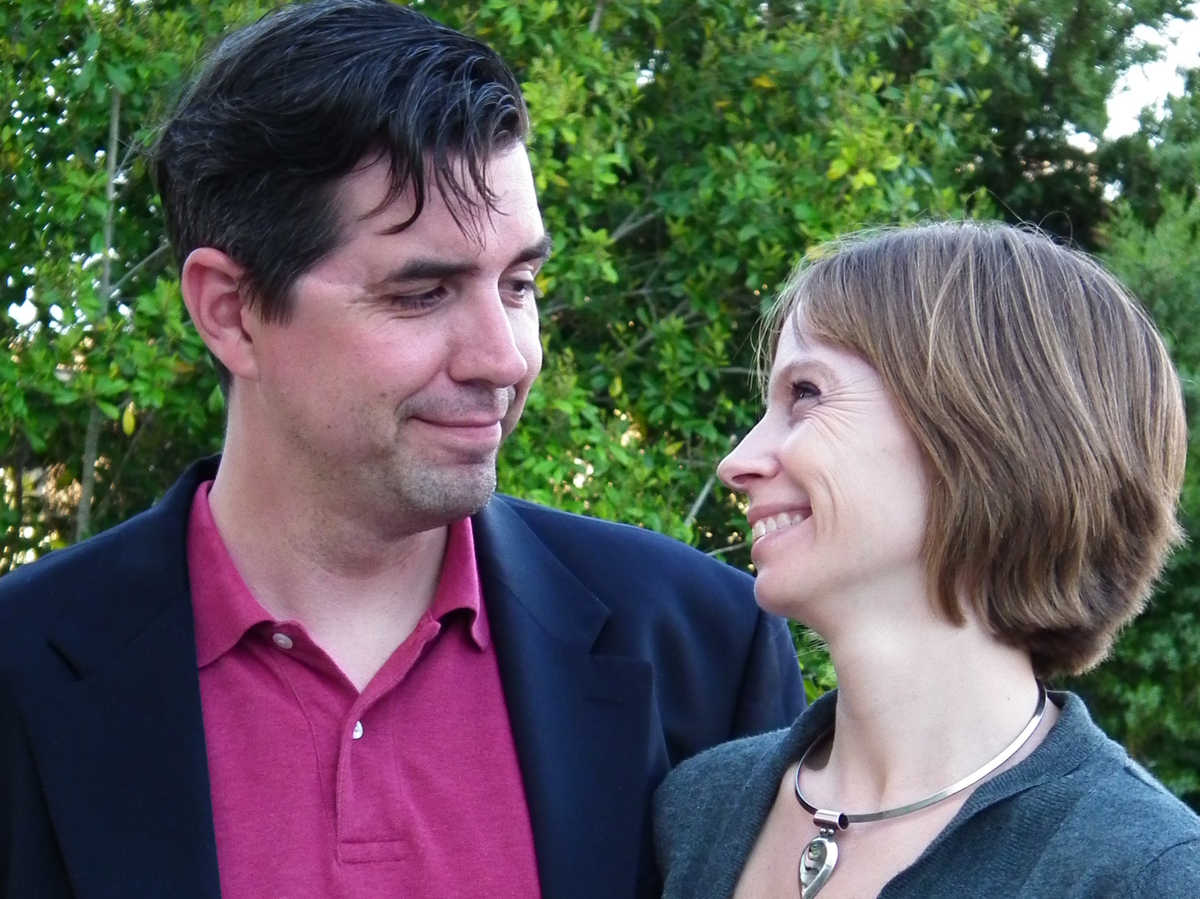 Brian McGough and Kayla Williams met in Iraq in 2003.

Kayla Williams and Brian McGough met in Iraq in 2003, when they were serving in the 101st Airborne Division. She was an Arabic linguist; he was a staff sergeant who had earned a Bronze Star. In October of that year, at a time when they were becoming close but not yet seeing each other, McGough was on a bus in a military convoy when an IED went off, blowing out the front door and window.

"Essentially a piece of shrapnel went through the back of my head, burrowed the skull from the back of my head past my ear, out through where my eye is, and while doing this it also ripped some brain matter out," McGough tells Fresh Air's Terry Gross.

He was left with physical and cognitive problems he's still recovering from, as well as post-traumatic stress disorder. He has experienced periods of depression, paranoia and rage.

Williams and McGough started seeing each other early in his recovery, after they had returned to the U.S. They've stayed together in spite of the obstacles, including the rages that he directed at her. They married in 2005, just days before she went on a book tour to promote her memoir, Love My Rifle More Than You, about being a young woman in the Army serving in Iraq. Now she has a new memoir about her relationship with her husband, Plenty of Time When We Get Home: Love and Recovery in the Aftermath of War. 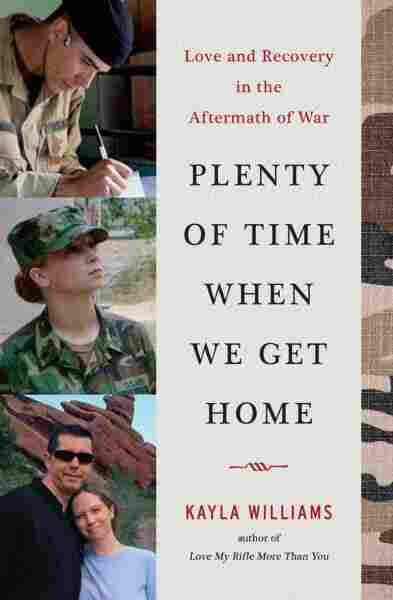 Plenty Of Time When We Get Home

Love and Recovery in the Aftermath of War

On how McGough's injury changed his behavior

Williams: He wasn't paying his bills. He would get notices that his electricity was about to be shut off or his water was about to be shut off because when he would get a paycheck he would spend it all within three or four days. The executive functioning part of his brain had been damaged, and so he would just buy a new computer, buy rounds of beers for everybody at the bar, and his entire paycheck would be gone within days.

He was a staff sergeant — he was a leader who was used to planning and executing multiday missions, supporting multiple troops in a combat zone — so for him to go from being able to handle that level of responsibility to suddenly not being able to even pay his own bills, I knew something was wrong.

Somebody who had lived in his house while he was gone had moved out and turned the electricity off but not unloaded the refrigerator, and the refrigerator was full of rotten, molding food and Brian just ignored it. He just left the refrigerator closed and didn't do anything about it. There was a family of mice living in the refrigerator. Little clues like that, [and] I'm like, "Wow, something is seriously wrong that he's letting things like this go and not handling them."

On choosing to stay together

Williams: At the very beginning I think I didn't understand. And then I fell in love with him, and by the time I started to understand what it really meant, I was already pretty deeply in. But there were a lot of times that I contemplated running away from it. I realized way later that I was doing things to bind myself to him to make it harder to run away if I got freaked out, or scared, and wanted to leave. So getting married and then buying a house together, these were things that I was doing to make it harder to run away when things got hard — because there were some really hard times, but I had this faith that we would be able to pull through, and I just kept convincing myself that he would get better. I didn't have any evidence on which to hang that hope, but through luck or perseverance or some combination of things, that did turn out to be the case.

On being aware of the changes

McGough: I went from [being] kind of a very, very high-functioning individual to a high-functioning individual. A lot of people see me and [would] be like, "Oh, I could never tell you had a brain injury." But I know. I know what I used to be like. I know how I used to be able to pick things up, learn something new and stick with it and be able to master it quickly. I don't have that ability now. ... I have to read things a few times to kind of remember them. But at the same time, I just started reading again, probably two years ago. For a long time, I couldn't read. It sounds kind of silly but ... I would read a chapter and be like, "What did I just read? What just happened?"

On going into "code black"

Williams: If he knew it was coming, he would say "code black" and just not talk to me for a few days until it would pass. But there were other times when things did get bad. I could always tell that it was going to get ugly when first he would switch from drinking just beer to drinking hard liquor, doing shots. That was an indicator that things might go bad. The clue always was when his face would just flatten. It was like the shades being pulled. He would go from having a more expressive face to just complete coldness and he would say, "You don't understand. You'll never understand." And that was when I knew some switch had flipped in his head and he had crossed over into a level of rage or something that he couldn't control anymore.

I decided that rather than go on, I would rather be dead, and I asked him to kill me. And he put a gun to my head and pulled the trigger. It was not loaded, and he threw the gun away and called me crazy, and I left.

We had had a lot of terrible arguments when he was in these "code black" moments, and I'd say the very, very worst incident was ... I had locked myself in the bedroom and he was throwing himself at the door. And I thought, "I just — I can't go on like this. I can't imagine trying to live the rest of my life not knowing when this moment will happen." Not knowing if it's going to be safe. Thinking I can't have children because I don't know if one of these rages will happen. And I decided that rather than go on, I would rather be dead, and I asked him to kill me. And he put a gun to my head and pulled the trigger. It was not loaded, and he threw the gun away and called me crazy, and I left. And that night was the lowest point in our relationship, and it ended up being the turning point in our relationship.

On living with PTSD

McGough: You have to kind of get in the frame of mind that in my mind — and I can't control this, and I have to kind of fight with this every day — every small, slight or minor transgression is amplified by anywhere from like 10 to 20. So for instance, if you cut me off in traffic, that is almost like if somebody were to ram their car into you. That's how my brain responds to things — it amps things up. So when I was put in that situation, my brain kind of took over and just went to work in a way that shouldn't have happened. There was alcohol involved and a lot of emotions, and something we're very fortunate that nothing bad happened, nothing worse happened, and it worked out the way it did. ...

In times of crisis I'm great. ... My preferred state is the "Oh my God crisis."

Women In War: 'I've Lived Out There With The Guys'

Kayla Williams: 'Love My Rifle More Than You'

Williams: It's a classic PTSD response in a lot of ways. ... A lot of what we think of as symptoms of PTSD are adaptive in a combat zone. So being hypervigilant, extremely alert to your surroundings, always monitoring your environment for potential threats and being prepared to respond with immediate violence if necessary if you perceive a threat — those are adaptive ways to be in a combat zone. Those traits keep you alive in a combat zone, and it's normal for anyone coming home to take awhile to wind that down. ...

I still feel my heart rate increase if I see trash on the side of the road because there's a little piece of my brain that thinks it could be an IED. But for the vast majority of people, those fairly normal symptoms fade within three to six months after coming home. But for people like Brian with pretty severe PTSD, that fading of those symptoms doesn't happen, and those normal ways to behave or think or be in a combat zone carry over into civilian settings where they're actively counterproductive.

More On Returning From War

'Operation Homecoming': The Writings of War