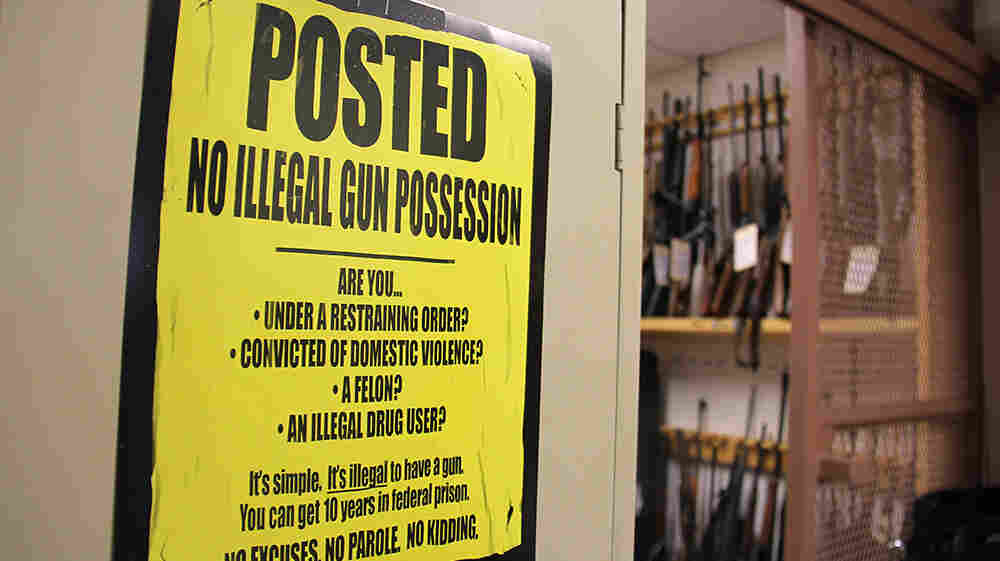 An evidence locker at the Vermont field office of the Bureau of Alcohol, Tobacco, Firearms and Explosives is filled with confiscated guns. Taylor Dobbs/VPR hide caption

In Vermont, opiate addiction is the high-profile focus of Gov. Peter Shumlin's latest set of policy initiatives. But the state's addiction problem has led to another dangerous issue:

Vermont's loose gun laws and a high demand for drugs make a lucrative market for drug dealers who accept guns in return for the drugs they sell.

Because no law enforcement agency keeps track of guns specifically traded for drugs, no one knows exactly how many guns are involved in trades like this nationwide. But the Vermont field office of the Bureau of Alcohol, Tobacco, Firearms and Explosives (ATF), whose caseload mostly involves interstate or international gun trafficking, has seen it happen over and over.

"It's not so much just firearms trafficking to make a profit [off the guns themselves]," says Jim Mostyn, resident agent in the Vermont ATF field office. "What we're seeing is the narcotics for the guns."

Tristram Coffin, the U.S. attorney for Vermont, also says his office often sees the direct exchange of guns for drugs.

Part of the reason drug dealers accept guns as payment is because they know those guns can sell for a steep markup on the black market, says Mostyn.

"It's a supply-and-demand scenario," he says.

One woman illegally bought handguns in Vermont for about $400, then traded them to a drug dealer in Massachusetts in exchange for $500 to $700 of crack cocaine, he says. Bringing guns to surrounding states like Massachusetts, Connecticut and New York, and even Canada, can get dealers a big return.

"These guns get a higher value in [surrounding] states because they're harder to come by," says Mostyn.

The state is largely Democratic but has a strong tradition of shooting sports, so the politics of gun control are complicated. An assault weapons ban proposed after the Newtown killings, for example, was withdrawn after an outpouring of grass-roots and legislative opposition.

That opposition came from people like Ed Cutler, president of Gun Owners of Vermont, a pro-gun advocacy group. At the Central Vermont Gun Show last weekend, he sat under a banner that read, "Dedicated to a no-compromise position on gun control."

But Cutler agrees with a wide array of state officials on another issue: Rather than tightening up on gun sales in Vermont, they've rededicated their efforts to slowing the demand for drugs.

"Locking up a user is not helping anything," says Cutler. "Lock up a drug dealer, help the user."

Shumlin has announced $10 million in state funding for addiction treatment programs and a $10 million federal grant for prevention counseling. The new funding is aimed at keeping cash — and guns — out of drug dealers' hands.