Accessibility links
Book Review: 'The Letters Of Robert Frost' A new volume of Robert Frost's collected, unexpurgated letters reveals that the poet thought a great deal about how people read him — and was hurt when his modernist friends didn't approve of his raw, sincere style. Reviewer J.P. O'Malley says the collection gives readers greater insight into Frost the poet and Frost the man. 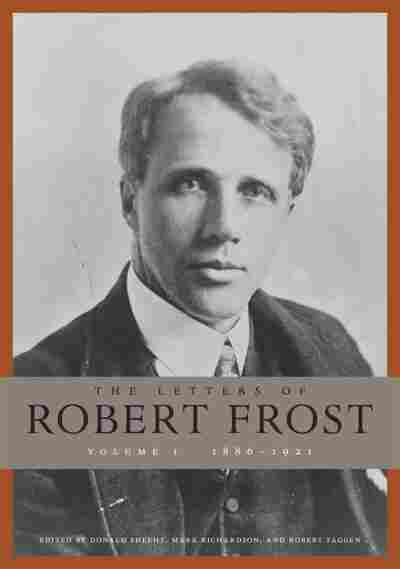 On July 4, 1913, Robert Frost wrote to his good friend John Bartlett, describing his strengths as a poet: "To be perfectly frank with you I am one of the most notable craftsmen of my time. ... I alone of English writers have consciously set myself to make music out of what I may call the sound of sense."

Frost was 39 years old when he wrote those words. Despite the hubristic and self-assured tone, he had published one book of poetry, A Boy's Will, and was relatively unknown in literary circles.

Unlike his contemporaries — such as W.B. Yeats, Ezra Pound, Wallace Stevens and T.S. Eliot — Frost never produced a significant body of literary criticism on his own work. But it's clear from this collection of correspondence that he cared about how his audience should read him.

That is what makes The Letters of Robert Frost, Volume 1: 1886-1920 such a joy to read. Frost's Selected Letters were previously published in 1964. But this is the first time a complete version of them — running in chronological order — has been made available.

Frost saw these noble exchanges almost like an art form: one where he could deconstruct his own work, and the work of others, with precision and intellectual rigor. The bulk of letters contained in this volume were written between 1912 and 1920. Through them, we get a deep insight into Frost's views on: the mechanics of poetry; politics; the art of conversation; and the importance of structure and syntax in language.

Many readers of Frost's work dismiss his cognitive order, dramatic tension and extreme clarity as a kind of plain-minded simplicity. This misunderstanding may arise because he was writing at a time when modernism — which favored introspection, free verse and abstract images — was extremely popular.

We can see from these letters that Frost was sensitive to the opinions of the more modernist poets. In a letter dated March 11, 1913, he wrote, "Yeats [told] my dazzling friend Ezra Pound that my book was the best thing that has come out of America for some time."

But Pound could be quite critical of Frost's work. Reviewing his debut book in Poetry in 1913, Pound claimed Frost's writing style was too raw and sincere.

In October of that same year, clearly hurt by those comments, Frost wrote: "Pound is an incredible ass and he hurts more than he helps."

As the first world war progressed, life became increasingly difficult for Frost, who by then was living in England. His friend and fellow poet Edward Thomas was killed fighting in the trenches of France. And long bouts of illness, as well as financial difficulty, made these years of hardship even more painful.

Frost's letters from this period show him developing political opinions of insight, prescience and clarity as the old European order crumbled around him. Writing to Louis Untermeyer in August 1917, Frost claimed that "[this war] will be to the end what it was in the beginning, a struggle for commercial supremacy between nations."

While remaining a keen Democrat his whole life, Frost eventually became suspicious of the social activism that was present in New Deal politics. He felt that liberalism lacked men of conviction, and in that same correspondence to Untermeyer, he says taking a stance in an argument is important for one's character, writing: "What I love best in man is definiteness of position. ... My God how I adore some people who stand right out in history with distinct meaning."

Though his letters show him as a vigorous political debater, Frost felt that art was truly the only way to understand human affairs. These letters give us greater insight into Frost the poet, and Frost the man, and they are a fitting testament to his exceptional work ethic as a writer. Anyone interested in the laborious process an artist must undertake to perfect his craft will read this book with awe and fascination, and as a constant source of inspiration.

Read an excerpt of The Letters of Robert Frost