Accessibility links
Movie Review - 'The Returned' - A Zombie Plague, But It's Covered By Your Health Plan The Returned posits a viral epidemic that, 20-odd years on, has proven treatable, allowing those who survive zombie attacks to remain human as long as they're on medication. But what to do when drug supplies run low — and "anti-returned" factions get nervous?

A Zombie Plague, But It's Covered By Your Health Plan

A Zombie Plague, But It's Covered By Your Health Plan 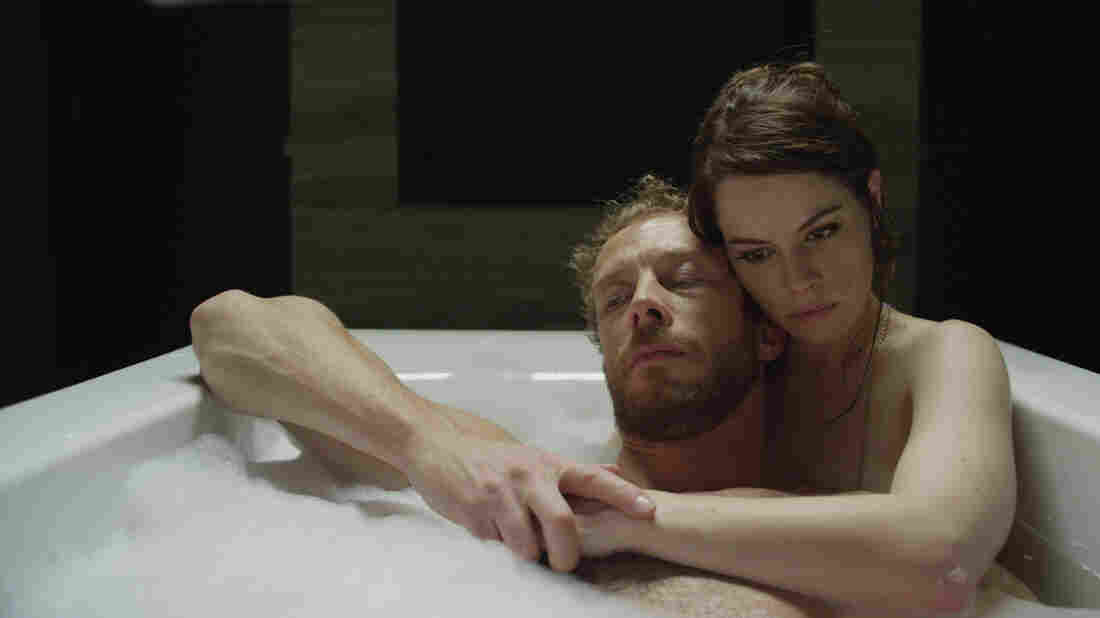 Kate (Emily Hampshire) treats the victims of zombie attacks — among them her husband, Alex (Kris Holden-Reid), in a world where medication can keep the zombie-bitten human, but supplies may be running low. levelFILM hide caption

Manuel Carballo's The Returned — not to be confused with the French miniseries that aired in the U.S. last year — serves in some ways as an unofficial sequel to World War Z. If the latter repurposed the zombie movie as medical thriller, looking at the walking dead as victims of an epidemic in search of a cure, The Returned wonders how we would cope if a treatment existed — if we knew that men and women walk among us, just one missed drug dose away from turning again into one of the undead.

The movie takes place around two decades after the initial outbreak of the zombie virus, in an era when people who catch the illness can still hope for the possibility of a normal life. Those who have been attacked by zombies and lived to tell about it are the titular "returned"; they require a daily injection to keep their disease at bay. And with rumors spreading that supplies are running dangerously low, they face increasing discrimination from "anti-returned" groups who fear a new onslaught of ravenous zombies.

"These people are time bombs. ... They're a menace," says a member of the anti-returned at one point, going on to suggest that the returned be separated from the rest of the population, forced to live in compounds.

That remark comes in the middle of a speech given by Kate (Emily Hampshire), a doctor who treats victims of zombie attacks. Her husband, Alex (Kris Holden-Reid), is himself one of the returned, and Kate has been secretly purchasing and stashing drugs for him while working on a research team trying to find a permanent cure for the disease.

Such a view of the returned as patients living with a disease that can be treated but not cured makes an HIV comparison pretty much inescapable — particularly once we learn that the original zombie epidemic occurred, in this fable, in the 1980s. The rhetoric espoused by the anti-returned groups also has a plain real-world corollary: It's been appropriated wholesale from anti-immigrant arguments currently flourishing in Europe.

Such a symbolic and politically charged scenario gives The Returned a distinguishing profile within an oversaturated genre, allowing for more varied sources of menace than in the typical zombie movie; the possibility of anti-returned violence against Alex and others like him haunts the film as much as the risk of a new zombie outbreak.

But the broad thematic scope also hampers The Returned, which has to manage with a midlevel budget. After setting up the suspense of potential social upheaval — of calamitous events like those seen in World War Z or, in a different context, Children of Men — Carballo has the resources to show us only a few sparsely attended protests and a couple of bloodthirsty zombies. The chaos that we hear reported on characters' radios never gets displayed on screen, so what begins as suspense becomes a case of falsely heightened expectations.

Eventually, the film settles into a story more suited to its means, focusing largely on Kate's and Alex's attempts to secure more medication and escape violent persecution. Even in these quieter moments, there are still stumbling blocks. The dialogue can be comically clichéd: "It was just a scratch," Alex says of how he became one of the returned, "but sometimes small things grow." Pivotal scenes dive too deep into melodrama, and there's something inevitably sterile about a script that includes only scenes that propel the plot or provide obvious foreshadowing.

Nevertheless, discovering Alex and Kate's tender relationship and witnessing their fight for survival as the world collapses around them is ultimately more moving than the film's attempts to tackle social ills. Zombies are a versatile source for metaphor, whether they represent a deadened consumerist society, a victimized minority or a worldwide medical disaster. In The Returned, they serve best as an unseen peril, one that's growing inside Alex and threatening to undo his and Kate's enviable existence.