Accessibility links
NASA's On Alert For Big Scary Asteroids. What About Smaller Ones? NASA has reactivated a mothballed spacecraft to look for big objects that might strike Earth. It's part of an increased effort to find potential hazards — but some scientists sizing up the sky think we should try harder. 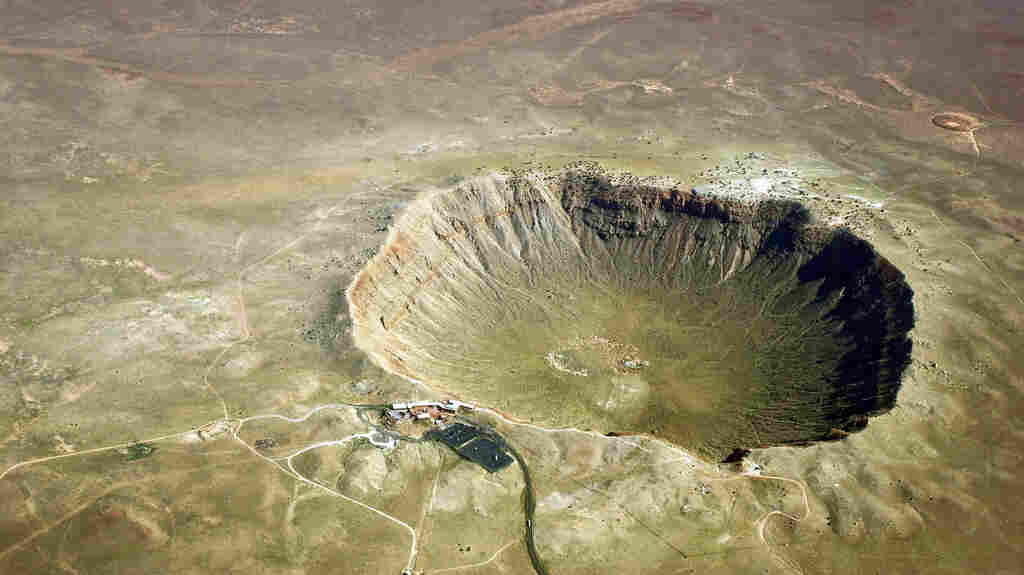 About 50,000 years ago, a meteorite struck earth east of present-day Flagstaff, leaving this crater as its calling card. Shane.torgerson/Wikimedia Commons hide caption 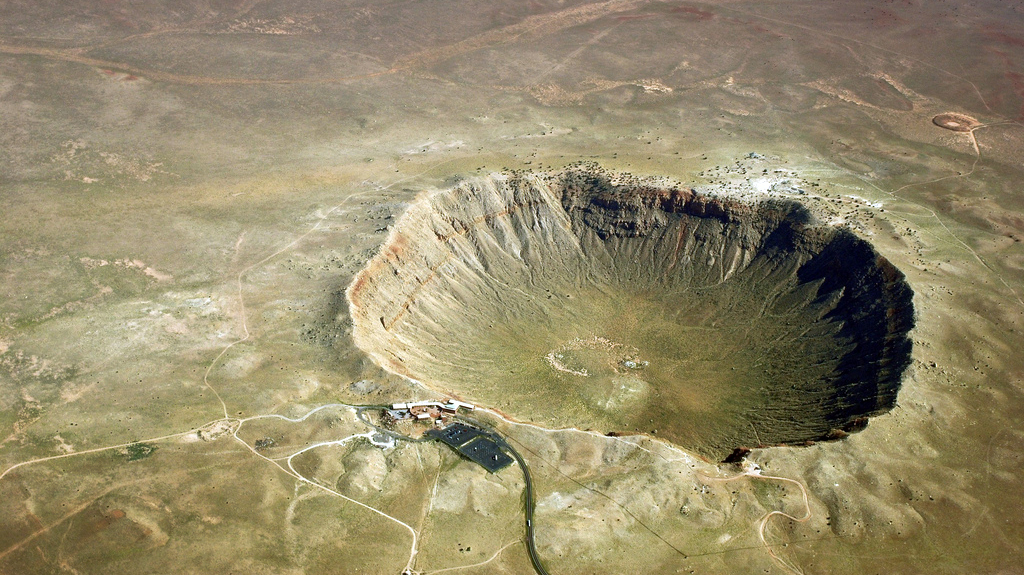 About 50,000 years ago, a meteorite struck earth east of present-day Flagstaff, leaving this crater as its calling card.

Earth is under constant bombardment from asteroids and comets. A recent reminder of that occurred one year ago today when an asteroid plunged into Earth's atmosphere, exploding over the Russian city of Chelyabinsk with the force of a 500 kiloton bomb, causing widespread damage and injuries.

Scientists used dozens of videos from dashboard cams to triangulate the path of the meteor that exploded over Russia last year.

Right now, most of these objects — including the asteroid that burst over Chelyabinsk — arrive without warning. Most cause nothing more than a streak in the sky as they burn up in the atmosphere. But since some can be dangerous, NASA and other federal agencies have concluded it's time to adopt the Boy Scout motto: Be prepared!

Maureen Dowd Fears The Cosmos, Should You?

Part of being prepared is knowing what's out there. Trouble is, asteroids that may strike Earth, even big ones, can be hard to spot.

But you can spot them if you happen to have an infrared telescope in space. Amy Mainzer, an astronomer at NASA' Jet Propulsion Laboratory in Pasadena, happens to have one of those at her disposal.

"Instead of seeing sunlight reflecting off their surfaces, we're actually seeing the heat that they give off," says Mainzer, who is also principal investigator for a spacecraft called WISE (for Wild-field Infrared Survey Explorer). "We see them glow, essentially."

Even though space is a cold place, asteroids that come near Earth are warm. "They're orbiting the sun at roughly the same distance as the Earth," Mainzer says. "So they absorb sunlight, and the sunlight warms them up."

NASA had actually shut WISE off in 2011 when its main infrared detectors ran out of the coolant they needed to work properly. But WISE has other detectors that are good enough to spot nearby asteroids, so NASA decided to switch it back on. Now it's called Near Earth Object WISE, or NEOWISE.

Mainzer says the reawakened satellite started hunting for asteroids just before last Christmas. "Basically six days after we started taking survey data, we found our first new asteroid," she says. "And that was pretty exciting."

Right now, the job of keeping track of all the stuff that might hit Earth falls to the International Astronomical Union Minor Planet Center.

Timothy Spahr directs the center. He says NEOWISE helps with the asteroid hunt in many ways.

"One of them is that there will be a few additional discoveries on near-Earth objects," says Spahr. But more important, he says, is that an infrared telescope can tell you how big an object is. "Getting the actual size of objects in space is notoriously difficult — and effectively impossible from ground-based surveys. And so having a space-based infrared telescope provides information that we simply don't get any other way."

Obviously the big objects are the ones that could cause the most damage. But Mark Boslough thinks it would be a good idea to keep track of the smaller objects, too.

Boslough is a physicist at the Sandia National Laboratory in Albuquerque, and an expert on asteroid impacts.

He'd like to see an early warning system for asteroids that might hit Earth, he says, something like what the National Hurricane Center uses to keep an eye out for dangerous storms.

"I would propose a very similar system," he says, "where you have a survey to look at the sky, look for small objects, even small enough to not do any damage whatsoever. And you find these in advance (hours, days, weeks in advance), and you issue the appropriate warning."

Now, an early warning about a Texas-sized asteroid that's going to destroy all life on Earth may not be all that helpful. But knowing about a smaller object could be. Boslough says the Chelyabinsk experience a year ago is an example.

"If we had discovered that in advance, we could have issued a warning, and we could have probably saved thousands of people from getting injured," he says. The biggest chunk of that object exploded about 20 miles up, so it didn't cause direct damage, but it did create a huge shock wave. Boslough says there's simple advice to prevent injuries in that sort of instance.

"You just tell people to stay away from windows," says. And there were thousands of people. There were over a thousand people that were injured — some very seriously — from flying glass."

Such an early warning system would be expensive. But Boslough thinks it would be worth it, in the long run.