Accessibility links
Antihero Or Villain? In 'House Of Cards,' It's Hard To Tell The second season of Netflix's political drama will be released on Friday, providing a new dose of bad behavior from Francis Underwood. Antiheroes are popular on TV right now — think Breaking Bad, The Walking Dead, Sons of Anarchy and The Blacklist. But Eric Deggans wonders just how bad is too bad. 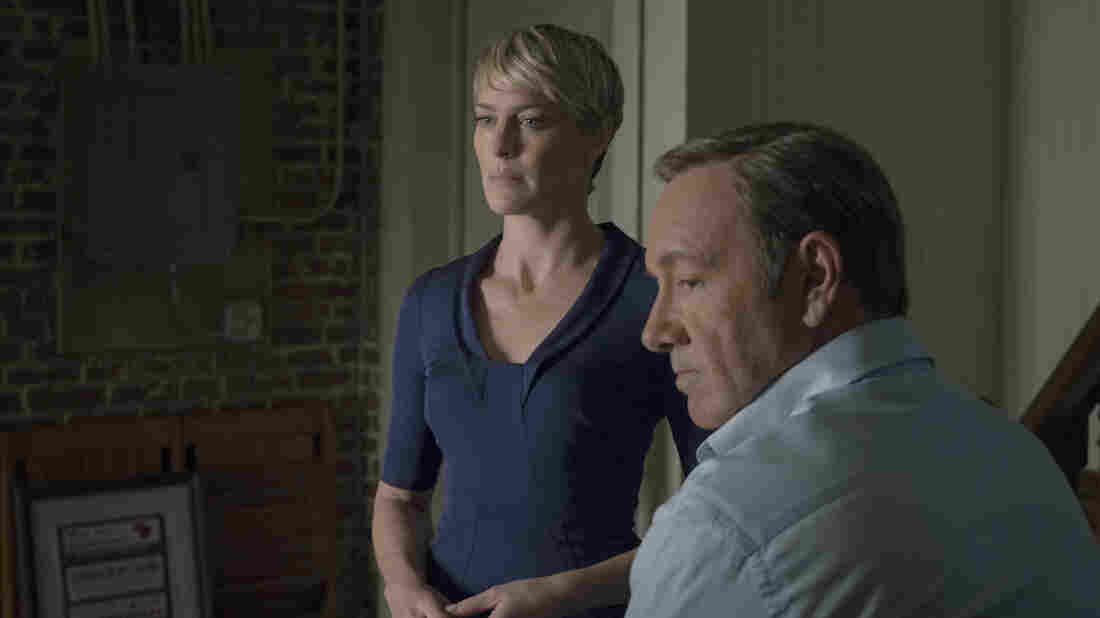 Robin Wright and Kevin Spacey play Claire and Francis Underwood in Netflix's House of Cards. When the second season is released on Friday, audiences can expect to see more ruthless behavior from these power-hungry characters — but are they antiheroes, or plain old villains? Nathaniel E. Bell/Courtesy of Netflix hide caption 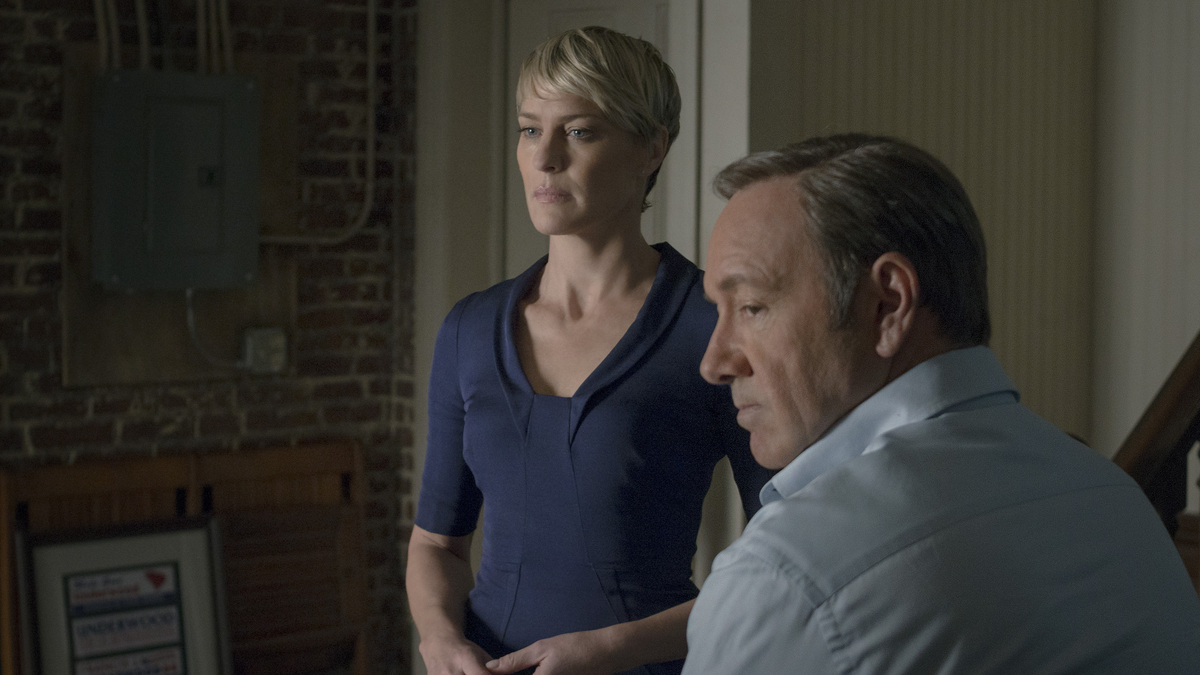 Robin Wright and Kevin Spacey play Claire and Francis Underwood in Netflix's House of Cards. When the second season is released on Friday, audiences can expect to see more ruthless behavior from these power-hungry characters — but are they antiheroes, or plain old villains?

[Editor's Note: This piece references plot points from the first season of House of Cards. If you've been waiting a year to binge-watch it, consider this your spoiler alert.]

When Netflix's groundbreaking online series House of Cards releases its second season to the world Friday — unleashing 13 new episodes about a wily congressman willing to kill to reach the vice presidency — fans will get more than another jolt of TV's most addictive political drama.

They'll also see a series that's redefining just how bad a television antihero can be.

The action centers on Oscar-winner Kevin Spacey's silky smooth Francis Underwood, a Democrat from South Carolina who blends velvety charm and mesmerizing menace like no other character on television.

In the show's second season, his measured, honey-coated drawl even makes a conversation about elevating a junior congresswoman into his old job somehow sound like a veiled threat and comforting promise all at once.

"What if I suggested that you could serve in leadership this term ... to replace me as [House majority] whip?" Underwood coos to Jacqueline Sharp, a third-term congresswoman from California played by Molly Parker (Deadwood; The Firm).

More On 'House Of Cards'

'House Of Cards' A Delicate Balance Of Politics And Drama

'House Of Cards' A Delicate Balance Of Politics And Drama

Moments later, he offers files filled with damaging information on her opponents for the position, noting dryly "there's one on you ... you might want to begin by reading that one, first."

That's Underwood: Even as he helps an ally, he reminds that person how much he can hurt her.

Last year, when we met Underwood in the first scene of House of Cards' first episode, he was killing a dog that had just been hit by a car in his neighborhood.

"Moments like this require someone who will act ... do the unpleasant thing. The necessary thing," he told the camera, while killing the dog with his bare hands before anyone else could see.

It was ruthless, chilling and casual.

Later, he turned that casual ruthlessness on a former ally — well, he was more like a patsy — who drunkenly vowed to reveal Underwood's shady moves in helping him run a doomed campaign for governor of Pennsylvania (it was all part of a plan to push the current vice president into entering that race, so Underwood could take his job).

The patsy was an alcoholic, so Underwood got him to drink while they sat in a parked car. "I don't want you to feel any pain tonight," he said, handing his patsy a bottle of liquor. "I won't judge you. Hell, I'll even join you."

And when his patsy fell asleep, the good congressman started the car, closed the garage door and walked away.

That killing was a transformation, changing Underwood from an antihero into a straight-up villain.

The Decade At The Movies

'The Americans': When You're Rooting For The Bad Guy

And it offered a jarring question for fans: Can you still sympathize with a guy who deliberately murdered an innocent person?

TV has fixated on antiheroes for years. But the most popular ones have something that redeems them and explains their bad behavior.

On FX's biker drama The Sons of Anarchy, the killer motorcycle club has a strict code of loyalty that feels like a family bond. Breaking Bad's meth-making high school teacher initially needed his nefarious side business to fund his own cancer treatments.

And who can forget mob boss Tony Soprano trying to justify his life of crime to his suspicious daughter, Meadow, by assuring her "everything I do and everything I've done and everything I will do, it's all for you and your mother, you know that?" (The expression on Meadow's face showed she wasn't buying it.)

But Underwood challenges that formula. Particularly in the first episode of this second season, where he does something so awful, you'll wonder why you ever rooted for him in the first place (as Time magazine TV critic James Poniewozik suggests, if you don't want to be spoiled, stay off social media on Friday until you see the episode. It's that shocking).

And he's not alone in his ruthlessness. Underwood's wife, played by Robin Wright as a model of emotionless cool, shakes off her indecision from last season and gets her hands dirty, too — delivering a blistering comeuppance to an old boyfriend on national TV and protecting her nonprofit by threatening a pregnant woman.

House of Cards this season seems to dare us to stay invested in these awful people, because they're the only ones who matter. They scramble for money and power in a Washington that is strangely more functional than the real-life version. Here, they can actually pass a sweeping education bill and hold a vote on tweaking a key element of Social Security.

Yes, it's a fictional Washington filled with conniving schemers who still, somehow, seem unable to predict Underwood's ambitious machinations. But if you can swallow that improbability — and Underwood's lack of a real adversary has always been a bit of a weakness for the show — then you are likely to enjoy the new episodes to come.

Like Shakespeare's Richard III, House of Cards entices us with its lead character's bad deeds, then refuses to tell us how we should feel once we've seen them.

But the scariest revelation of all is that we're so excited by this antihero turned villain in the first place.