Accessibility links
The Ebony Fashion Fair: Changing History On The Catwalk For 50 years, Ebony magazine's Fashion Fair toured the country. The models knew how to captivate from the catwalk, helping fashion the dreams of the black women who flocked to their shows.

The Johnson Publishing Company, and its flagship publication, Ebony Magazine, helped to fashion the black middle-class in America for five decades. For 50 years, from 1958 until 2009, the Ebony Fashion Fair traversed the country.

The coast-to-coast show was a pageant of haute couture that created aspirations wherever it went. It was a rite of passage for black women, who flocked to it. The show also raised $55 million for African-American charities, like the United Negro College Fund or sickle-cell anemia research.

Over its history, the Ebony Fashion Fair changed the lives of those on both sides of the catwalk, and it changed America.

Growing up in gritty Compton, Calif., Paula Bond used to wonder, "can anything good ever come out of here?" Well, she did. The daughter of a single mother, Bond was the first black woman crowned Miss California International in 1979. Ebony put her on its cover, and then, in the Fashion Fair.

"Here I am on the runway, wearing these gowns that cost thousands and thousands of dollars, this little black girl," Bond says. "In my mind, the gowns that I wore on that runway cost more than a used car my mom was ever able to afford when we were growing up."

Faye Moseley was a six-foot track star from Jackson, Miss., and a 23-year-old single mom of a 4-year-old. She was in the Fashion Fair in 1983. She had the legs, and they loved her on the runway.

"I tended to wear things that were see-through and that were short," Moseley says. "You wore your most over-the-top fashion garment because you could, and then when the show started you were mesmerized. You never left your seat because you were afraid that you would miss a one-of-a-kind garment."

From splashy big city venues to high school gyms in tiny whistle stops, the young models traveled by bus — with seats removed for their long legs — all over the country and throughout the Jim Crow South.

In the early '60s, the Fashion Fair was in Jackson, Miss. One season, a young woman from Vicksburg named Del (Neely) Handy was with them.

"It almost felt like steam coming up from the pavement. You could just feel it," Handy says. "Our name was on our bus at one time ... Ebony Fashion Fair. And I remember them taking our name off the bus so as not to call attention."

But they were making history. In 1961, the models were invited to the White House through connections to the fair's then-director, Freda DeNight. Handy recalls that they unexpectedly met president John F. Kennedy. She remembers an elegant dinner in the White House with strawberry shortcake. 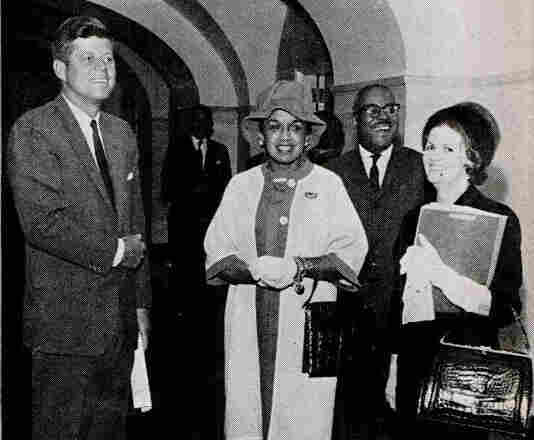 It was a little different from how the models would dine on the road; restaurants were off-limits. John H. Johnson, chairman of Johnson Publishing and Ebony's publisher, knew the models were aspirational figures, and he wanted them seen that way.

"Mr. Johnson had said that when we went down South that we could never go in the back door of the restaurant," Handy says. Instead, the white bus driver would go get takeout.

"So we ate on the bus," she says. "I would say ... all the way down through the South and up maybe as far as St. Louis, we didn't sit down to eat until we got to either Lincoln or Omaha, Nebraska."

Johnson and his wife, Eunice, were visionaries. They met and married in Chicago, where he worked in insurance and she earned a master's degree in social work. By 1945, they'd also created Ebony, and later Jet Magazine. Eunice Johnson, who was from a socially prominent family in Selma, loved fashion and style, and she used it for black self-empowerment.

"Her real driving force was education," says Linda Johnson Rice, Johnson Publishing CEO and the daughter of John and Eunice. "She just wanted to prove there was nothing you couldn't do; there was no barrier to black beauty. She would put the brightest yellow [or] brightest orange on the most dark-skinned model she had."

In his memoir, John H. Johnson writes that at first, Eunice Johnson had to "beg, persuade and threaten" European designers to sell high fashion to a black woman. But attitudes changed quickly, Linda says.

Certainly by acquiring 8,000 ensembles, Eunice Johnson was a top American purchaser of couture. A photograph of Johnson, probably taken in the 1980s, shows her in an embrace with iconic French designer Yves St. Laurent. But the financial outlay of the show was tremendous. Johnson Publishing announced in 2009 that it would have to cancel the show's fall season. A few months later, Eunice Johnson passed away at age 93.

"One of my favorite gowns in the whole show ... I call it the Rainbow Gown," Bivens says. "I'm not sure what Mr. B Michael would call it. It's really unique."

The Rainbow Gown was created by New York designer B Michael. Eunice Johnson promoted young black designers like Stephen Burrows, Patrick Kelly, Willi Smith, L'Amour, and many more. B Michael was designing hats for the TV show Dynasty when Eunice Johnson called, and it changed his life. She wanted to photograph one of his hats for Ebony.

He still remembers the hat. "It was a white sisal, which is like a linen-texture straw hat," he says. "And I think what she liked about it is that it really looked like a flying saucer. It was one of the things that I did, where I took the brim and reversed, the brim went up as opposed to down. I collared it with rhinestones and pearls; I remember it very well."

Today his company, b michael America, is a national brand at Macy's, and his couture has been seen on Cate Blanchett, Nancy Wilson and Beyonce.

For the black middle-class, and the black sororities and charities sponsoring the Fashion Fair, the pageant was the event of the year. In Washington, D.C., Tonya Talley-Smith and her mother and sister dressed to the nines and went every year, either to the Kennedy Center or a nearby country club, a tradition that began in 1968.

"We'd grown to a place where we had not been before, and not only that but we were beginning to go into stores that we had not been in to," Talley-Smith says. "And the style of the hair was beginning to change, even down to the color of your hosiery. Because back when I came along to get a pair of hose to match your skin, we had to dye them."

They dyed them by dipping them in coffee, she says.

A History Of Black Fashion On Display

The Johnsons may have been the first to bring haute couture to the black middle-class, but Maxine Craig, who teaches gender studies at the University of California, Davis, points out that the tradition of the black beauty pageant dates back to at least the late 19th century.

"Well Ringwood's Afro-American Journal of Fashion is one of the earliest black women's magazines, and we're going back to 1890s here," Craig says. She says Ebony and the Fashion Fair were all about racial aspirations.

"So Ebony would say something like, 'This season we will need cashmere sweaters because they're essential when you go on a cruise,'" she says. "Now most of the readership, if they were in the South, couldn't sit in the front of a bus much less go on a cruise."

At that time, Craig says, airlines refused to hire black stewardesses, but Ebony was showing models carrying Pan Am flight bags. She says they were letting black readers visualize where they will go.

"High fashion may be distant, but style is accessible. And it's your right to have it," she says.

Those rights became part of American life and so did the Fashion Fair. Ever more over-the-top with names like Fashion Scandal, Fashion Seduction and Fashion Sizzle, reflecting back the hugely vital way in which black Americans see themselves.

"When Mrs. Johnson started the show, we were colored," former model Paula Bond says. "We then evolved into Negroes. That was followed by: We were black. Say it loud, 'I'm black and I'm proud!' And then into being called African-Americans."

For her role in the Fashion Fair, former track star and model Faye Moseley was showered with attention in her hometown of Jackson, Miss., in the '80s.

"I was given a key to the city, I had a red carpet [and] they had a reception in my honor," Moseley says. "And to be exposed to something like that was really life-changing."

Both Moseley and Bond went on to the Paris runways, but today Moseley works for a Fortune 500 firm and Bond has her own Beverly Hills production company. Last summer, in Anaheim, Calif., they brought together 300 former Fashion Fair models for their first-ever reunion. Bond is making a documentary about the models, who she compares to the Tuskegee Airmen or the Negro Baseball League.

"I mean culturally, you know who African-Americans are. We have a certain energy, we like to do things with a certain flair," Bond says.

One disappointment Mosely and Bond share: They say they would have thought there would be a lot more black models on magazine covers by now.